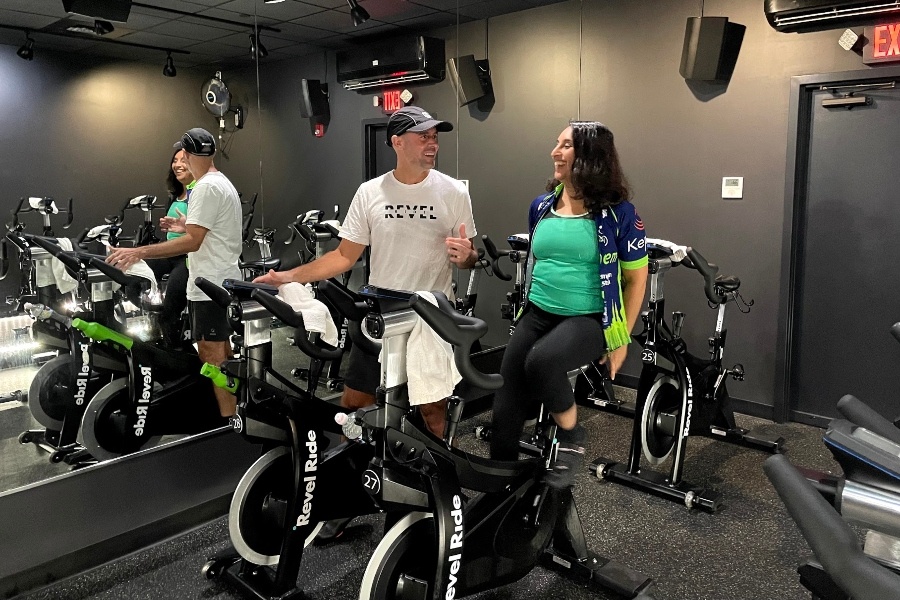 Local spinners Richard Brandon and Jasmin Sethi have been working together to make class at Revel Ride more accessible for Sethi, who is blind. / Photograph by Laura Brzyski.

Recent research has found that 81 percent of people living with disabilities do not feel welcome in fitness spaces.

These findings have prompted some action — Degree Deodorant launched #TrainersForHire, a campaign-database hybrid encouraging fitness brands to hire coaches living with disabilities, while Planet Fitness has announced they’ll be expanding their gym equipment to include accessible machines. SoulCycle’s Dedham, Massachusetts location recently began hosting biweekly classes with American Sign Language interpretation for riders who are deaf. And here in Philly, there are a bunch of athletic organizations focused on adaptive fitness.

But two local spin enthusiasts recognize more improvements can be made within gyms, and they’re taking matters into their own hands in order to make indoor cycling a little more accessible.

Why? Sethi lives with retinitis pigmentosa, a rare genetic disease that resulted in progressive vision loss from infancy through high school.

While this has not deterred Sethi from academic and professional accomplishments — she scored a perfect 1600 on her SATs, simultaneously completed both a Ph.D. and a J.D. from Harvard in six years total, and founded her own financial services consulting firm, Sethi Clarity Advisers — she has found that it has presented minor challenges when taking a fast-paced indoor cycling class, including knowing her rotations per minute (RPMs) and resistance, as well as hearing bike position changes over the music. 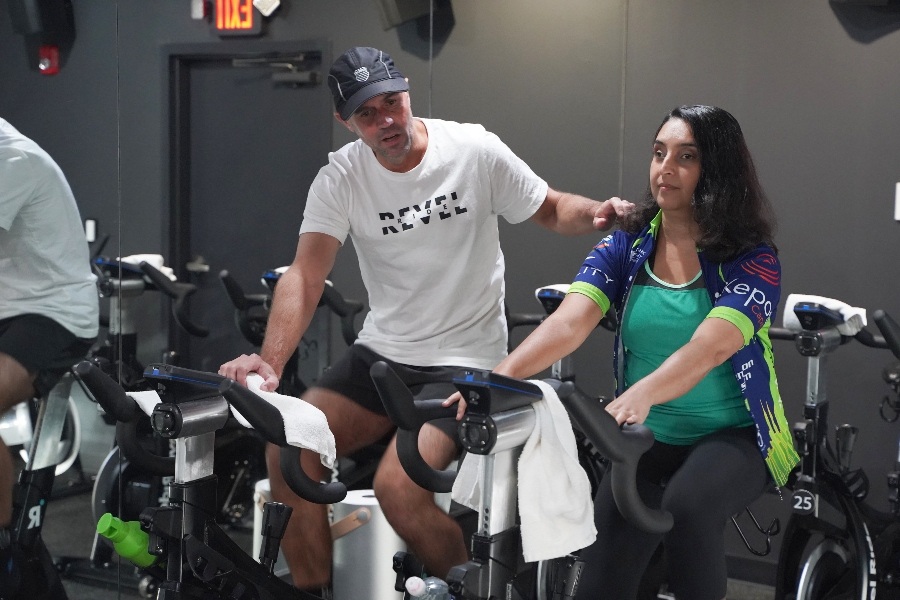 We chatted with Sethi and Brandon to find out more about their spinning “morse code,” as they call it, what they’ve learned from collaborating, and how they believe the local fitness industry could make mainstream workouts more accessible for all clients.

How did the two of you start working together?
Sethi: Exercise has always played a big role in my daily routine. When I moved from New York City to Philly last July, I found Elevate Health & Performance (which is where I go for my strength training) and Revel Ride, which I started going to once the studio reopened in March.

When I went to my first Revel class, I was basing my ride off how my body felt, because other spin studios I had been to didn’t have the computerized consoles that track things like your RPMs, resistance, and watts. I mentioned to Jamie [Promislo, owner of Revel Ride] one time pretty early on that it would be helpful to have someone to provide input on what my screen shows because I wanted to be held more accountable since I don’t have access to that feedback. I thought having someone assist me would help me get a better feel of, say, what 110 RPMs feels like, and then my muscles would start to remember over time.

Brandon: I’ve been riding at Revel pretty much since they first opened three years ago. When I saw Jasmin take her first ride at the studio, I thought, “Wow, that must be challenging” because spinning can be tough, even for someone who has their vision. So I mentioned to Jamie [Promislo] to let me know if Jasmin ever said she needed help with anything. One day, about four or five months ago, I arrived at the studio and Jamie told me Jasmin wanted to be held more accountable during class since she can’t see the metrics that appear on the console. I said I would absolutely help her, and we took it from there.

How did you know where to begin?
Brandon: I didn’t have a plan at first and I don’t have any kind of certification or training for doing something like this. But Jasmin and I worked together to create a few basic signals that would help guide her through her ride. We came up with this organically, beginning with a basic premise: Jasmin wanted to get better at spinning, but she couldn’t see the console. We built from there.

What are those signals?
Sethi: What we do is kind of like morse code. Richard is automating the screen to help me do what I’m supposed to do during class. If he sees that my RPMs are lower than they should be, he’ll tap my leg for more speed. If I look like I can handle more resistance, he’ll tap my arm.

Brandon: Exactly. The first two signals we implemented were my tapping her bicep for more resistance and tapping her thigh for more speed. We used only those two signals until she achieved her first goal of hitting 120 RPMs in class [with the designated resistance added]. As she progressed, we added more signaling to help her move around the bike more easily. There’s a layer of difficulty for her when it comes to changing positions, mainly if the cues are not clearly stated or loud enough over the music. So we came up with signals for where she should be on the bike: One finger at the base of her back for first position (in the saddle), two fingers in the middle of her back for second position (standing straight up), and three fingers at the base of her neck for third position (bent at the waist, back flat, hands extended to the ends of the handlebars). 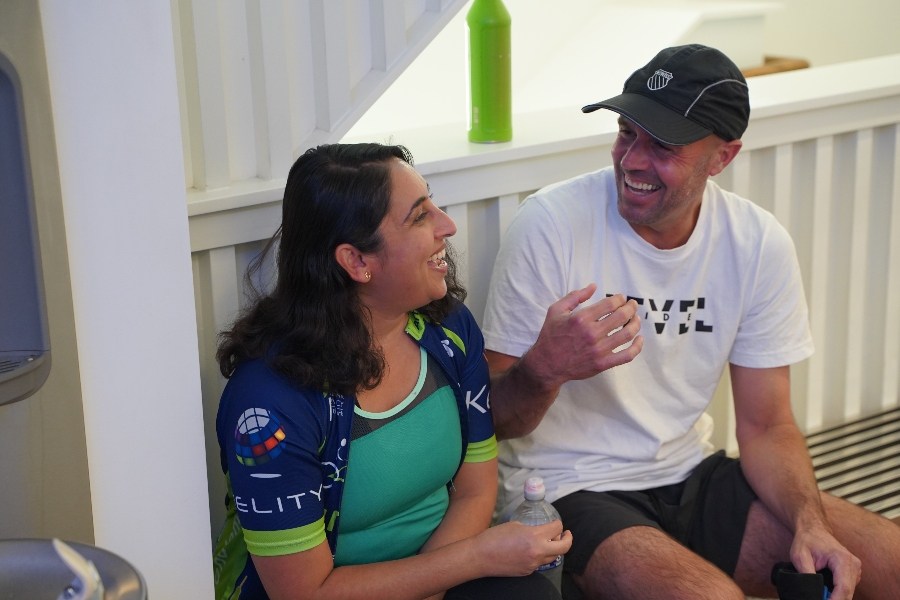 Sethi and Brandon before class at Revel Ride. / Photograph by Christian Betlyon.

How do you feel now as a rider, Jasmin?
Sethi: At this time, I have a much better feel for speeds, but also for how the instructors teach. I recognize it’s hard for instructors to say everything and project over the music. I’ve asked some of them to project a little more or be a little more clear with their cues, and they’ve been very receptive. Small adjustments like that can help allow more people to follow the class.

So is the ultimate goal to remove signaling completely?
Sethi: I think it’s good to build up sustainable routines, especially when it comes to fitness and wellness. Also, I’m the kind of person who wants to be able to do things independently. One of the advantages of spinning — compared to other group workout classes — is that it’s a bit easier [for me] to follow because there’s a limited set of movements. Once you get to know an instructor’s teaching style and your body starts to recognize how certain resistances feel, then you might not need as much feedback. I think it’s great if I get to the point where I can do all this on my own, especially when Richard is on the road [for work] or is teaching a class himself.

Richard, you mentioned that you don’t have formal training in adaptive fitness. How has your experience collaborating with Jasmin influenced your training to become a spin instructor?
Brandon: Riding with her is a true participation in someone else’s class experience. When I train to be an instructor, I train as if I’m riding with her. For instance, when I first started working with Jasmin, I tried doing what she does: getting on the bike and riding — at least to one song — with my eyes closed. All of that really relies on clean, pretty impeccable instruction. I have tried to be mindful that every single instruction I give [during training] is clear, and every move I expect my riders to make is fully described so that every person in class understands and can succeed. 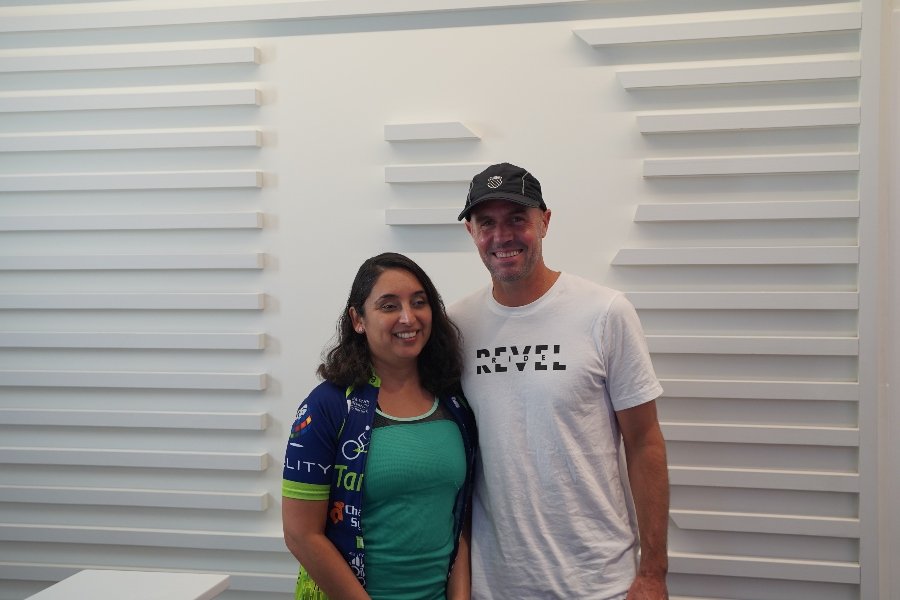 Sethi and Brandon at Revel Ride. / Photograph by Christian Betlyon.

Jasmin, from your background and our conversation, you seem pretty outgoing, curious, and willing to try new things. But going to a new fitness studio or wellness space can be intimidating, and I can imagine that might be even greater for someone living with a disability.
Sethi: I’m definitely someone who takes initiative but recognizes that not everybody else is like that. I also believe people have to take risks, to show up and try something at least once to see what they’re capable of and if support exists for them there. The instructors at Revel have been great, and my personal trainer at Elevate is pretty hands-on and will redirect hand positions or move my body if I’m not doing a movement properly.

But I’ve also experienced unwelcoming situations with people who have not wanted me there — maybe they felt ill-equipped, afraid, or overwhelmed. Once, I went to go for a walk in the city with a meet-up group, but the leader said they didn’t want to have a blind person on their walk. I am capable of going on a leisurely walk, and just might need some assistance every so often. I was disappointed because I really wanted to walk, but I also didn’t want to be around a person who was so rigid and dismissive from the beginning. In the end, though, I’m a fairly pragmatic consumer, and have the freedom to choose someone or somewhere else. I’m not going to win anything by trying to change someone who isn’t going to budge.

What do you think the local fitness community can do better or more of in order to make sure that every person who walks through their doors feels welcome and capable of completing a workout?
Sethi: I can only speak from the perspective of someone who is blind, so I can’t say this is the same for other disabilities, but it would be great if a studio owner or an instructor is open-minded to at least small adjustments. People might often think they have to make major modifications, when in fact, they probably don’t. I’m a big believer in the idea that making a few small adjustments — especially in a community setting — can go a long way, help people be better communicators, and lead to greater inclusivity.