Meet the Man on a Mission to Make Triathlons Cool

Soj Jibowu started Cherry Hill-based Varlo Apparel to bring representation to the triathlon and cycling apparel space and to share his love of the sport with as many people as possible. 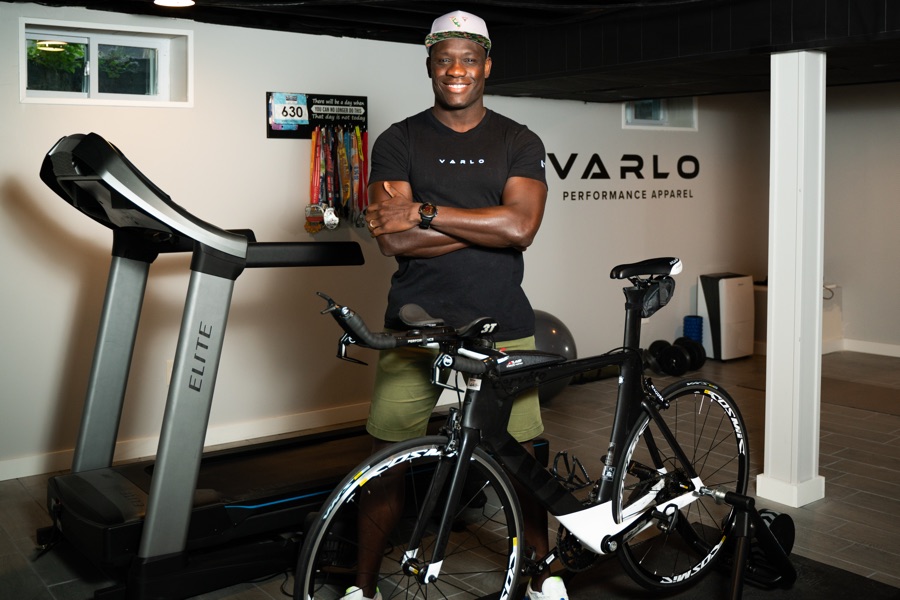 Soj Jibowu started Cherry Hill-based Varlo Apparel to share his love of triathlons with as many people as possible. | Photography by Jonathan Arena

Soj Jibowu, founder of local company Varlo Apparel, had always known about triathlons, in the way that most people are vaguely aware that triathlons exist. But it wasn’t until he saw his first one up close that everything shifted for him.

“I remember randomly being in Chicago during the World Triathlon series,” he says, “and seeing bikes that were like a spaceship, super-slim and aerodynamic. I watched the race on a whim. I went over to the start line; it was super-packed. These athletes came out and just jumped in Lake Michigan. I was amazed — like, ‘That many people know how to swim that fast?’ Then they get out and spring over to the bike, and they are flying. I didn’t even know you could go that fast, that tight with each other on a bike. They bike 20-plus miles and then hang up their bikes and sprint over and slide on these shoes, and then they’re sprinting 6.2 miles. I was like ‘What the heck is this?’ I was floored. Oh my God. It looked fun. It looked cool. It looked sexy. I knew I had to try this.”

Jibowu was fast, agile and athletic. In college at Central Michigan University, he was a 400-meter track-and-field runner who could run his race in a lightning-quick 46 seconds. (The world record, held by Wayde van Niekerk, is 43.3 seconds.) But he had one problem with his newfound dream of completing a triathlon: the swimming. “I didn’t even know how to swim,” he says. Undeterred, he moved to Philly six years ago for a new job and started working on acquiring aquatic skill as soon as he arrived. He moved in on the corner of 3rd and Race in Old City and began swimming daily in the pool at the Philadelphia Sports Club near Washington Square.

“I went every day to learn to swim. I was obsessed with it. When I finally learned to swim and did my first tri, it was a super-sprint; the swim portion was 400 meters, or a quarter mile,” he says.

“My PR running the 400 in college was 46 seconds, and it took me 46 minutes to swim a quarter mile,” Jibowu laughs. “I remember getting out of the water and people were confused, like, ‘You’re just getting done?’” But that didn’t matter: “As a college track-and-field athlete, I loved competition. As I got older, I kept looking for ways to satisfy that urge to compete.”

Jibowu kept up his triathlon training with a Breakaway team in Center City, now Furthur Training & Racing, led by coach Todd Lippin. “We would go train at Temple and do our track workouts, and then we would do group rides,” Jibowu says. “The first triathlon I did in the city was the Philly Tri, which was actually in the Schuylkill — those got canceled. The last local triathlon I did was the New Jersey State Triathlon.” (He’s also raced the Broad Street Run, the Philly 10K, and the Philly Marathon and half-marathon.)

“When I would go to these triathlons, by nature, I started asking questions,” he explains. “My background is in science, and I’m a business and numbers geek. I was curious about the sport: How many participants come? How many people are racing nationwide? How many people are racing it globally? I started looking at other sports like hockey, basketball, football, sports where the big three play — Nike, Adidas, Under Armour — and I started wondering why they’re not doing more in triathlons.”

Over the years, Jibowu only became more passionate about triathlons and began to wonder whether he could turn his passion into a business. He started looking seriously at the marketability of the sport’s apparel, and remembers thinking, “‘Man, I think I’m curious enough to seriously pursue this.'” He dug into apparel and revenue numbers and did projections — and to his surprise, all of the numbers looked good. He decided to commit to starting his own triathlon brand. In 2020, it turned out that it was easier to gain contracts and deals from manufacturers who were looking for new clients amid the pandemic’s business slowdown. “We got access to the manufacturers and fabrics and builds that other top names in the sport use — like Castelli, Raffa, Louis Garneau, you name it,” Jibowu says.

In September of 2020, Jibowu officially launched his new venture: Varlo, an international cycling and triathlon brand offering technical multi-sport performance apparel. Jibowu is the founder, with former NFL player and digital marketing creative Jacob Brown as his business partner. Brown handles user engagement, the website, platform digital marketing and the like. The newly launched performance brand includes men’s and women’s cycling and triathlon garments ranging in price from $90 to $280. 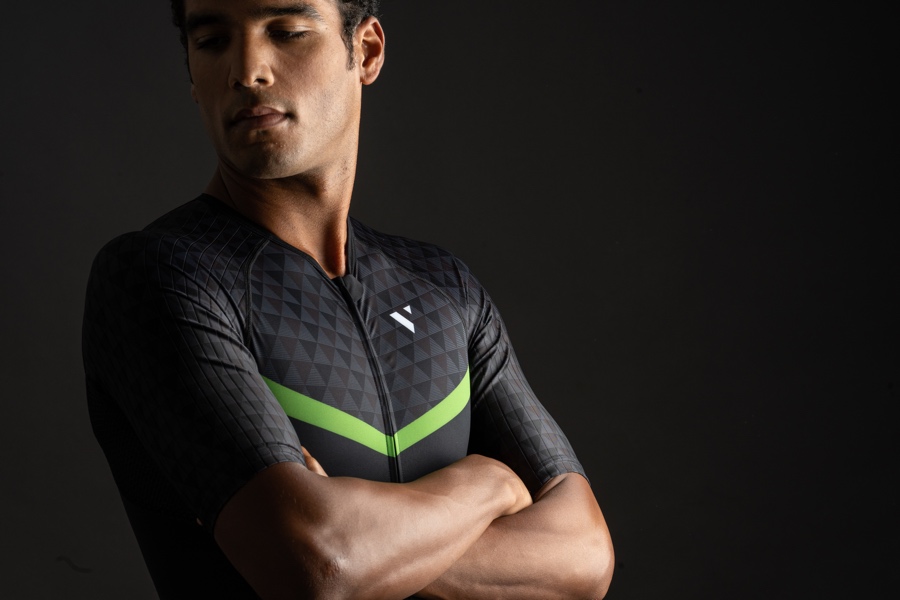 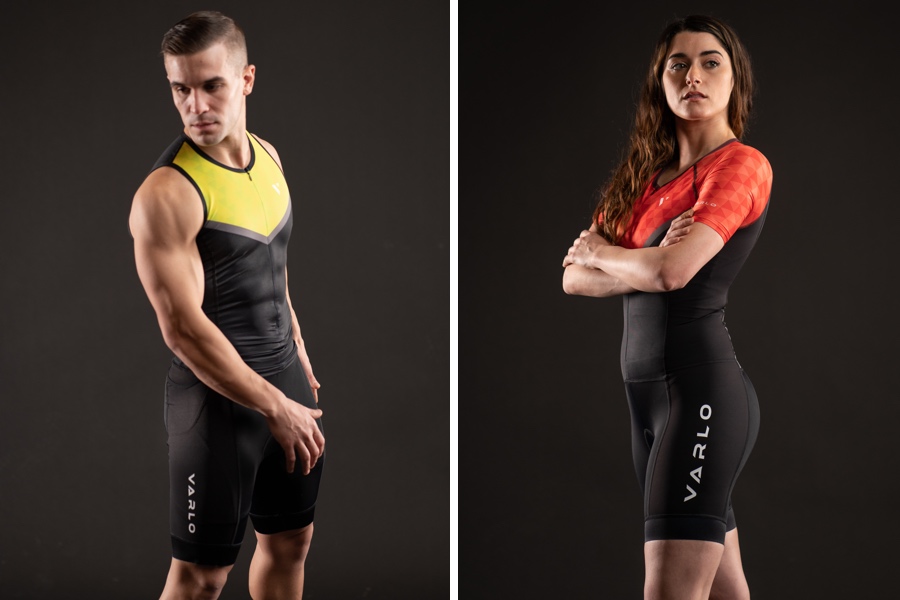 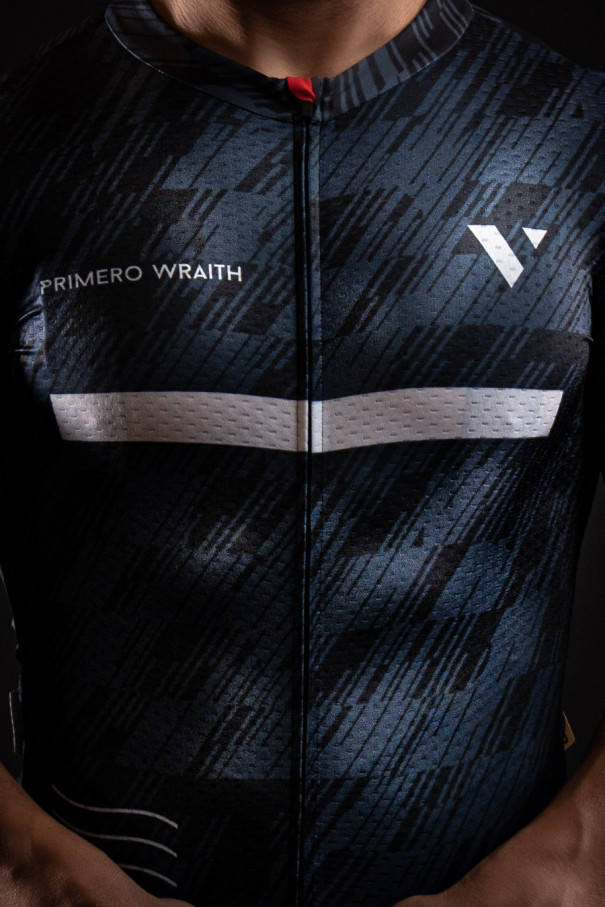 This spring, Varlo will be launching a new multi-sport collection with 15 items in the style of this garment. | Photography by Jonathan Arena

In a challenging year, Jibowu is optimistic about the future. “There’s reason to believe that cycling apparel sales are going to be extremely high in 2021 due to the boom of 2020,” he says. “There was an 87 percent increase year-over-year for performance bikes alone.” And he’s right — amid the pandemic, there was a notable bicycling sales and equipment boom as people looked for new ways to move freely, get exercise, and be outside. The trend looks to be continuing in 2021.

Jibowu wants to capitalize on this cycling fervor and leverage that energy to continue to change the world’s perceptions of the triathlon as an out-of-reach sport. “One of the things the sport’s marketing still doesn’t do well is sell how cool the sport is,” he explains. “They sell it like it’s almost a bucket-list thing — like you have to do an Iron Man and you’re going to train a million hours a week. There’s this lack of understanding that you can do a sprint triathlon and you’re still a triathlete. There are different levels, like sprint, super-sprint, half, full. … If you’re a triathlete, it doesn’t have to mean you’re somewhere in Kona with helicopters and lava. The perception isn’t that anyone can do this at some level — it’s that you have to be some ultra-athlete. I want to change that and make it more accessible.”

Jibowu also emphasized the significance of Varlo being a Black-owned multi-sport brand. “If you look at the culture of cycling, it’s always been a certain way. One of the unique things about our brand is that it’s a Black-owned triathlon and cycling brand. That’s unheard-of,” he says, “So there’s a responsibility I feel to do it right and be methodical about it. It’s important that we have diversity represented in the brand. Our job is to make sure athletes feel secure and empowered, and we want to make sure we’re bringing new people into the sport.”

Overall, he hopes for Varlo to stay rooted locally but to expand internationally. Reggie Waller, a board member of the Bicycle Coalition of Philadelphia and a member of the Philly Tri Club, runs Varlo’s domestic and international ambassador program, which includes 60 ambassadors from Switzerland, Portugal, the U.K., South America, and here in the States. “We also use a lot of Philadelphians in our ads and campaign pieces and have more local collaborations in the works,” Jibowu adds, nodding to an existing local partnership with the Bicycle Coalition’s youth programs.

“What we’ve been able to achieve already is huge,” says Jibowu. “Because all of a sudden in the space of triathlon or cycling, Philly is on the map for a new reason. And if we do it right, it’s only going to keep growing.”