When it opens on November 15th, the store will come complete with 41 taps, six arcade games, three video game consoles, and more. 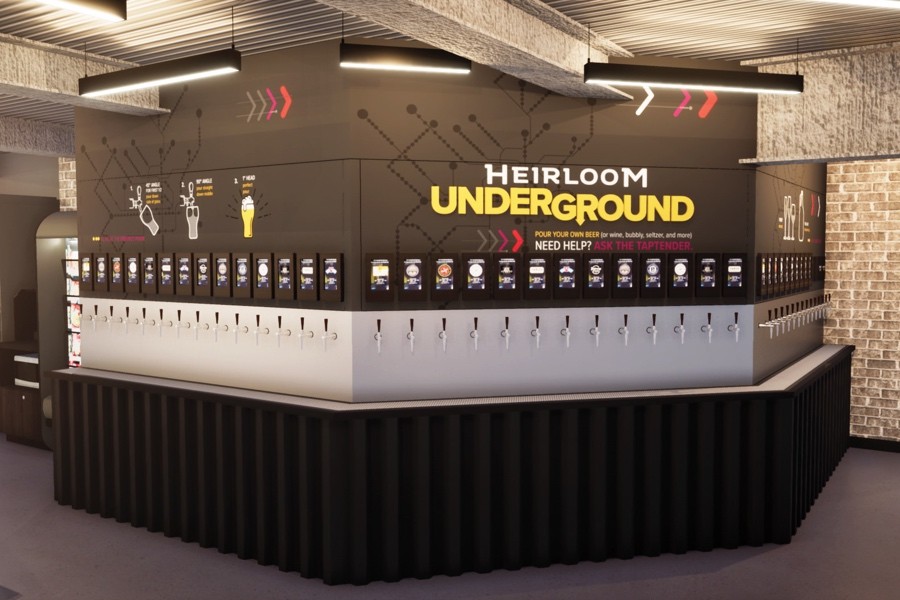 Giant Heirloom’s next location in Northern Liberties will feature a a ton of self-pour taps with beer, wine, hard seltzer, and more. / Rendering courtesy of Giant Heirloom Market

This article has been updated.

We didn’t give out a Best of Philly award for best grocer this year, but if we had, Giant Heirloom Market would have been in the running. The small, curated stores have made life easier (and grocery shopping cheaper) for area residents since Giant began gradually opening them at the beginning of 2019 — Graduate Hospital in January, University City in August.

What we especially love is that each store has catered to the neighborhood it’s located in. Some offerings are always the same — the sampling stations; the on-tap kombucha; the blending station for olive oil and vinegar; the products from local partners like High Street on Market, Isgro Pastries, and Claudio Specialty Foods. But there’s always been something a bit different about each location. Compared to the Grad Hospital location, for instance, the Giant Heirloom in University City has more grab-and-go items and a large beer selection to cater to the college population in the area.

With its next location, Giant Heirloom is ratcheting up that hyperlocal focus. When Giant Heirloom Northern Liberties opens on November 15th at 1002 North Second Street, the 13,000-square-foot store will come complete with a basement taproom and gaming area known as “the Underground.” “We went to Barcade and Frankford Hall and saw what was going on in Fishtown and the vibe that was creating,” says Paul Madarieta, the director of growth initiatives for Giant. “Based on the people we talked to in the community, they were excited about that type of space where they could go hang out and get their groceries at the same time.”

The Underground will feature 41 taps of craft beer, wine, hard seltzer, hard kombucha, and Prosecco. It’s a self-pour setup using IPourIt technology, so you can easily snag a small sample or a full pour yourself. There will be even cranberry juice and orange juice for free, so you can make yourself a mimosa or other fun drinks. It’s all priced by the ounce and varies depending on the type of alcohol, but IPourIt says the prices are on par with what you’d find in a standard taproom.

It helps that there are a bunch of other amenities in the Underground space. High Street on Market is bringing in a cart with warm pretzels, and other small appetizers will be available as well. Six full-console arcade games, including NBA Jam, a golf-themed game, and a Simpsons-themed game, will populate the gaming area; many of them are designed for two players so you can face off against your friend. Plus, there will be three gaming consoles: Nintendo, Nintendo 64, and Sega Genesis, each pre-loaded with at least 50 games.

That’s before you get to the board games, large Jenga, custom-made chess tables, shuffleboard deck, and giant magnetized Scrabble wall — the classic word game but with way bigger tiles. All the games, video or otherwise, will be free, enticing folks to, as Madarieta says, “stay and play.”

Given Giant Heirloom’s prime location across from the Piazza, we don’t think they’ll have much trouble attracting folks to drink and hang out (although the nearby Acme on Girard Avenue also has a bar). The real challenge might be getting the tipsy gamers to remember they still have to make a grocery run afterward.