Inside the Philly Journaling Workshop That Brings Up All the Feels

I was convinced expressive writing couldn't work for me, but Hava Rose's Creative Collective proved me wrong. 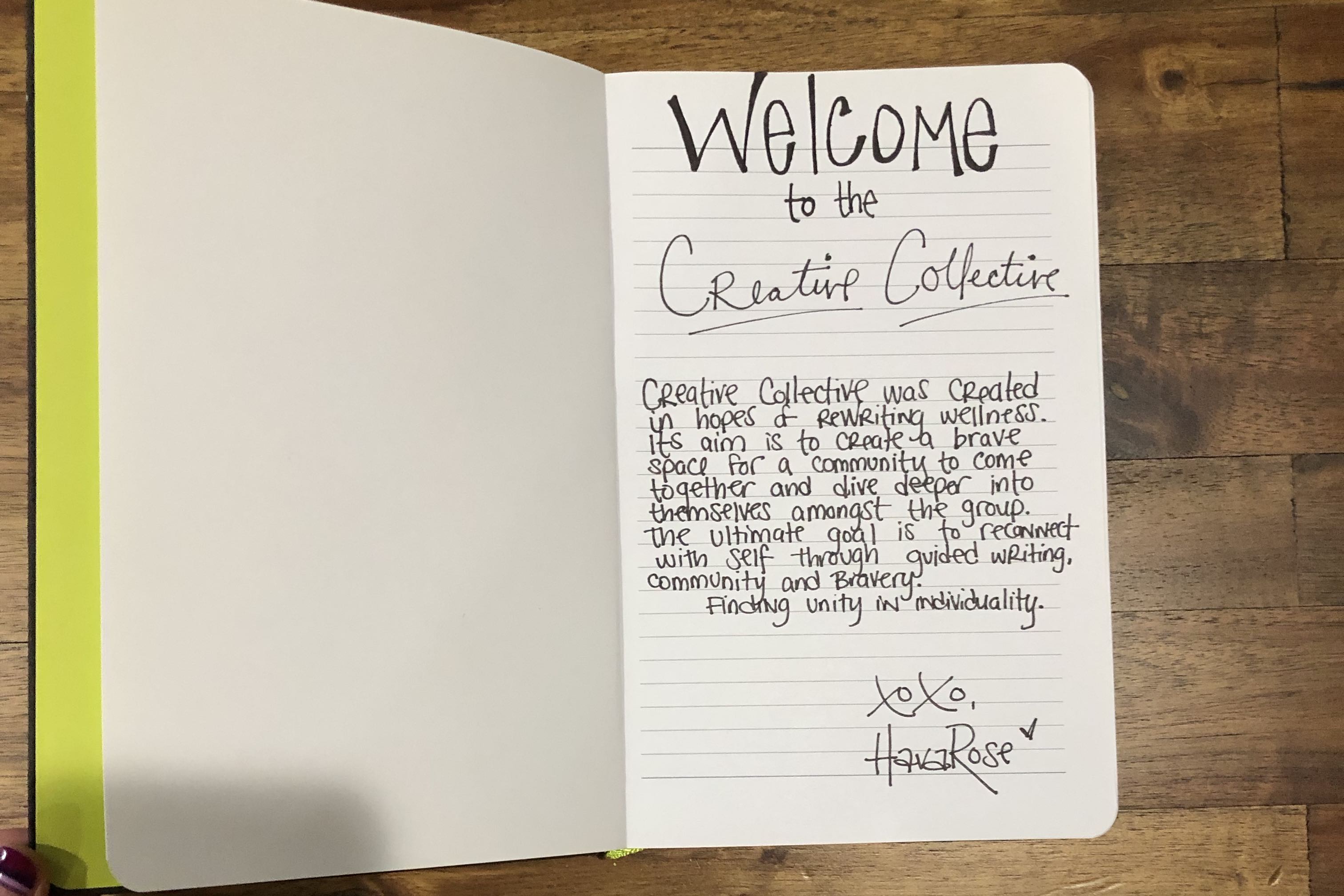 Three Christmases ago, there came for me the landmark moment that occurs in nearly every young adult’s life: My mother forced me to clean out my childhood room.

The space had sat untouched for nearly a decade — my dual alarm clock/radio/CD player with the Taylor Swift Fearless CD inside sitting next to my bed, wallet sizes of my high school friends’ graduation photos tacked to my bulletin board, the award I got from yearbook camp (yes, really, I was that girl) resting on the thrift store desk my mom had slip covered to make less pink and flower-y. The whole thing was a time capsule waiting to be opened, especially when I discovered the large drawer full of journals that dated back to elementary school.

There was the lilac one that looked more like a Sarah Dessen novel, with an illustrated flower on the front and a built-in bookmark. The small black one that you had to use a gel pen to write in, creating what my American Girl Quiz Book would have called a “bold” aesthetic. The large, gorgeous one with a velvet cover dappled in stripes of gold, black, garnet, and emerald. The latter in particular felt like a symbol of my adolescence, like I was trusted enough to own something beautiful and not ruin it.

If this were a startup founder story or a Netflix movie à la To All the Boys I’ve Loved Before and Someone Great, these journals would have been filled with angsty yet wise-for-my-years insights that foreshadowed my future career as a writer and perfectly aligned with my nerdy girl brand.

Except they weren’t. Or rather, there weren’t very many of these aha moments. I simply didn’t write that much. Virtually all of the journals had only one or two entries. Most of them dated to January, right after I’d received this latest notebook in my Christmas stocking and I had the zeal and ambition to try to maintain a regular journaling practice and document my trials and dreams — and, of course, unrequited crushes. (Thank you, Rob Selesky, for being so kind despite my cringe-worthy attempts at flirting in freshman bio.)

Like so many New Year’s resolutions, I always abandoned this one quickly, less out of a busy schedule than that journaling didn’t seem to pay dividends for me. Looking over my thoughts later, both months and years after I’d written these entries, I didn’t feel like I’d come to any epiphanies through the process. If anything, I felt embarrassed, like they should have been more witty and polished. (On second thought, perhaps, this habit of incredible self-loathing did predict I’d become a writer.)

All of this is to say that when writing about your problems in a journal became a verb unto itself, gracing the captions of Instagrammers touting self-care and the Mindbody schedules of fitness studios looking to add an extra boost of wellness, I stayed away. By then, I’d begun to develop other rituals to help process trauma and create more boundaries for myself, albeit slowly. Journaling simply wasn’t for me, and that was OK.

But, as I spent more time covering health and wellness and studies started supporting the “emotional and physical health benefits of expressive writing,” I felt an increasing sense of FOMO. What if I’ve changed? My over-anxious brain kept asking. What if now, as a slightly more mature human with a further developed prefrontal cortex, my neurons could make more effective mental leaps by writing down my thoughts, especially in a structured setting with prompts? After all, trying out a journaling workshop likely wouldn’t hurt me.

So, with trepidation, I signed up for the Creative Collective, run by Hava Rose. A Renaissance woman when it comes to wellness, the chiropractor and co-founder of the plant-based brunch series Namaste Nourish had been hosting group journaling events about once a month since March, typically alongside a healthy meal. Rose had been journaling since she was a teenager and had found it beneficial in recognizing harmful patterns in her life. Yet she wanted to recreate that atmosphere in a safe group setting.

“When people journal, they’re usually alone, and I think there’s a blockage in really being vulnerable to themselves,” Rose said on the phone. “In this community, when everyone around them is also doing the same act, it creates this almost forcefield that enables them to break down and open up to themselves even more.” 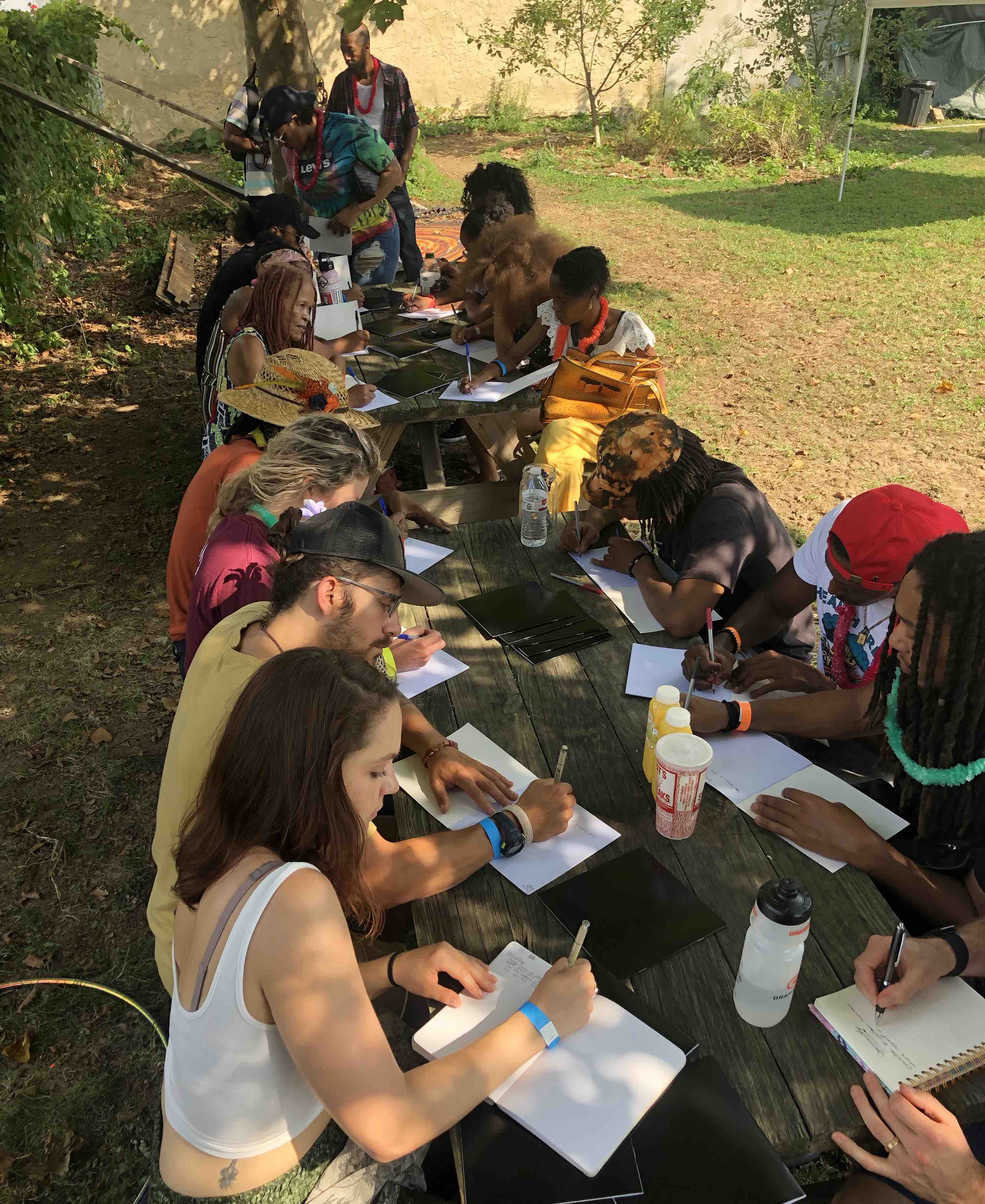 On a rainy Thursday night, I settled myself in Rose’s Fishtown living room, ready to see if that was indeed the case. About 10 of us sat on pillows and couches with our notebooks — and coconut water and granola bars — at the ready. Rose asked us to introduce ourselves, say where we lived in the city or suburbs, briefly talk about a transition we were going through, and give a word to describe how we felt about the flux. It seemed as if everyone was experiencing some sort of shift. A few had just graduated from college and were exploring their adult identities. One had gotten a divorce. Another had recently moved from Europe back to the United States. And then, there was me, the one in recovery from surgery. In my head, my word was uncertainty, but instead, I shared that I was trying to do what a new friend had suggested and embrace the “I don’t know.”

Then we moved on to prompts. Rose told us to think about the word “trust” and write until the rhythmic music, playing softly from her stereo, paused. Immediately my father, who I’ve had a strained relationship with over the years, popped into my head. Although this connection wasn’t unexpected, I hadn’t navigated any strife with him recently. As I wrote, I realized that the way I think about and categorize the world is very much related to my struggles with my dad. I’d spent years convinced I couldn’t glean any insights from stream-of-consciousness writing and, within 30 seconds, I’d proven myself wrong.

Some of us then shared general themes, and I wrote down words that other people mentioned that resonated with me, like “compass” and “vulnerability.” The latter was actually our next word prompt. Writing about this didn’t do as much for me, likely because there’s so much twisted up in that word that I probably need several therapy sessions in order to unpack everything instead of three minutes of thinking.

The pattern continued, with “surrender” and then “transition” (for the latter, we had to work all the previous words into our response), various folks sharing tidbits along the way. One woman in particular seemed to gain a lot of clarity from the process, and seeing the cogs turn in her head as she talked was like watching the sun rise after a long night. Rose says that happens with at least one person in almost every session.

For me, it felt more like I’d lit a match, a flickering light that signaled an abrupt change in matter before it vanished and left me to do the hard work again. But it felt good to sit there in a safe group of people and do nothing but write, without worrying about grammar or syntax. These were just thoughts. There was no expectation of them.

At the very end, we wrote words and phrases we wanted to let go of on pieces of tissue paper, rolled them up, and lit them on fire. My first attempt smoldered but drooped lifelessly onto the floor. I tried again. This time the flimsy paper curled into itself as it flew into the air. It disintegrated into bits of harmless ash, taking my youthful doubts with it.

Sign up for the next Creative Collective journaling workshop here (for a meal included) and here (only snacks).