Sometimes the right training partners have four legs, not two. 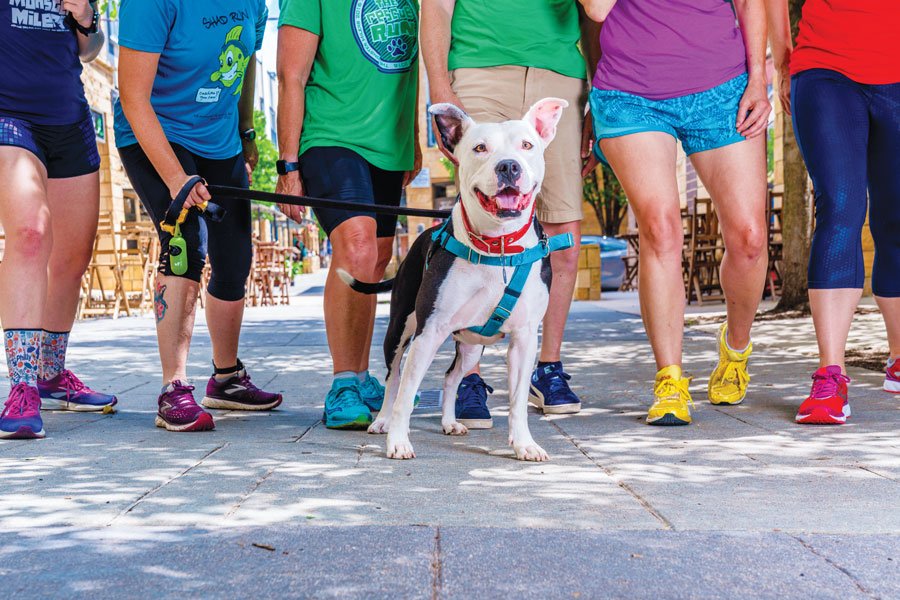 I’ll be the first to admit that I take a pretty selfish approach to running. I want to set my own pace. I have a weird habit of always needing to be two steps in front of whoever’s beside me. I want to run when I want to run — first thing in the morning, before I’ve eaten anything.

So, yeah, I’m not exactly running-group material. But that didn’t stop me from joining a free Sunday fun run with the Monster Milers midway through my training for this year’s Broad Street Run. After all, this running group involves dogs — adoptable ones, taken out of shelters for jogs by good-hearted volunteers who want to make sure the pups get exercise and exposure to the community while they wait to get adopted. (The Milers also provide foster homes for dogs.)

On this particular Sunday, the Monster Milers were headed out for a four-ish-mile jaunt along the Schuylkill River Trail with Babe, a brown-eyed black-and-white pit bull mix. She’s been a resident at Street Tails Animal Rescue in Northern Liberties since November.

Babe isn’t my typical running buddy. She’s slow. She’s carrying gear — a GoPro strapped to her back that dips back and forth with every step. She’s not overly athletic in general. And yet I quickly learn that it’s Babe who sets the pace. Babe who has all eyes on her. Babe who strides smack in the center of the handful of seasoned runners who’ve turned out on this sunny mid-April morning.

We leave from the Center City Philadelphia Runner, cutting down Rittenhouse sidewalks. We don’t follow my usual “If there are no cars, then go” rule. Babe stops and waits for every light, so we stop and wait for every light. When we finally arrive on Locust Street, we cross the train tracks and hop onto the Schuylkill River Trail. When Babe stops at the water fountain for a quick drink, the rest of us pause, making sure she gets her fill.

From there, we’re headed north to the Art Museum. The running crew surrounds Babe like a slow-motion Secret Service team: A couple runners stay a pace ahead of her, one runs right next to her, and a couple more take up the rear.

“Dog!” shouts one of the front runners, and the group immediately slows, shuttling Babe to one side as additional runners fill in beside her, a human shield between her and the potential threat. This, I learn, is to ensure that no shelter dogs engage with passing animals — because if a fight ensues and someone gets hurt, we all know which dog will take the fall.

By the end of the run, I haven’t broken a sweat. I didn’t go as far as my training plan said I was supposed to. And yet, as I watch Babe sprawl on the cool floor of Philadelphia Runner, tongue lolling and a goofy grin on her face, I can’t help but feel satisfied. And then I think about my own dog, and how annoyed I get when he wakes me up in the morning or pauses to sniff something on a walk. About how easy it is to forget that just like Babe, he’s a dog, and strict human schedules don’t apply. And I start to realize that if I ran with the Monster Milers a little more often, maybe I could learn to be a less selfish runner — and a more generous dog owner. I just need a little training.

Published as “A Runner’s Best Friend” in the August 2019 issue of Philadelphia magazine.