We're over the tried-and-true street, so we turned to various local running groups to help us freshen up our mileage. 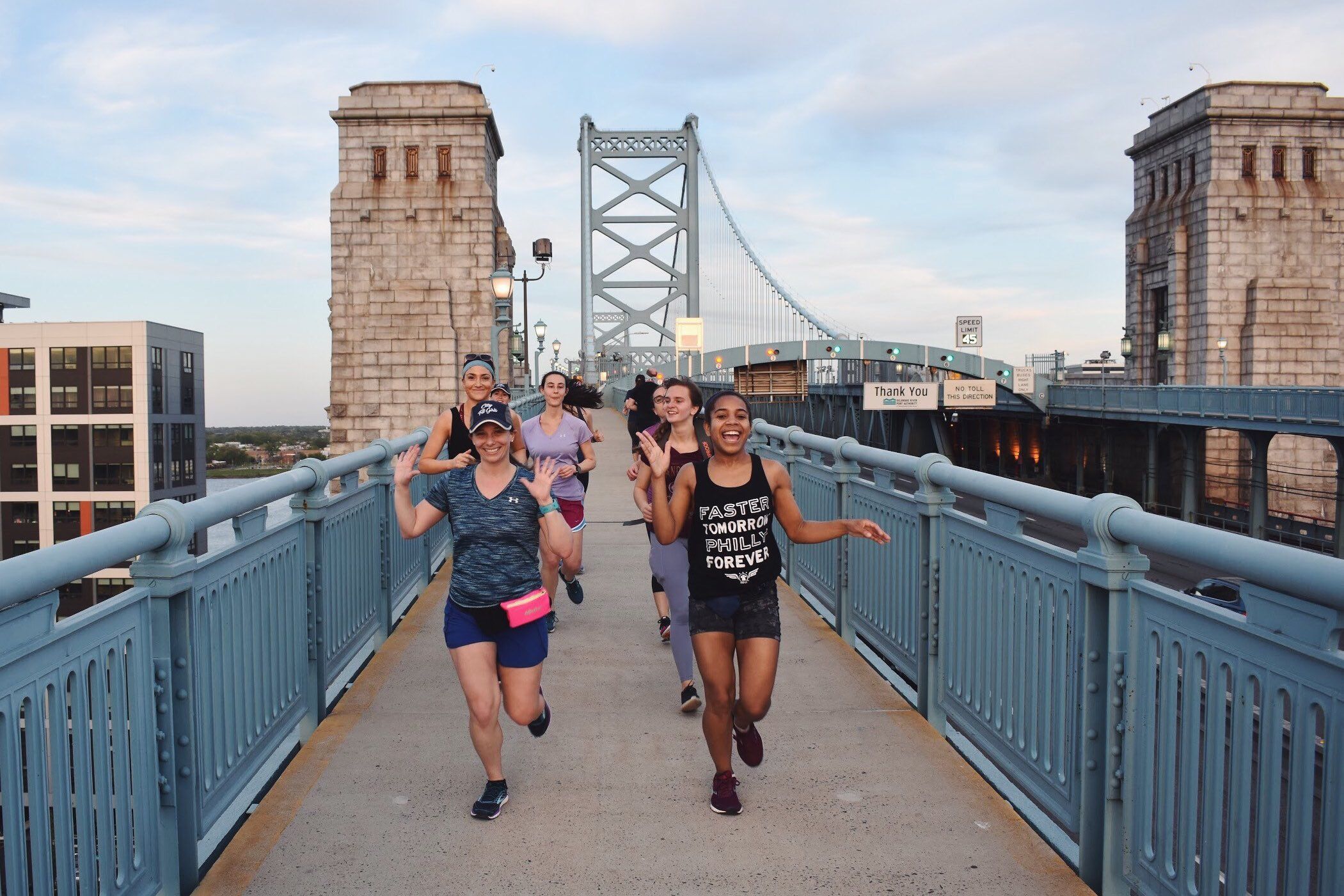 One of our experts’ favorite alternate running routes to Kelly Drive is the Ben Franklin Bridge. / Photograph courtesy of City Fit Girls

This post is part of our Running Week content. Stay tuned for more stories related to pounding the pavement.

You’ve gotta love the Kelly Drive Loop: It’s accessible, it’s got great views, and it wraps up in front of the god of resilience (aka the Rocky statue). But we’re feeling like we’re giving it a little too much love lately, especially because it was a good training route for the Broad Street Run. Now that this year’s 10-miler is over, we’re looking for ways to freshen up our mileage. So we turned to several local running groups and experts to get a lowdown on where we should be jogging next.

“We love running the Ben Franklin Bridge to switch up the pace, get a great view of the city, and to really work on conquering hills. We run it as a group on the last Wednesday of every month. If you run the entire bridge and back (end to end), it’s about three total miles. Since the bridge is one giant incline, it may not be best for beginner runners but can be great for runners who want to do hill repeats and tougher workouts. The difficulty can be modified by including less of the bridge on your run. Notable landmarks include Penn’s Landing, the Camden Waterfront, and a great view of the Philadelphia skyline.” — City Fit Girls 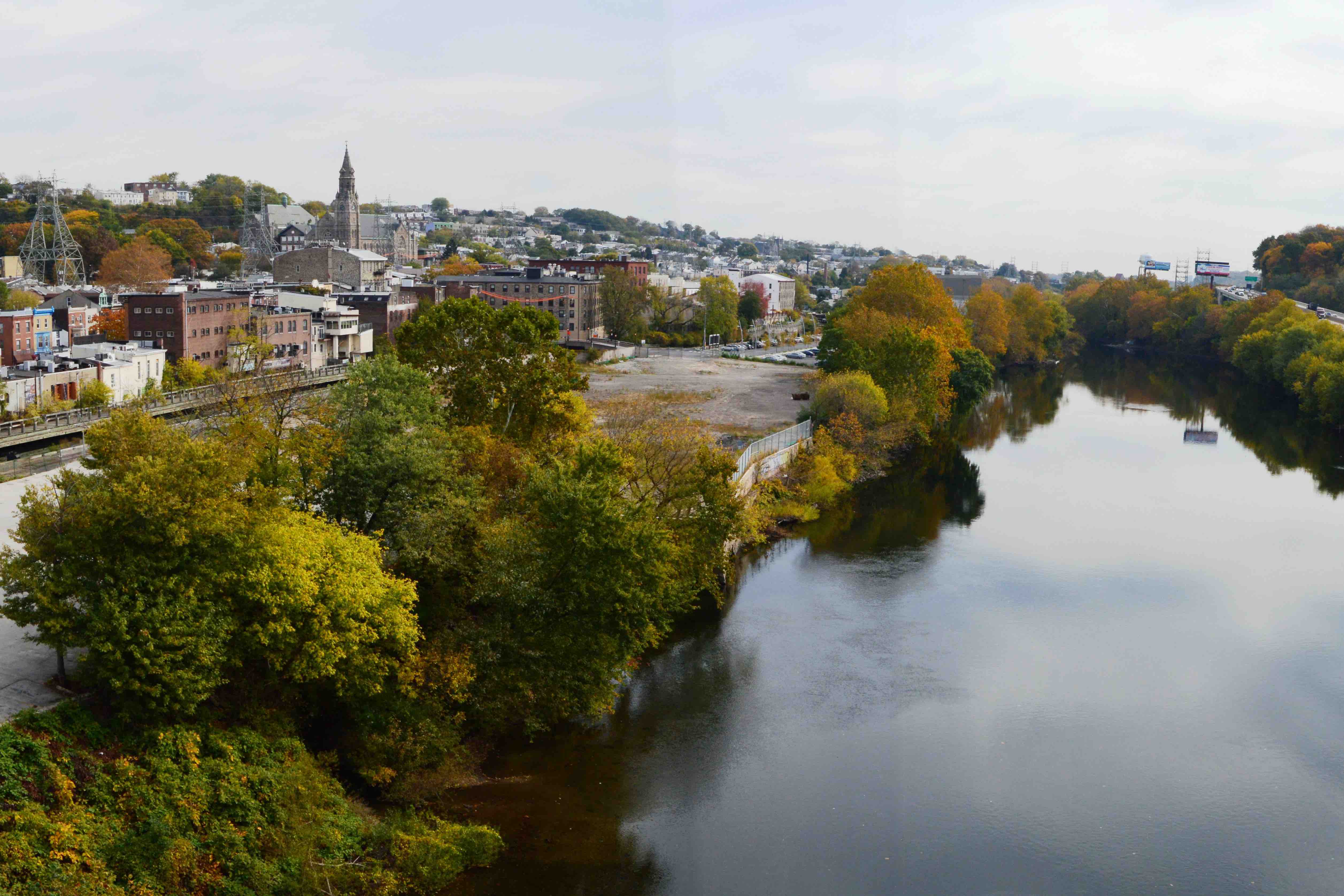 The view from Manayunk Bridge. / Photograph by Montgomery County Planning Commission/courtesy of Flickr

“While the KD is surely a favorite route to hit the city from East Falls (where I live), I’ve more recently fallen in love with running the opposite  direction and heading out to Main Street and up over the Manayunk Bridge. The  views and the incline are only part of what makes the bridge a solid run route. For me, it’s a great spot for mile repeats, as they are easily marked on the trail and, according to my Garmin, it’s where I’ve clocked my fastest mile!” — Suzanne Allaire, co-founder of November Project Philadelphia and guide for Highline retreats

“Running on Ridge and Shawmont avenues into the Manayunk Canal Towpath is a secret gem. From rolling hills to steep climbs to flat long stretches, it’s a great mix to prep for any race.” — Lez Run Running Club 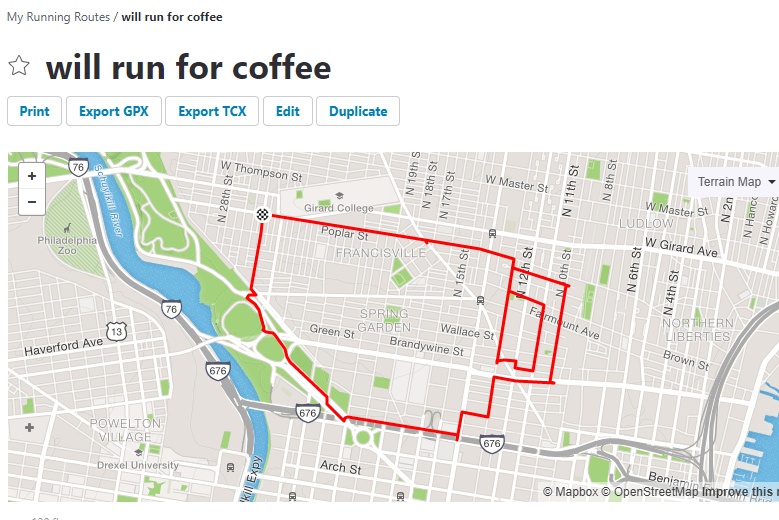 “The Coffee Cup Run in Fairmount/Francisville is a quick, approximately 5.5-mile run around the Spring Garden area with a pass-by of the Art Museum after jogging up Ben Franklin Parkway. It starts and ends at Lucky Goat Coffee House. Or the Wiener Dog Run is a bit of a longer run at almost nine miles, but you get to run along both rivers and get a nice tour of Spruce Street. Recommend doing this in the earlier morning to avoid dodging pedestrians.” — Philly Surge Running

“For an estimated 10-mile loop, starting from the South Street Bridge, head east to 34th and Spruce. Take 34th Street all the way past the zoo and Girard Street, which will put you on Lansdowne Avenue. Stay on Lansdowne until it becomes South Concourse Drive/Avenue of the Republic. From there, you will cross 52nd Street, and it becomes George Hill Drive. (This is a hilly road that puts you behind the Mann Center.) As you stay on it, you continue until it becomes Belmont Mansion Drive. This is great as you will see the skyline from the top of Belmont Plateau. Stay on this until you hit Montgomery Drive and take that down until Martin Luther King Jr. Drive. Taking MLK Drive back to the Schuylkill River Trail and up the South Street Bridge gives you 10 miles! Scenes along the way: Franklin Field, Penn, Drexel, Please Touch Museum, Philadelphia Zoo, Mann Center, Belmont Plateau.

I like this route because it’s full of hills that aren’t too overwhelming (makes for a great bike ride, too!). Anyone training for the Philadelphia Marathon can also get a preview of different segments of the course.” — Philadelphia Runner coach Breandan Lyman