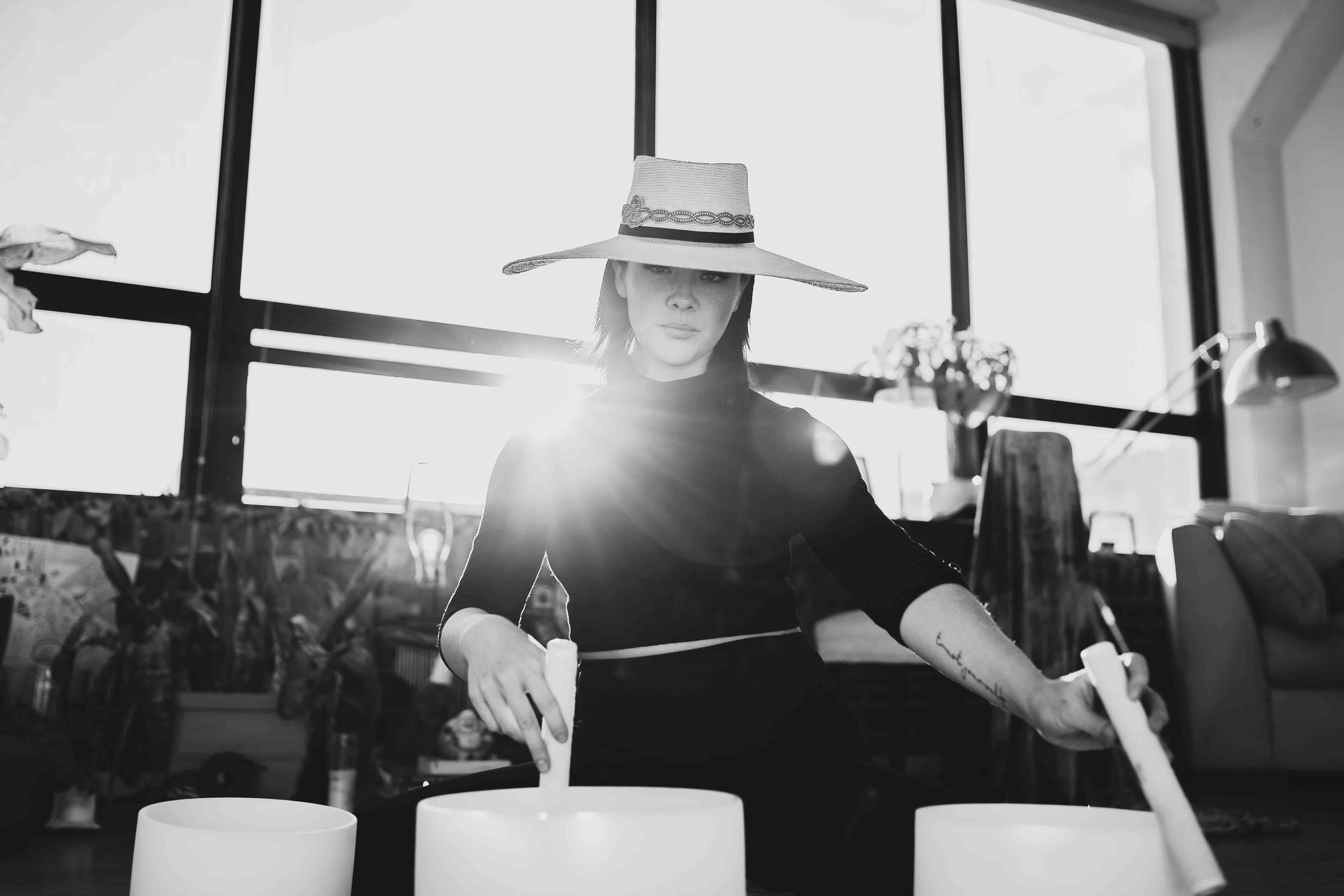 Luna Maye has become one of the go-to artists for sound baths in Philly. / Photograph by Max Grudzinski/courtesy Luna Maye

Have you ever stumbled across a place with pulsing energy? It could have been a nightclub, where the heat of moving bodies is palpable, or one of those yoga studios with such a peaceful presence that you can’t help but give in to the vibrating stillness.

For me, that spot was Kensington’s Haven Wellness Center on Thursday night. The back wall of the back room was white brick, the kind you see in Real Simple Instagram posts, and it was covered in white candles and their flickering flames. They must have been sitting on shelves because they went all the way up the wall in a little vertical panel, but it seemed to me as if they were floating, beckoning us to sit next to them, close our eyes, and breathe.

In front of this wall of light was a half-circle of crystal singing bowls. Most were white, but one had a blue tint and another was the color of rose quartz. Behind them sat Luna Maye, the resident sound goddess of Philly. (She refers to herself as a sound artist and meditation guide.) She wore a crop top, black leggings, a long black sheath-y vest, and a straw boater-esque hat with a black ribbon and a diamond band. She looked like she’d fit in both at Burning Man — which she has attended, playing her bowls while drones flew through the air, synced to the music — and a spoken word night with smooth talkers and jazz vibes. Once she started to speak, her sultry voice lent to the latter image. It was low and slow but, like her backdrop, conveyed enormous, concentrated energy.

I know she welcomed all of us mostly novice sound meditators into the space, pointing out the pillows and blankets we could grab if we wanted to be more comfortable on our yoga mats. But the first phrase of hers that stuck in my mind didn’t come until she knocked over one of the bowls. Altogether, the instruments cost close to $4,000, and she’d already broken one earlier this week, on the day of the full moon. Even though she was frazzled, her voice was glossy. “You can’t rush the bowls,” she said. “You’ve got to be intentional about it.”

Now, I know this sounds New Age-y. Regarding the “new” part of that term, singing bowls are actually very old; although there’s some debate about their origin, they or objects similar to them have been used in Eastern cultures for centuries. That whole woo-woo healing part? There can be some pseudoscience tones, depending on the reasons your practitioner gives for why sound baths are effective. But music in general is known to help people feel calmer, less stressed, and less depressed, so it’s not surprising that singing bowls tend to make listeners feel more relaxed.

In general, Maye thinks sound baths can be an accessible vehicle for meditation, especially for those who struggle with mental health issues. “For anyone who navigates anxiety or depression,” she says, “meditation is a luxury we never know if we’ll have.” If listening to primal sounds and Maye’s luxurious voice is less intimidating than trying to focus on nothing, and it allows some folks to meditate more easily, that’s a win.

At Haven, Maye started with the self-care early by asking us to write a love letter to ourselves on an index card. We’d then put the cards in envelopes with our addresses on them, and she’d mail them to us sometime in the future. This is the kind of exercise I’d typically roll my eyes at, but it was actually refreshing to feel like I was getting my love from, well, me. I tried not to tear up as my pen scratched against the paper, loud in this quiet space, and I reminded myself that I deserved to be here. I then put my envelope under my mat, as directed, so I could absorb the words while meditating. That seemed a bit overblown, but hey, it also wasn’t hurting me.

Then came time for the actual meditation. I lay there with my head on a squishy pillow, eyes closed, as Maye stroked the tops of the bowls with her mallets (think: when people rub their fingers around the tops of water glasses to make music). The tones that emanated felt more like vibrations than any other music I’d heard before, and the image of a massive, rainbow-colored wavelength — sort of like a prism — popped into my head. It crested and jiggled, moving along as a mental manifestation of the pure sounds that echoed around the small, dark room. My limbs began to heat up, with the warmth concentrated in my chest and abdomen to the point that the soles of my feet became cold. I felt, like Maye had mentioned earlier, as if I’d tapped into a different frequency.

And then the noise started. I don’t know if it was a heating vent, a vacuum, a dishwasher, but it sounded in the background as Maye began to sing. Trained in jazz and neo soul, she almost studied music in school but put it on the back burner to pursue event planning. She started singing again once she got out of an awful long-term relationship and began studying sound baths as a coping method. Her singing voice was both clear and kind of musky, as good vocals often are, and it meandered through identifiable songs, such as “Where is the Love?” by the Black Eyed Peas, melding with the vibrational tones of the singing bowls in a resonant wave. It was unusual and beautiful — but I couldn’t concentrate on it with the immense noise in the background, which at times was joined by what sounded like someone pushing heavy boxes across the floor. If I were a better meditator, I probably could have just tuned this out, but it was so distracting that my brain began to wander. I ended up analyzing my day as if I were watching it unfold from a distance, movie-like (a certain type of meditation in itself, to be sure). But my rainbow had disappeared.

When the 40 minutes were done, Maye invited us to check out the space, grab some cheese and kombucha, and introduce ourselves to other folks in the group. Most of us were first-time sound meditators, and it seemed like the sounds really worked for some, giving them something to focus on that grounded them in meditation. I felt a bit sheepish that I hadn’t been able to zone in for the whole length of time.

Later, though, as I was doing more research, I came across a Quartz story on sound healing for which the journalist, Corinne Purtill, had a similar experience, her thoughts bouncing around to different topics with a random childhood memory resurfacing in the middle. “I don’t feel as if I’ve traveled to a different astral plain,” she writes, “but I feel calm, a feeling that lasts…” Perhaps that’s how it’s supposed to be for some people. Perhaps I could have traveled to a different astral plain or did for a short period, but my limitations got in the way. It feels like the kind of thing I’d need to try again — and maybe several times — to know for sure. (Maye holds monthly sound meditation sessions at Haven as well as rotating ones at other venues, including Amrita Yoga & Wellness’ two locations and Vitality Meditation, so that’s definitely possible.) Looks like I’ll have to go back to that blissful room and let those primal sounds work their way into my brainwaves again. Shucks.