12 Great Spraygrounds to Cool Off Your Philly Kids

Beat the heat at our favorite splash pads around the city.

By Laura Swartz and Ashley Primis· 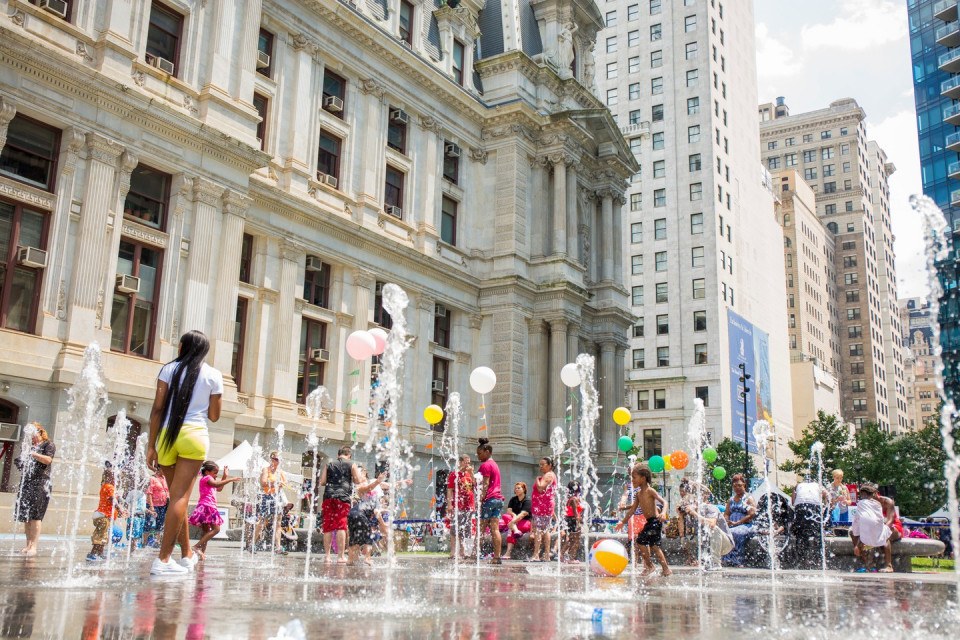 “The temperature’s about 88,
Hop in the water plug just for old time’s sake.”
-“Summertime,” DJ Jazzy Jeff & the Fresh Prince

As Jazz and Fresh told us all those years ago, you don’t need to leave the city (or even the pavement) to beat the Philly heat. We have so many places to splash around when the temperature is climbing and the kids are getting sweaty and restless — some feature elaborate setups while others are little more than a big sprinkler, but when you’re hot, water is water. So pack some sunscreen, a towel, and water diapers if you need them, and hit the streets.

But first: The official, city-listed hours for most city-run spraygrounds are generally 11 a.m. to 7 p.m. on weekdays and noon to 5 p.m. on weekends, but hours of operation have been known to be sporadic and do vary. So here, where we could, we’ve provided the latest known hours, though some sprinklers are run simply by community volunteers and don’t necessarily have set schedules. (In short? A quick call to the park or park rec center before you go might keep things from getting tantrum-y.) Also, it’s very helpful to follow your local park or parks on social media: Information tends to be updated more regularly there.

A big chunk of the plaza space right in front of City Hall is covered in jets that spring up from the ground. Inside, court is in session and the mayor is in, but the party is here on the west side! Its central location means there’s the on-site Dilworth Park Cafe, Air Grille and a Starbucks for a much-needed caffeine fix while you watch your kids splash around. Until mid-July, much of the sprayground’s real estate is covered by the Rothman roller rink, but there’s still plenty of room to cool off. Plus, you can cross over to LOVE Park, whose recent update included dismantling the concrete-circle fountain in favor of ground-level jets: instant second sprayground!
1 South 15th Street; 7:45 a.m.-10 p.m. 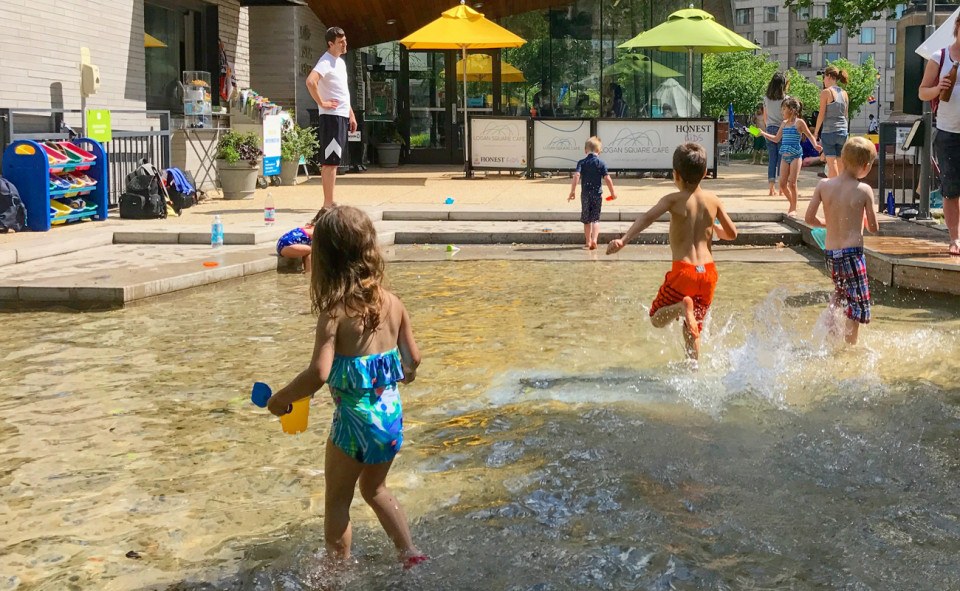 In addition to the active, cooling water jets embedded in the bluestone plaza, there’s also the recently updated Children’s Discovery Garden which includes a wading pond, rocks to scale, and an upper-level wonderland containing a net hammock and a little hut to hide in. There’s also an on-site cafe (and Mister Softee makes frequent visits) in case you need snacks (or coffee). Free kids’ programming from Center City District usually comes in the summer, so your entire day is now planned. This little paradise on the Parkway is worth making the trip from anywhere in the city.
210 North 18th Street; 9 a.m.-5 p.m. 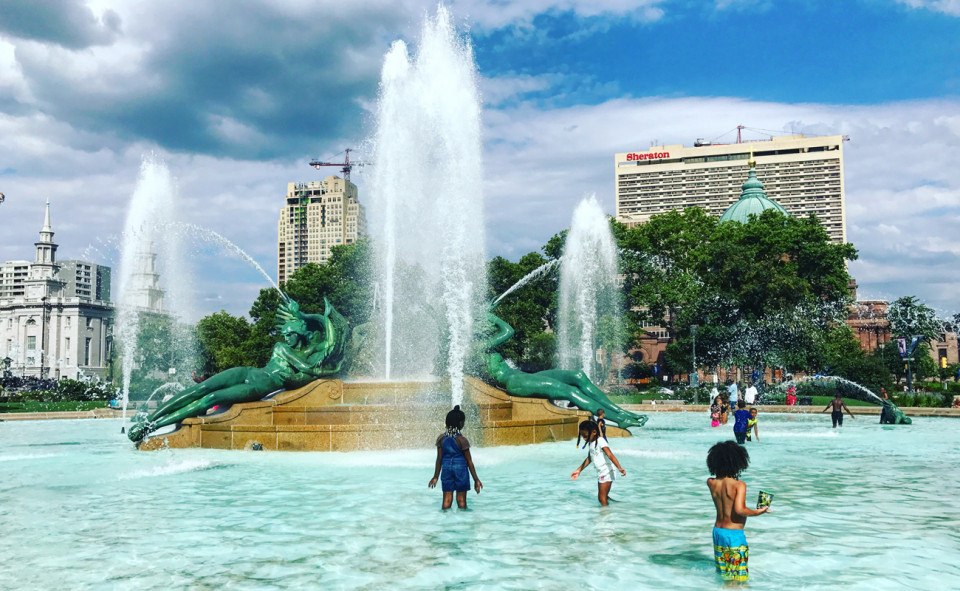 Shot Tower’s beautifully kept little sprayground has lots of ground jets and a brightly polka-dotted rubberized ground. Built on the historic grounds of America’s first gunshot manufacturer, this Queen Village hotspot is close to the river, so you can pop by to enjoy attractions like Washington Avenue Pier and the new river trail if you want more to do.
131 Carpenter Street; noon- 5 p.m. (Note: the Friends of Shot Tower run the sprayground on weekends, and water is contingent on someone present to turn it on, so check their Facebook page for any changes in schedule.)

Weccacoe’s spray area has benches in the shade, a feature surprisingly lacking at many spraygrounds. It’s not far from Shot Tower, so it’s another good Queen Village option.
405-25 Queen Street; 11 a.m.-7 p.m.

This Fishtown space features a colorful Mural Arts piece that extends from the Rec Center’s walls to the sprayground itself, making it more visually unique than most of the similar straightforward playground sprinklers. Plus, it’s self-serve so you don’t have to worry about someone being around to turn it on — and kids love hitting the button on the wall to make the jets spray up from the ground!
1800-56 Blair Street; 9 a.m.-9 p.m. 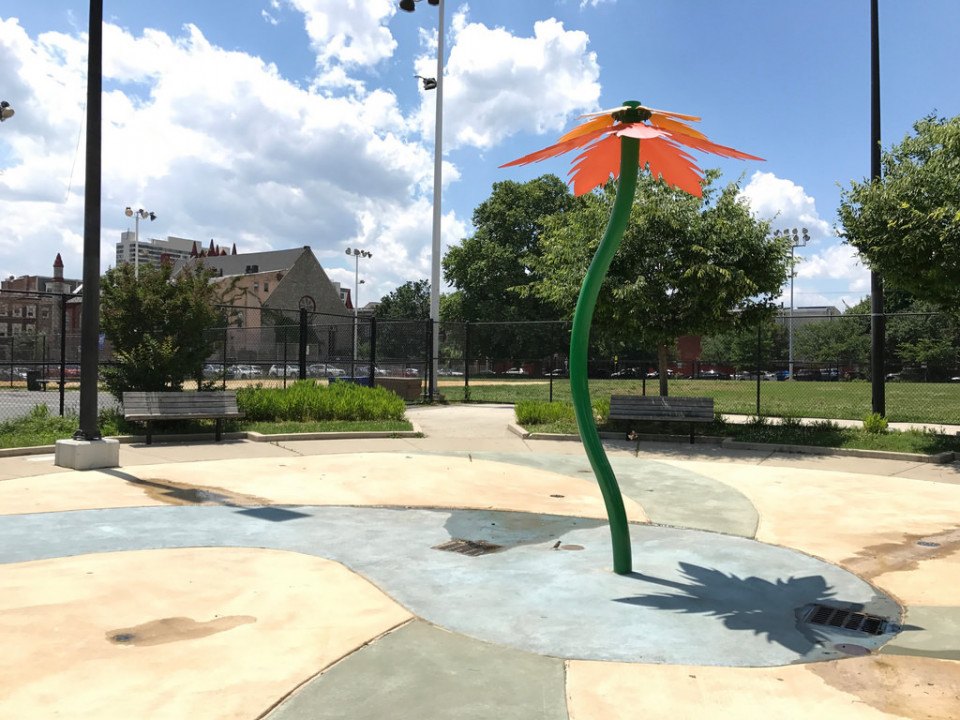 This Spring Garden playground features a giant flower sprinkler that would not look out of place in a Dr. Seuss book. There are plenty of benches, too — always a plus. There’s also the nearby Francisville Playground (Cameron Street, near 18th Street), which has a pool!
1800 Wallace Street; 11 a.m.-7 p.m.

We’re talking sprinklers and jets, y’all, and plenty of space to run around in them. It’s an awesome park, and very helpful that everything is fenced in on a flat space, so the kids can really roam far away and they’re safely within your eye-line. There’s also playground equipment. The park is also near Federal Donuts, which is nice for a treat.
250 Reed Street; 2-7 p.m. on weekdays, noon-5 p.m. on weekends.

This West Philly park has a good-sized sprayground with a whole bunch of colorful sprayers in the shape of rainbows, palm trees and cacti. The water seems to get turned on a little later in the day at this one, so don’t plan a pre-lunch splash at this colorful location.
1414 South 47th Street; 1-8:30 p.m. 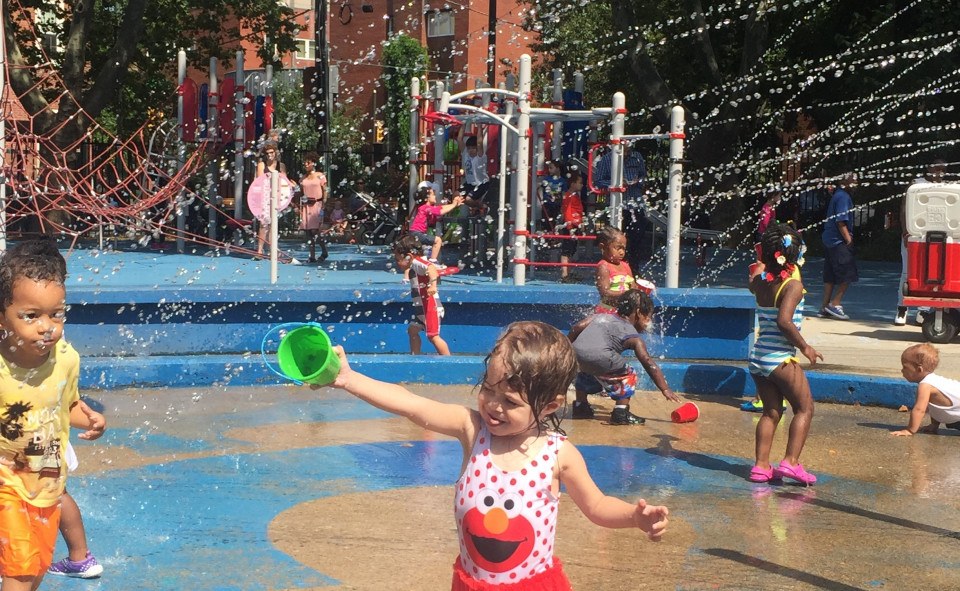 It’s a simple sprinkler system — a round concrete ring with a spray pole coming up — but it definitely does the trick. (Same with the Starr Garden playground sprinkler at nearby 6th and Lombard.) Also, the playground itself is one of the better ones in the city and the adjacent dog park makes for some great entertainment while you dry off.
1000 Lombard St.; Seger’s sprinkler is usually on when the park is open. That’s 9 a.m.-8 p.m. every day of the week, however know that weekend hours are kept by volunteers.

A classic sprayground with jumping water jets and plenty of room to frolic. Note: Not a ton of shade at this one, so go prepared for lots of rays.
7001 Germantown Avenue; 1-7 p.m.

This spot in Northeast Philly is another big, colorful sprayground with both sprinklers and jets inside a big park.
1101 East Cayuga Street; noon-6 p.m. on weekdays, 10 a.m.-5 p.m. on weekends

Want more? Check out the city’s list of spraygrounds and misters, complete with a map.