Fourth of July Fireworks and Celebrations Around Philadelphia

Your guide to Independence Day festivities. 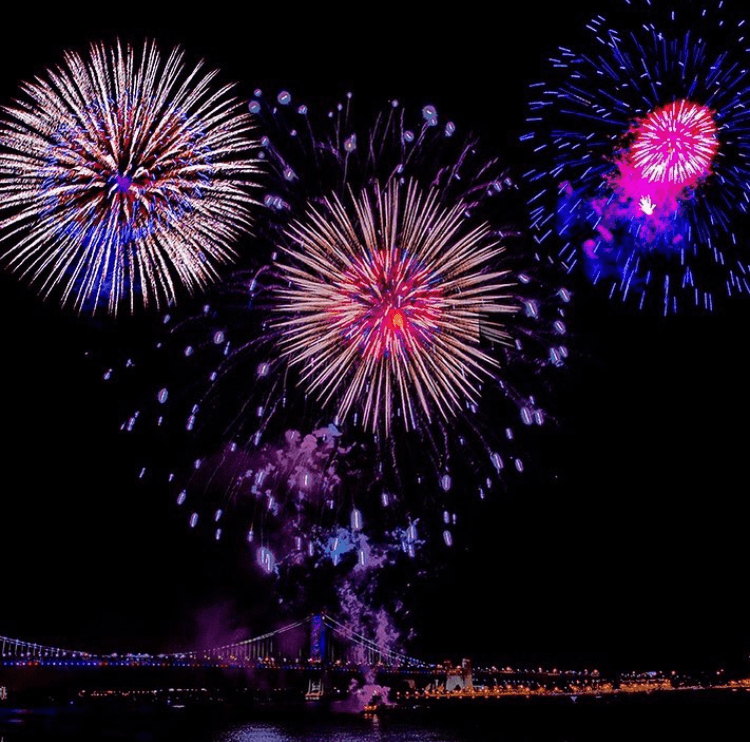 Your 2019 guide to the best Independence Day firework shows and parties in the Philly area.

Wawa will be sponsoring its annual weeklong celebration of our nation’s birthday this summer. From June 29th through July 4th, everyone is invited to America’s birthplace to enjoy block parties, concerts, fireworks, and more. Multiple locations; see festival brochure for specific details about each event

Prior to the beginning of the Independence Day Parade, everyone is invited to Independence Hall for a morning of music and inspiring speeches. This year’s ceremony will feature the Philly POPS, the United States’ largest standalone orchestra. Thursday, July 4th; free. Ceremony begins at 10 a.m. at Independence Hall, 520 Chestnut Street

Philadelphia’s annual Independence Day Parade begins and ends on Chestnut Street this summer. Join dozens of marching bands, dancers, and floats for this celebration of the United States.

Join Skippack Village at the parade down Skippack Pike, barbecue at Parc Bistro, and watch a spectacular display of nighttime fireworks in Palmer Park. Thursday, July 4th; free, with food for purchase. Fireworks at dusk, at Skippack Village

Join Narberth at their annual Independence Day Carnival for food, games, contests, and parades. Later on, go to Narberth Playground to hear music by the Zing Kings, and watch a dazzling fireworks display. Thursday, July 4th; free. Fireworks at dusk, at Narberth Playground

Lounge on the grass and listen to live music before watching fireworks light up the sky. Thursday, July 4th; free. 6:30 p.m., at Eagleville Park

Kick off your 4th of July celebration at 4:00 p.m. at the “Grand, Glorious, Patriotic” Parade begins its march through the streets of Glenside. Then, as night falls, watch as fireworks explode over the Abington Senior High and Middle School. Thursday, July 4th; free. Fireworks after dark, at Abington Junior and Senior High Schools

There will be an epic block party starting on Main Street, fully equipped with live music, fun activities, food, and craft vendors. Norristown will also be bringing back the Elmwood Park outdoor concert and concluding its full day of festivities with spectacular fireworks. Thursday, July 4th; free. Events from 10:30 a.m. until dusk, at Main Street (from DeKalb to Arch Street) for the block party, and Elmwood Park for the concert and fireworks 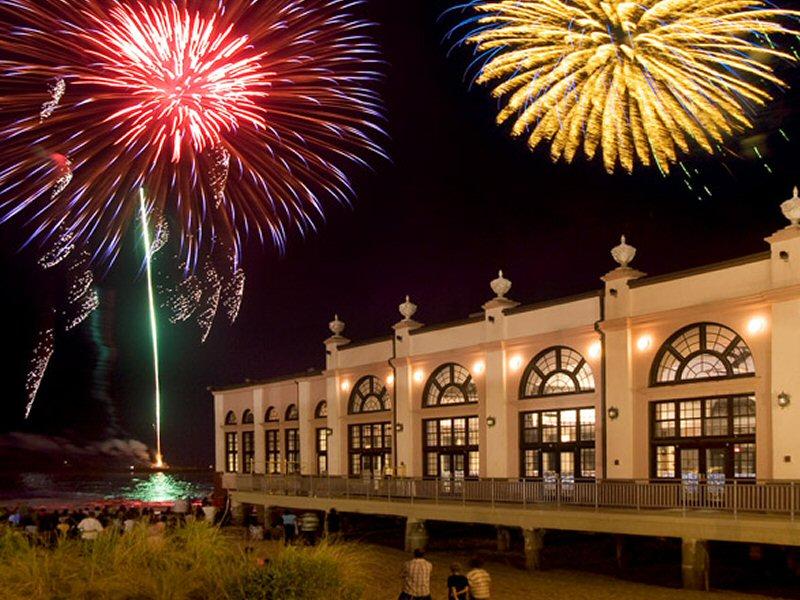 Fireworks at the Ocean City Music Pier. Photo via www.ocnj.us

This year, Ocean City will be starting their 4th of July celebration with two morning bike parades. Then, at 7:00 p.m., the kite-flying competition will take place, followed by entertainment and fireworks. Thursday, July 4th; free. Fireworks at 9 p.m., at Ocean City Music Pier

Both the Independence Day Family Parade and the Patriotic Pooch Parade will be taking over Wildwood at 9:00 a.m. this 4th of July (prizes will be awarded to the best-dressed dogs). Later on, after the sun sets, head to the Wildwood boardwalk for an unforgettable fireworks show. Thursday, July 4th; free. Fireworks at 10 p.m., at Wildwood

4th of July Fireworks @ Cape May

Watch from the beach or promenade as fireworks light up the Cape May sky. Thursday, July 4th; free. Fireworks begin at dark, at Cape May beach

Not sure what you’re looking for? No need to fret — Avalon has it all: field games in the morning, a variety of fun evening festivities (including the 7:00 p.m. Bay-Atlantic Symphony Concert), and, to top it all off, nighttime fireworks set to patriotic music. Thursday, July 4th; free. Begins with the parade at 11:30 a.m. and ends with fireworks at 8:45 p.m., at Avalon Beach

Spend your evening down at Long Beach Boulevard and head to 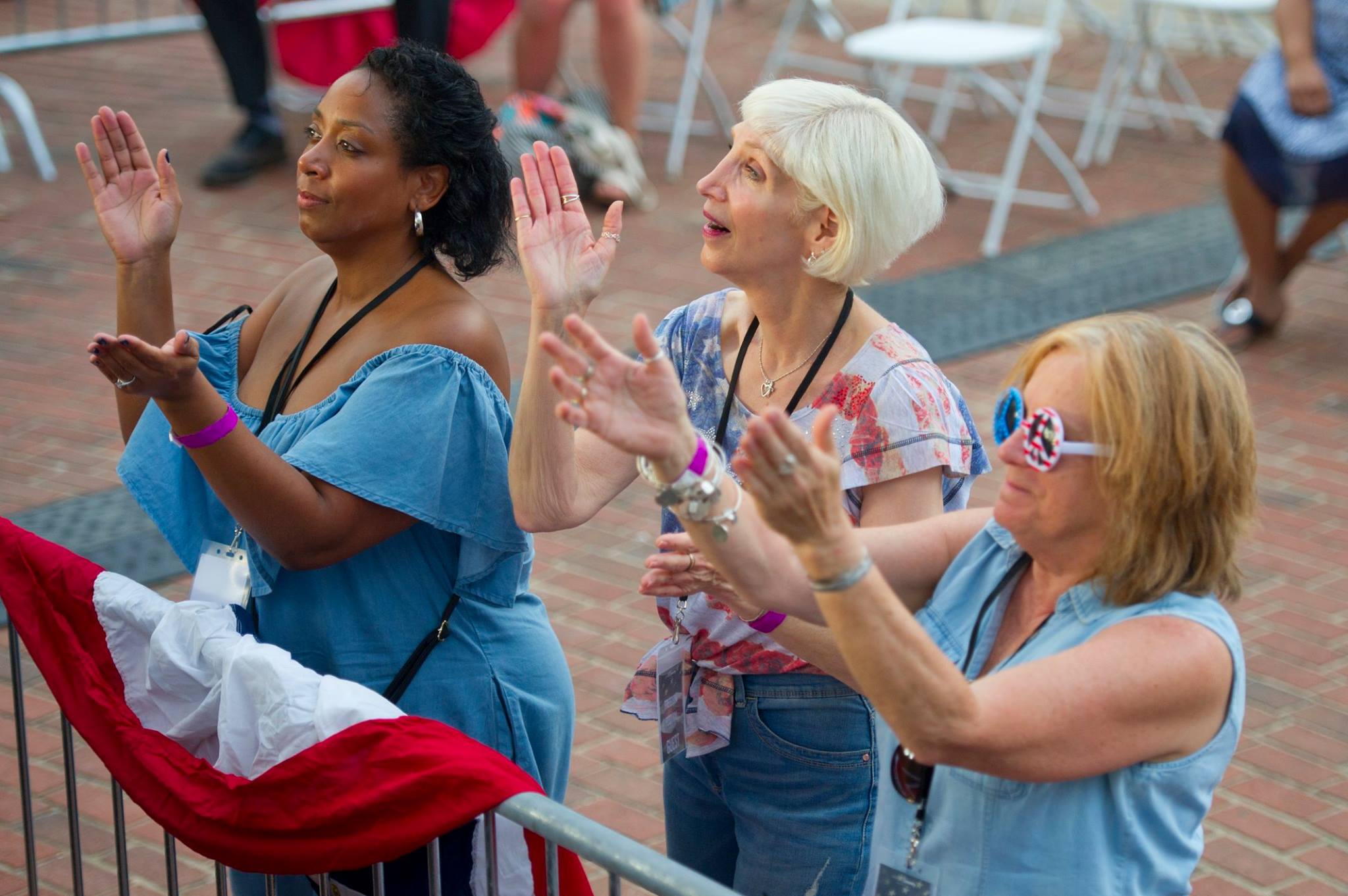 The Yankee Doodle Do Parade begins at 10 a.m on Thursday, July 4th. And beginning at 6 p.m., downtown will be filled with live music, food, and more, with fireworks lighting up the sky around 9:20 p.m. Wednesday, July 3rd; free. All-day event, at Downtown Haddonfield

Festivities start at 6 p.m. followed by fireworks at dusk. The rain date for this event is Friday, July 5th. Wednesday, July 3rd; free. Fireworks at dusk, at Freedom Park

The festival begins at 5 p.m. with a salute to our veterans, followed by the UCC Royal Brass Band taking the stage at 6:30 p.m. with spectacular fireworks show at 9:30 p.m., Thursday, July 4th; free, at Wiggins Waterfront Park

Attendees will have the opportunity to decorate their bikes before taking a community bike ride for the Annual Fourth of July Bike Parade. TO THE MAX will take the stage at 6:30 p.m. followed by a fireworks display. Thursday, July 4th; free. All-day event, at Collingswood High School 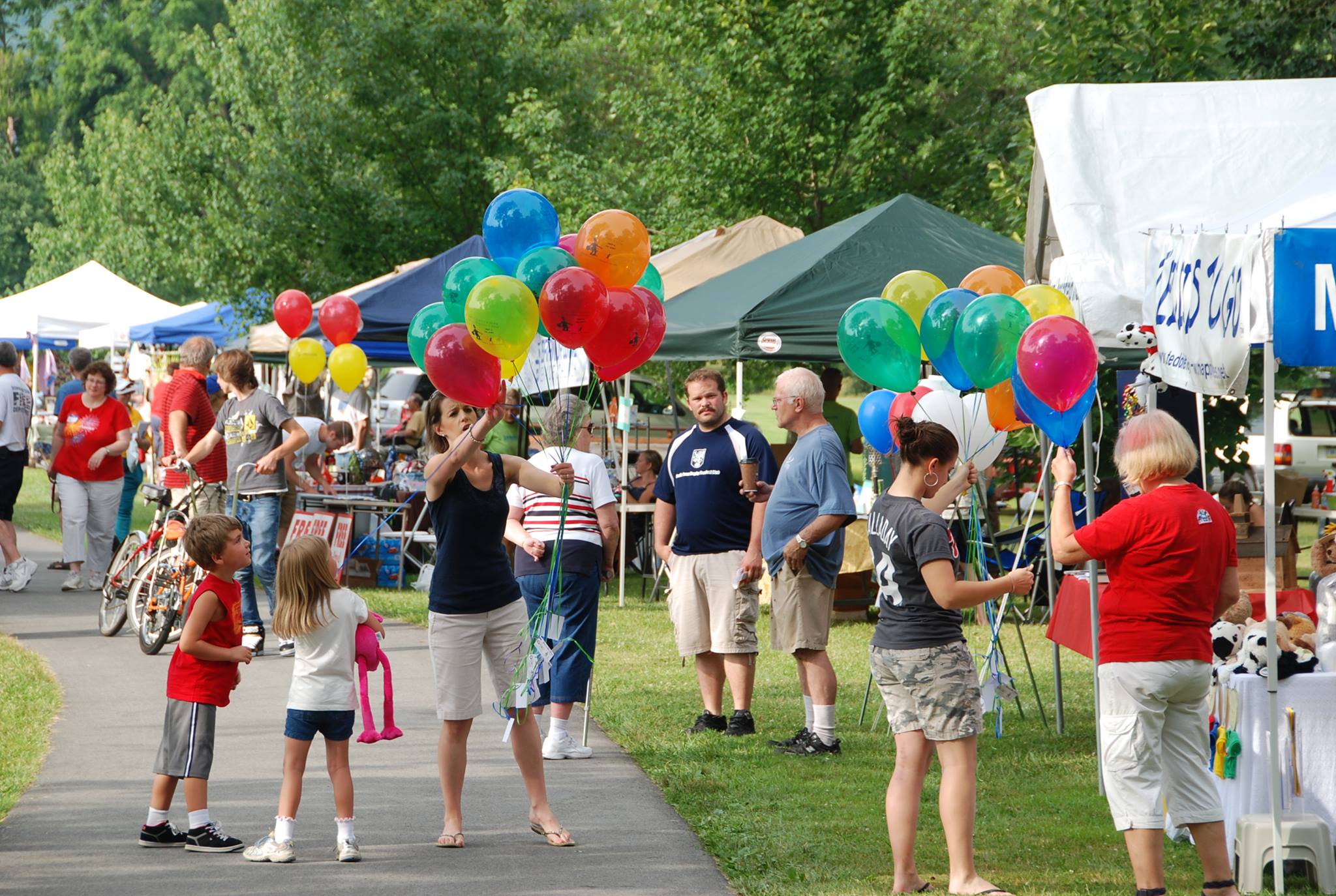 Celebrate Independence Day on a weekend at the park with Herr’s sample snacks, a live rock concert, and a big spinny contraption called an Orbotron! Saturday, June 29th; free. Gates open at 6 p.m. with fireworks at dusk, at 150 Park Road in Nottingham

Downingtown’s annual Good Neighbor Day kicks off with their Run For Life 5K Freedom run and walk at 8:00 a.m. After you work up an appetite, relax with food, carnival rides, games, and music before the big fireworks show. Thursday, July 4th; $20 for race registration. Fireworks at dusk, at Kerr Park, 1 Park Lane

Have other plans during the day but don’t want to miss the fireworks? Bring a picnic or enjoy the vendors with the family for a live performance from the Chester County Band before the show. Thursday, July 4th; free. Fireworks at dusk, at 500 Lee Road in Wayne

Learn about the birth of our nation at Valley Forge’s Community Picnic in the Park. This annual event offers interactive demonstrations, guided tours, and historical games, complete with music and a cookout. Thursday, July 4th; free. Festivities start at 11 a.m., at 1400 N. Outer Line Drive, King of Prussia 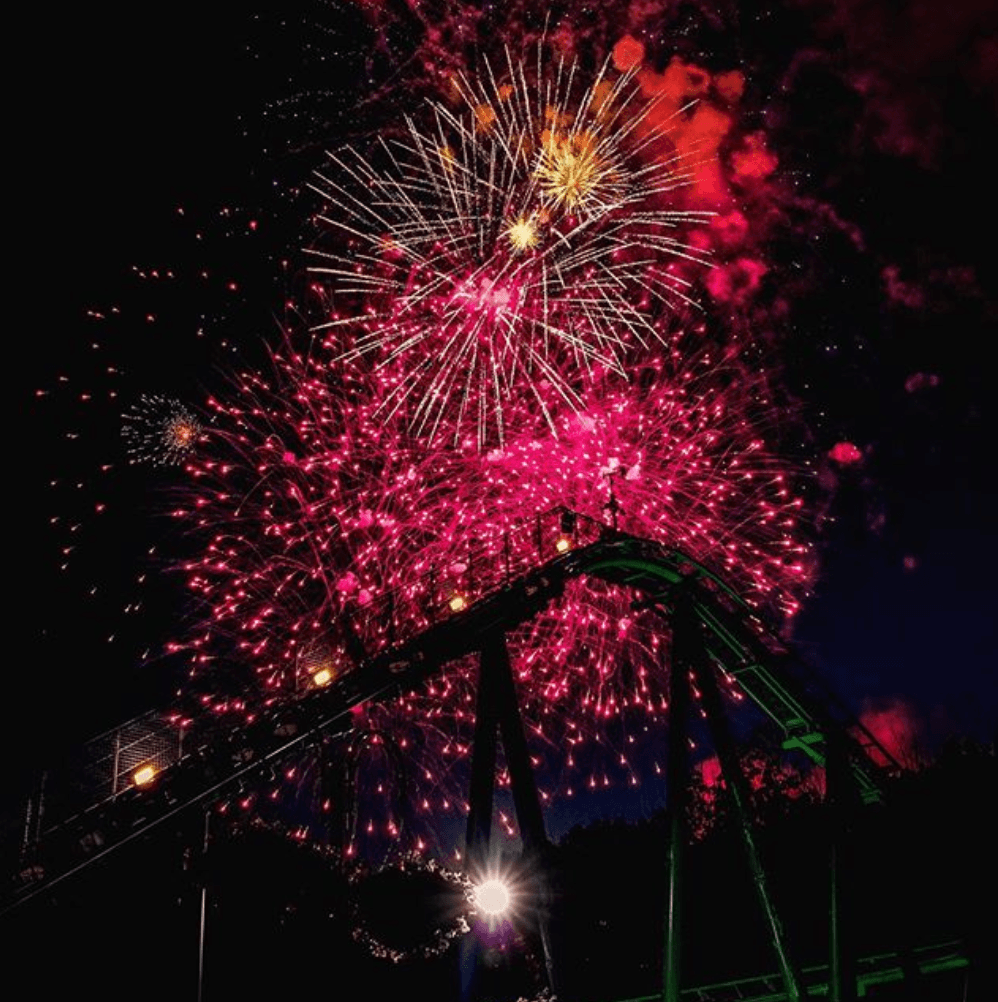 C is for Celebrate: 4th of July @ Sesame Place

Washington Crossing Historic Park is hosting several fun events to celebrate America’s independence. You can watch live historians demonstrate their crafts, tour historical buildings, and afterward hear the readings of the Declaration of Independence starting at 12:30 p.m. But, if you want the celebration to keep on going- you can join the Colonial Free Tours on the 5th and see the Revolutionary Car Show on Saturday, July 6th at 10 a.m. Admission to the event is $8 for adults age 12 and over, and $4 for children ages 5-11 for 4th of July admission. Each day’s celebrations begin between 10 a.m. and 12 p.m., at 1112 River Road, Washington Crossing

Races, a children’s bike decoration parade, watermelon-eating contests, oh my! Fonthill Castle’s got the perfect line up for a patriotic day filled with family fun. Thursday, July 4th; $5 for ages 16 and up. Festivities start at 12 p.m., at 525 E Court St in Doylestown

There’s no such thing as overdressed for this parade event! Decorate your bikes, wagons, strollers, and floats for a promenade down Trenton Road to Twin Oaks Park. Thursday, July 4th; free with registration. Parade starts at 9 a.m., at 700 Veterans Highway, Levittown