Your Guide to the Best Dog Parks in Philadelphia

By Erika Lewy and Michaela Althouse· 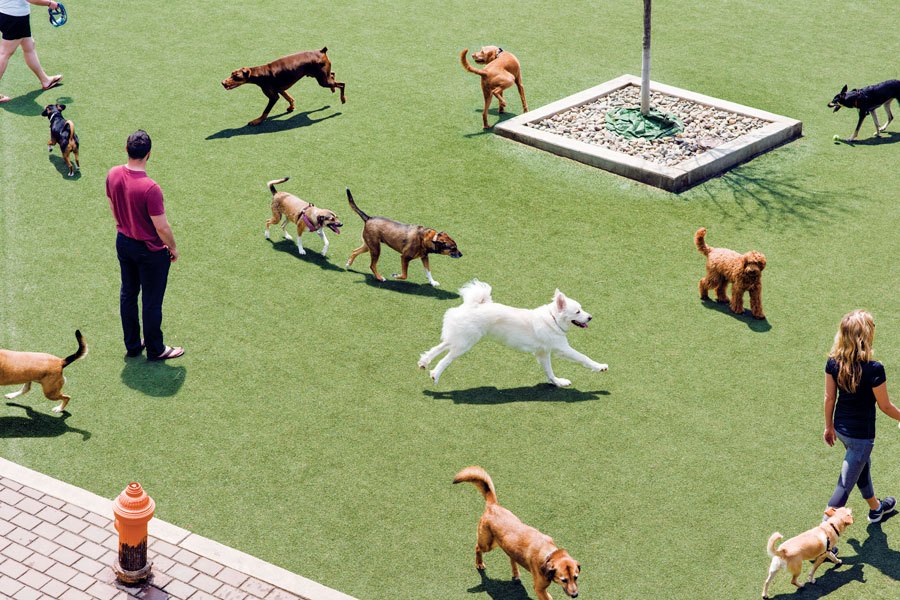 Looking for more dog-friendly things to do in Philly? Check out our guide here.

Whether your pup is portable or the size of a small horse, hyper or laid-back, social or skittish, there’s a dog park in town that’s perfect for your pet — and you.

37 East Palmer Street
The vibe: A small dirt-and-cobblestone enclosure, part of a larger green space. There’s not much shade, so come armed with sunscreen and plenty of water for you and your pup.
Best for: Social butterflies (and their pets). The park, which neighbors transformed from a concrete slab in 2014, has an engaged group of volunteers.
The scoop: Former Palmer president Jennifer Nelson says the park has received $41,500 in grants to install water and a pump and solar lighting in the summer of 2016.

25th and Spruce streets
The vibe: The fanciest of all of Philly’s dog parks, this sweeping synthetic grass courtyard on the river is equipped with a nice drinking fountain and sections for large and small pups.
Best for: Froufrou Fidos and owners tired of muddy romps. Paws stay clean on turf known as “K9Grass.” Think of it as a miniature Vet Stadium, but with less risk of blowing an ACL.
The scoop: The park is along the train tracks, and conductors aren’t shy about blowing the horn. Stay away if your dog can’t handle the noise.

4300 Silverwood Street
The vibe: A petite dog run that’s mainly dirt and wood chips — a state the locals are working to improve.
Best for: “Well-trained dogs who aren’t going to try to make a break for it,” says local dog walker Kat Lambert. Two women raised money for temporary fencing along the low wall around the run so pups can no longer escape.
The scoop: Make Pretzel Park one stop on a tour of the neighborhood. Lambert recommends the nearby Manayunk Towpath for a stroll, then dining alfresco at pooch-friendly Winnie’s LeBus, where the staff puts out water bowls.

900 North Orianna Street
The vibe: An acre-sized members-only park where trees and benches abound.
Best for: Dogs that need room to roam.
The scoop: For access, you’ll need to register online, attend a casual 15-minute orientation, and give Fido a VIP dog tag. Signing up is free, but a $50 annual donation is recommended.

1 Delaware Avenue (along the parking lot), Penn’s Landing
The vibe: A narrow, half-block-long gravel run with separate sections for little and large breeds.
Best for: Small and medium-size dogs. There’s not as much space as at some of the city’s other runs.
The scoop: The park’s best feature is its view — from the north-facing benches beneath shady birch trees, you can take in views of the Ben Franklin Bridge and boats cruising along the Delaware.

3201 Richmond Street
The vibe: A labor-of-love pavement dog run maintained by volunteers. In 2015, they spent days converting an abandoned lot filled with flotsam into this pet paradise.
Best for: Well-trained medium-size dogs.
The scoop: Locals regularly replenish the doggie bags, but you’ll need to provide your own water for now.

200 Catherine Street.
The vibe: A clean, cozy 150-by-40-foot gravel dog run within the larger park. The run has a hose, but doggie bags are BYO.
Best for: All dogs, regardless of size.
The scoop: QVK9, the neighborhood pet association, runs regular social events. Highlights include a park cleanups and monthly “Yappy Hours” at nearby pet-friendly restaurants.

4117 Mitchell Street
The vibe: A pocket-sized, grass and dirt space for members only, with humble beginnings as a former vacant lot that gained a lease from the city in 2014.
Best for: Large, well-trained dogs looking for some freedom off the leash.
The scoop: Members can choose to pay a full $100 per year or $25 each quarter and have to give four volunteer hours per year.

Corner of 9th Street and Dudley Street
The vibe: A petite gravel lot with a tree for shade, benches for sitting, and logs for the dogs to play on.
Best for: Dogs of all shapes and sizes.
The scoop: Sure, you can chill with your dog on the ground — or, on Sundays, you can take your four-legged friend up the elevator to Bok Bar, which is dog friendly one day a week.

1020 Lombard Street
The vibe: A well-kept, fenced-in dog run that takes up nearly 10,000 square feet of small Seger Park. The park association replaces wood chips once each year.
Best for: Large and small dogs, newbies and veterans alike. Regulars are eager to advise on park etiquette and share the phone numbers of their dog walkers.
The scoop: The park hosts seasonal events for owners and pups alike. This summer is their second annual Woofstock live-music event, and fall brings the pun-loving Howl-o-ween and Santa Paws. An annual donation of $50 is recommended.

Originally published as “This Town Has Gone to the Dogs” in the July 2016 issue of Philadelphia magazine.