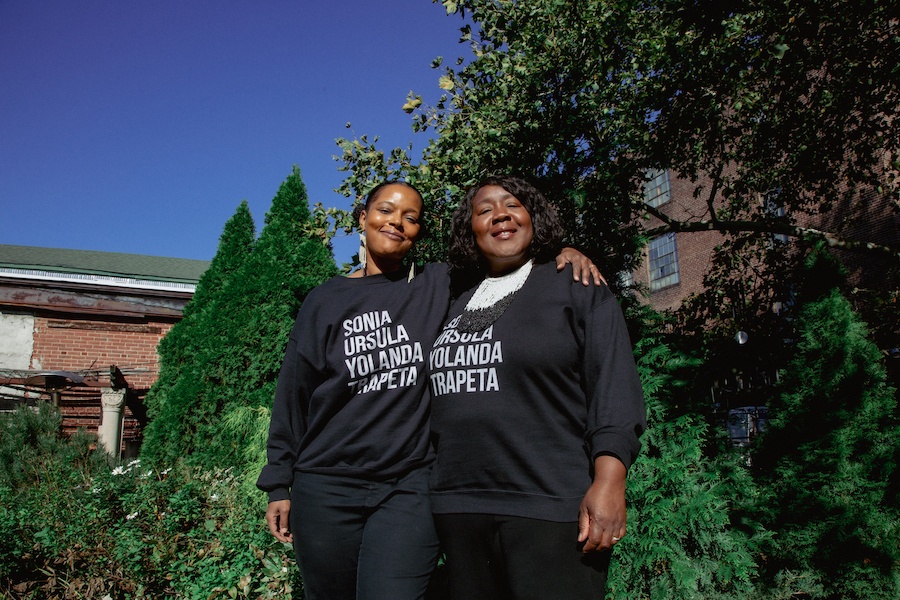 Though their project ConsenSIS has been around for less than a year, former Philly poet laureates Trapeta Mayson and Yolanda Wisher have known each other for 25, linked through their craft. Their launch event this week at Awbury Arboretum promises to be much like the poetry readings that brought them together in the late ‘90s, with a focus on preserving the legacy of Black women and femme poets in Philly.

The two-part gathering at Awbury Arboretum on July 30 is inspired by a scene from Toni Morrison’s Beloved, a novel the two use often when teaching the works of Black women writers at The Rosenbach.

“There’s this metaphor of the sacred space where Black folks can gather. To feel free, to feel whole, is something that we’ve tried to replicate in all of our events, but especially in this one,” Wisher says.

In May, public art nonprofit Monument Lab launched a nationwide commemorative campaign to reimagine monuments and materialize the living history of different neighborhoods, cities and regions. The initiative started as a call to artists, activists, educators and organizers like Mayson and Wisher, who’d been considering the void in tributes to local literary legends and the lack of archiving the work of Black women writers. With support from The Andrew W. Mellon Foundation, the initiative provided each selected group with funding for their hyperlocal projects and the data collection involved in them.

For ConsenSIS, this took the form of a survey seeking to count, gather and memorialize Black women and femme poets in Philadelphia and surrounding counties.

“It’s a combination of questions that seek out demographic information, as well as narrative information. How did you become a poet? Who were the people who influenced you and kept you going? What resources do you need to continue to do the work that you do or to be more visible?” Wisher says. “We have our sense of the anecdotal understanding of this community, being a part of it ourselves. But we really wanted to create some data that could be shared not only with the city, but also nationally.”

Documentation holds a deep importance to Mayson and Wisher. Amid contention about monuments in Philadelphia, the two spent time considering what it meant to make a monument to Black women and femme poets in a city that has nothing of the sort. What would it look like? For a while, they toyed with the idea of a more traditional physical marker, but felt locked in by a sense of “place.” Then, inspired by memories of the 1997 Million Woman March, their planning took a temporal turn: physical presence as art.

Saturday’s event will start off as retreat for Black women and femme survey-takers to “rest, write, and commune.” Alongside workshop opportunities and lunch provided by Smokin’ Sone’s Fresh Grill, the event will be documented in photo, video and audio. And as for the public, local aesthetes can register for the second half of the day – a session of poetry readings from eight writers, with refreshments and giveaways.

Of their plans for the fall, Wisher says to expect “a procession of Black woman and femme poets through a major thoroughfare in Germantown. We’re excited to combine this procession with things like sound and movement, to really have an impact and make a scene in Germantown for a short time and to document that,” she continues. “A big part of the gathering on the 30th — and this future event — is creating an archive of this work that lives on.”

Stay up to date with their work planning the procession on their website. In the meantime, anyone can support the effort by simply being a patron of the arts, Mayson says: Buy books, attend meetings, donate, read and listen.