The Fashion District’s new experiential gallery is built to be enjoyed, not just Instagrammed. 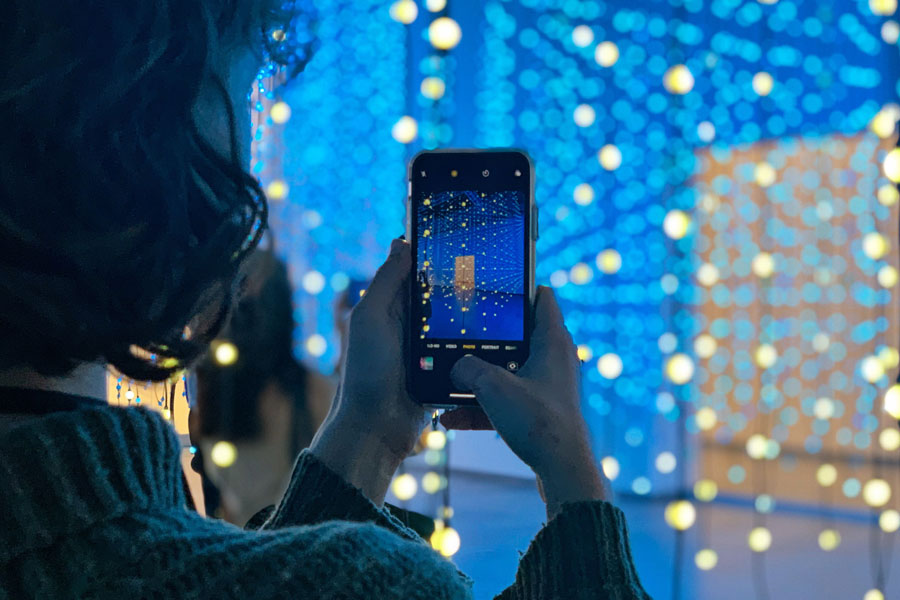 “Experiential” art installations aren’t a new concept. A few of their hallmarks: long lines, poppy color schemes, themes evoking nostalgia and happiness (Ice cream! Candy! Literally just the word “happy”!), and ball pits (there’s nearly always a ball pit). Oh, and the fact that the minute they touch down in a city, they’re all over everyone’s Instagram feeds.

The problem with these “experiential” installations is, of course, the experience part. The combination of social-media-driven FOMO and the fact that these pop-ups are a limited-time-only experience can stir up a frenzy. After visiting as many of these Instagram playgrounds as possible, Amanda Hess wrote for the New York Times that the primary experience she had was waiting.

At the Color Factory, I first waited for half an hour past my ticket time, outside in the 90-degree heat. Then I waited inside the lobby, just outside a roped-off area. After being allowed inside the roped-off area, I was offered mochi ice cream while I waited. Then I was shown an orientation video and ushered into a rainbow-painted hallway, which turned out to be another line in disguise.

When I first started seeing promos for Wonderspaces, a 24,000-square-foot gallery that just opened inside the Fashion District — where the very-Instagram-friendly Candytopia is currently open through February 17th — I assumed it fell in line with these other “experiences.” That it was another glorified $38-a-ticket Instagram backdrop. A short-term pop-up aiming to cram through as many visitors as possible each day, long lines be damned. That it’d be cheesy, devoid of meaning.

I thought there’d be a freaking ball pit.

But Wonderspaces isn’t built for Instagram, and it isn’t going anywhere anytime soon. Jason Shin, co-founder of Wonderspaces, says they’ve got a long-term lease on their Philadelphia space, and they plan on being here “forever.” While one or two works will begin to rotate out each month starting in the spring, there’s no reason to make a mad dash over there right this second. They’re limiting the number of people who can enter the gallery at one time to well below what the fire marshal would allow, Shin says, as they want the space to feel “activated, but not crowded.” 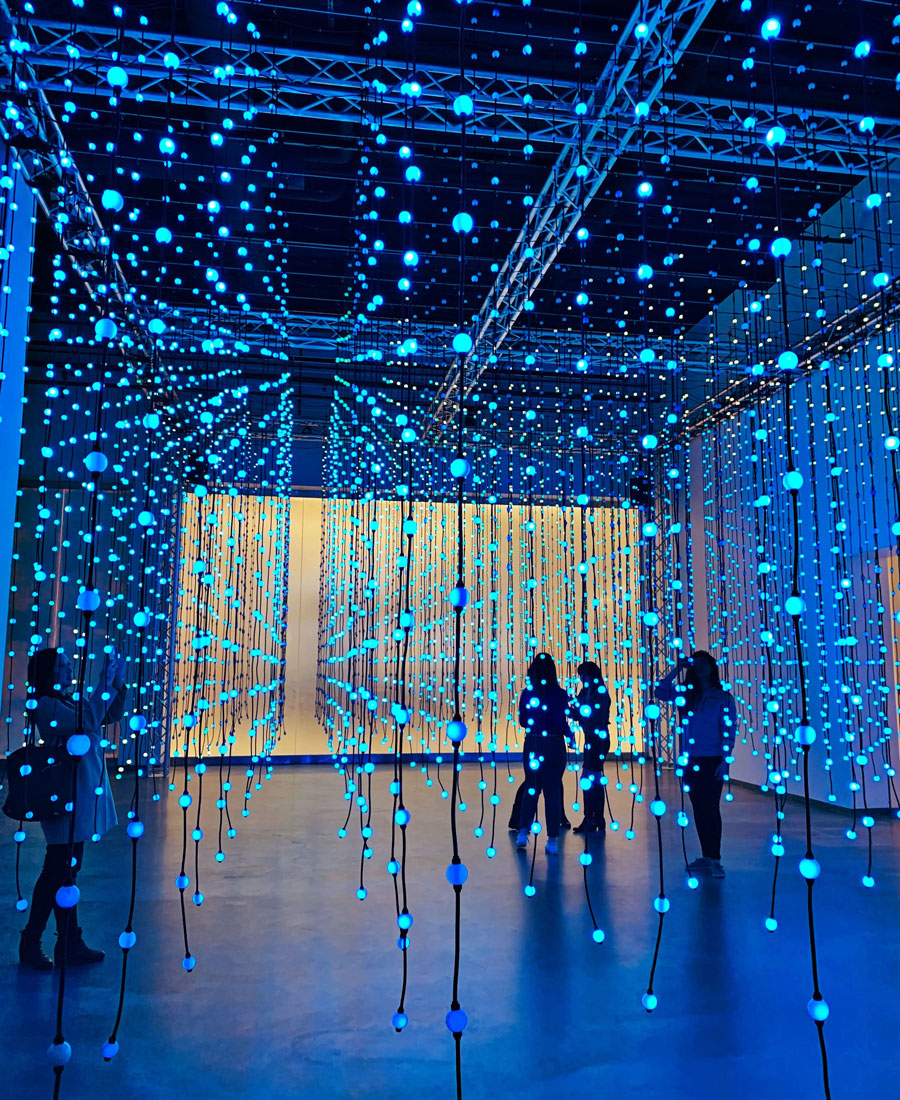 Inside “Submergence” at Wonderspaces Philadelphia. Photograph by Caroline Cunningham

Wonderspaces is a two-story gallery featuring 14 works by artists from all over the globe. If you’ve seen photos of anything from the exhibit so far, it’s probably Submergence, by the U.K.-based art collective Squidsoup. The 12-minute light show — which has popped up at Burning Man — is made up of over 8,000 hanging bulbs and is by far the most Instagrammy of all the current Wonderspaces exhibits. And while you can wander through the hanging, glowing strands of moving lights while snapping photos and filming videos, the point isn’t just to take selfies.

“We’re trying to serve a role in people’s lives that is that place of social gathering,” says Shin. “It’s not about taking pictures here. There are no hashtags on the walls. It’s the in-person shared experience, and that intention is different from other organizations.” 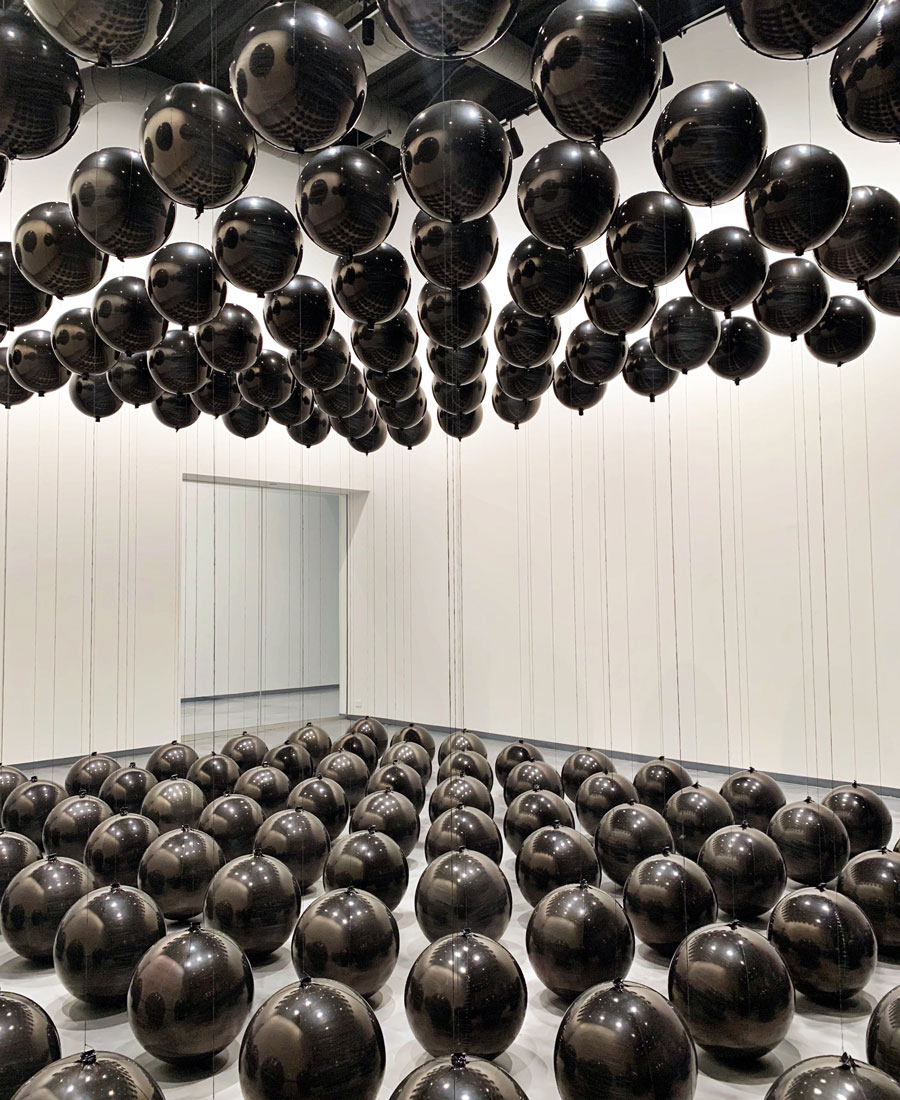 While Submergence isn’t the only Wonderspaces work that lends itself well to amateur photography — the exhibit next door is the striking Black Balloons, which plays with the concept of contradictions — there are plenty of works that can only be experienced in person. The gallery is host to two different virtual-reality films — one about the transition between life and death, the other about an alien abduction — as well as a wall where visitors can write “thoughts left unsaid” (as well as read other’s confessional words) and an aluminum ring covered in fishing line that’s illuminated by a spotlight so it glitters like a spiderweb. I tried to snap a photo of that last one on my iPhone, but the resulting photo looked like a flashlight glaring against a heavily scratched lens. Instagram couldn’t compete with reality here. 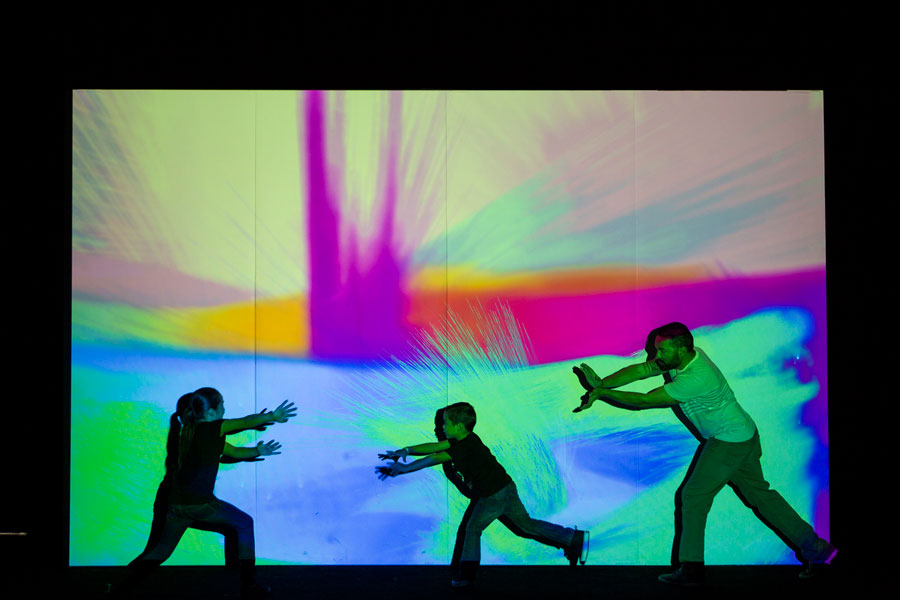 With “Body Paint” by Memo Akten, viewers can watch as a digital canvas is splattered with color in time with their movements. Photograph by Carly Matsumoto

But while Wonderspaces does seem to have a higher purpose than pure social media fodder, that purpose isn’t perfectly aligned with a traditional museum. According to Shin, Wonderspaces is intended more for social outings — it’s an alternative to date night at the movies. The founders secured a liquor license and placed a bar near the entrance of the gallery so you can buy a drink to sip as you wander the exhibits. It’s happy hour with art.

You also won’t notice any paragraphs on the walls to explain the works at Wonderspaces. This is to foster conversation — again, encouraging a social experience among visitors. It also helps contribute to Wonderspaces’ overall goal: to connect artwork with those who “don’t feel like art is for them” and to make the art gallery more accessible.

“We surveyed visitors in Scottsdale, where our first location is, about their relationship with artwork. Forty-four percent said they had never been to an art show before,” says Shin. “And now they have.”

It’s difficult to put Wonderspaces — which falls somewhere between a museum and pure entertainment — in a box. But that’s okay, because Philadelphia already has plenty of incredible museums. Wonderspaces is its own unique concept — and if it gets more people talking, thinking, and interested in experiencing art, that’s a positive thing.

Especially because there are no ball pits involved.

Wonderspaces is now open at 27 North 11th Street, inside the Fashion District. Tickets are $24 for adults; $20 for students, seniors and military members; $15 for kids three to 12; and free for children under three. Purchase tickets here.