REVIEW: In Detroit ‘67, Home is Where the Heart and Heartbreak Are 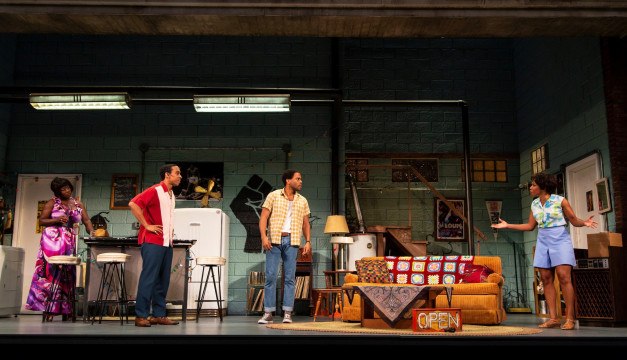 The basement recreation room of a Detroit home owned by sister and brother Chelle (Myxolydia Tyler) and Lank (Johnny Ramey) is modest, to say the least. But it’s rich in family history.

This cozy, pleasing space (set design by Riccardo Hernandez)—coupled with a nostalgic soundtrack of Motown faves—will have you smiling. So will the first scenes of Dominique Morisseau’s Detroit ’67, which begins with a charmingly ingenious premise: the siblings, along with friends Bunny (Nyahale Allie, in a scene-stealing performance) and Sly (Will Cobbs), will turn their makeshift bar into a private nightclub in order to make a little extra money.

But don’t get too comfortable with the shiny comic surface of Detroit ’67. There is more to Morisseau’s meaty play.

Many will suspect what’s coming from the title, which refers to an infamous and true historical event: a violent, multi-day confrontation between police and the African American community.

Detroit ‘67 moves from humor to harrowing reality, just as the basement itself—which once promised social cheer and maybe even a financial nest egg—will instead prove to be insufficient protection against an angry struggle where the balance of power is overwhelmingly one-sided.

Morisseau’s play has some flaws. It’s overlong, and the exposition is sometimes clumsy. That tonal mix—from high comedy to rage and despair—is bumpy.

More importantly, though, Detroit ’67 has heart and soul. The subject matter—and, at its best, the writing and the author’s palpable compassion—place it in the grand tradition of realistic American drama.

In fact, Morisseau seems very intentionally to be thinking in terms of canonical drama, as she evokes what I’m fairly certain are deliberate resonances.

One is to Lorraine Hansberry’s A Raisin in the Sun, with which it shares the theme of a tug-of-war over family inheritance where the female side favors cautious practicality, while the male looks for Big Dreams. (Guess who wins?)

Another subplot is, I think, meant to remind us of Amiri Baraka’s Dutchman. Lank discovers a young woman, whom we later know as Caroline (played by Ginna Le Vine), lying beaten and unconscious in the street. He brings her home, knowing full well that the fact she’s white could raise eyebrows, even within his family. Dutchman, provocative when it was written in 1964 and surely even more so now, suggested that the presence of an attractive young black male and an equally attractive young white female occupying the same space was in itself a recipe for combustion.

Detroit ’67 premiered in 2013, decades later than the Hansberry and Baraka plays. Morisseau’s play feels more comfortable with issues of sex, identity, and language (the N-word is evoked regularly and without apology in conversations). But it’s equally telling how many of the same issues are still with us.

Jade King Carroll’s fluid, energetic production doesn’t solve all the play’s problems, but it still makes a good case for Detroit ’67, which is well-acted across the board, with especially strong work by Ramey and Le Vine.

Flaws aside, it’s a big play with big ideas, and one that should be seen.