REVIEW: In Broken Biscuits at 1812, Too Much Charm Equals Too Little Payoff

This tale of terminally unpopular British teenagers feels like a 22-minute sitcom stretched to two hours. 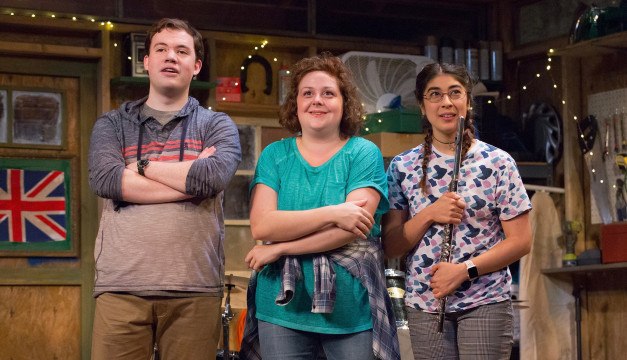 As lights go up on a Yorkshire garage shed, Megan, a mouthy, quirkily acerbic teenager, is huddling with Ben and Holly in what she describes as an EMOOF (that’s “Emergency Meeting of Our Friendship.”) The crisis, it seems, is that the three are terminally unpopular. The solution Megan proposes is that they form a band.

Not long after, I’m afraid I felt I’d had quite EMOOF too, yet the show went on for a while.

It’s not only that playwright Tom Wells’s “let’s make a band” idea feels stale; the bigger problem is that everything about Broken Biscuits is distilled down to minimal and bold strokes. Megan (played here by Amanda Jo Robinson) is fat; Holly (Leigha Kato) is a geek; Ben (Michael Macri) is gay. This isn’t my summary—it’s how they describe themselves, and Wells’ script rarely takes us beyond this too-easy stereotyping.

At 1812, all three actors are adorable, and if they don’t quite pass for 16, they’re a pleasure to watch. Lance Kniskern’s set is deliciously detailed and cozy. Jennifer Childs’ direction keeps things moving at a brisk pace.

But where’s the beef? Broken Biscuits is ostensibly about the pain of being a loser, but that rarely comes through. Meant to be outcasts, the trio is instead eccentric in the cutest possible ways. Hints of anger and pain are minimal, and from the start, there’s little doubt about the outcome.

Instead, we spend the next two-plus hours basking in the trio’s charm. Even when that charm is considerable, it’s still far too long for too little payoff. There’s a reason why the sitcom has evolved into the perfect 22-minute form.

Perhaps it’s pure coincidence, but I note a worrying trend among Philadelphia theaters this season. Broken Biscuits followed two other local premieres (Such Things as Vampires at People’s Light, and The Monster in the Hall at Inis Nua are the others) that seem like they are written for teenagers. All three are skillfully, stylishly produced; they all clearly have their hearts in the right place, with positive themes of inclusion and community. But none has the complexity or sophistication their subject matter deserves.

I’m all for bringing in younger audiences, and maybe there are grown-ups out there who find hope in the upbeat messages underlying these shows. Personally, after this trifecta, I just wanted to crawl into bed with a cigarette and a double-bourbon and watch Sophie’s Choice.