REVIEW: PSF’s All’s Well That Ends Well is the Comfortable Side of Extreme 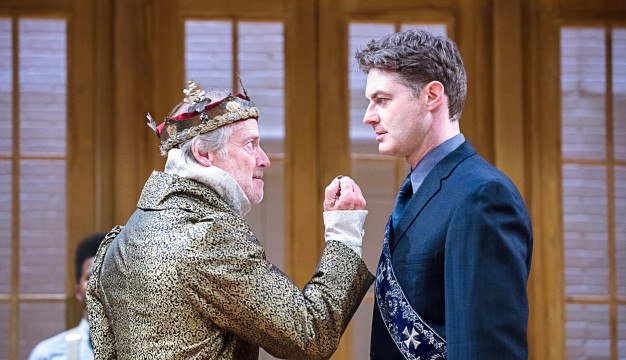 Greg Wood and Spencer Plachy in All’s Well That Ends Well at the Pennsylvania Shakespeare Festival. (Photo by Lee A. Butz)

I don’t know who at the Pennsylvania Shakespeare Festival came up with the “Extreme Shakespeare” brand, but they deserve a raise. It’s a great term, evoking for me the thrills, risks, and dizzying unpredictability of a carnival thrill ride.

What it actually means here is that a company of actors memorize the script on their own, then come together for minimal rehearsal. There’s no director; instead, it’s the cast who work out the concept, devise the staging, and even select their own costumes from the PSF shop. The practice is meant to come close to what might have happened in Shakespeare’s own time.

As seen in All’s Well That Ends Well, the result is pretty far from “extreme.” What I watched on opening night was instead—in ways both admirable and disappointing—smooth sailing.

Positives first. It’s gratifying—even astonishing—that the show looked so polished. Taking advantage of Steve TenEyck’s elegant bi-level unit set (it was also used for Twelfth Night), and the wonderfully intimate Schubert Theatre space, the complex entrances and exits were executed flawlessly and speedily (tempos are fast at PSF in general).

The performances too convey practiced authority. It makes sense under these conditions that the company features some well-loved veterans, including Susan Riley Stevens (as the Countess of Rossillion, who watches with a sense of rueful experience as young love thornily develops between Bertram, her caddish son, and Helena, a lowly doctor’s daughter), Greg Wood (Stevens’ real-life husband, here playing the King, whose illness is a catalytic plot point), Anthony Lawton (as Lafew, a court nobleman who provides merriment), and others.

On the whole, they deliver the goods, and if the result is seasoned professionalism rather than inspiration, we’re grateful to have them. I wish I could say that same about Jim Helsinger’s performance as Parolles, which takes a buffoonish character and pushes it into insufferably broad comedy. (The entire court moans every time Parolles appears, and I know just how they feel.) On the other hand, Eric Hissom as Lavatch the Clown delivers a strikingly off-beat, intriguing performance—more than the others, he takes advantage of this production’s looseness.

What is missing that might have been supplied by a director is a cohesive conceptual sense of what All’s Well is actually about. Usually, it’s categorized as one of Shakespeare’s “problem plays,” and indeed more problematic than many, with its odd mix of humor and mournfulness. Both of the lovers are in fact difficult to love. Bertram is self-centered and thoughtless; and while Helena is sympathetic, she’s a bit of a ninny. (It doesn’t help here that young actors Spencer Plachy and Emiley Kiser, both late additions to the cast, capture their character’s callowness but not the underlying depth.)

The result is an All’s Well that tidily delivers the framework of the play, without finding its heart and soul.

I sense that PSF’s Artistic Director Patrick Mulcahy sees these Extreme Shakespeare productions as an opportunity to mount some of the Bard’s lesser-known works. That seems logical, but I wonder if they’d be better off using this unusual platform to rethink some of the favorite canonical works. I could imagine, for example, taking on Macbeth or A Midsummer Night’s Dream—two very familiar plays that might reveal unexpected facets in this context.

As it is, I’m sure many will enjoy this All’s Well That Ends Well, a play that’s still a relative rarity in performance. For myself, I just wish PSF’s Extreme Shakespeare was more, well, extreme.