REVIEW: PSF’s Shakespeare in Love is a Midsummer Night’s Dream
Subscribe
Follow
I'm a scraper
This search result is here to prevent scraping

REVIEW: PSF’s Shakespeare in Love is a Midsummer Night’s Dream

Yet this extravagantly enjoyable show would benefit from being taken a bit more seriously. 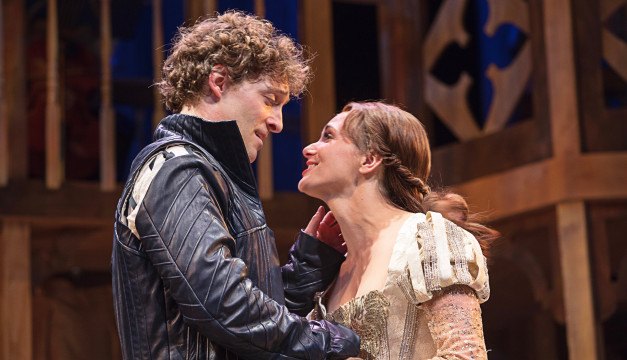 Luigi Sottile and Mairin Lee in Shakespeare in Love. (Photo by Lee A. Butz)

Over the past two decades, Marc Norman and Tom Stoppard’s Shakespeare in Love has—for Bardolators, especially—been the gift that keeps on giving.

First, as a beguiling confection of a movie, SIL captured the hearts of young and old, winning seven Oscars (Best Picture included) and revitalizing box offices—not only for the film, but also for regional theaters, which in the year or two following reported a significant bump up in attendance. Nearly 400 years after he died, William Shakespeare was suddenly back as a dreamy, sexy leading man, and audiences lapped it up.

Now, SIL in a sense has come home. A stage adaptation by Lee Hall, very faithful to Norman and Stoppard’s screenplay, is one of the most frequently produced plays in America. Seen here, in a sumptuous, high energy, extravagantly enjoyable production directed by Patrick Mulcahy, it’s a perfect anchor for the Pennsylvania Shakespeare Festival, offering a family-friendly companion to the Bard’s heavier works. (SIL plays in repertory with Richard II.)

Co-playwright Tom Stoppard has his own adoring fan base for sure, who will rejoice in his signature cleverness. SIL is a fictional account of the young actor—Will himself, in his first career—aspiring to become a poet of sonnets and theater. Part romance, part swashbuckling adventure, part bawdy farce, part speculative history (the young Shakespeare plies his new trade under the guidance of already successful Kit Marlowe), SIL does for Shakespeare what [title of show] (yes, that’s the title of a show) does for musicals. Those who know the plays well can congratulate themselves for recognizing the sly references planted throughout. Yet the show is so well-built, it will charm even neophytes.

A substantial part of SIL’s success is Mulcahy’s polished production, beautifully designed by Daniel Conway (scenery) Eric T. Haugen (lights), and Lisa Zinni (costumes). We have here one of the largest—and more impressively, most consistent and cohesive—ensemble casts I’ve seen in a long while.

In the lead roles, Mairin Lee (as Viola, an aspiring actress challenged by the male-only ordinance of English theater in 1593) is lovely, but a bit low-key. Luigi Sottile is a swoon-worthy Shakespeare—passionate, handsome, gloriously at home in both classical verse and broad comedy. Not since the young Kevin Kline have I seen an actor who brought together all these elements in such sublime balance.

Yet as much fun as I had at SIL, I wish Mulcahy—and, for that matter, Norman, Stoppard, and Lee—took the show a bit more seriously. In addition to paying homage to the greatest playwright in the English language, SIL celebrates the transformative magic of theater.

Such is that magic that audiences should—and potentially, can—believe a squeaky-voiced teenage boy (Matthew Camardo, adorable) as a beautiful Juliet, and a young woman (Lee) as the ardently boyish Romeo. Here, their gender-reversed scene together is played largely for laughs; I wish instead we could see in it the wondrous power of make-believe. This could be a more dominant theme throughout.

Still, there’s plenty of magic in the air at the Pennsylvania Shakespeare Festival. Sitting in the jewel box theater on a balmy July evening wove its own midsummer night’s dream-like spell.