REVIEW: Fun Home at the Arden Theatre Is Family Drama Seen Up Close

This accomplished, moving production puts the audience’s imagination to work. 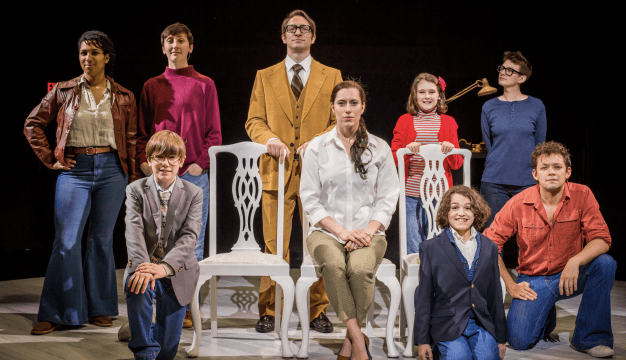 The Cast of Fun Home at the Arden Theatre. (Photo by Ashley Smith / Wide Eyed Studios)

I think of Fun Home as The Little Engine That Could musical. Based on a graphic memoir by lesbian cartoonist Alison Bechdel, the story—about growing up in a troubled home with a gay father who eventually commits suicide—is touching, sometimes mordantly funny, but often ineffably sad. Its bold sense of inclusion and central theme of family-love-and-dysfunction are edgy even by contemporary standards.

For all these reasons, while I had every confidence that the wonderful show made of it by Lisa Kron (book and lyrics) and Jeanine Tesori (composer) would be a cult hit when it premiered at the New York Public Theater, I never expected large-scale success.

Happily, the good don’t always die young. Fun Home got a successful Broadway transfer, and was rewarded with multiple Tony Awards and similar accolades. Yet the victory was bittersweet for me. I applauded the general public recognition that this beautiful show so richly deserved. But seeing it in New York and on tour, I was struck that Fun Home truly is a chamber work—large venues compromise its intimacy.

So the first thing to praise about the Arden’s exceptionally accomplished and moving production is that it’s perfectly suited to the space. I felt connected to Fun Home in a way I had not before.

Scale is one of many things that director Terrence Nolen’s production gets right. Along with scenic designer James Kronzer, he has devised an elegantly minimal production that puts the audience’s imagination to work. The home itself—specifically, the father’s obsession with restoring it to museum-quality standards—is a prominent metaphor. Here, we look at the fragmentary white bits of furniture and understand that we’re seeing them as Alison herself does, sitting and watching the action while she sketches. It’s quite a brilliant effect.

Musical and theatrical values are likewise very fine, starting with outstanding work by the two leading ladies, Mary Tuomanen as adult Alison, and Kim Carson as Helen, her mother. Tuomanen’s performance is a kind of acting lesson—much of the time, she’s quietly observing the action, but her face is miraculously alive to every detail, and her plangent singer-songwriter voice and sensibility is an ideal fit for Tesori and Kron’s songs.

Alison’s real-life father, Bruce Bechdel, must have been a complicated man—it’s certainly a difficult and complex role, by turns sympathetic and frightening. This is an unusual assignment for Ben Dibble, whose characteristic beguiling charm-tinged-with-nerdiness wouldn’t be the first quality you’d imagine. But it works, and more important, Dibble doesn’t shirk the character’s unpleasantness in a powerful, go-for-broke performance. He, too, sings wonderfully.

Occasionally, early in the show I thought this Fun Home could be darker. The depictions of sexual longing—both fulfilled and unrealized—are often played for humor, when they could be poignant. But the show gains gravitas as it moves on, and there’s no denying its shattering—yet also cathartic—power.

There has been much recent discussion in theater blogs about pro forma standing ovations, though I judge the instantaneous and nearly unanimous one that concluded the opening night performance to be the real thing. But the many tear-streaked faces I saw were far more telling. Don’t just take my word for it—see the Arden’s Fun Home for yourself.