REVIEW: A Sparkling and Poignant La Traviata at AVA

The vocal standards are high, and the pleasure of discovering new talent always exhilarating. 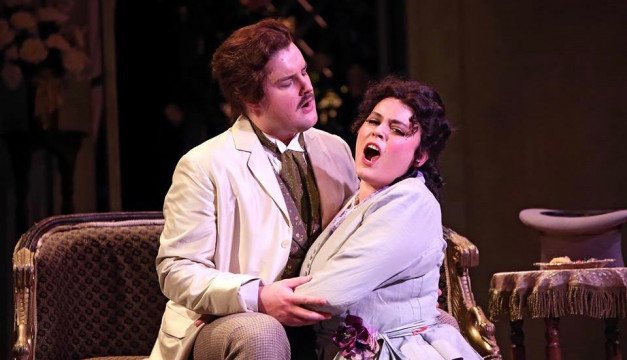 Oliver Sewell and Meryl Dominguez in La Traviata at the Academy of Vocal Arts.

Staged opera, intimate venue, promising singers. Through this simple recipe, Academy of Vocal Arts has for decades been satisfying its dual mission. First and foremost, AVA is one of the nation’s premiere advanced training programs for opera singers, with many success stories (including among the current crop of stars, Joyce DiDonato, Michael Fabiano, and Angela Meade). They are also a producing company, offering both opera and recital performances where the public gets an early preview of some very distinguished talent.

This year’s productions have been particularly strong, and AVA now caps their season with one of the most familiar and beloved works in Italian repertory—Verdi’s La Traviata. As often as I’ve seen and heard it, each time reminds me anew how powerful the work is… and how difficult. Happily, the company delivered often thrillingly here, finding both the sparkle and the underlying sentiment of this beloved work.

AVA’s staging by director Jeffrey Marc Buchman was basic but effective—a Klimt painting prominently displayed in Act II suggested some updating, but costumes and furnishings were otherwise quite traditional. Conductor Christofer Macatsoris was always alert to Verdi’s sharp rhythms, and though his tempos were occasionally extreme on both ends, mostly they worked. Initially, there was some scrappy orchestral playing, but it smoothed out considerably during the evening.

Of course, at AVA it’s the young voices that are front-and-center, and on this occasion, there was much to celebrate.

At the opening performance, Meryl Dominguez was Violetta. Her silvery, flexible soprano with its easy upper register is a natural fit for the first act especially. Indeed, she made a fine impression in “Sempre libera,” where keeping up with Macatsoris’s bracingly fast tempos was itself an achievement, but Dominguez also negotiated the details with precision and finesse.   I was even more impressed by her sculpting of the more lyric moments, especially “Dite alla giovine” in Act II. Dominguez’s middle voice is substantial, and if she hasn’t quite the darker colors ideal for the more dramatic outbursts, she gave the weighty moments their due through a keen sense of shape and scale. Words were always admirably clear, and she acted with taste and poignancy. I detected some nervousness early on, as Dominguez kept close watch on the conductor. But her performance grew in stature through the evening—she’s a major talent to watch. Brava!

Tenor Oliver Sewell (Alfredo) also showed exceptional promise, particularly for a Resident Artist in his first year at AVA. Though there’s room for more technical security, the lovely, burnished tone color, natural sense of line, and unstinting generosity were reward enough. And Sewell made far more of the small decorative flourishes (in “Libiamo, libiamo,” for example) than many internationally famous tenors.

Timothy Renner, whose exceptional performances in Il Trovatore, Das Rheingold, and Ariadne auf Naxos were highlights of the season, added a very distinguished Germont père to the list. His plushy baritone glowed with vocal health, and he brought considerable musicality and a dignified stage presence to the role.

The supporting parts were ably taken, particularly by Gabriela Flores (a rich-voiced Annina), and the ensemble made points vocally and dramatically.

La Traviata will play a total of six performances in three local venues. Several roles are double- and triple-cast, so you may see some different singers. But the standards are high, and the pleasure of discovering new talent always exhilarating.

La Traviata remaining performances are April 23, 26, 28, and May 1 and 5. For more information, visit the Academy of Vocal Arts website.