REVIEW: Noises Off is a Wild Night in the Theater

The Walnut Street production’s antic energy is both its strength and its weakness. 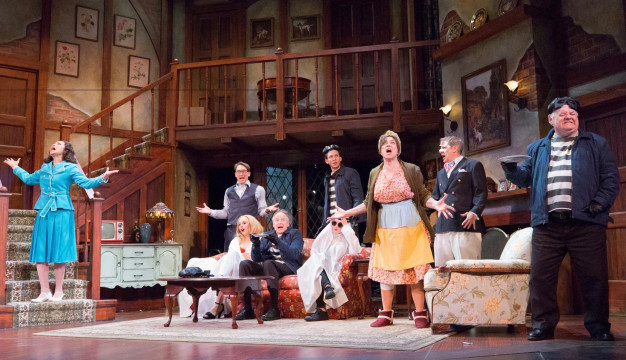 The cast of Noises Off at the Walnut Street Theatre.

From the moment Michael Frayn’s Noises Off premiered nearly four decades ago, it was rapturously anointed the greatest British farce ever written. Time has only burnished its reputation—on both sides of the Atlantic, as seen in three Broadway productions (so far), as well as countless mountings by regional and even community theaters.

We can’t get enough of Frayn’s ingenious look at a dilapidated but still hanging-in-there touring theater troupe, as they struggle to present a lame comedy called Nothing On to aging audiences in parade of British provincial towns. The trump card of Noises Off is that we see the action from both the front and behind the scenes—and what happens on-stage is nothing compared to the intrigue and chaos behind it.

Frankly, I find the passion for Noises Off—particularly here in the U. S.—somewhat mystifying. Not because of the quality of the play, mind you—it remains a virtual miracle of comic construction. But it’s so damn tricky, for audiences and performers alike.

To start, Noises Off is specific to a set of particulars that’s very, very English. Nothing On, the play-with-a-play, is meant to be a British sex comedy of a kind that was hugely popular in the 1960s, and very much in decline after that. In fact, the whole of Noises Off resonates with a post-War World II valiant struggle vibe—witness the almost co-starring presence of tinned sardines, a popular food staple in post-ration England.

Yet none of this dims audience enthusiasm, so maybe it doesn’t matter—Frayn’s set-ups are so good we love Noises Off even without quite understanding the reference points. (A line about British pianist Dame Myra Hess playing through the Blitz got a big laugh on opening night, though I doubt many in today’s audience know who she is.)

From the production side… well, where do you start? The accents are varied and challenging—and sometimes, since the actors play actors-playing-characters—more than one is needed. The physical business requires meticulous preparation (also, exceptionally adroit actors), and that’s only the beginning. There’s the whole of a play—really two plays (Noises Off and Nothing On)—to get exactly right, down to the last tiny detail.

At Walnut Street, under Frank Anzalone’s spirited direction, a likable cast full of Philly favorite actors throw themselves into Noises Off with gobs of antic energy. That’s both its strength and its weakness.

Pluses first. The group (especially Ben Dibble and Daniel Frederick) execute the trickiest physical set-pieces like Olympic gold-medalists. The accents aren’t completely consistent, but often good and sometimes excellent (best here are Lauren Sowa and John P. Connolly). Some of the time, the actors (in particular, Leonard C. Haas) really nail their English theatrical archetypes.  Others capture the necessary dryness (Greg Wood) or broadness (Mary Martello, a riot in the final scene). Everybody seems to be having a rollicking good time.

But a farce as frantic as Noises Off paradoxically also calls for precision and restraint. Here, too much is blurry. It’s difficult, particularly, in the first act to distinguish between what goes wrong within the context of Nothing On, and what’s happening in the behind-the-scenes world of Noises Off. (You see? It’s even hard to explain!) The bits of the sex farce we see are too cranked up and vulgar. In general, a subtler delivery would sharpen the humor. I also think Noises Off goes on too long—but that’s Frayn’s problem, not the Walnut Street’s.

Still, of this I’m sure—Audiences love Noises Off. I’ll bet you will, too.