REVIEW: In Really at Theatre Exile, a Fugue State without a Fugue 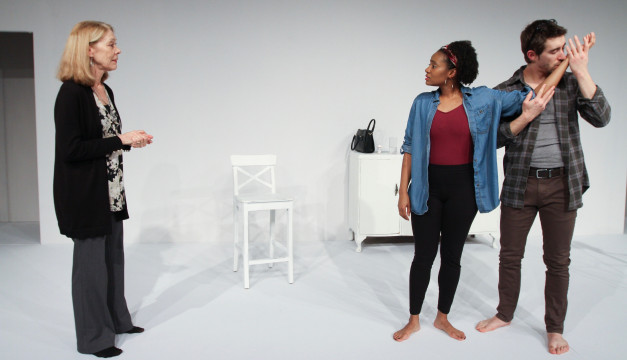 15 minutes into Jackie Sibblies Drury’s opaque play Really—as seen in an even more obfuscatory production at Theatre Exile—I was reaching for a metaphor. Was it “rearranging the deck chairs on the Titanic”? No, that’s not quite right, because while it captures the sense of drifting pointlessness, the Titanic situation was truly dire. Really is merely dreary.

Three characters here are seen in a white (as in “blank space or canvas”) room. Mother (played by Nancy Boykin), is chatty and friendly, as she sits for a photographer, called Girlfriend (actress Jessica Johnson), who initially is largely silent, focused instead on setting up the shoot. Soon, Calvin (Matteo Scammell) wanders in. That there’s a relationship—and tensions—among the three is clear. Exactly what they are is not… nor will it be 70 very long minutes later, when the lights finally go down.

Still, within the loops of nebulous, open-ended conversation, a few topics are manifest. One is the nature of art (Drury is nothing if not ambitious). Another is a recurring litany of general global awfulness, now and throughout history, including wars and mass incarcerations. Against these big but vague themes, there’s also a sort of banal melodrama, involving a fretting mother, a son who wants to please her, and the younger woman who is perceived by the mother as an interloper.

Along the way, Drury gets in some memorably poetic language, and in the last three minutes there’s a glimmer of what Really could be, in terms of insight into the inner turmoil of an artist, questioning whether she has what it takes.

But for the most part, the plot elements remain disconnected and inert. If director Brenna Geffers understands Really, you wouldn’t know it. In fact, she seems determined to avoid clarity at all costs, instead helming a production that descends further into abstraction. This involves long, empty pauses; stylized movement; emotionally freighted line readings that seem appliqued at random; and several other unwelcome tricks.  Some very obvious questions—such as what the camera reveals to both subject and photographer—remain not only unanswered, but more or less unasked.

Under the circumstances, I admire Boykin’s attempts to find a dramatic context in her long near-monologues, though a key comment along the way—about how at a certain point in life, a woman “transforms herself into a pharmacy”—suggests a level of pain and desperation that doesn’t come through. Johnson and Scammell, both likeable actors, make little impression here.

Really feels like a pretentious, sprawling journey to nowhere—a fugue state without a fugue.