REVIEW: In Sensitive Guys at InterAct, Satire with a Heavy Hand

MJ Kaufman’s play is big on dogma and short on insight. 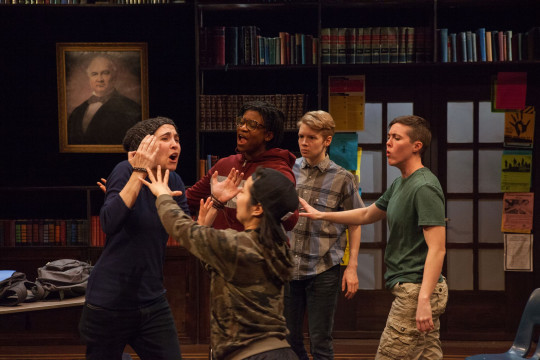 The Cast of Sensitive Guys at InterAct Theatre. (Photo by Kathryn Raines / Plate 3)

The deliberately open-ended title, Sensitive Guys, doesn’t tell you much. But two comments about MJ Kaufman’s play, now at InterAct, reveal more about this well-produced but often irritating show’s intent and limitations. The opening night pre-curtain speech applied the slogan, “a comedy about rape culture;” while a flyer calls it “a social satire about ‘working on your shit.’” A “comedy about rape” sounds like a deliberate attempt to be provocative, a significant flaw here. The script is not really funny. As for being satire—doesn’t that imply there’s actually a point?

Sensitive Guys is set in the wood-paneled library of fictional Watson College. Everything about it, including the portrait of its founder, a dead ringer for Martin Van Buren, reinforces the sense of elite privilege. Books play no role here, though. Instead, the room is pressed into service for student meetings that alternate between a safe space for female survivors of sexual assault, and a male sensitivity group.

That’s all of a piece with Kaufman’s play, which could scarcely be more reductive. Nor is there a clear point of view. Ostensibly, Sensitive Guys means to expose and puncture rape culture. But what we see here could equally be a right-wing fantasy about what “really” happens at a university, where students never attend class, choosing instead to agitate and participate in self-sustaining support groups where they raise awareness to no particular end. Faculty are clueless, self-serving, or absent.

It’s frustrating, because there are important issues on the table. The audience wants to learn more and to feel engaged—that’s why they came. A few extended scenes have nuances that suggest what this play could be. Mostly, though, Kaufman fulminates, but makes no points we haven’t already heard—often. The famous academic slam, “a keen grasp of the obvious,” applies here. Sensitive Guys is big on dogma and short on insight.