REVIEW: In Copenhagen, Playwright Michael Frayn on a Fission Expedition

Sometimes the play at Lantern Theater seems like a great and important work; at other times, not so much. 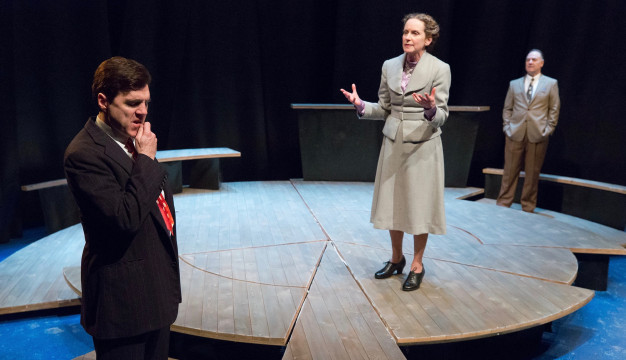 Your critic wishes you to know that he wore exactly the right thing to Copenhagen—many shades of gray. Not that Michael Frayn’s acclaimed play, mostly well done at Lantern Theater, is drab, though it is talky, long, and requires considerable focus from its audience. But it dwells in a world of ambiguity, where questions may have no concrete answers.

“Why did he come to Copenhagen?,” asks Margrethe Bohr, wife of Niels Bohr, the celebrated physicist. The “he” here is Werner Heisenberg, Bohr’s former protégé; the visit—ostensibly to reconnect with his friend—took place in 1941; and the consequences—the development and subsequent deployment of the atom bomb—could hardly have been more high-stakes. From here, the play spins into a discussion of physics, history, and the morality of scientific discoveries that have potentially cataclysmic results.

Frayn is one of theater’s great craftsmen—his Noises Off is often cited as a near-perfect farce. That mastery shows here in the seamlessly elegant construction of a play that keeps its three characters in constant, circular orbit. And though he’s better known for his comedies, there’s no lack of depth in Frayn’s work here.

In fact, the big problem is quite the opposite. In attempting to keep so many irons in the fire, including atomic science, moral philosophy, Rashomon-like questions of memory, and a complicated historical timeline, Copenhagen’s dialogue is bogged down in exposition. The litany of details—cities, dates, formulae—makes for stiff and implausible conversations, overwhelming the emotional heart of the play.

Lantern’s sleek production, directed by Kittson O’Neill, gets most of Copenhagen right, and it’s a real advantage to see the show in an intimate space. All three of the actors (Paul L. Nolan as Niels Bohr, Charles McMahon as Werner Heisenberg, Sally Mercer as Margarethe Bohr) do well, though Nolan and McMahon don’t entirely capture the complexities of their friendship/rivalry. Mercer is consistently excellent, although the role—a kind of stern mother figure who provides the voice of reason—is more an abstract cliché than a human being.

Just as Copenhagen begins with a question, at the end, I, too, find myself with a one: How great really is Michael Frayn’s play? Is it the major work it sometimes seems, full of important history and beautiful language, laced with intriguing ambiguity? Or a nearly three-hour, highfalutin fission expedition? A day later, I don’t have an answer.