Not a tree-and-presents type? We found 30 other ways to make the most of the 25th. 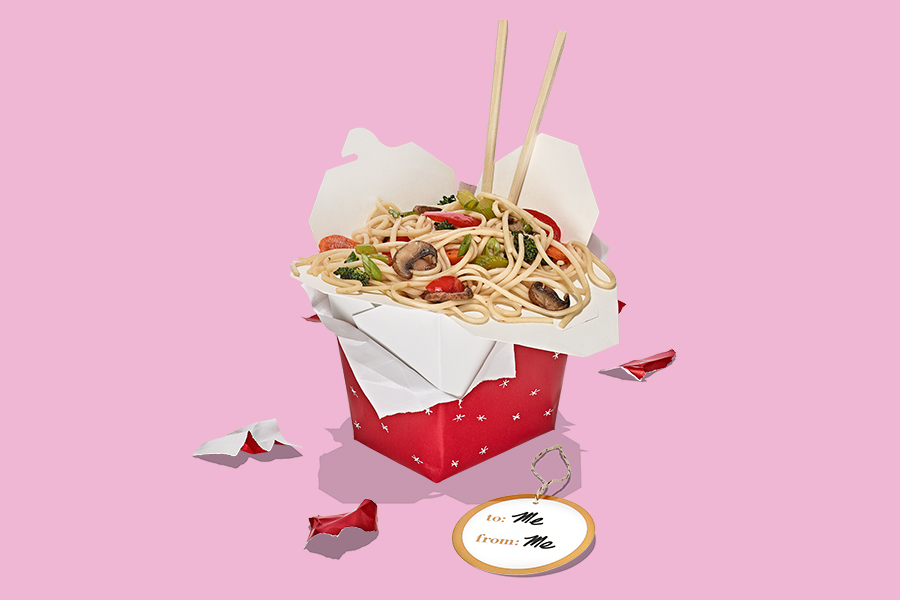 Eat at a Hotel

They pretty much never close.

1. XIX Nineteen: Historic building plus banquette seating plus fireplace equals one luxurious place to brunch. Stuff yourself silly with the buffet, which has desserts galore. Hyatt at the Bellevue, 200 South Broad Street, Center City.

3. Aqimero: The Ritz’s new-ish restaurant got off to a rocky start but has course-corrected into a respectable hotel eatery — one that’ll be serving up a special holiday prix-fixe meal with shareable sides. The Ritz-Carlton, 10 Avenue of the Arts, Center City.

4. Lacroix: The usual Sunday buffet brunch will be served on the 25th — a good thing, seeing as it’s one of the most decadent dining experiences in town. Move from the raw bar to the wagyu brisket carving station, and make sure to marvel at the gingerbread houses constructed by the pastry team on your way out. The Rittenhouse Hotel, 210 West Rittenhouse Square, Rittenhouse. 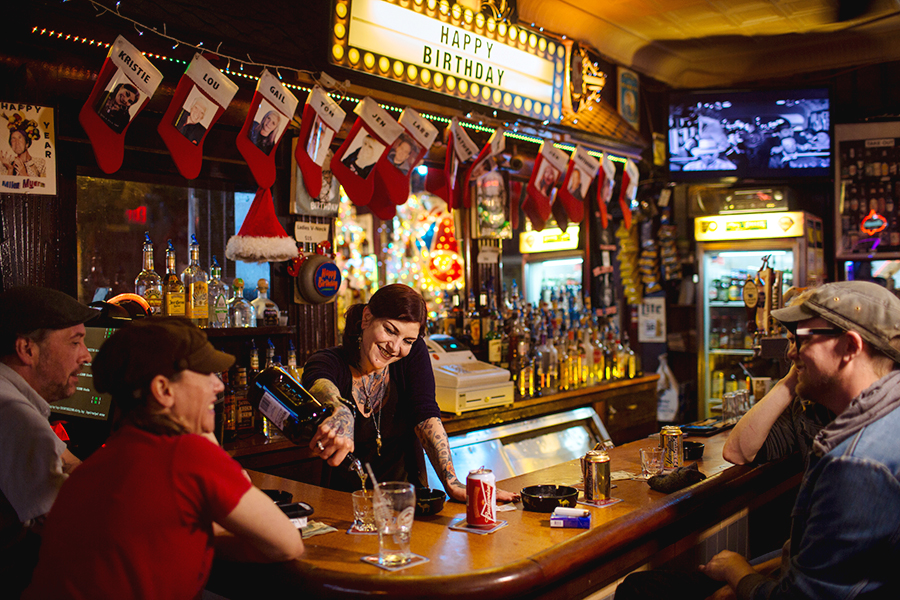 12 Steps Down
Only those 12 stairs stand between you, a pool table and dollar beers (a Christmas special) at this subterranean bar. 831 Christian Street, Bella Vista.

South Philadelphia Tap Room
Don’t let the unassuming name fool you: The beer and kitchen menus are above average. The regulars will be here on the 25th, for sure. 1509 Mifflin Street, Point Breeze.

Fishtown Tavern
A down-to-earth respite in a trendy neighborhood. The fantastic cocktails almost feel like an accident. 1301 Frankford Avenue, Fishtown.

New Wave Cafe
Never turning its back on Queen Villagers, New Wave opens up every Christmas. The kitchen will be closed, but there will be a complimentary buffet for the Eagles game. 784 South 3rd Street, Queen Village.

American Sardine Bar
SPTR’s sister bar has drafts, cans, sandwiches and sardines, and a back lawn that’ll be decked out in lights and warmed by a fire pit. 1800 Federal Street, Point Breeze.

Piano Bar at Tavern on Camac
Sing your heart out on the top floor of one of the city’s most legendary gay bars. Opens at 8 p.m. 243 South Camac Street, Midtown Village.

Ray’s Happy Birthday Bar
No better place to pour one out for J.C. on His birthday. 1200 East Passyunk Avenue, East Passyunk. 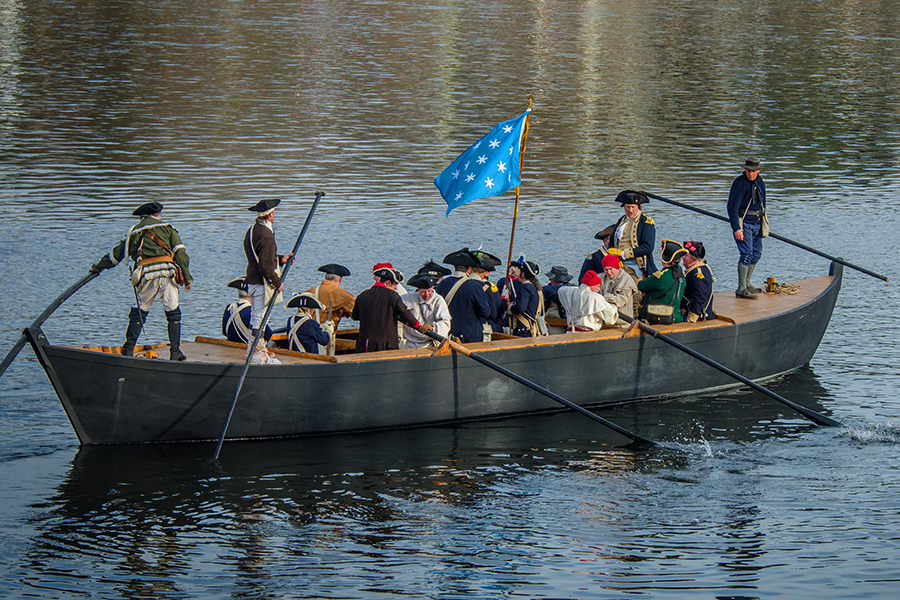 There’s actually a lot to do.

Be a local tourist. Spend as much time on the Shark Bridge as you want at AdventureAquarium (1 Riverside Drive, Camden). Take in the 360-degree city views from the 57th floor at One Liberty Observation Deck (1650 Market Street, Center City). Or head to the National Museum of American Jewish History (101 South Independence Mall East, Old City) for its annual “Being — at Christmas,” a day with crafts, music and movies.

Go skating. You can do your best Peggy Fleming plus eat and drink at both the BlueCross RiverRink at Penn’s Landing (101 South Columbus Boulevard, Old City) and the Rothman Ice Rink (1 South 15th Street, Center City), which is in the shadows of City Hall.

Get outside. Between the decked-out Conservatory and the bazillion (rough estimate) outdoor lights, you could easily spend the entire day at Longwood Gardens (100 Longwood Road, Kennett Square). Or stand on the Delaware River banks at 1 p.m. and watch as a bunch of dudes in cool costumes (some even play flutes) put on the annual Washington Crossing Reenactment (Route 532 and River Road, Washington Crossing). Better yet, sign up to be one of the actors — anyone but George, that is. He’s taken. 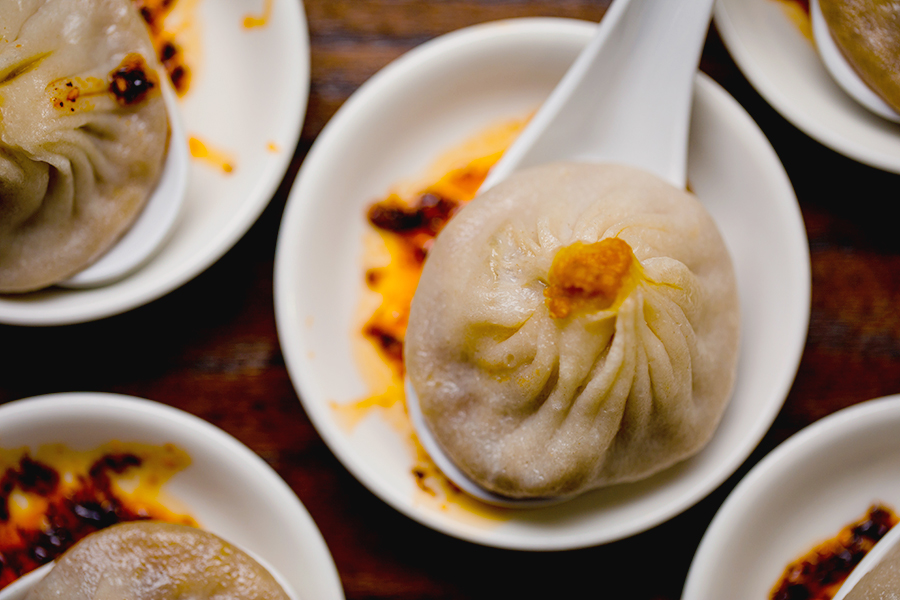 Eat Your Way Through Chinatown

From soup to cocktails, a totally cliché but totally awesome progressive dream meal.

Stop #1: Soup
Ting Wong for wonton soup » Go for the BBQ pork, in any form: in congee, over rice, with Hong Kong-style noodles, or in this soup with wontons and choy sum greens. 138 North 10th Street.

Stop #5: Dessert
N2 Sweet Café for Eskimo Kisses » Like your high-school chemistry teacher, they’re all about liquid nitrogen high jinks here. Order the smoking ice cream with Eskimo Kisses (tiny flavored nitrogen balls), and queue up your phone to capture the vapor shooting out of your nose. 125 North 11th Street.

What Do You Do On Christmas?

Yehuda Sichel, executive chef at Abe Fisher
“My wife and I spend Christmas in Florida with my in-laws. We’ll head to the beach, see a movie, and some years I’ll cook a Hanukkah-style dinner. I’ll fry latkes and cook Swedish meatballs and both savory and sweet noodle kugel. If it’s not Hanukkah dinner, we go out for Chinese food.”

Ange Branca, co-owner of Saté Kampar
“We roast turkey, because the British taught us that, but accompanied by dishes of rendang, mee hoon, rice and chicken curry. Though a majority of my family and friends are not Christians, we all ‘celebrate Christmas’ because why not? It’s a reason for a get-together with great food, just like Chinese New Year, Aidilfitri and Diwali.”

Inga Saffron, architecture critic, the Inquirer
“I don’t celebrate Christmas, so I’ve always volunteered to work a news shift at the Inquirer/Philly.com — part of an ‘all the news by Jews’ tradition. I usually make it out in time to attend Christmas dinner with friends and their boisterous extended family.”

Stu Bykofsky, columnist, Daily News
“While I’m not a Christian, I do ‘celebrate’ Christmas as an ‘American’ holiday. It’s not just for Christians anymore. For long periods of my life I have been romantically involved with Christians, so I would join them as they gathered with family. When unattached, I might hit the bars on Christmas Eve — I only did Chinatown once, and that was out of curiosity. The movies were usually empty Christmas Eve but packed on Christmas Day.”