REVIEW: By the Bog of Cats—Medea, We Hardly Know Ye 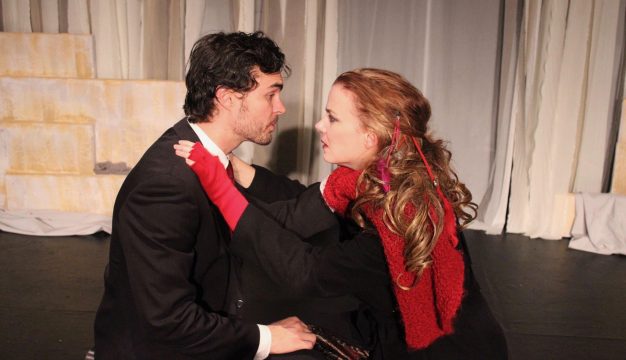 Arlen Hancock and Kirsten Quinn in By the Bog of Cats at Irish Heritage Theatre.

When first we see Hester Swayne, played by the wonderful Kirsten Quinn in Irish Heritage Theatre’s By the Bog of Cats, she’s entwined with a black swan. You may recall this didn’t work out too well for Natalie Portman, and it won’t for Hester, either. Oops, I a spoiler! I guess it’s OK, though, since director Peggy Mecham’s note forthrightly explains that Marina Carr’s intriguing but all-over-the-place play is a reimagining of Medea.

Sure enough, over the next two hours, we see the parallels—Hester has been rejected by her lover (the Jason character, here called “Carthage,” as in the fall of), who is about to marry a new bride… and likely will claim take custody of their daughter. We see also Hester’s alienation within the community—the townsfolk speak of her dismissively as a caravan-dwelling “tinker,” slang for a gypsy—and the growing desperation that will inevitably lead to disaster. Why, yes—it is Medea… sort of.

Except that Bog of Cats is set in Ireland, and much of the play is a genre comedy, drawing dry humor from the odd village types and their strange ways. One minute, there’s a charmingly off-kilter card game between a little girl and her grandmother; later, we’re plunged into a world of dark witchcraft and grand, eerie symbolism.

Carr’s writing is often flavorful and evocative. A large-scale wedding scene, full of witty but also unnerving conversation, is a particular highlight, and more generally I admire what she’s trying to do. But the tonal mix in Bog of Cats is so vast and sudden—including an overlong penultimate scene, which dips into melodrama—that the play sometimes seems to be suffering from Multiple Personality Disorder.

It would be a challenge for any company, but a particular problem here is the small space and limited scenic resources. The poetic flights and big themes of Bog of Cats need space and a sense of shadowy abstraction in the production. Director Peggy Mecham does best in the homey moments (that card game, for example)—but the more mythic sections here are too brightly lit and in-our-faces, robbing them of the necessary scale. The Walnut Studio is literally and metaphorically too small.

The strongest element here is the acting. I’ve consistently admired Irish Heritage Theatre—probably the closest thing we have in Philly to a real repertory company—for taking on difficult material, which they dispatch boldly and with nuance. That’s certainly true here. Sometimes, the accents are difficult to decipher, but the ensemble does very well. And how great to see fine roles for mature women, which here are done with exceptional skill. Tina Brock, Mary Pat Walsh, and Susan Giddings particularly shine—we should be seeing much more of these fine actresses!

And, of course, there’s Kirsten Quinn herself. She is, as always, detailed, truthful, and charismatic. She has marvelous moments, though in the end I’m not sure she makes Hester, with all her twists-and-turns, fully convincing (I don’t know if anyone could). But Quinn makes her deeply sympathetic, which is saying something!

By the Bog of Cats plays through November 18. For more information, visit the Irish Heritage Theatre website.