Axl and friends brought their massively successful tour to Philly on Sunday. 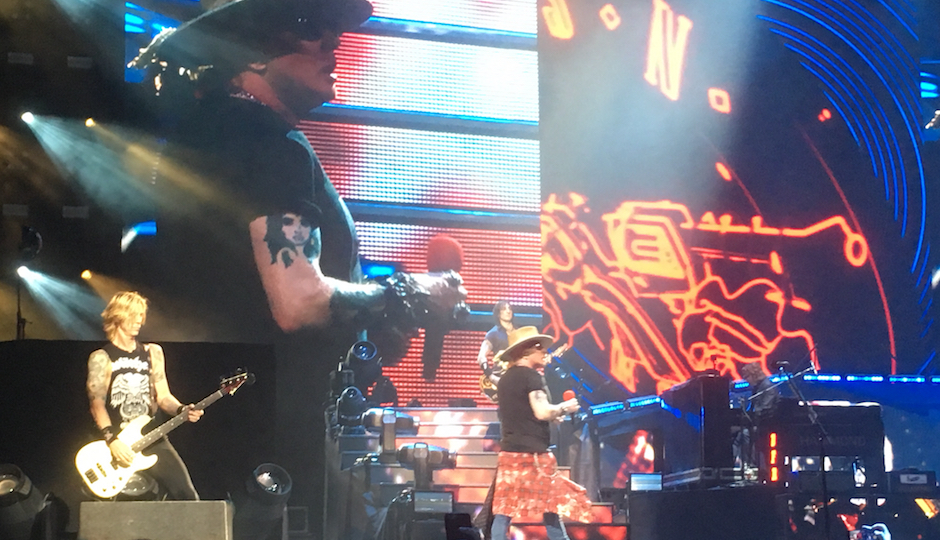 On Sunday night, Guns N’ Roses came to the Wells Fargo Center in Philadelphia, kicking off the eighth leg of their Not In This Lifetime Tour, the name of the tour a reference to the unlikeliness of the formerly (?) feuding bandmates ever playing music together again. We headed down to South Philly to check it out. Here, eight quick takeaways.

Who’s Laughing Now?
When Guns N’ Roses announced that they were reuniting for this tour, people laughed, scoffed, and rolled their eyes. But scores of shows into the tour, it is Guns N’ Roses who is doing the laughing… all the way to the bank. The tour is the highest grossing tour worldwide for the last year and it’s among the top five highest-grossing tours of any band or performer in all of history. Yes, you read that right.

Thanks, Susan Holmes-McKagan
I wasn’t originally planning on going to the Wells Fargo Center show on Sunday night. But then I got a bizarre invite from supermodel and Playboy poser Susan Holmes-McKagan, the wife of Guns N’ Roses bass player Duff McKagan. The invite itself wasn’t bizarre. Just more: Why is the world is the wife of Duff McKagan inviting me to the show?

Anyway, I called a sitter (thanks, Mom), and my wife and I and two friends headed to the concert. We arrived to find out that we had front row seats and access to a private lounge area that contained lots and lots of Cheetos and a fridge full of beer and vodka. But try as we might, we couldn’t seem to find our curvaceous benefactor. Thanks, Susan, wherever you were. 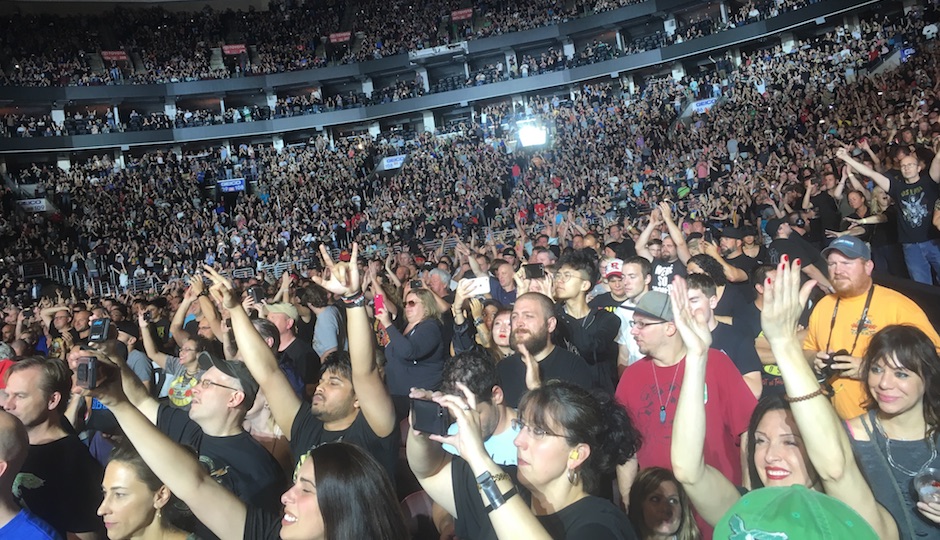 They’ve been punctual for most of the shows on this tour, and it wasn’t long after the announced showtime of 7:30 p.m. that they actually took the stage on Sunday. If I were a betting man, I’d lay down some pretty decent money that there’s a clause in their contract that penalizes them for any egregious acts of tardiness. 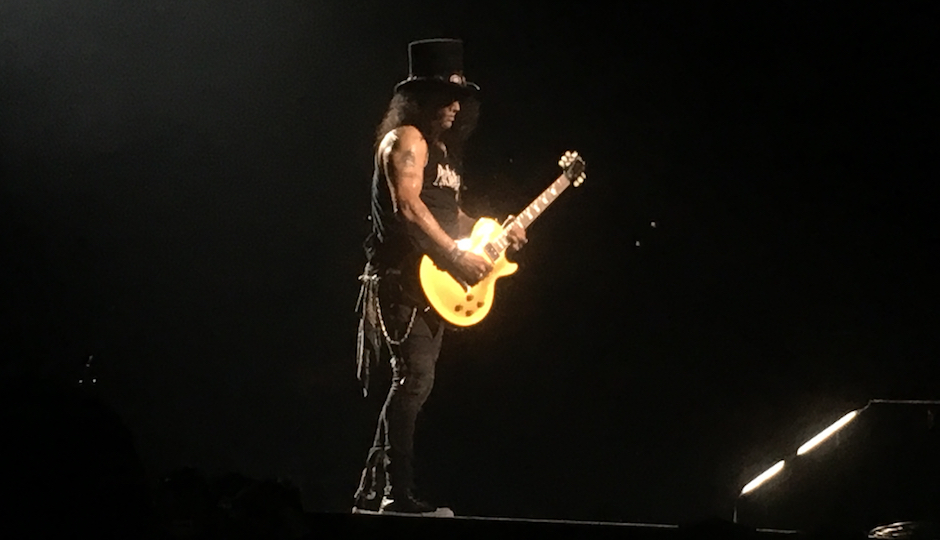 Why Can’t Live Sound Be Better?
One consistent complaint I’ve heard about last night’s Guns N’ Roses show is that the sound sucked, whether you were fourth row center or up in the 200 Level. This is almost always the case at a big show like this, so much so that we just kind of assume and accept the fact that the sound is going to be bad. But if you saw Roger Waters do “The Wall” at Citizens Bank Park or his recent shows at Wells Fargo Center, you know that it’s possible to have great sound no matter where you sit. Why can’t all shows be like this, especially when people are forking over hundreds of dollars for a night out? 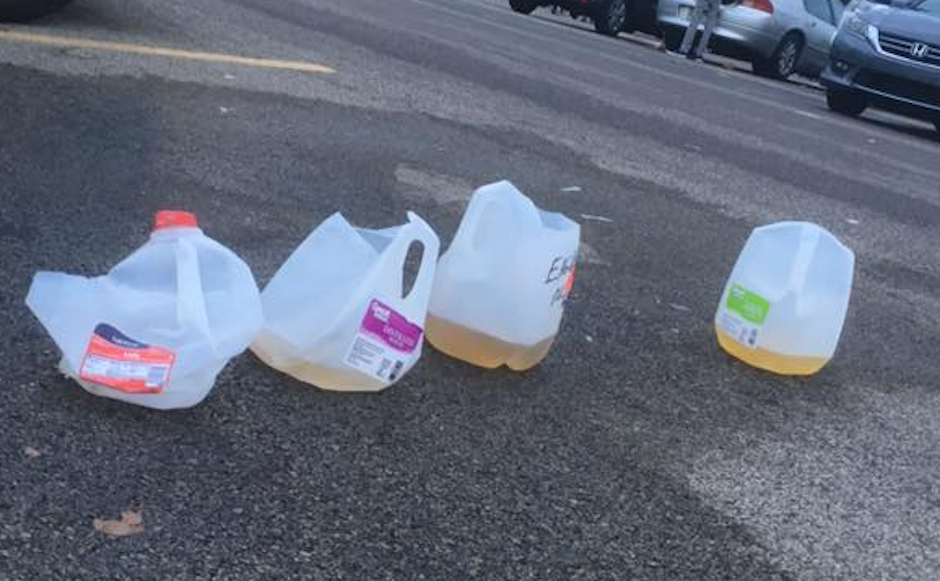 Yes, that is urine. The parking lots around Wells Fargo Center were particularly gruesome when we arrived at the show on Sunday. Don’t blame it all on Guns N’ Roses fans, though: The Eagles played at the Linc earlier that day.

They Played Lots of Covers
I kind of lost track, but I think Guns N’ Roses played like ten covers on Sunday, including Pink Floyd’s “Wish You Were Here” and Soundgarden’s “Black Hole Sun,” in addition to their more well known covers “Live and Let Die” and “Knockin’ On Heaven’s Door.” But “Wichita Lineman”? Odd choice. 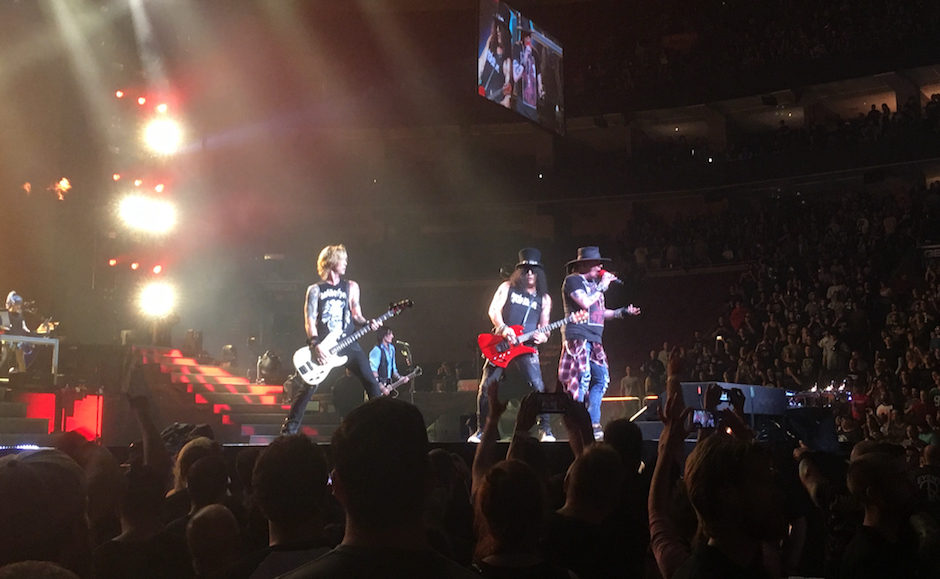 You Should Definitely Go See the Tour
If you’re any kind of Guns N’ Roses fan and you haven’t seen this tour yet, it may be your last chance to ever see this iconic repertoire of music performed live by the people who created it. They’re playing Madison Square Garden on October 11th and 15th, Newark’s Prudential Center on October 12th, and the Capital One Arena in Washington D.C. on October 19th. Get there if you can.