In The Swallowing Dark at Inis Nua, Action is Subjugated to Storytelling 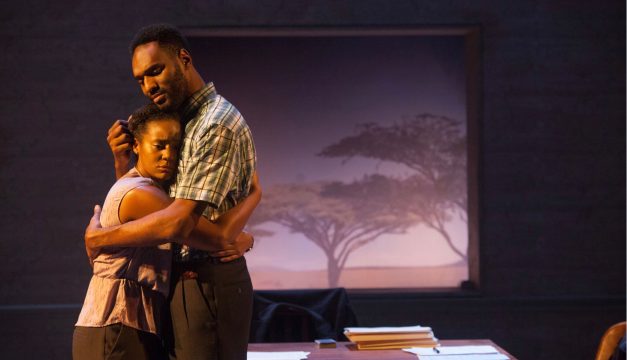 There’s a lighter, cigarettes, and even a small on-stage fire in The Swallowing Dark at Inis Nua. Yet I’m afraid the metaphor that kept coming back to me as I watched Lizzie Nunnery’s earnest but inert play is a watched pot. The ingredients seem to be good, and now and then there was a promising whiff. But ultimately, the whole thing doesn’t get above room temperature.

It’s frustrating because the elements suggest the audience should be experiencing a growing sense of nail-biting unease. In a grim Liverpool interview room, Canaan (played by Walter DeShields) meets Martha (Jessica M. Johnson). He is a refugee who fled Zimbabwe and its brutal, Robert Mugabe-led regime. But Canaan’s asylum status has lapsed, and now his secure life in England—along with that of his young son—is imperiled. Martha is his newly-assigned “case owner,” a job that seems part investigator, part advocate, part social worker. It’s not an optimal fit, and the relationship between her and Canaan is wary on both sides.

As Nunnery’s play goes on, background details are filled in through the sharing of memories that both clarify and complicate. Neither Canaan’s backstory nor Martha’s is straightforward. The Swallowing Dark is part bureaucratic nightmare (shades of Menotti’s The Consul); more than that, though, I think (like Martin McDonagh’s The Pillowman) it means to keep us wondering about the nightmarish history that led Canaan and Martha to this place.

But while the writing is rich in images, forward momentum takes a back seat to storytelling. There may be a way to make it compelling, but director Claire Moyer’s slow tempo, and the lengthy blackouts between scenes further blunt any sense of energy. DeShields and Johnson create plausible characters, but there’s little variety, and the stakes never seem high enough. (It doesn’t help that both use accents that aren’t always easy to understand in this open space, especially at low volume.)