This witty collage of theatrical ideas, superbly designed and performed, sets a high standard for O17. 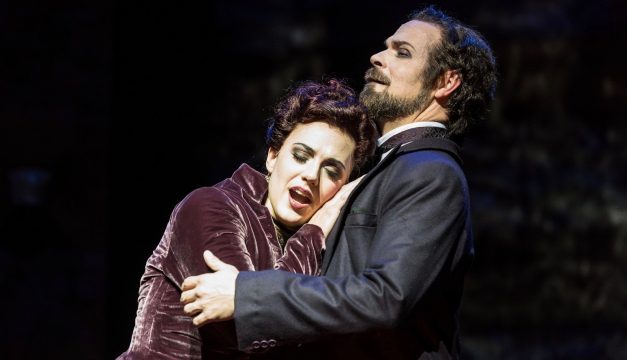 Daniela Mack and Troy Cook in Elizabeth Cree at the O Festival. (Photo by Steve Pisano)

And so it begins—with an ominous tolling bell, and a death sentence. Well, it’s an opera, after all. But any sense that Elizabeth Cree will be predictable vanishes almost instantly. This world premiere by composer Kevin Puts and librettist Mark Campbell, based on a novel by Peter Ackroyd, moves across an astonishingly varied dramatic terrain. There’s a little Jack the Ripper, a dash of All About Eve, a touch of Lizzie Borden… and all of this framed by Victorian music hall merriment. Did I mention that there’s also discussion of the Golem of Hebrew legend? Oh, and Karl Marx shows up for a while.

To Puts and Campbell’s great credit, they have made of this a concentrated, theatrically pointed and witty, musically rich, and even cohesive work. OK, there are a lot of plot threads (and I’m leaving out the spoilers). I’ll need to see the work again, but my first reaction is a few storylines vanish without real resolution, and some of the Big Themes aren’t fully realized.

But the moment-to-moment work here is often marvelous, and brilliantly staged and designed. (Credit here to director David Schweizer, sets and costumes by David Sinn, and lighting and projections by Alexander V. Nichols.)  Simply as a piece of stagecraft, Elizabeth Cree demands to be seen—and there’s much more. 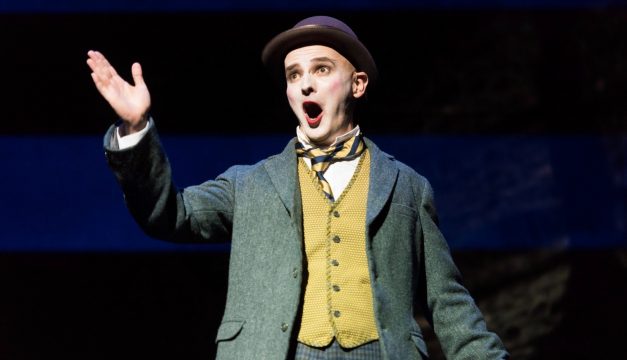 Joseph Gaines in Elizabeth Cree at the O Festival. (Photo by Steve Pisano)

Superb performances, for one. Daniela Mack brings brunette glamour and a cool but smoldering temperament to the title role (she looks astonishingly like Mary Louise Parker), and her burnished mezzo easily rises to the challenges, including some jagged “modern” vocal writing as well as considerable coloratura. Troy Cook’s lush baritone and haunting presence are similarly effective. Terrific as they are, the scene-stealer here is Joseph Gaines, playing one of the music hall stars—he dances, acts, and sings (with a hauntingly heady tenor) with almost insouciant ease, and every word is clear.  The others in the ensemble cast are excellent, and conductor Corrado Rovaris brings out wonderful textures in Puts’s richly detailed orchestration.

If this opening salvo of the O Festival is meant to cue our expectations, we should be prepared for genre-defying musical theater. Elizabeth Cree has certainly set a high standard.