The Hang: In Hot Water With Marian Hill

For the Haverford High kids behind the Apple ad earworm “Down,” a trip home means home-baked high jinks. 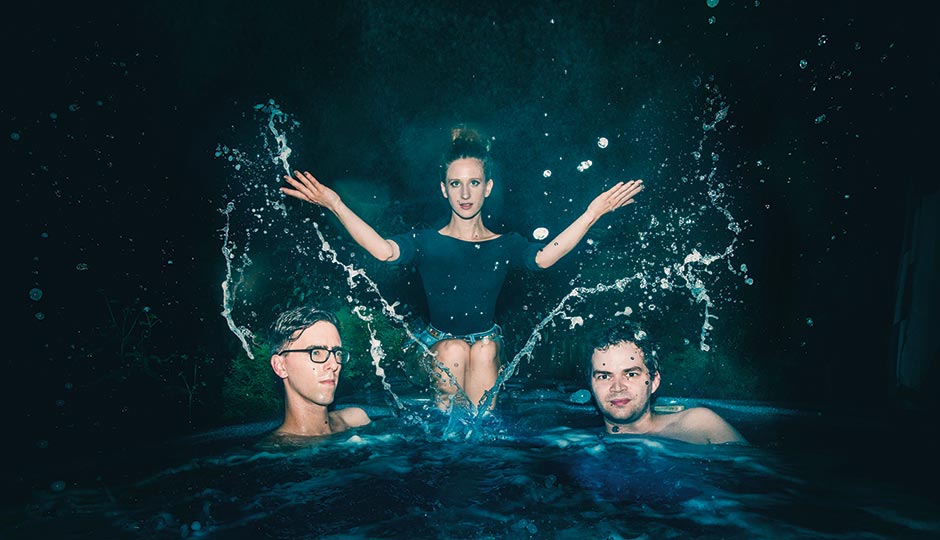 Can you gnaw on raw rhubarb? Marian Hill doesn’t know the answer offhand, but that doesn’t stop me from chomping a chunk like it’s crudité. After some quick Googling, I receive heartening news: I’m going to live. While rhubarb leaves are toxic, the fibrous stalk uncooked is a harmless, if exceedingly tart, snack choice.

A common mistake people make about Marian Hill concerns its membership. I’m here, prepping a perfectly safe pie in a Havertown kitchen, not with a single chanteuse, but with a couple of seventh-grade choir friends who flipped a post-college collaboration into a main-stage slot at Made in America this month.

Jeremy Lloyd and Samantha Gongol, both 27, are 2008 graduates of Haverford High, a 10-minute walk from Lloyd’s childhood home, which is serving as our pop-up bakery. The band name is a nod to the pair’s middle-school production of The Music Man, in which they played the leads, Marian Paroo and Harold Hill. These theater geeks create disarmingly catchy, groove-heavy R&B that bloggers clamor to characterize with various synonyms for “sexy” — Lloyd is the meticulous producer, Gongol the sizzling voice. Right now, they’re less concerned with their next single than with the proper amount of brown sugar to toss into a bowl of hulled and halved strawberries and that Ardmore Farmers Market rhubarb, which Gongol has lopped into hunks the size of Legos.

We’re making this pie from scratch at the suggestion of Lloyd, a hard-core home cook who, between studio work and rigorous touring, documents his ambitious kitchen experiments via social media. While Gongol readily admits she’s more fond of eating food than prepping it — this is her first try at pie — Lloyd will dedicate hours to perfecting Persian fesenjan or hand-forked gnocchi.

“I love making things,” says Lloyd as he rolls out his crust between two pieces of wax paper. “Making a pie and serving it to people is very similar, in my mind, to making a song and playing it for people.”

After crimping the crowning dough and sliding the pie into a 400-degree oven, Lloyd makes good on the second half of that metaphor, bringing me through a door just off the kitchen to hear a few as-yet-unreleased tracks that should start trickling out this fall. It’s in this room — in the sheet-music-stuffed home office of Lloyd’s Grammy-nominated composer/conductor father — that he and Gongol came up with “Whisky,” the first song they ever wrote together as Marian Hill.

That liquor-soaked paean to infatuation, which spread via SoundCloud, is one of their better-known songs, one of several featured on their 2013 debut EP, Sway. But no cut to date has matched the reach of “Down,” the intoxicating piano-driven anthem that Apple featured in a television spot in early 2017. Though the duo, which signed to Republic Records in 2015, was already selling out shows, the popularity of “Down,” the ubiquitous opener off their 2016 full-length Act One, boosted their profile exponentially. “The wind blew in our direction,” says Gongol, an NYU grad who originally planned on working on the business side of the industry.

Successful as they may be, they’re still kids hanging at their parents’ houses when they visit Delco. Gongol casually points out a plastic bull they picked up on a trip to Spain to play a private concert, the first time they traveled internationally to perform — a totem of a truly major accomplishment. It’s sitting, along with a potted pothos plant, on top of the crate of Mayzie, the Lloyd family’s shepherd-collie mix.

Nowadays, Marian Hill is most often credited as a New York band, and this is accurate as far as zip codes go — Lloyd lives in Bushwick, Gongol is based in Manhattan, and they record together at a Brooklyn studio. But they are still locals at heart, which they prove by twilight-touring me through the old neighborhood en route to meeting saxophonist Steve Davit, a friend and Haverford classmate who performs with them live.

“This was my trick-or-treating route,” a nostalgic Lloyd explains as we trudge down a series of eerily lamplit streets. “Look at these trees out here, man! I miss the trees.” We pass by their alma mater (“It looks less intimidating,” observes Gongol) and Lloyd’s favorite Wawa, then hug the shoulder along a sidewalk-less stretch of Darby Road, pausing occasionally to hop into the sopping grass to let cars pass. Gongol, who covers some serious ground in heels, crouches down a few times to admire the slugs that have emerged on the asphalt after many hours of steady rain.

It ends up being a not-insignificant hike to Davit’s parents’ house, giving us time to talk minimalism in beat-building (“When you can do so much, it’s exciting to be able to hear choices,” says Lloyd), Gongol’s biggest vocal influences (Norah Jones and Lauryn Hill), and the duo’s reaction when fans tell them Marian Hill is a staple of their Spotify sex playlists (more flattering than weird). After a quick dip in his family’s hot tub (the horn player, still a Philly guy, lives nearby with his wife), Davit drives us back to the Lloyd house, lured by word of fresh-baked pie.

Not allowed much time to cool, the strawberry-rhubarb filling is a little soupy, but the flavor is definitely there. Lloyd seems disappointed. “I was excited to show it off, but it’s not a particularly pretty pie,” he laments. They’ll get a shot at sweet redemption when they’re down for Made in America — that is, if they can schedule a baking sesh around sharing a bill with Jay Z, Migos and Solange.

Published as “In Hot Water With Marian Hill” in the September 2017 issue of Philadelphia magazine.