Can You Write a Story From Consecutive Dictionary Entries?

Longtime Penn writer John Shea has penned quite a few, and they're being published in his first "inspired and inspiring" book, Tales from Webster's. 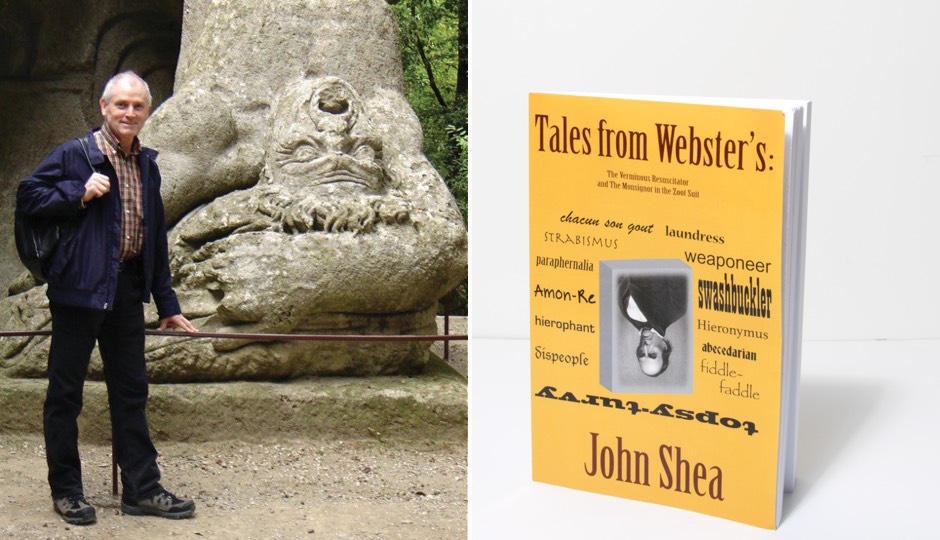 Back in 1980, John Shea was a grad student at Penn, about to tackle writing his dissertation, when he happened to look something up in the dictionary: monstrance. He wasn’t sure how to spell the word that meant a vessel that holds the consecrated Host at Catholic Mass, so he searched for it in his wife’s 1970 edition of Webster’s New World Dictionary. Just by chance, he happened to notice the four entries directly proceeding it: monsignor, monsoon, mons pubis and monster. “I just thought, right there is a tale in miniature,” says Shea, “a story of temptation and passion.” It was the start of an obsession that he hasn’t been able to shake.

Shea crafted the set of consecutive words into the tale of a Catholic prelate who, while listening to a young girl’s confession, begins to dwell on impure thoughts about her body, is overcome with shame, and, the confession finished, is overwhelmed with relief that he hasn’t acted on his imaginings. It was a quirk, a whim — except that Shea is a man of words, and when he was finished, he realized he could write the same sorts of stories using other such strings. Over the next three and a half decades, while he worked for Penn as an editor and writer, he kept an eye out for promising sequences and interesting words. And he coined a name for the literary form he’d created: “Tales from Webster’s.” That’s also the title of a collection of his stories being published this month by Livingston Press. Kirkus Reviews called the book “an inspired and inspiring collection of dictionary-prompted flash fiction” and said Shea “does a masterful job fattening these strings of unconnected words into clever shorts.”

“It improves your vocabulary,” Shea says of his hobby turned oeuvre. “Some of the words I’ve learned by doing this are ‘weasand,’ ‘smilax,’ the obscure legal term ‘usufruct.’ … ”

Several of Shea’s creations have previously been published in literary magazines, including that of Penn’s Philomathean Society — his very first one in print, in 1982 — and Ampersand Review. At one point he sent several to the editors of the New Yorker and actually heard back, he says with some pride, via postcard: “Whoever it was — it wasn’t signed — made some comments about a Serbian author who had done something similar.”

And he’s tightened his own rules. Originally, Shea allowed himself five lines of text between adjacent words; now he limits that to 50 words. As constrained as the form may seem, the results are wide-ranging in theme and tone, from a press conference by a presidential spokesperson (from inescapable to inexplicable) to the nocturnal musings of a vampire (night life to nigrescent) to the keening of a mother at the funeral of her child (homestretch to homing pigeon). Shea insists he hasn’t ever cheated by skipping over a word in sequence, but adds that he does still use that 1970 edition: “It’s in a time zone. There’s no ‘tweet,’ no language from new technology. And it has some words that may have dropped out of usage.”

Even within the genre, Shea invents new challenges. For one set of words, he crafted two different stories — one about three TV commentators doing NFL football analysis, and another using those same words to discuss war, pointing up the “satiric connection” between the two, um, sports. One of his favorites utilizes a string of 85 words, compiled into “the autobiography of the world’s favorite CEO.”

Late last year, Shea submitted a set of more than 70 of his tales to the Tartt First Fiction Award contest, run annually by the University of West Alabama’s Livingston Press. He won, and his prize is the publication of his book this month. It’s not his first award for writing. As a Penn grad student, he snagged prizes in both playwriting and poetry. His story “The Real World” was awarded an honorable mention by Writer’s Digest magazine and was subsequently published in Columbia Magazine and performed by the Interact Theater Company. And a short story he wrote, set in Colonial Philadelphia, won second prize in the Philadelphia City Paper’s fiction contest. He has also published work in publications as diverse as Partisan Review and Alfred Hitchcock’s Mystery Magazine.

Shea’s recent retirement from Penn should leave him with even more time to explore his chosen genre. He admits that so far as he knows, he’s the only writer to be working in the “Tales From Webster” format so far. But he’s not alone in having fun pushing the limits of language and imposing what he calls “aesthetic restraints” on his work. “People do crazy things,” he says, mentioning a grad student at Penn who crafts exceedingly long palindromes and a Frenchman who wrote a novel that never used the letter “e.” “The English translation never used the letter ‘e,’ either,” he notes in wonderment. Most people, I mention, find the act of writing hard enough without such metaphysical fetters. “Well, it’s not like being on a chain gang,” Shea points out. “And when they do work, you get inspired and want to do another one.”