THEATER REVIEW: In Simpatico’s Hir, the Triumph of Chaos

If this is the future of American theater, count me in! 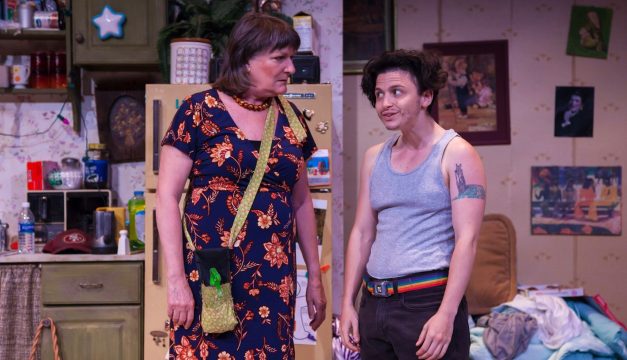 Marcia Saunders and Eppchez! in Hir at Simpatico Theatre. (Photo by Daniel Kontz)

“We’ve given up on order,” says Paige with a triumphant smile to her son, Isaac, as together they survey the chaotic mess of their living room. If we take this as a winking summary also of Taylor Mac’s spectacular, genre-busting play, Hir—well, I’d say it’s the understatement of the year.

You see, Isaac has just returned from fighting in Afghanistan—and finds he’s traded one war for another. Back at home, he discovers that his father, Arnold (actor John Morrison gives a funny and heartbreaking performance) has had a stroke, and is now infantilized and abused by Paige, who has taken his failing health as an opportunity to grab the reins. (Paige is quite a piece of work: imagine a cross between Paula Deen and Kim Jong-il, and you’ll be close.) From the look of things, house cleaning is the first thing she gave up, in what is now her on-going quest for self-realization.

This is all pretty overwhelming to Isaac, who is also grappling with his own drug addiction. But wait—there’s more! He soon learns that his sister He soon learns that his sister has been transitioning and is now called Max (played with spellbinding, puckish charm by Eppchez!, an ungendered mixed-media artist). Max’s gender-fluid identity is yet another of Paige’s new causes. (By the way, “hir” is a gender-neutral pronoun.)

If I were teaching Hir to a college theater class, I might start by asking them to imagine the prehistory of the family. I think we might get would be something similar to Long Day’s Journey into Night—a family in the shadow of a narcissistic, miserly patriarch, whose dominating presence robs the rest of them of a life. In this light, Paige’s emasculating treatment of Arnold takes on an almost epochal resonance—an upending of patriarchal privilege.

So, while it would be easy (also accurate) to describe Hir as a transgender play, it’s so much more than that—it’s about war, family, waste, imprisonment, and escape. Surely, by now you’re also wondering if Hir is a comedy or a tragedy—the answer is yes, on both counts.

In fact, the twists-and-turns of Mac’s script are perhaps its most startling quality (and that’s saying something!). Nothing is sacred here—war, the military machine, drug addiction, safe spaces, and even gender politics are skewered with equal savagery. It’s also often laugh-out-loud funny.

All of this makes Hir quite a challenge to perform—here director Jarrod Markman negotiates it with assurance and high-style. As Paige, the great Marcia Saunders is beyond praise. It’s an acting class simply to watch her navigate the shifts in tone with a surgeon’s precision. She can start a line with the sunny boisterousness of a morning show co-host—and, by the end of it, turned chillingly authoritarian. Simply amazing. Kevin Meehan (Isaac) is very touching in his quieter moments, but I wish he’d tone down some of his smirky comic delivery.

To say that Hir isn’t for everyone would be another understatement—but I urge all who are open to new experiences to check out for themselves the exceptional work that Simpatico is doing. O brave new world, that has such people in it! If Hir is the future of American theater, count me in.