THEATER REVIEW: In The Arsonists, Family Life from Fire to Embers

Jacqueline Goldfinger’s spellbinding new play honors centuries of theater in a voice that is distinctly her own. 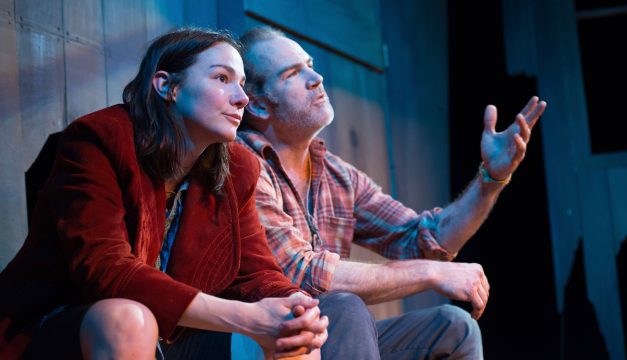 Sarah Gliko and Steven Rishard in The Arsonists at Azuka Theatre. (Photo by Johanna Austin)

Now that’s what I can an entrance! Actress Sarah Gliko (playing a character called “M”), bursts through the door, disposes of a body in a bag, nearly destroys a ramshackle cabin in the Florida swamps, and says about a dozen words (well, mostly she says, “Fuck!”). And that’s just the first minute or so.

This high-voltage start to Jacqueline Goldfinger’s spellbinding new play, The Arsonists, put me in mind of a kind of gender-reversed Sam Shepard—especially Shepard’s early collaborative work with Patti Smith. (The Arsonists also incorporates mournful songs and hymns, delivered with piercing authenticity by Gliko and Steven Rishard, playing “H.”)  As in Shepard, there is a sense that love, loss, and betrayal are inseparable.

But the Shepard analogy turns out be only part of the puzzle. H and M aren’t lovers—they are father and daughter. Another influence here goes back to the Greeks, and it’s the story of Electra, pining for her father, Agamemnon. As with Electra specifically—but also mythology more generally—family legacies are inescapable, a fire out of control; Goldfinger’s title is both literal and metaphoric. (This also recalls Shepard—the “nitroglycerin in the blood” that virtually annihilates the nuclear family in Curse of the Starving Class).

What makes The Arsonists so extraordinary is in part its contradictory oddness. It’s realistic and gritty, but also beautifully poetic; epic in scale, but it runs only 70 minutes. There’s very little plot, but every line tells a story. By the time we reach the finale, the tone has shifted considerably. There is a sense here that the playwright honors a history of theater (the Greeks, Shepard, also Eugene O’Neill’s Mourning Becomes Electra), but it’s also contemporary. Best of all, Goldfinger’s voice is distinctly, wonderfully her own. 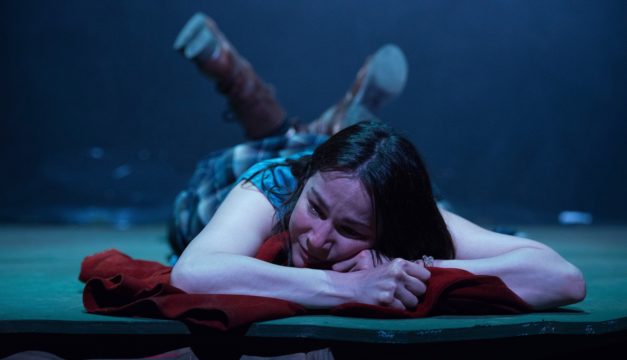 Sarah Gliko in The Arsonists at Azuka Theatre. (Photo by Johanna Austin)

Entering the theater, there was already a sense of buzz. Days before, Goldfinger had won the prestigious Yale Drama Series prize; and Azuka’s previous show, the premiere of Douglas Williams’ Shitheads, was a runaway hit. Expectations were high—and fully realized.

The Arsonists production at Azuka is part of the New Play Network Rolling World Premiere initiative. The play goes on to new productions in Alaska and California (and, I have no doubt, a long life beyond that). This production certainly sets a high bar—really, I can’t imagine it better done. Gliko and Rishard are riveting, and the design (scenery by Dirk Durossette, lighting by Dominic Chacon, sound and music by Andrew Nelson, costumes by Becca Austin) is a knockout. Allison Heishman’s direction is pitch-perfect.

The Arsonists is a baptism by fire—and a brilliant way to close the season.

The Arsonists runs through May 21 at the Louis Bluver Theatre at the Drake. For more information, visit the Azuka website.