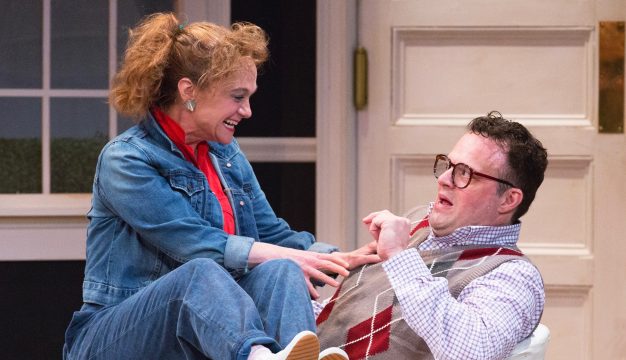 A few years ago, actress and lifestyle authority Gwyneth Paltrow earnestly discussed marital problems, introducing much of the world to the eyebrow-raising term, “conscious uncoupling.”

Personally, I much prefer the decidedly less earnest—and far more enjoyable—version of conscious uncoupling that’s presented in Marc Camoletti’s Happy Birthday, wherein five characters—two men, three women—arrange and rearrange themselves in any number of romantic, sometimes improbable, combinations. Since it’s a classically-structured French farce (here adapted by an English writer, and performed with panache by an American company), all this involves mistaken identities, logistical confusions, awkward smooching, and doors, doors, and more doors. In other words, hilarity ensues.

Camoletti’s play, a huge hit in London in the ‘70s, has acquired the patina of a period piece, something of a send-up on the silliness of middle-aged swingers. I’d say that only adds to the fun, especially when it looks as smashing as here, played on Lance Kniskern’s luxe living room set, which somehow manages to be both chicly elegant, and a louche bachelor pad. 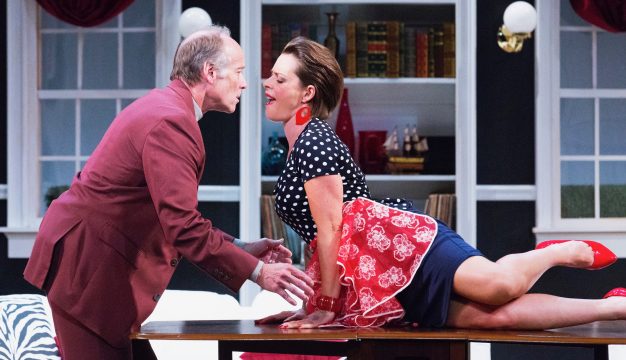 But the virtuosity of a farce really is in the performing. Director Trey Lyford has a masterful sense of staging and energizes the hell out of Happy Birthday; mostly, this pays off, though by starting at such a high, it doesn’t have much room to expand. A cast of fine Philadelphia actors—Scott Greer, Susan Riley Stevens, Jennifer Childs, Greg Wood, Suli Holum—all score their requisite points, and deliver their business with aplomb. Childs and Greer are particularly winning—more than 25 years since Philly first fell in love with them, their comic skills (individual and as a team) have only grown with time, and they give ample evidence here of their status as Philadelphia living treasures. (Fun fact: the five actors and the director are all married; I’ll leave it to you to sort out the combinations.)

I should ‘fess up about my own critical bias—I admire farce but don’t love it, and here I was, perhaps predictably, more impressed by the high level of accomplishment than actually amused. But clearly, the audience was loving it. There’s not much below the surface in Happy Birthday—but when that surface is as bright and shiny as here, I doubt anyone will mind.

Happy Birthday runs through May 21 at Plays & Players Theatre. For more information, visit the 1812 Productions website.