THEATER REVIEW: Cabaret is Back Again… and Edgier than Ever

One of the supreme classics of musical theater seen here in a brilliantly theatrical staging. 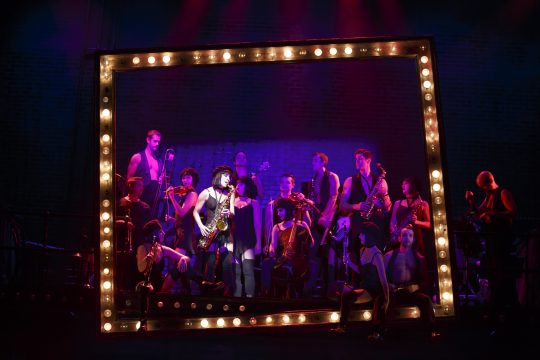 Kander and Ebb’s musical Cabaret is now 50 years old. It’s never been out of the spotlight, but at times of political uncertainty, the show takes on special resonance. We’re deep in one of those times now—though in fact, the presidential election has nothing to do with this tour, which derives from a 2014 Broadway revival that was itself a revival of a landmark production by co-directors Sam Mendes and Rob Marshall.

Part of Cabaret’s staying power is its theatrical permutability, a rare quality in a musical. Each new Hello, Dolly! looks pretty much like the last one—but every generation reinvents Cabaret along strikingly new lines. Harold Prince’s original defined the show as radical in 1966; six years later, Bob Fosse rebuilt it for his hit movie adaptation.

Mendes and Marshall infuse their stage version with some of Fosse’s in-your-face sexuality, but they take it even further. This Cabaret is louche, edgy, pansexual. As seen at the Academy, seventeen years after this production’s premiere, it has only grown more extreme. (Cabaret was never exactly family-friendly, but this time, it’s most emphatically not for kids.) 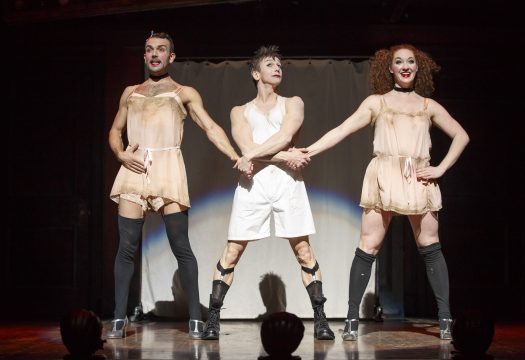 I mean that in a positive sense. Mendes-Marshall’s Cabaret is a brilliant piece of theater, and it looks as good as ever here—in fact, I’ve seen the staging three times over the years (once on Broadway, twice on tour), and what I saw at the Academy last night strikes me as perhaps the most vividly acted of all. Sometimes, tours look tired or skimpy, but not this one—everything is in tip-top shape, from the onstage full orchestra, to Leigh Ann Larkin’s driven, hard-as-nails Sally Bowles.

My reservations have more to do with the concept. I’m sure Mendes and Marshall thought this grittier Cabaret would add immediacy and resonance to the central theme of political culpability. But to me, it paradoxically makes it easier to dismiss. Seen here, the decision to join the Nazis looks like the last gasp of desperate outsiders; whereas the respectability of Harold Prince’s original—steeped in a kind of shabby but genteel middle-class-ness—was ultimately far more jolting… and more accurate.

Still, in any form, Cabaret remains one of the supreme classic pieces of musical theater; more than that, it’s ever-modern, and the punchy stagecraft seen here makes that point dazzlingly.

Cabaret plays at the Academy of Music through April 9. For more information, visit the Kimmel Center website.