The best of this viscerally thrilling but interpretively odd take on Shakespeare’s play is very fine indeed. 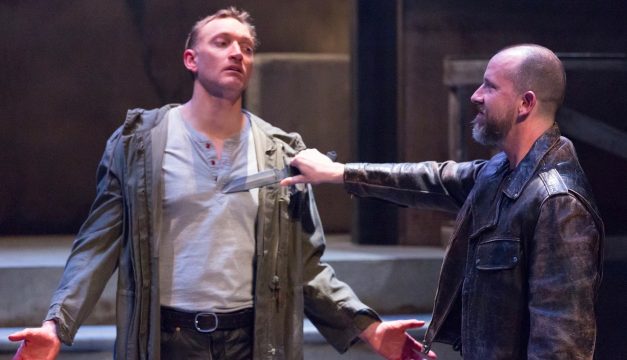 It begins thrillingly. At Lantern Theater, the skirmishes of ancient Rome in Coriolanus have a high-stakes muscularity that instantly grabs the audience, and doesn’t let go. Every inch of the playing area (including some of the house) is pressed into service in Charles McMahon’s production, and the updated visual world cleverly suggests Road Warrior—with all the visceral impact that implies.  For the first 20 minutes or so, I kept thinking of the lucky students who will be introduced to Shakespeare through this staging, so imbued with the sense of living excitement that a great 400-year-old-play can still muster.

There’s more to Coriolanus than that, of course; it is also a plot-heavy piece with lots of twists-and-turns. As the play turns talkier, the show still retains many of the virtues we’ve come to expect of McMahon’s often-lauded Shakespeare series—clarity in the narrative, imaginative choreography, the pluses of seeing a work like this in an intimate space, and a hard-working ensemble who play multiple roles with commitment and skill. (Among the strongest here are actors Kirk Wendell Brown, Adam Hammet, and especially Charlie DelMarcelle, the latter a veteran of some of Lantern’s best productions.)

This Coriolanus is also (to me, at least) an odd interpretive take on a drama that admittedly is famously ambiguous. Contemporary productions often see Coriolanus (the character and the play) as a metaphor for fascism—he is a new-minted war hero, whose subsequent political career fails spectacularly due to a combination of factors including hunger for power, arrogance, and turning a deaf ear to the vox populi.

Our current political climate might seem to invite this reading—but if you’re expecting this Coriolanus to be a scathing metaphor for Donald Trump, you may be surprised.  As seen here, in an appealing performance by Robert Lyons, Coriolanus himself is uncommonly sympathetic—less a tyrant than a heroic-but-fragile human being, damaged by war as well as the subsequent demands of peacetime. Compounding this is an ensemble portrayal of the populace as the motliest of crews—a strange, disparate group who share little but general disgruntlement. (Some of them  could step in as the mechanicals in Midsummer Night’s Dream.)  The final takeaway here is less about the failure of leadership than the impossible demands of life in the public eye. 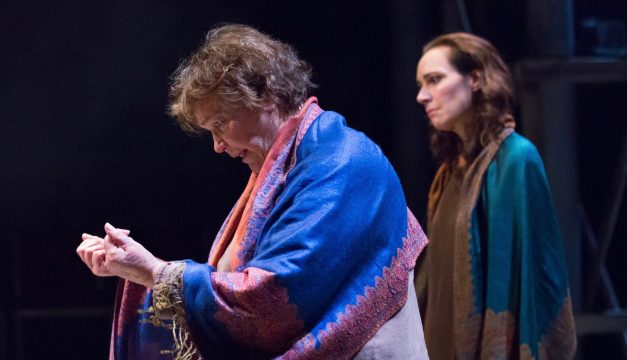 Another highly distinctive factor here—and a very positive one—is the presence of Tina Packer as Volumnia, Coriolanus’ shall-we-say complicated mother. Packer is the founding artistic director of Shakespeare & Company, and a living legend among teaching artists; also a British-trained actor and former associate of the Royal Shakespeare Company. Packer is a near-contemporary of Glenda Jackson, Judi Dench, and Eileen Atkins, and her acting style has a similar sense of scale and grandeur.  Unsurprisingly, her vocal variety and ability to parse the verse is in a league apart from her colleagues—but what’s equally impressive is how fully she is a member of the Lantern ensemble.

Packer’s presence is a lovely confirmation of something local audiences can feel proud of—the best of Lantern’s Shakespeare is very fine indeed, and the company has helped bring the Philadelphia theater scene to national prominence.