Author Q&A: Judy Collins on How She Conquered Her Food Addiction

The legendary singer discusses her new book, Cravings, at the Free Library on Wednesday. 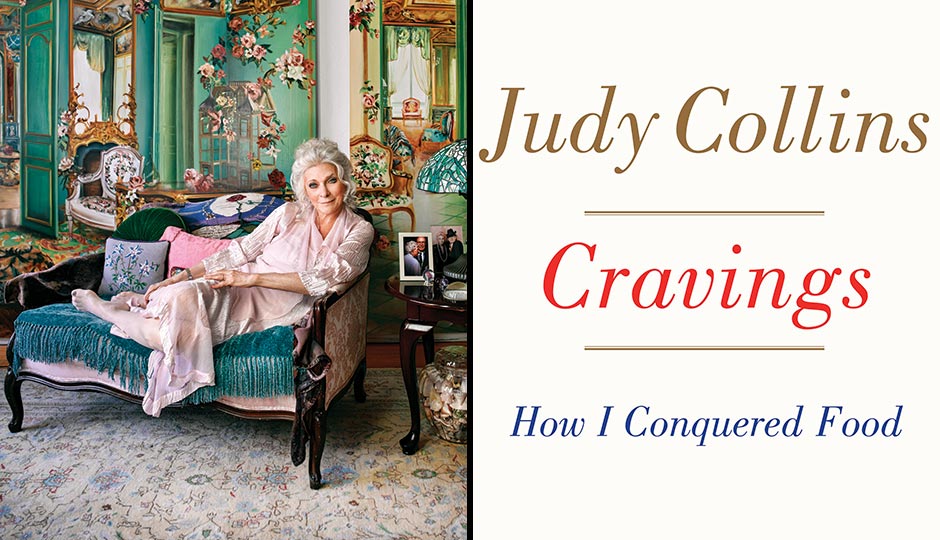 Singer Judy Collins doesn’t mind at all if you bring up the whole “Suite: Judy Blue Eyes” homage. In fact, she’s meeting up with former boyfriend, songwriter Stephen Stills, in a couple of weeks, and they are headed out on tour together at the end of July. Never mind that the song is about their breakup — Collins says the fact that people remember it (and many of her songs, including “Both Sides Now” ) is a “fantastic honor,” and calls herself the “luckiest person in the world.”

It’s a bit of an odd thing to say after a 30-minute conversation about her alcoholism, bulimia, self-harm, and son’s suicide. In her new book, Cravings: How I Conquered Food, (not to be confused Cravings: All the Food You Want To Eat, by model and hilarious Tweeter Chrissy Teigen), Collins focuses on her journey through alcohol and food addiction.

For most of her life, she moved from food (mostly sugar) to cigarettes to alcohol and back to food, throwing up every day for 11 years while bingeing on Almond Joys and Necco Wafers. It is a combination of a restricted diet, meditation, and recovery meetings that has helped her with sobriety, one she practices daily with meetings and mindfulness.

Collins passionately insists that she has found the answer to her food addiction, and hopes the book helps others walking the same journey. She will be talking about her new book at the Parkway Central Branch of the Free Library on March 1st at 7:30 p.m. Tickets are $15, $7 for students.

Don’t take this the wrong way, but it’s kind of nice to hear that you’re not perfect. That this beautiful woman with the amazing voice and the career is kind of …
A mess, right? Most people are a mess part of their lives, and the beauty is figuring it out, how you get sober or get through the physical addiction and make it through. Surviving my son’s suicide? That was big, because that can kill you too. But you’re not hanging out there alone. You have to get online or get on the phone or find a group and find others.

This book isn’t about your music, but your journey with addiction, particularly with food.
For me, it was a long, hard journey. I would like to save people that difficulty by starting with the solution. The secret is to get off sugar, starches, grain, corn, flour, and all that crap.

That’s pretty intense.
It’s hard for the first 10 days to two weeks, and then all the cravings will disappear. The truth is food is everywhere. You have to be the gatekeeper. Society is not going to do that for you.

Now what do you eat? What did you have for dinner last night?
I have abundant meals every day, and I have no cravings, and I get to eat all these fabulous things. Let me think. I wasn’t feeling well when I came home, so I had chicken soup and two ounces of cheese — real-fat feta cheese — and a big salad.

How did you feel about having an eating disorder? Did you keep it a secret?
For a long time, nobody talked about eating disorders. When I got sober in 1978, no one really understood what eating disorders were, no one talked about them. I had one and I didn’t know what it was. It wasn’t until I started going to anonymous programs about food, and of course they knew what it was. … Now people understand. They understand why Karen Carpenter died. Why it was such a big deal when Princess Diana talked about her bulimia. It’s a big deal. It can lead to death, and it has.

Throwing up every day for 11 years is going to have some health effects. What were the consequences?
Well, I had a hemangioma [a kind of polyp] on my vocal cord, probably due to the combination of drinking and bulimia. And with 11 years of throwing up, I’ve had problems with my teeth the whole time — probably 15 or 16 root canals that could have been prevented, and now I have implants.

Did your music provide a safe space from the addictions, or did it fuel it?
If I didn’t have the music, I’d be dead. It’s curative and soothing and an inspiration.

How is your life now?
When I became abstinent [by cutting out all the grains, sugar, and corn], I could work better and faster. The angst and chatter in my head ended because I wasn’t always thinking about what I was going to eat and when, and can I just have a little? It’s gone. Now I have a plan, I have three meals and two snacks and fruit. I go to meetings, I have people on the phone with me, for food and alcohol meetings every day.