The Philly native will be performing songs from Phantom of the Opera, Les Miz and other hit musicals. 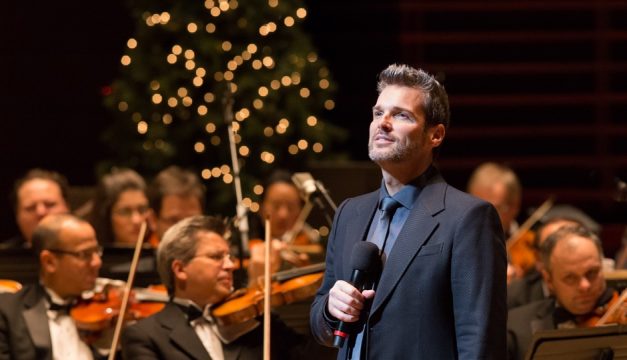 Hugh Panaro sings with the Philly Pops during the orchestra’s 2014 Christmas Spectacular.

Hugh Panaro played the title role in The Phantom of the Opera on Broadway more than 2,000 times, and somehow he never got tired of it.

“The thing that’s so great to me about theater is it’s a living, breathing organism. The variable that’s always different is the audience,” Panaro says. “There are nights that you might not be feeling well, you might be sick or physically tired, but there were never nights were I was like, ‘oh gosh, I have to do this again.’ I always was excited to do the show, and I think you have to have a certain amount of gratitude, to realize how lucky you are to have this role.”

The Philly native grew up in East Oak Lane and went to Temple before making his Broadway debut as Marius in Les Miserables. When he later joined the Les Miz cast at the Walnut Street Theatre, earning a Barrymore Award in the process, it was as Jean Valjean. But Panaro is best known for The Phantom of the Opera: He’s been cast as both Raoul and the Phantom, the latter on and off over 15 years.

This weekend, he joins the Philly Pops, led by guest conductor David Charles Abell, along with Broadway stars Rachel York and Alli Mauzey and the 180-voice Festival Chorus for the Blockbuster Broadway series. Along with “The Music of the Night” and “Wishing You Were Somehow Here Again” from The Phantom of the Opera, the song lineup includes selections from Wicked (Mauzey played Glinda on Broadway), Les Miserables (York was Fantine), Miss Saigon, Hairspray and Beauty and the Beast.

Ahead of the Pops performances, Panaro answered a few questions about how he went from the Huntingdon Valley Dinner Theatre to the Great White Way.

How did you get into singing and acting?
My mom and dad took me to see my very first Broadway show when I was 12, because Andrea McArdle was from our neighborhood in Philadelphia and she was playing Annie. I think my mom saw a segment about it on the Today show. So we piled in the station wagon and went to New York and, the story goes, from the minute the overture started I was like a statue. I didn’t move or blink, I was transfixed. When we got home that night, it was very late but I sat down at our piano and started playing songs from Annie by memory.

Did you start performing when you were still in school?
My parents got me my first voice teacher, who took me to audition for The Sound of Music at the Huntingdon Valley Dinner Theatre. That was my first professional job. I was Friedrich, eight shows a week, and I always joke that I’ve been doing eight shows a week since I was 13 years old. All through high school and all through Temple University, I continued to do theater at night. The day after I graduated, my dad put me again in the station wagon and drove me to New York. 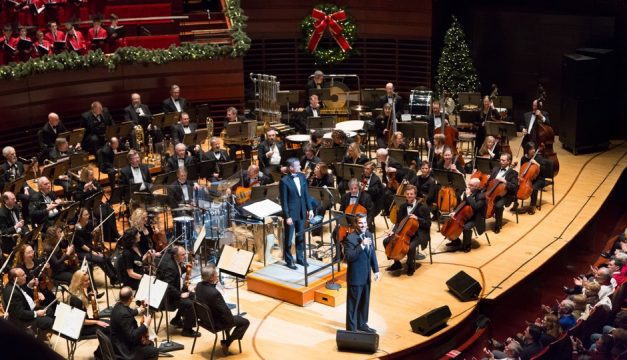 Hugh Panaro with the Philly Pops.

Did you start getting theater work in New York right away?
I bought the trade papers, like Backstage and Show Business, and it was like you see in the movies — I would circle things in red. I started auditioning, and I was super lucky: I had my first off-Broadway show in my first two weeks in New York. Granted, I think I made $80 a week, but I didn’t care. I was over the moon to be able to say, “I’m in a show in New York.”

What was it like performing in Phantom so many times across the years? How did you keep it fresh for yourself?
Each time I’ve been in the show, I’ve been different. You live through things that change your life, that affect who you are. But the other thing is that every night is different. There are going to be nights that you go out and the audience is very responsive, and other nights you think, “Are they there?” You find yourself reacting to the energy that’s coming across. And on a very matter-of-fact level, as actors we’re paid to go to work and do our best job. Every person who sees the show is seeing it, possibly, for the first time. So it’s my responsibility to give a fresh, relevant performance every single night. There may be that 12-year-old child out there, like me, seeing their first Broadway musical, and that’s my one chance to inspire them to pursue the arts, the same way I was inspired.

What’s it like playing a hometown show, like Blockbuster Broadway with the Philly Pops?
This sounds so corny, but no matter how many times you sing in public, when you know your mom is in the audience you want to be the best version of yourself you can possibly be. I have family and friends coming, my voice teacher from the time I was 12 is going to be there, friends who I went to college with, people I grew up doing dinner theater with. It’s mind-blowing, it’s like a big reunion. I feel very, very supported when I’m performing in Philadelphia.