Lee Coffey’s virtuoso play is a sobering glimpse of a world we don’t often see on stage. 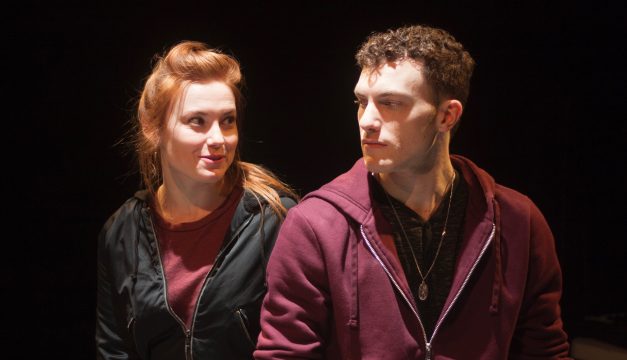 Leper & Chip lasts just over an hour, and has two actors on a nearly empty stage. If you’re wondering how much can happen under these circumstances, consider that just days ago, a lone man at a podium for 70 minutes nearly destroyed the concept of American democracy.

Lee Coffey’s virtuosic play is nearly as grim, though it’s action-packed and has humorous and even romantic moments. Set in a dangerous Dublin neighborhood, Chip (a young woman) and Leper (young man) are, after a fashion, a couple.  Mostly, though, they function in the play as separate narrators, providing complementary chronicles of the world they inhabit. It’s a place besieged by troubles coming on constantly and from all sides—a community where violence begets violence, and happiness stands only a fleeting chance. (If you are thinking this sounds like a contemporary spin on Shakespeare, you’re on the right track.)

Coffey deftly handles the complex, interwoven narrative threads, moving us backward and forward in time, filling in the details. Leper & Chip is definitely not for the faint of heart—there’s liberal use of the f-word and the c-word, and the brutality of the descriptive passages is like a punch in the gut. But it’s a sobering glimpse of a world we don’t often see on stage.

Tom Reing, one of Philly’s best directors, delivers an energized, high-style production, and the actors (Katie Stahl and Liam Mulshine) are appealing. But the elegantly spare design is far removed from the blood and grime we hear about, and Stahl and Mulshine’s kempt good looks—shiny hair, clear skin, straight white teeth—would not likely be seen on people living as Leper and Chip do.  Maybe the audience needs this distance—to really see what the characters describe could be unbearable. Still, it feels too easy to be bystander, watching it through a filter.

But it’s an impressive introduction to Coffey’s work—he’s a gifted writer. I fear, though, that he may be snapped up by Showtime’s The Affair—his ability to juggle multiple perspectives is made-to-order for that show, which is now flailing and desperately needs just the kind of high voltage jolt that Leper & Chip delivers.