Plus: Photos from his explosive set at Festival Pier Thursday night. Last night’s Armin van Buuren concert at Penn’s Landing’s Festival Pier felt like a sort of religious revival pimped out with glow sticks, fog machines, lasers, LED walls and electronic bass so deep and so loud your internal organs quivered to the beat. Adoring trance music fans didn’t find God, but a communal aural euphoria that held them tight through the two-hour set.

The technical skills and taste that earned van Buuren his No. 1 world deejay ranking for five years by DJ Mag, the EDM bible, were on display as fans danced, smoked, drank beer, pounded their fists to the sky and generally had a freewheeling great time.

van Buuren kicked off his set with the title track from his upcoming studio album, Embrace (releasing on October 29th), and sprinkled in a few more new tracks (“Another You” and the Hardwell and AVB collaboration, “Off the Hook”), while giving the fans plenty of familiar favorites (“Panta Rhei,” “Ping Pong,” “In and Out of Love” and “This is What It Feels Like”).

Before van Buuren masterminded his petite Philly set along the river last night (he famously holds the record for the longest deejay set ever with his 12-and-a-half-hour show in The Hague a few years ago), we were able to catch up with the 38-year-old Dutchman earlier at his hotel to talk about career, fame and his words to live by. With every album I imagine you set creative challenges, what did you learn from Embrace?
First of all that I know so little. [laughs] I’ve been producing records for more than 23 years, but there’s so much to learn about record producing, arrangements and song-writing. The techniques are coming so fast, with new sounds, new plug-ins and new hardware being invented almost every day. It’s hard to keep up with everything. You have such a variety of equipment to use to be creative, but it’s exciting.

One of the goals I set with the new album is to express the message “embrace”—embracing different cultures and different music styles, like jazz for example. The title track, “Embrace,”  I made with Eric Vloeimans, a Dutch jazz trumpet player. I’m a big fan of jazz, believe it or not. Don’t ask me to play any jazz chords or tell you any jazz history. I’m just a lover for jazz music because it’s so different from dance music. When I chill at home, I listen to it a lot. I really fell in love with the sound of the trumpet.

And I was thinking there’s never been a collaboration between a trumpet and a trance track so that’s a different experience. I premiered the track last week on my radio show [A State of Trance, heard by more than 33 million listeners on 100 FM radio stations in 84 countries] and the reactions were nothing but positive. Seems like people appreciated the fact that I went out of my way a little bit.

If you’re a trance artist it’s sort of illegal to go out of your safe home and experiment. I find that very restricting creatively. I am a trance artist and that’s what people know me for and that’s what I’ll always love, but in order to make music, I need to do something that inspires me. That’s why I work with all these different people and all these different instruments on Embrace.

How much of your concerts are pre-programmed and how much is old school, on-the-spot improvisation?
I’m pretty much an old-school deejay. I started deejaying back in 1996. I come from the days where the deejay was just a little bit higher than the bar man. The club where I started working—it was twice as big as this hotel room. It’s funny isn’t it?—I was actually the bar man and the deejay at the same time. When you’re reading the crowd, what are you looking for?
That’s the secret. I have a certain sound and style, and I have an idea about how I want to bring my sound to the fans. Of course, I’m not playing exactly what the crowd wants me to play. I have sort of a golden rule for myself: to always premiere and experiment with new tracks and new sound. Usually I start up my set with a big opener and then another big track and then I go a little bit deeper. I see how deep I can go. You see, if there’s a lot of girls, they usually like vocals a little bit. I’ll [figure out what to play] if there’s really a trance-y crowd or if people want to hear my big hits. I never play the same set twice. Ever.

It feels like the Dutch have cornered the market on trance music with many of the top deejays coming from the Netherlands. Why is that?
It’s something in the milk.

You played for the newly crowned king and queen of the Netherlands, Willem-Alexander and Máximaat, at the 2013 coronation with the Royal Concertgebouw Orchestra. That’s quite a statement about how important this music is to your country.
That was a statement. That was the biggest gig I’ve ever done. Well, the gig with the most impact. The king came off the boat and came on stage. So that was kind of revolutionary. That’s the image that people remember from that day, that our newly crowned king came on stage and danced with the orchestra and me. Yeah, that was kind of unexpected. Great timing though because a day later, I released my Intense album. It wasn’t planned either.

Some pop concerts are very theatrical with teams of dancers and loads of stage props, but audiences just stand watching passively. But at your shows—with only you behind a massive console — you create a connection with the audience where they seem euphoric. Why do you think the crowd reaction can be so different?
There’s a big shift right now with a whole new generation. People don’t want to buy a ticket, go to a show and just watch anymore. That’s the reason why theaters are having such difficulty pulling in audiences. People want to be part of the experience. That’s why on my recent tour I worked with a very famous Dutch theater director, Jos Thie, who works in the field of opera and classical music but also standup comedy, and all that sort of stuff. He went to my show, and this is what he told me: he said “This is revolutionary. You’re making me realize this is the new way of entertainment.” People want to be a part of the show.  I think it goes further than just deejaying, it’s the future of theater, the future of performance. With your stature in the EDM world and 180,000 fans chanting your name at your concerts. how do you stay normal?
You can’t really. Seal’s right, “We’re never gonna survive unless we’re a little bit crazy.” I have this gigantic Darth Vader in my game room. But I always thought, I better spend my money on that rather than putting it in my nose or in my arm. I see the dangers of being on stage to be honest. There’s a really great book about it by the Irish professor Ian Robertson. He wrote a book called The Winner Effect: The Neuroscience of Success and Failure. What was interesting about the book is that he started to recognize certain patterns with people who have power or who are famous … You feel like you are on top of the world and you can do everything because everyone adores you. That drives you crazy. His theory is that the shape of the brain changes because [the adulation] is a drug.

Neural pathways are rewired?
Yeah, if you perform for immense crowds you get a rush that is unbelievable. Ask yourself why the Rolling Stones are still on stage. That’s because they are addicted to that rush.

Like a dopamine rush?
Yeah, it releases in your head, and in his book he compares the dopamine shot to taking cocaine. I’ve never used cocaine and I never will. I hate drugs, but that’s what he says in his book. He says you can compare that rush … I guess I’m addicted to it. It’s not normal, and the contrast [between my private and publc life] for me sometimes couldn’t be higher. Yesterday morning, I was swimming with my son at his baby swimming class. He’s 2 years old. When I rode back with him on my bicycle, we had to ride fast because it started to rain, and I seriously thought, “I don’t know if I could be more happy in the world right now” and I asked myself “Can I be more happy with my son in the pool,  just daddy time, or standing in front of a massive crowed here in Philly?” I don’t know what makes me more happy. It was both a rush, but I guess being alone with your son in a pool, that’s real life. They can’t take that away from you.

What do you deejay in the car for your two kids? Bert and Ernie from Sesame Street. I love it because you can listen to that music again without feeling weird. And Sesame Street is actually really great and really funny. [laughs] … So, we sing along in the car. We are this happy family and then a few hours later, I am standing in front of a crowd of thousands of people. So yeah, the contrast sometimes couldn’t be bigger, but, hey I’m not complaining. It’s the best job in the world.

You’re in the sweet spot of career, family, health. What are your words to live by? Don’t be a prisoner of your own style. Embrace. You can mean that with everything—food, religion, politics, with music of course. It’s good to have a style, but don’t be afraid of the unknown. Life can be so much richer … Life is short, experiment. Only legal experiments. [laughs] And don’t forget to hug your loved ones because life is so short. Every day! 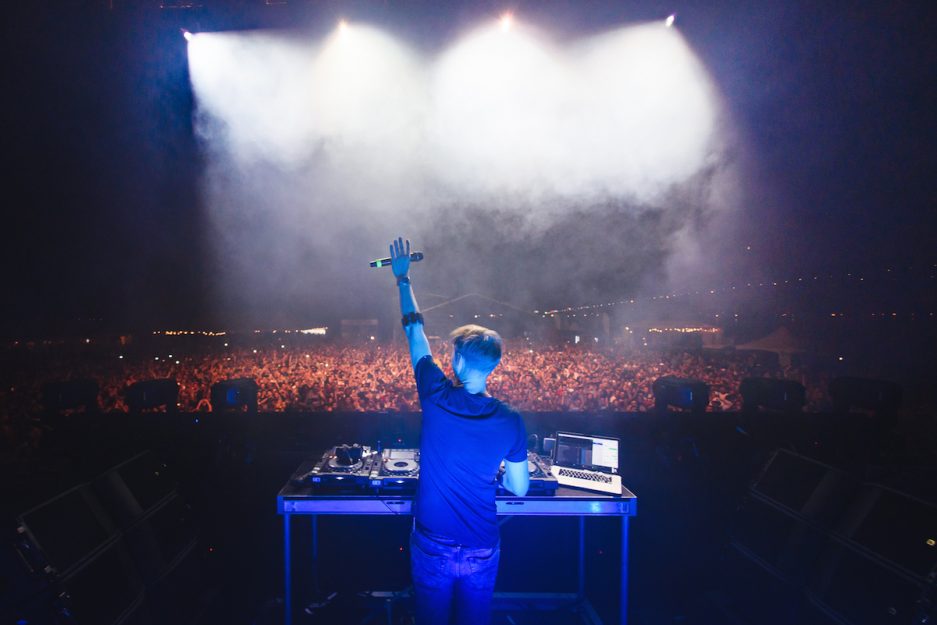 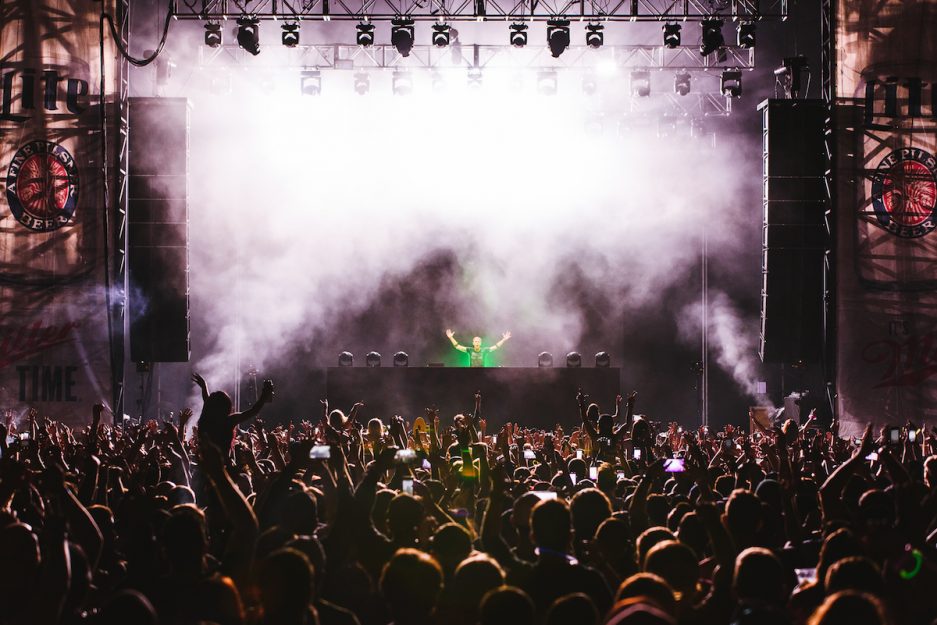 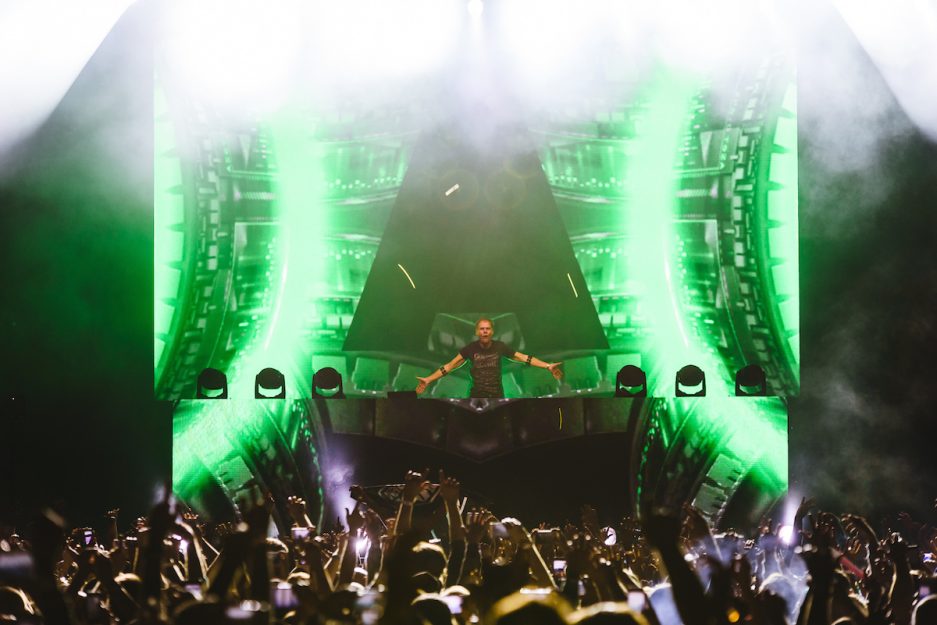 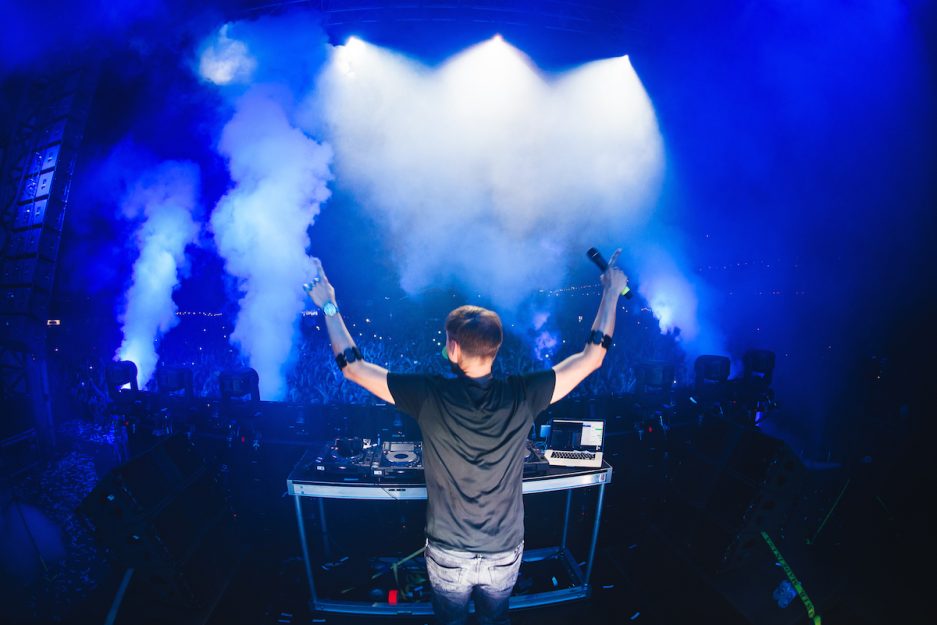 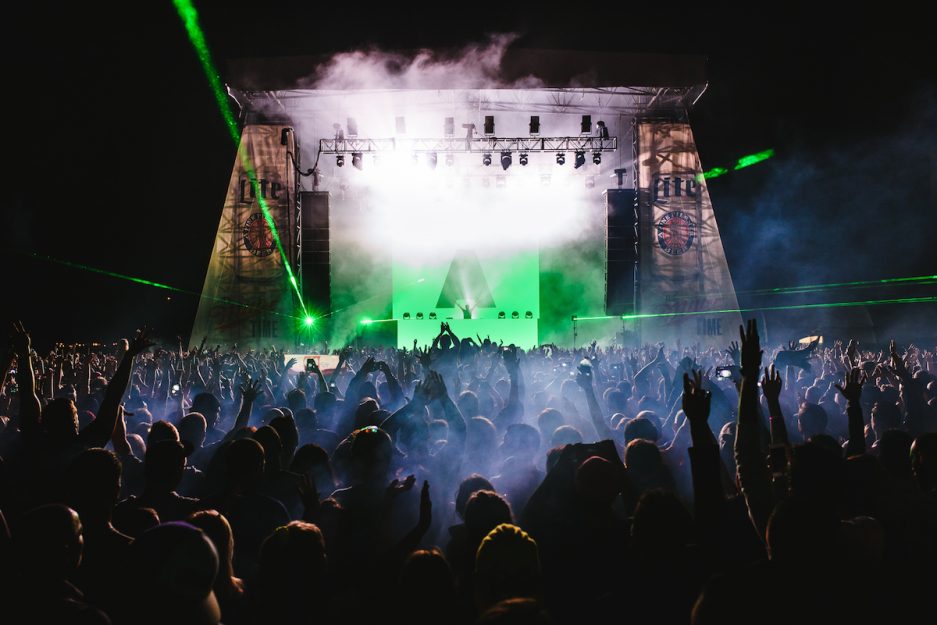 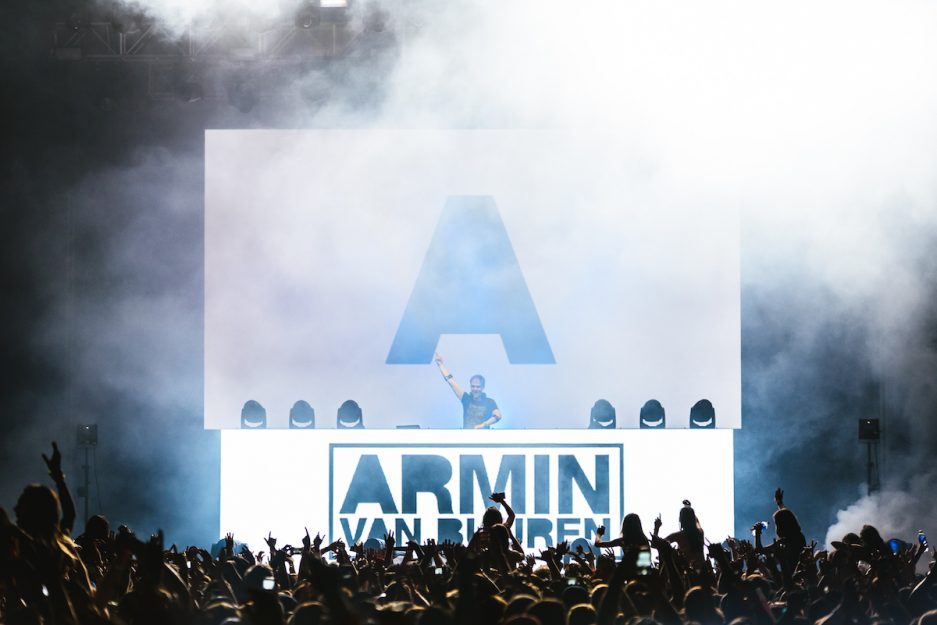 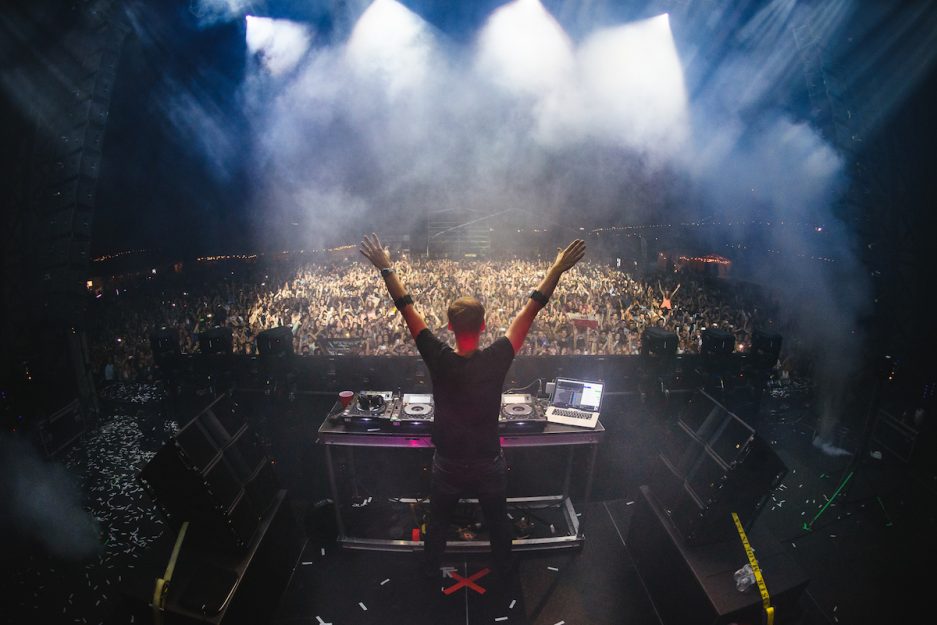