Whether we’re scouring the Internet for new routes or badgering friends to become our new running buddies, we’re always looking for ways to change-up our fitness routines. Because, let’s be honest, even the most dedicated among us get sick of the standard loop around the neighborhood. To prevent a potential exercise slump, New Balance has come up with three runner-approved routes — ranging from a 5K to an 11-miler — to integrate into your fitness routines.

Each route begins at New Balance’s gorgeous new Rittenhouse shop (go visit them!), so lace up, turn on an awesome playlist, and use #seemyrunPHILLY on social media to see who else is hitting the trail. Happy running! 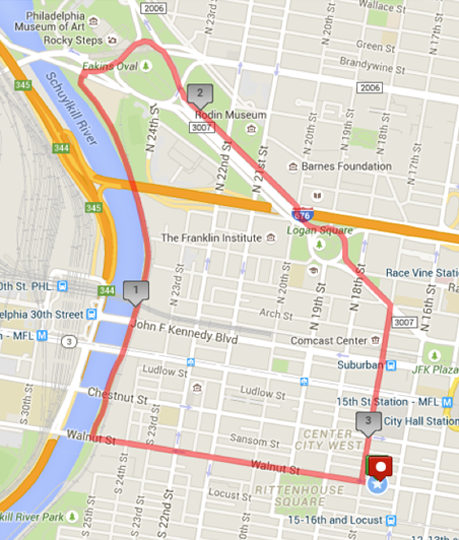 Starting at the New Balance store, run toward Walnut Street, passing Rittenhouse Park. As you approach the bridge, head down the stairs and take a left on the bike path that follows the Schuylkill River. You will pass the 1 mile mark on your way, and get your first view of the Philadelphia Museum of Art. Taking a right off the path, the museum’s storied steps will be on your right.

As you turn right onto Benjamin Franklin Parkway, you will see the Rodin Museum, your 2 mile indicator. This is followed by the Franklin Institute and Free Library of Philadelphia. From there, head through Logan Square Park (psst: cool off with the spray from the Swann Memorial Fountain). Turning right onto 17th Street will signal the final leg. As you approach the Comcast Building on your right, Walnut Street is only a few blocks ahead. Turn left and you’ll be back at New Balance to wrap up your run with a little shopping. 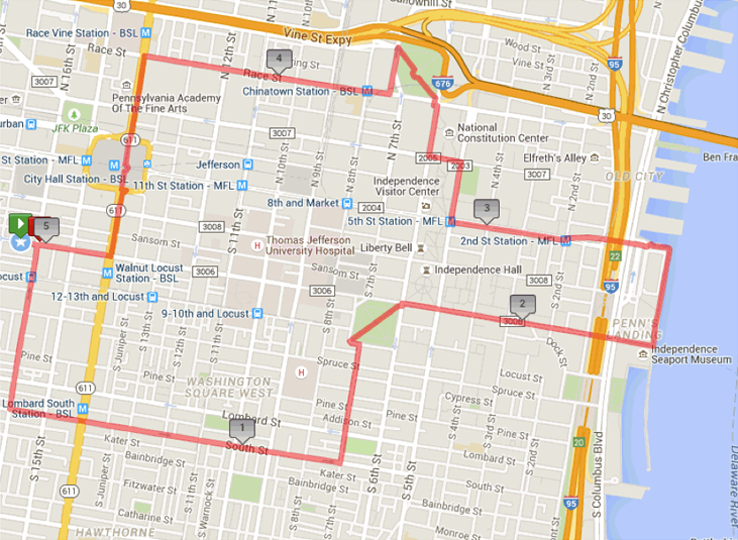 Begin at the New Balance Philadelphia store, and head towards 17th Street, taking a right. When you reach South Street, turn left and cross over Broad Street. Between 11th and 10th streets you’ll find the eclectic Philadelphia Magic Gardens.

Turn left when you hit 7th Street, bringing you to Washington Square Park, which houses a monument to the soldiers of the Revolutionary War, as well as some information on the founding and city planning of Philadelphia by William Penn. Cutting through the park will bring you to Walnut Street. Head right and pass the backside of Independence Hall, where the Declaration of Independence, Articles of Confederation, and US Constitution were signed.

Continuing on Walnut Street will bring you to the Delaware River and Penn’s Landing. Head left for a short stint along the river, and then back up the stairs onto Market Street. At the 3 mile mark, you will reach the Independence Hall area once again, which includes the Liberty Bell and Constitution Center, which you will pass as you head north towards Franklin Square park and Race Street in Philadelphia’s Chinatown area.
Race Street will bring you back to Broad Street, where a left turn will have you heading straight through the courtyard of City Hall. Once you reach Walnut Street, the New Balance store and your 5 mile mark are only a couple blocks away. 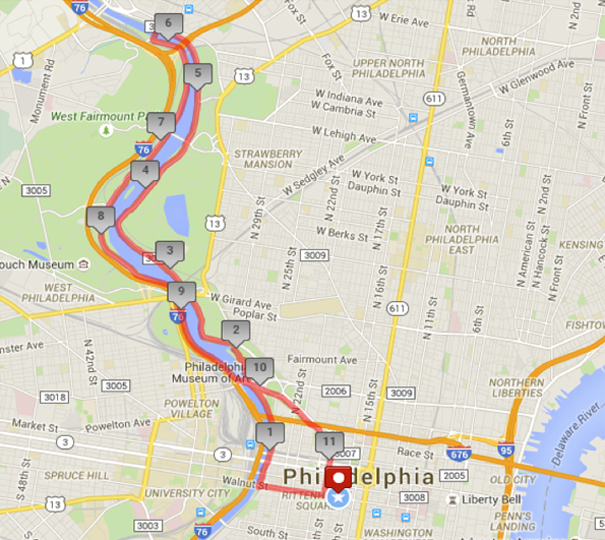 Beginning as you would for the 5K loop, head west from the New Balance Philadelphia store on Walnut Street, passing Rittenhouse Square Park on your left. As you reach the Schuylkill River, go down the stairs and take a right onto the river bike path that will be your trail for the majority of this 11.4-mile course. Just before 2 miles, you will pass the Philadelphia Museum of Art and begin seeing Boat House Row.

The bike path will lead you all the way to the Philadelphia suburb of East Falls. Just before the 6 mile mark, turn left onto Falls Bridge, crossing over the Schuylkill and bringing you back towards Philadelphia. The path here runs perpendicular to Martin Luther King Drive, which is closed off to all traffic on the weekends from the first weekend in April until the last weekend in October, so you have a quiet stretch from miles 6 through 9. Around the 9.5 mile mark, you will get a stunning view of the Philadelphia skyline and the Fairmount Dam.

The path will cross back over the river and empty out around the Philadelphia Museum of Art. Transition from the bike path to Ben Franklin Parkway (as you would for the 3-mile loop), passing the Rodin Museum, Franklin Institute and Logan Square. Turn right onto 18th Street, heading south and finishing on Walnut Street at the New Balance store.

To try out one of the above runs, visit New Balance’s gorgeous new Rittenhouse location at 1615 Walnut Street, and don’t forget to use the hashtag #seemyrunPHILLY.

SPONSOR CONTENT How to Prevent Chafing During Long Runs