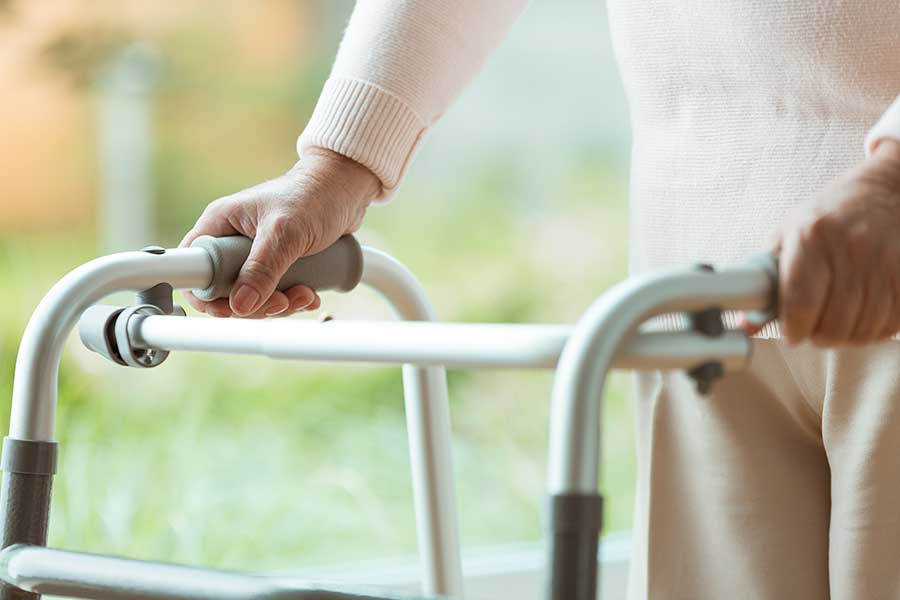 Sister Mary McNulty is always on the move. As the principal of a West Philadelphia Catholic elementary school, she’s responsible for more than 500 kids from 43 different countries. “I wake up and spend the whole day running. I never know where I’ll get called to,” McNulty says. “We have two buildings across the street from each other, so I spend my time dashing from one to the other.”

But in 2013, that mad dash was becoming increasingly difficult for her. She had been suffering from pain in her leg and hip. After a bad fall, her leg pain continued to escalate. When the pain got worse and spread into her back, her doctor insisted she see a specialist—Dr. David Vegari, an orthopedic surgeon and joint pain specialist at Lankenau Medical Center.

“When I went to Dr. Vegari, I thought he would give me a shot of cortisone or something like that,” says McNulty. The news was not what she was expecting. “He said, ‘I think you need a full hip replacement.’ I was like, ‘Wait a minute. I’m too young for that!’”

At 53, McNulty was indeed younger than the majority of hip replacement patients. But Dr. Vegari explained that this is changing. As youth sports have intensified and grown more popular, people are wearing out their joints quicker than ever. McNulty had been an athlete as a young adult, and that, along with her fall, had brought her to a crossroads sooner than she’d expected.

Concerned about how she’d handle her physically hectic job while dealing with a healing hip, McNulty was hesitant. Fortunately, Vegari had an answer for that too. “He told me that his procedure (an anterior hip replacement) gets people back on their feet as quickly as possible,” she says.

According to Vegari, the option provides numerous benefits. “We spread the muscles apart, rather than cut into them directly,” he says. As a result, “you usually get rid of your walker sooner, you get rid of your cane sooner, and there’s no limitation as far as bending, crossing your legs or sleeping at night.” The promise of quick recovery and free mobility appealed to McNulty. She agreed to the procedure, her very first operation.

The night before her surgery, she was nervous. But then her phone rang—it was Vegari calling to check in and answer any questions that might be weighing on her mind. His encouragement and compassion soothed her nerves. “I was amazed at his kindness. I got off the phone and thought, I’m going to be able to sleep tonight,” says McNulty. When she went in for surgery the next day, Vegari was once again by her side, walking her through the operation and every team member’s role. “I knew I was in good hands,” she says.

When she woke up from surgery, a doctor was by her bedside, holding a walker. “He looked at me and he said, ‘C’mon, get up, you’re going to walk to the recovery room.’ And I said, ‘You’re kidding!’” Sure enough, a few moments later she was up and out of the room. There was no need for special exercises or even pain medication, and she left the hospital without needing physical therapy, a standard requirement for most hip procedures. By the end of the week, she was joining in on a yoga class at her convent. The other sisters were shocked. “I was the talk of the convent, because they couldn’t believe it. You aren’t supposed to get better this quickly,” McNulty laughs. “To this day, there’s a sister who says, ‘I envy you because you don’t walk with a limp.’”

Before she knew it, she was back to rushing between her two school buildings, feeling more secure than ever. “I hadn’t realized how much my pain was holding me back,” she says. “My only regret is not doing the procedure sooner.”

Today, McNulty’s making up for lost time by going back to her favorite activities and a few new ones as well. “I’m back to doing the things I love,” she says. “But my newest favorite thing is horseback riding in the Rockies,” she says, smiling. “And now I can get off the horse, after the trail ride, with some dignity.”