Inspiring Confidence: Why Heather Mitts is the Role Model Every Young Athlete Needs 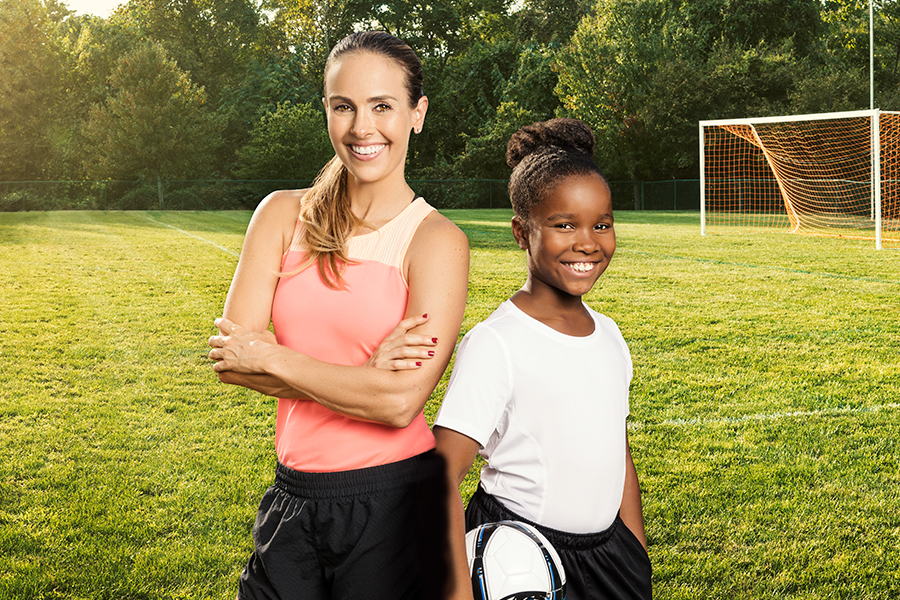 Heather Mitts won three Olympic Gold Medals as part of the U.S. women’s national soccer team, and she’s one of only four stateside soccer players to do so. Today, she’s a figure — no, a force — in professional sports. She co-founded two companies, Ceres Platinum Group which assists female athletes and businesswomen on their financial success, career advancement and life. She also co-founded Empowered Pregnancy, a workout series for pregnant women. She serves as a sideline reporter, broadcaster and soccer analyst in addition to her role as a mother, motivational speaker and, of course, an athlete.

Her secret? “If you love something, you are willing to work for it,” she says. “You have to be willing to never give up. That way, you can truly feel satisfaction when you achieve your goal.”

We asked Heather how it feels to achieve goals time and time again, both literally and figuratively, and how important it is to approach your dreams with confidence and clarity.

You started playing soccer when you were six years old. What did the landscape look like when you were growing up?
It was booming, and kids were flocking to the sport. My brother and I would have daily 1v1 battles in the backyard — we were obsessed. After winning the gold medal in Atlanta, the country embraced the U.S. women’s team and they became more visible in the media. Then, the 1999 World Cup would change the landscape for soccer forever.

How can young women today help define the future of professional sports?
Watch, learn from and support the positive, strong, inspirational role models. Emulate them and aspire to be the next in line, but better than whoever came before you.

What about the future, in general?
With actions, not words. We need to show the next generation what it takes to achieve greatness while being a kind, compassionate and generous human being.

After tearing your ACL, you had to miss the 2007 World Cup. Looking back, was there a plus side to that experience?
Well, a lot of people said I would never come back, but I used that as motivation. I love the quote, “tell me I can’t, then watch me work twice as hard to prove you wrong.” I treated rehab like training, making sure not to have any setbacks and always maintaining a positive attitude. I trained twice as hard to make up for lost time. So when I was receiving my second gold medal, I felt complete appreciation for the opportunity to play soccer again and reach that ultimate goal.

What’s your advice for turning negative situations around?
There is no point in feeling sorry for yourself. Always try to find the positive spin on every situation. Everything happens for a reason. Make the most of it.

You’ve been fearless in your career. What were you afraid of when you were younger?
Snakes, sharks, the dark and being outworked by a peer!

Click here to learn more, and don’t forget to visit Honda at the Philadelphia Auto Show to meet Chill Moody (January 27th), enter to win a Rodney McLeod autographed football (January 28), and  meet Heather Mitts (February 3rd), as well as BBBS Independence Region CEO Marcus Allen and his team to find out how you can help local kids drive their dreams.