How Philly Does Business, As Told by Wells Fargo Center Exec, Mike Scanlon 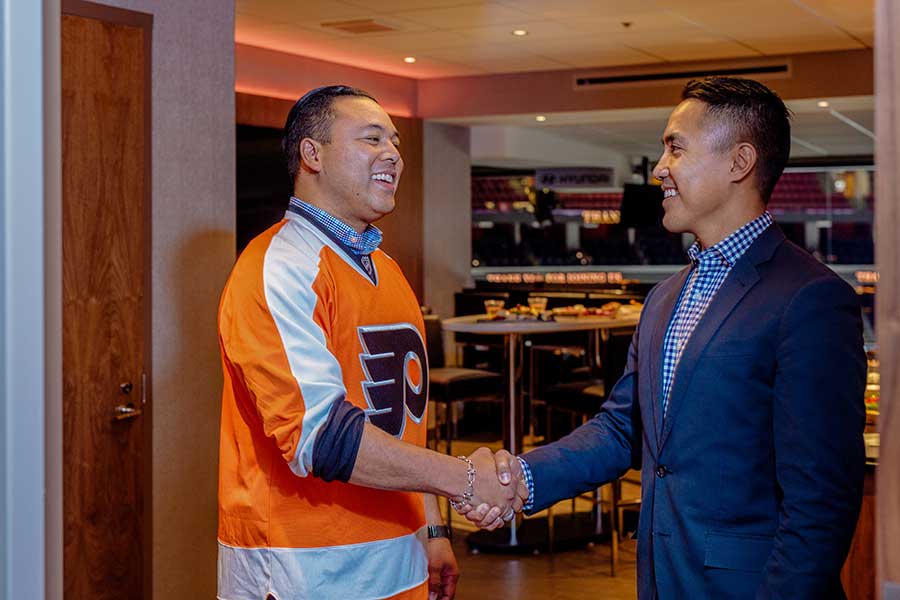 With an extensive career with Comcast Spectator (he’s been with the brand since 1995), the Boston native’s worked everywhere from Colorado Springs to Trenton, Portland, to St. Louis, before settling in Philly in 2010. Prior to his role at Wells Fargo Center, he was in charge of opening the MLS stadium in Chester for the Philadelphia Union. Today, he and his teammates are tasked with keeping the Wells Fargo Center renovations going during its busiest season ever (there were more than 50 concerts in 2017!), while still crafting an unforgettable experience for fans.

Here, he shares his thoughts on Philly’s booming business scene, the actual best seats in the house (hint—they’re not courtside) and his passion for his job:

Can you give us a hint of what’s in store for the remainder of the Wells Fargo Center renovations?

The renovation is a four-year process and we just completed our second year—meaning there are plenty more exciting things coming down the pipeline. The first year was a renovation of our suite level, the second year (which we completed this past summer) was all about the mezzanine and upper levels. We redid all 8,000 seats, the bathrooms, added new concession areas, a new state of the art sound system, 150 LED screens and installed two new bars. My favorite feature is the new view of Center City on the upper north side. Next summer we move down to the concourse to build a 4,500 square foot food court, expand the Corona Beach Club and renovate the concession stands and restaurant areas. In 2020, our final year, we’ll renovate our club level with a complete upgrade and replace all seats in the lower sections.

What was the inspiration behind these changes?

The building is 22 years old now and it’s hit a stage where it needed it. We wanted to keep up with the newest in the industry and make sure we were making the building the best it could be for our fans, teams and performers. It’s really an upgrade for all of them. We made the decision to start the renovations in the upper level and work our way down. We wanted to make sure the renovation included all fans, whether they are sitting in the front row or the top row.

What’s it like working in such a face-paced and high-energy environment?

We do 250 events a year and I’ve been in the industry for more than 22 years but every time I see a crowd gathering outside and we are ready to open the doors, I still get goosebumps. It’s a job where people want to come to your place of work and have fun. We don’t physically sell a product but we’re selling experiences and that’s the greatest part of it. That experience doesn’t just begin when they scan their ticket, it’s on their way here, the parking, who they’re engaging with—the whole thing. We can’t control if the teams win or lose but we can control everything else. We can ensure that our staff is friendly, the hot dogs are hot, and the beers are cold and that everyone has a good time no matter what happens on the ice, court or stage.

Why are premium seats so important, particularly in Philly?

Philly’s business and entrepreneurial scene is rapidly growing. From what we’ve experienced, our various premium seating options give companies a chance to have a great time while entertaining clients or potential clients, and a space to celebrate their employees. The premium seats really create a special experience—delicious food and drinks, personalized service and the chance to see unforgettable events.

It’s got to be Gritty. They’re both great but Gritty has been such a phenomenon since he burst onto the scene. He’s so engaging, and the fans love him.

I’m a pizza guy, especially Lorenzo’s in the building. I love Lorenzo’s. My wife would tell you I could eat pizza every night.

Best seats in the house?

I love the first row of the mezzanine. It’s a terrific seat for hockey and basketball particularly. You’re sitting high up, but you’re not far away. You can see everything.

Click here to make a long-lasting impression on your clients in Wells Fargo Premium Seats.

SPONSOR CONTENT We Found the Ultimate Space to Entertain Your Clients