St. Jude Stories: How Giving Back Is the Best Thing for Your Retirement 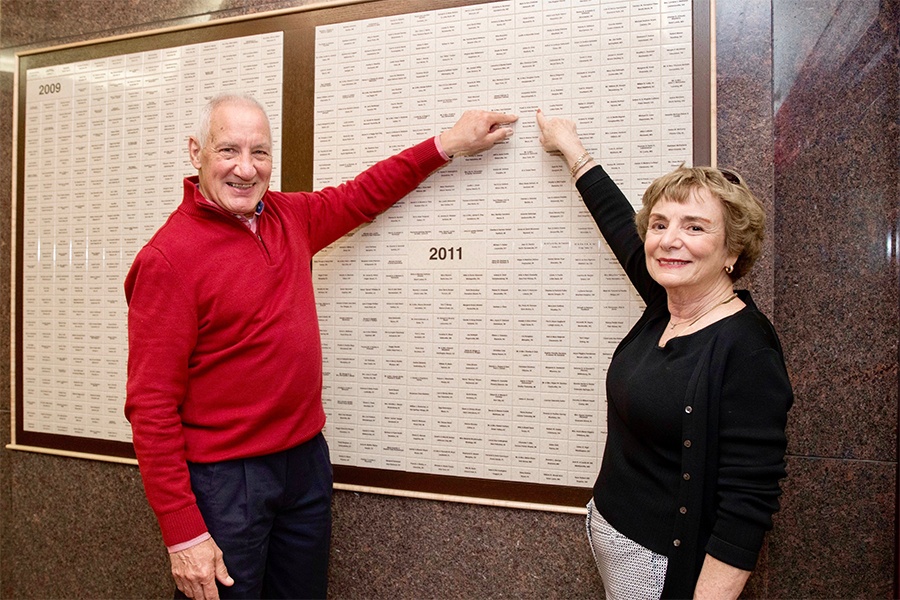 “It was Christmastime, and we were leaving the Concord Mall in Wilmington, Delaware,” says Frank Daresta, age 78. More than three decades ago, as Daresta and his wife Joan got into their car with Christmas presents for their three children, they turned on the radio. Instead of holiday music, an ad for St. Jude Children’s Research Hospital came on, which explained that St. Jude depends on donations to treat children with cancer, without charge for treatment, travel, housing or food. “My wife said, ‘Can you imagine having a child that’s going through cancer around this season of the year?’ The radio went off, and we talked about it all the way home. We thought ‘Look what you could do for a child by donating.’”

The Darestas took the first step on a 30-plus-year relationship that night, donating to St. Jude every year since. The relationship has deepened through years of medical challenges, given them purpose during their retirement, helped them with their financial decisions and ultimately inspired hope for their legacy in their later years. Joan passed away on June 10th, 2019. But she leaves behind a story of what can be accomplished by giving, of how the lives of both the people receiving aid and the person providing it can be transformed for the better.

Joan was first diagnosed with cancer in 1980. Although a surgery to remove her thyroid saved her life, the incident made an impact. An elementary school teacher and mother of three, the idea of children going through what she had faced deeply affected her.

“She was in a situation where she felt blessed,” her daughter, Annette Guagenti, says. “She survived thyroid cancer. She had three kids who grew up healthy. So she was honored to take what she had and give it to other people.” The Darestas began with a $300 donation, and grew it when they could.

“Next year it was $350 because she found another $50 in our budget,” says Daresta. “My wife was like that. If she found something that felt good to do, she went all in.”

Daresta himself found that supporting St. Jude helped him with his own battle with cancer, several years later. After his diagnosis, the Darestas decided to visit St. Jude Children’s Research Hospital in Memphis, Tennessee. Upon observing the children at the hospital (who come from all over the world with some of the toughest cases of the disease), he became inspired.

“A lot of these cancers these kids have, even when they’re in remission, they have no idea when it might come back. Sometimes it comes back and you can cure it, and sometimes you can’t,” he says. “But when I saw those kids at the hospital, they weren’t sad, they weren’t crying. They were happy. They were looking at the glass half-full.”

It not only gave the Darestas encouragement for their own condition, but also gave them hope for each other’s future, as St. Jude invests deeply in the search for a cure for cancer, with more clinical trials for childhood cancer than anyone else. “When they came back from that trip, I remember them being inspired by the tours of the research and medical facilities,” says Guagenti. “It made you feel like this is the place that’s going to find the cure, and knowing what your loved one just went through, it makes you feel a little bit better about what the future holds.”

The Darestas found that a deeper investment in St. Jude benefited them financially as well. They chose to invest in a charitable gift annuity (CGA) by donating a lump sum, which, in return for, St. Jude provides a fixed payment for life that does not fluctuate.  A CGA may also reduce your current income taxes with an income tax charitable deduction.

“The annuity is a great investment that has a great rate of return and is for a good cause. It’s a win-win,” says Guagenti. They also found their social life broadening, as they attended St. Jude events and made important relationships with other people who had loved ones who had faced cancer.

“Dad will get all the information about the events and say, ‘Hey, there’s an event going on this weekend.’ That’s something I’m always interested in doing,” says Guagenti. Most importantly, the Darestas met in person the children they were supporting.

“When they began taking us to dinners, we found the best thing is, you get to meet some of the children,” says Daresta. It was at a dinner that Daresta befriended a St. Jude patient from Chicago, a boy named Brody.

“Brody was from Chicago, and he wanted to be a pitcher for the Cubs. I kept kidding him that the Phillies were going to draft him instead,” says Daresta. The next day, he saw an opportunity to help Brody’s dream come true, when he met a marketing executive for St. Jude from Chicago at another planned get-together.

Daresta asked him if St. Jude had contacts with the Cubs. “I said, ‘The kid I spoke to last night, Brody, wants to be a pitcher. Wouldn’t it be great if he threw out the first pitch at a Cubs’ game?’ And he told me he would make it happen,” he says. “When you can make those kinds of things happen, you can’t believe the joy you get.”

The Darestas’ involvement grew until they became important advocates for St. Jude, appearing in their newsletter and in a donor video on their website, inspiring others to give back. In the process, they were building a legacy that would provide solace for others when they were gone.

Joan passed from pancreatic cancer in the summer of 2019, a loss that Daresta says he didn’t expect to have to face.

“I never expected my wife to die before me. I’ve had three rounds of cancer. You think, guess who’s going first?” says Daresta. But as he and his wife had done before, Daresta and his daughter dealt with the hardship by looking for how they could help others. They set up a memorial fund in Joan’s name for St. Jude, which Guagenti says her mother would be honored by.

“It was exciting to watch the campaign; every time someone would make a donation I’d be like, ‘Mom got 50 bucks!’” she says. “You felt good because you knew it was going to a good cause, and I knew mom would be happy.”

Ultimately, the memorial gave Daresta a glass half-full outlook. “Everyone felt good about doing it. You don’t need flowers. You don’t need candy. The money is going somewhere important, and hopefully somebody is going to live,” he says. “What better thing could you do? She’s helping bring in donations, and I know she’s watching over the kids at St. Jude.”

If you’d like to see what you can do for the children at St. Jude Research Hospital, visit stjude.org/legacy.

This is a paid partnership between St. Jude Children’s Research Hospital and Philadelphia Magazine's City/Studio
You Might Also Like

SPONSOR CONTENT 3 Reasons to Get Involved With St. Jude Presents: A Meal to Heal