On the Market: New Designer Rowhouse in Grays Ferry

A designer with a New York sensibility (and client base) opts to make a fresh start in Philly. This house, which she worked on with its builder from the start, suggests she will do very well here. 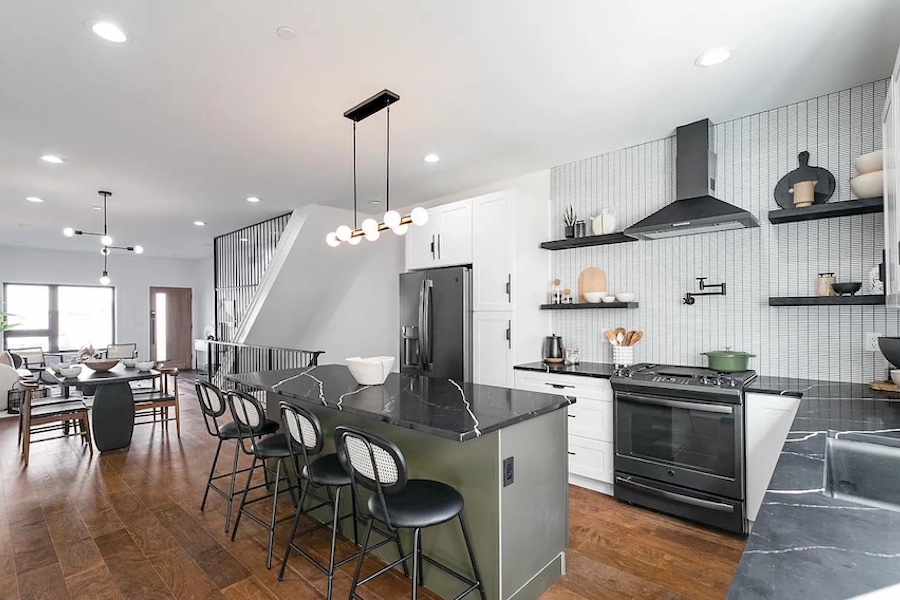 If you haven’t been in Grays Ferry lately — and I suspect that, like me, you haven’t — you might find yourself surprised to see what’s happening there.

It’s a lot like what’s been happening in Point Breeze to its east for a while now, only newer and under the radar.

Take the Grays Ferry designer rowhouse for sale whose main floor you see above. Pretty sophisticated, no? And when did you last see or hear the words “sophisticated” and “Grays Ferry” in adjacent sentences, let alone the same one?

And yet the streets of this historically workaday neighborhood now sprout townhouses like this one that stand in sharp contrast to their surroundings. The photo below shows it with its next-door neighbor. 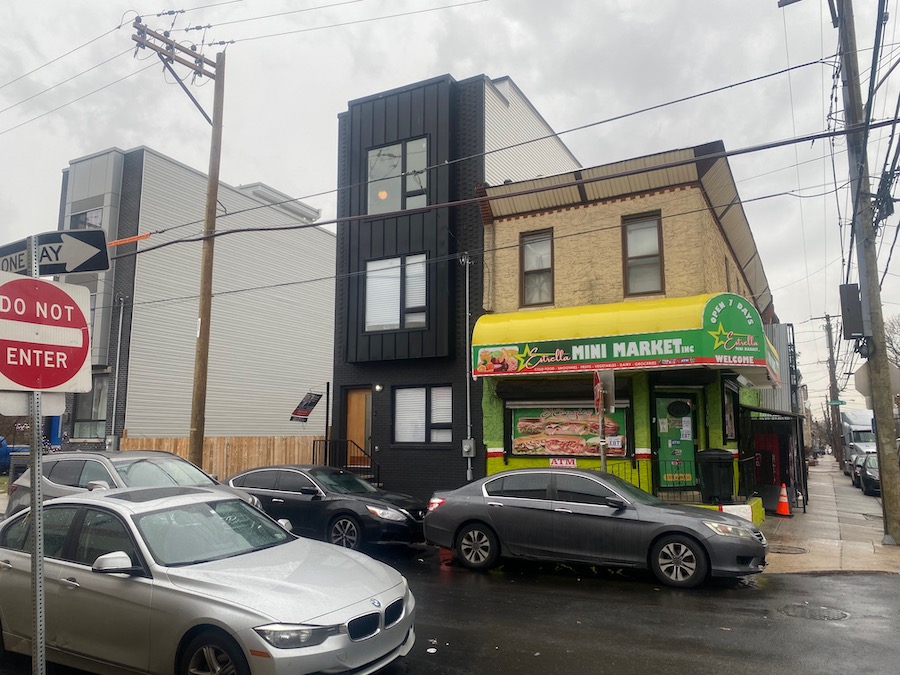 Now you know why the listing agent opted to show the exterior in a tightly cropped, vertically oriented photo in the listing.

However, as that main-floor photo should indicate, this house also stands out from all the garden-variety square-bayed modern rowhouses that have been built around it once you step through its front door.

For that we have interior designer Alexis Serrano to thank. Her firm, founded in North Jersey as LXS Interiors, has designed very striking residences with a distinctly modern sensibility. Now, having built a base of clients and investors in the New York region, she has pulled up stakes and relocated here, doing business as LXS Homes. 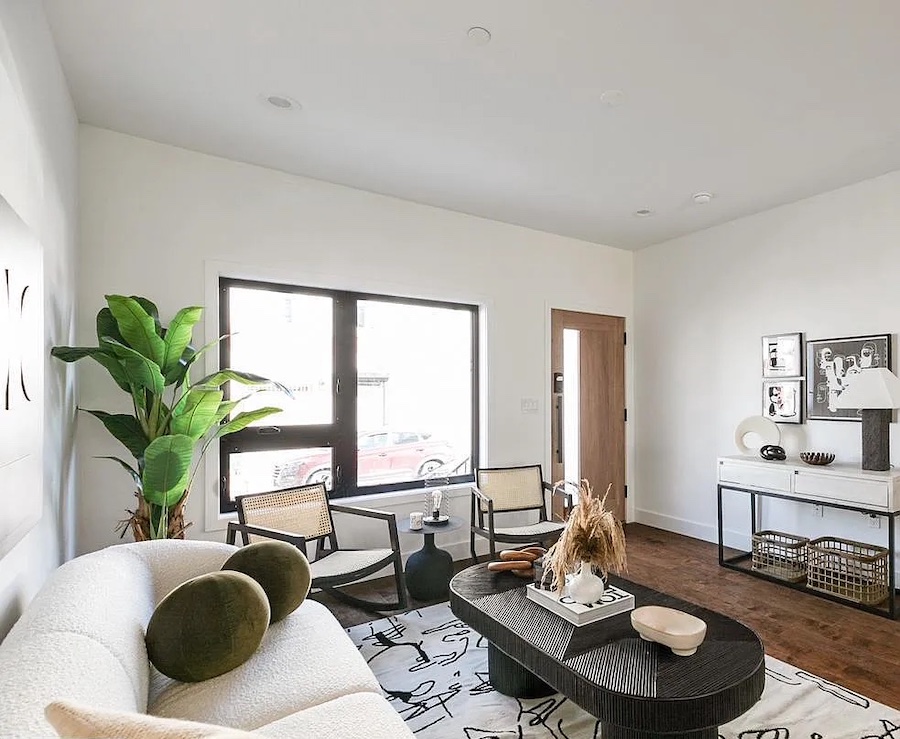 Serrano actually started working with the builder of this house in 2019, before her move. After staging two houses for him, she says, he then asked her, “Do you do interior design?”  After answering that she did, he brought her on as the design partner when this house was still a bunch of blueprints in 2021.

The breadth of her modern sensibility shows up both on the main floor and elsewhere in the house. Postmodern lighting, for instance, hangs over a mid-century dining table. 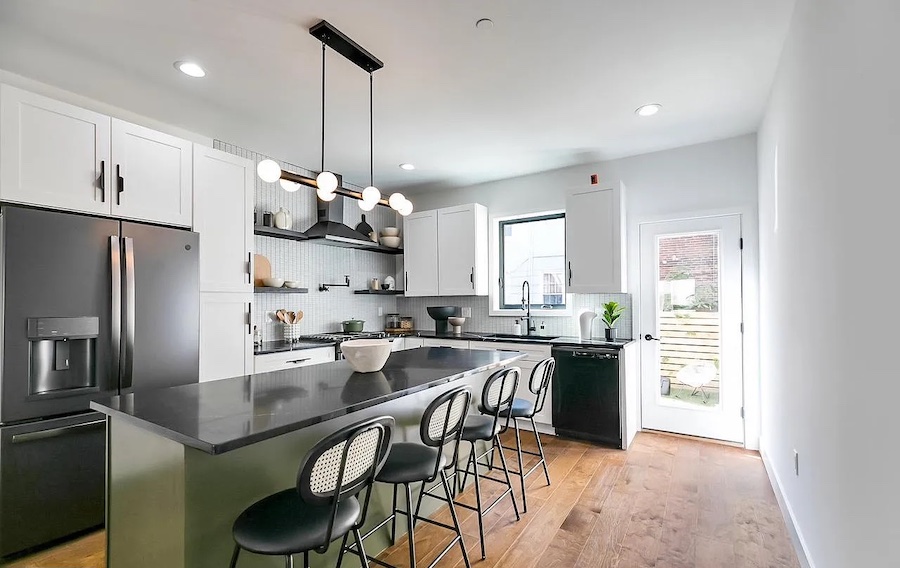 And in the kitchen, Shaker cabinets get contemporary door pulls next to open shelves mounted on batten board. 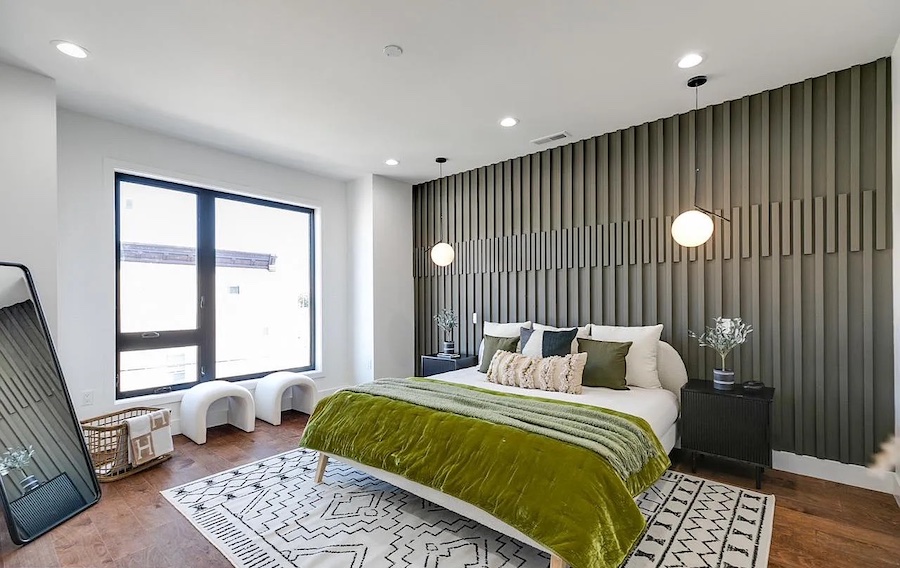 Upstairs, the third-floor primary bedroom features a hunter-green accent wall composed of alternating wood bands — one of a few notable splashes of color in this house where black and white dominate. 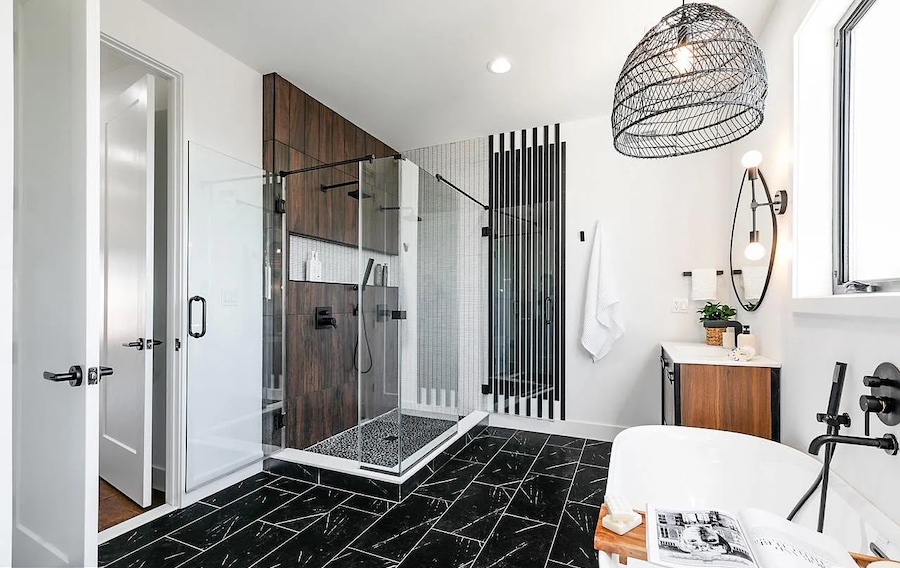 The rhythmic wood bands also appear in the primary bathroom, this time in black.

But even though traditionally modern lighting frames its dual vanities, Serrano chose to put a basket light fixture over the soaking tub for a bohemian touch. 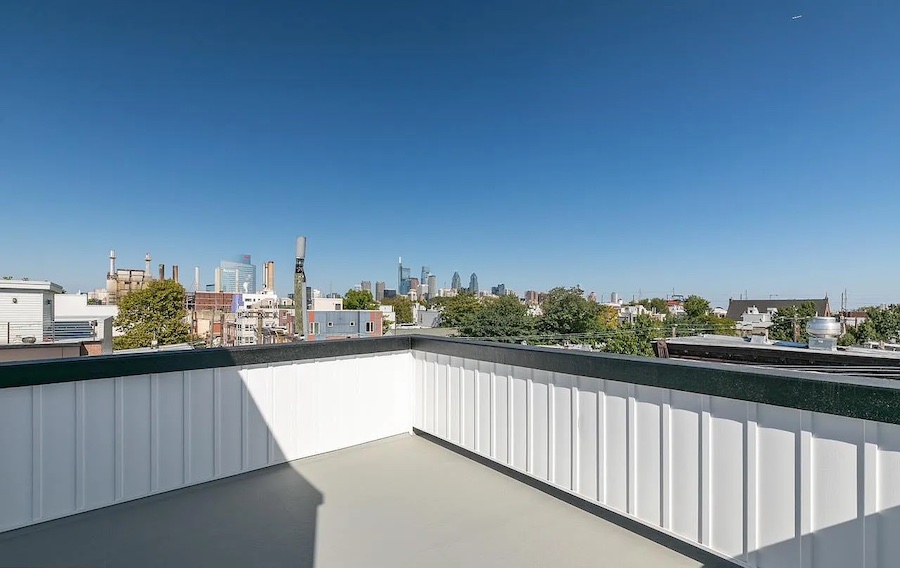 The primary suite also has a wet bar near the stairs leading to the roof deck, which offers a great view of Center City.

Something else Serrano paid attention to as the house was taking shape was making the rooms big enough and providing enough closets. Every bedroom is large enough to accommodate both a queen-size bed and a dresser, and, as noted above, the house has 10 closets, including a linen closet created by shrinking one bathroom and the laundry. “We’ve had issues in the past where people said that there’s not enough closet space and the bedrooms are too narrow,” she says. 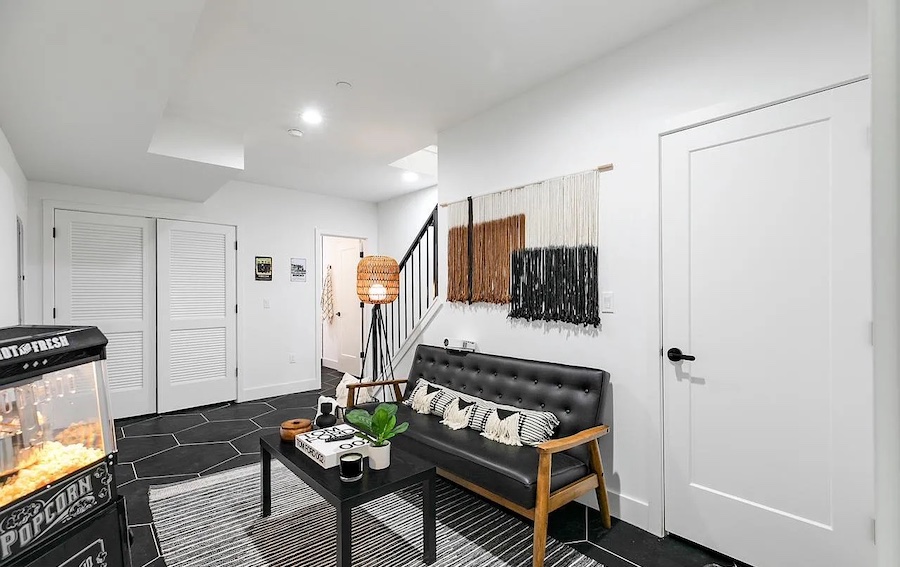 She also made sure the basement had a high enough ceiling to keep the rec room from feeling claustrophobic. 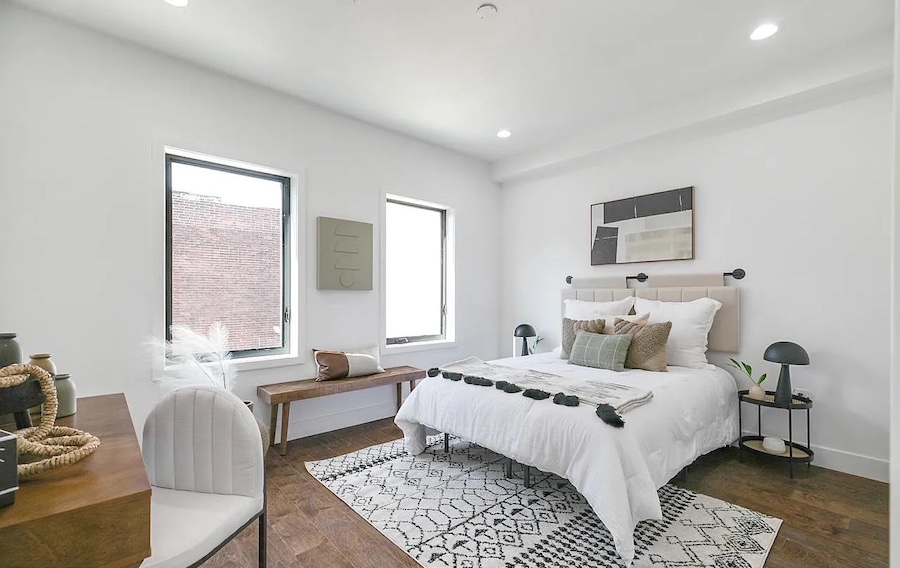 And a large enough light well to allow for good-sized windows in the basement bedroom.

“In this area, you won’t see something specifically like this,” Serrano says. “There’s lots of new construction in the area, but everything is pretty much builder’s grade, and we wanted to steer away from that.”

Which she did, but she also ranged widely in sourcing materials and fixtures for this house, which contains everything from bathroom mirrors from Amazon to faucets. cabinet door pulls and lighting from custom designers in Brooklyn. I’d characterize her approach to sourcing as “Economize where you can so you can splurge where you want to. Just make sure it all looks great.”

And, she says, people tell her that it does. “We’ve had people come up and say, ‘Oh my God, I saw the pictures online. I’m not even looking for a house, but I just had to see this house.’”

To tell the truth, that was the reaction I had when both Serrano and the builder called this Grays Ferry designer rowhouse for sale to my attention.