On the Market: Historic 18th-Century Farmstead in Newtown Square

The only things you can grow now at Echo Valley Farm are your family, your business, your circle of friends and vegetables in its garden plots. But isn’t that more than enough, given everything else this compound has? 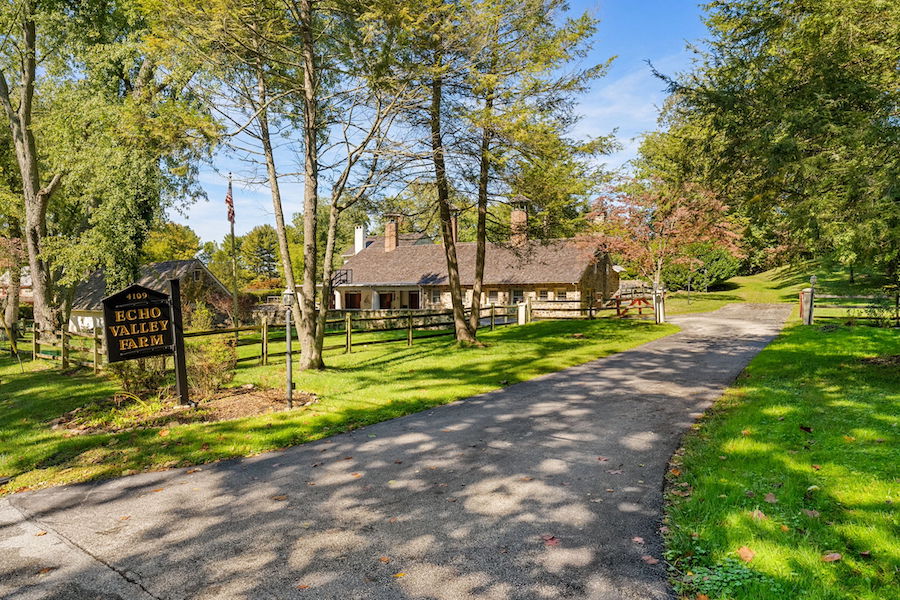 William Lewis’ 18th-century farm has been carved up in the centuries since and reduced to a few lots, including this 1.83-acre fragment at 4109 Goshen Rd., Newtown Square, PA 19072. But what a fragment it is! / Photography by Jacob Schroeder, Left Bank Cinema, via BHHS Fox & Roach Realtors

Every once in a while, a marvelously preserved specimen of early colonial Pennsylvania comes on the market in the city or its suburbs.

One of those once-in-a-whiles came along two months ago in Newtown Square.

This historic Newtown Square farmstead house for sale is known as Echo Valley Farm. But actually, this isn’t a farmhouse. The five-building complex that now goes by that name began life sometime around 1708 as the barns, granary, milk house and hay house of a much larger farm belonging to William Lewis, who also owned the springhouse across Goshen Road and much of the land to the west of this place. 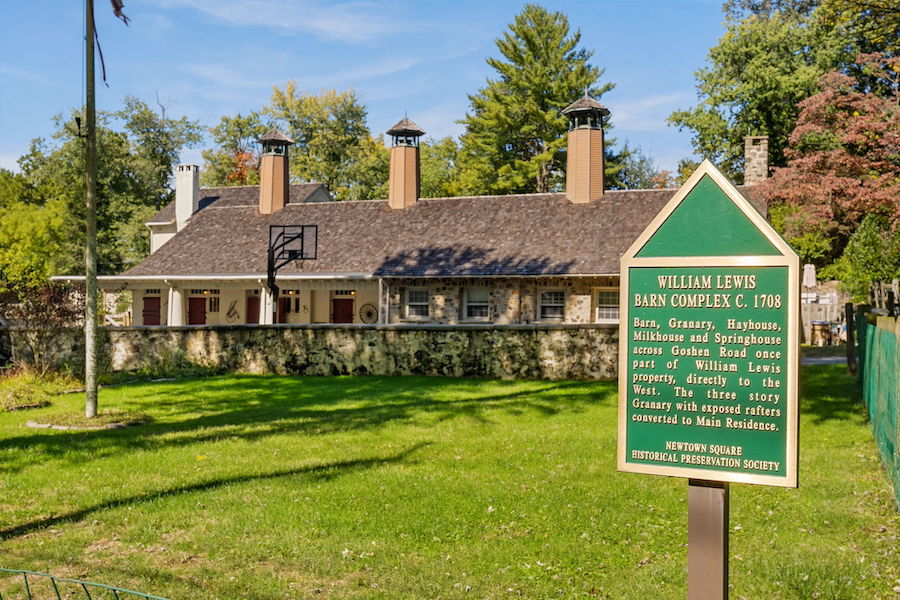 Historical marker on the property

A marker erected by the Newtown Square Historical Society in front of here informs passers-by of all this. Lewis’ farmhouse is now a separate property, next door at 4111 Goshen Road.

As most of the 1.83-acre plot on which these structures sit is now taken up by creature comforts, there’s not much farming you can do here anymore. There are garden plots on the property, off to one side of the flagstone patio in front of the main residence. 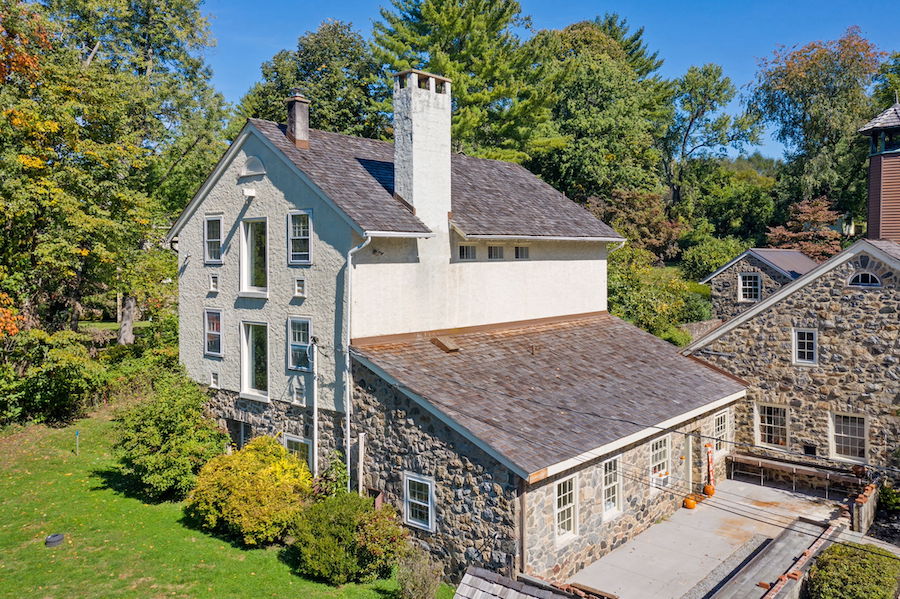 The main residence, which was originally the farm’s granary, is the tallest of the three interconnected structures that comprise the bulk of the compound. 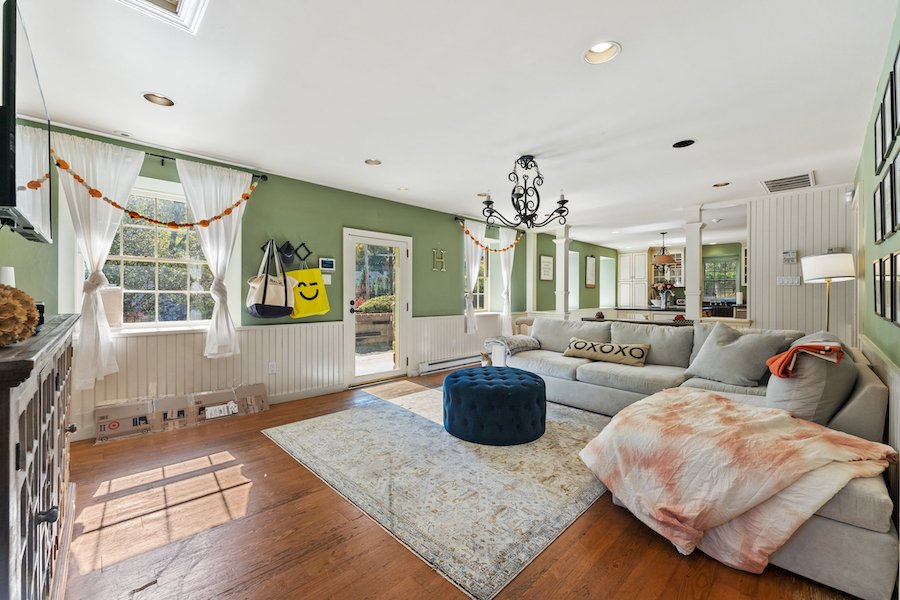 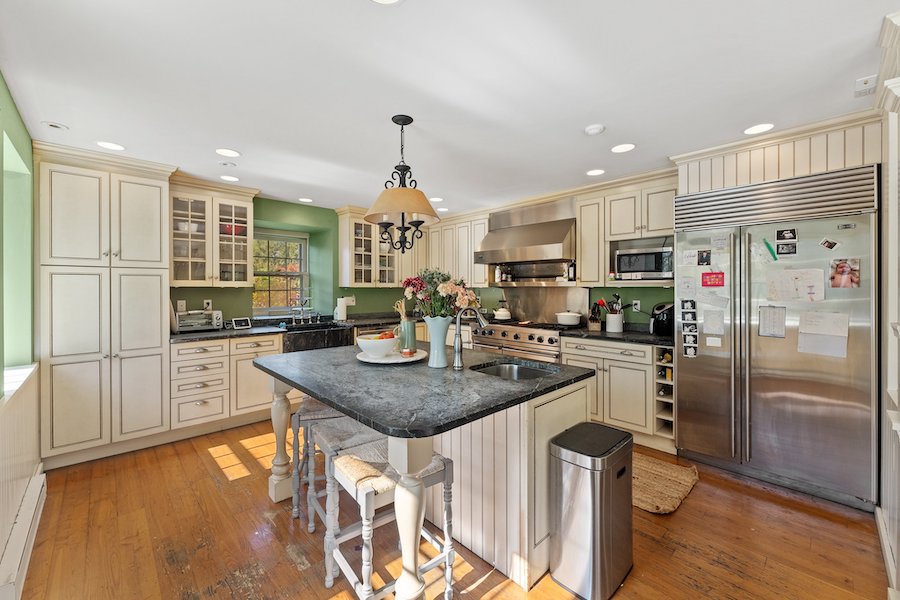 It also combines the living room and kitchen. The latter, recently updated, boasts soapstone counters, a farmhouse sink, plenty of storage space, top-drawer appliances and seating for two at its island.

A butler’s pantry large enough to serve another function, a laundry room and a half bath share this floor with the main living space. 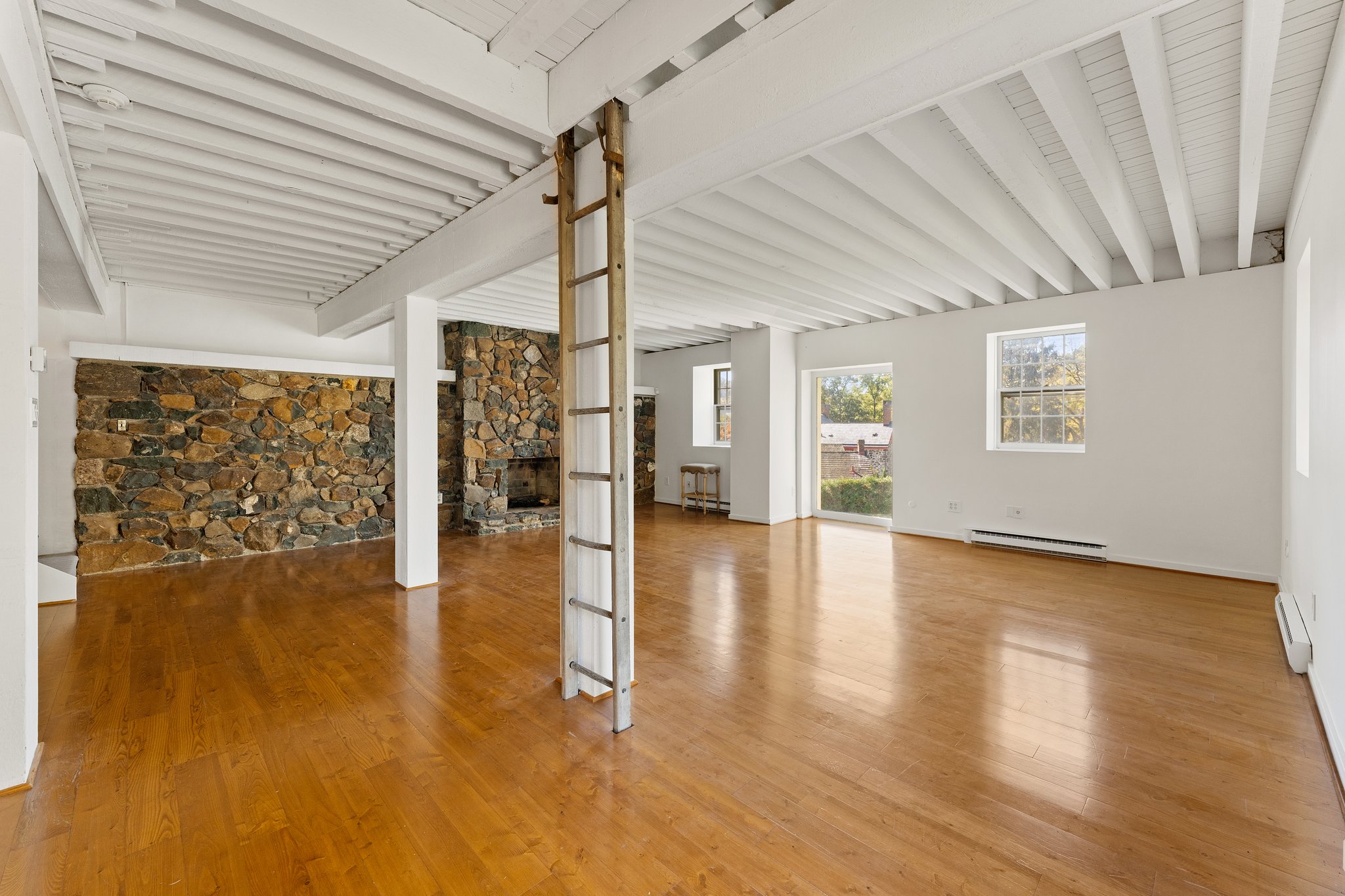 The second floor is a single open space with a wood-burning stone fireplace, one of two in this compound, at one end. The original ladder in it once led to a hayloft but no longer does. A door at the opposite end (behind the camera in this photo) opens onto a covered passageway leading to the backyard patio and pool. 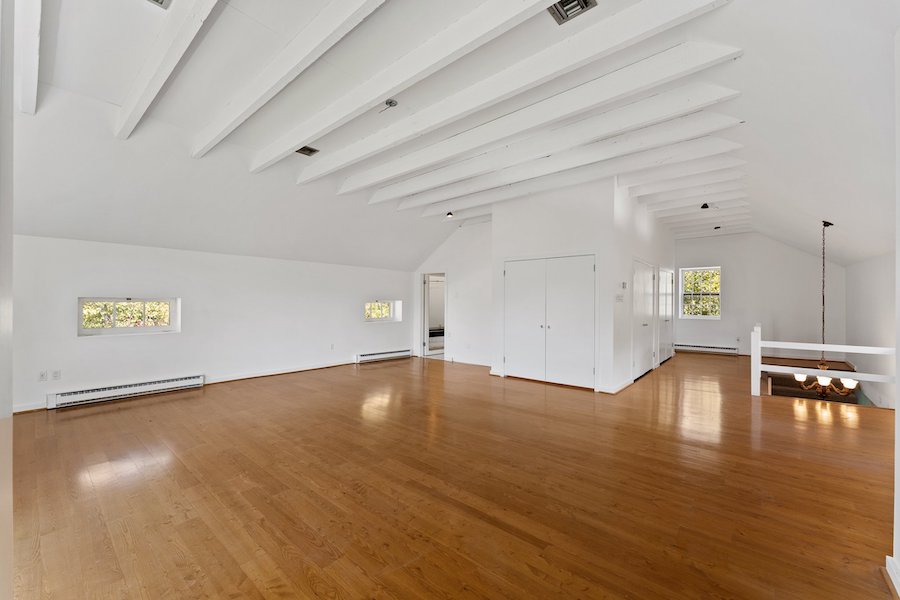 The hayloft got turned into a primary bedroom suite taking up the entire third floor. 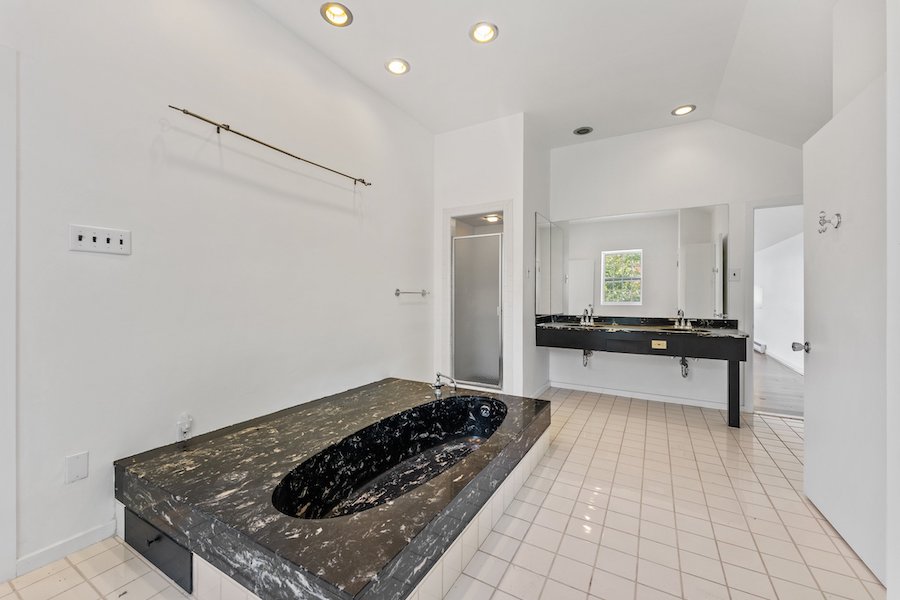 The primary bathroom has a more contemporary look with its black marble fixtures. 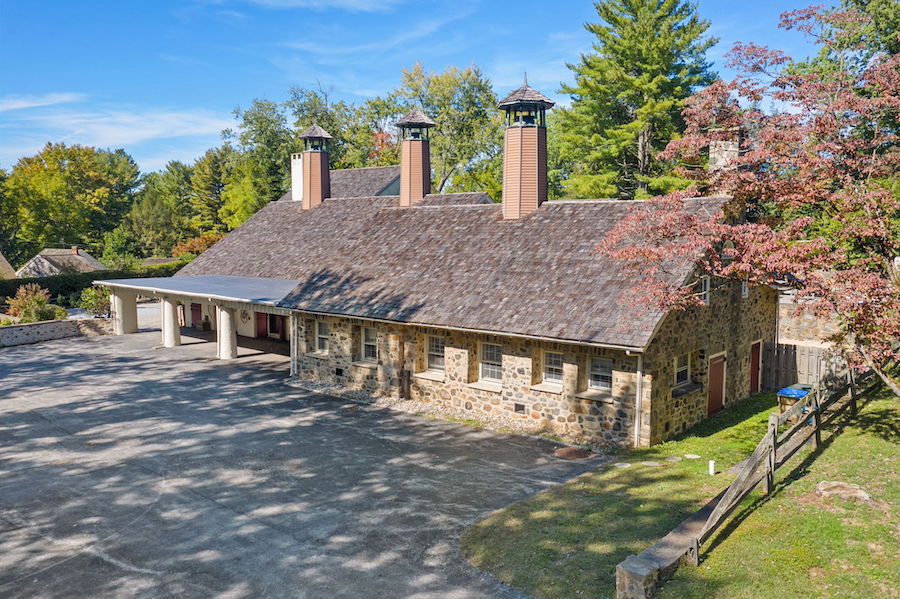 Next to the main residence are two attached barns. 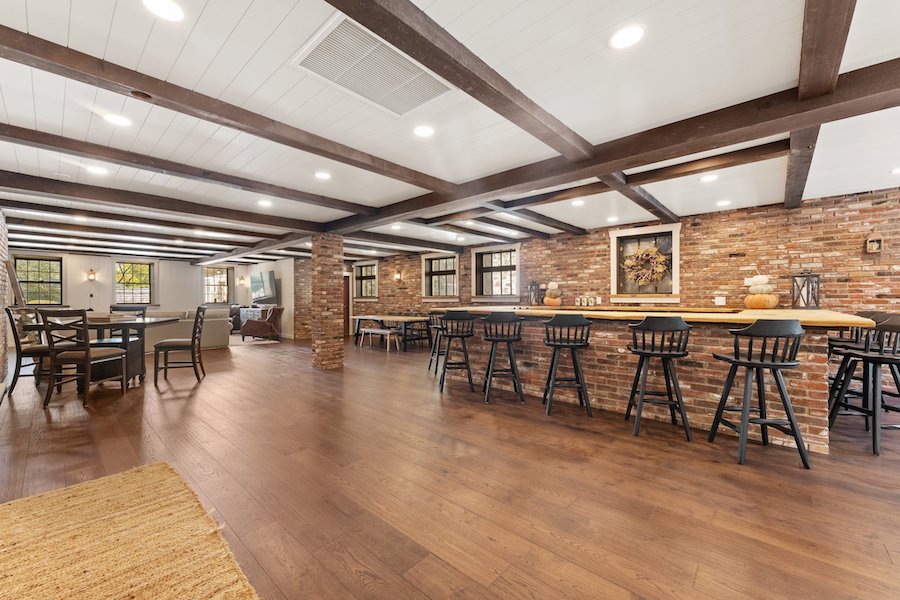 The barn with the wide portico in front has been transformed into an entertainment space without parallel, filled with character courtesy of its beamed ceiling and brick walls. 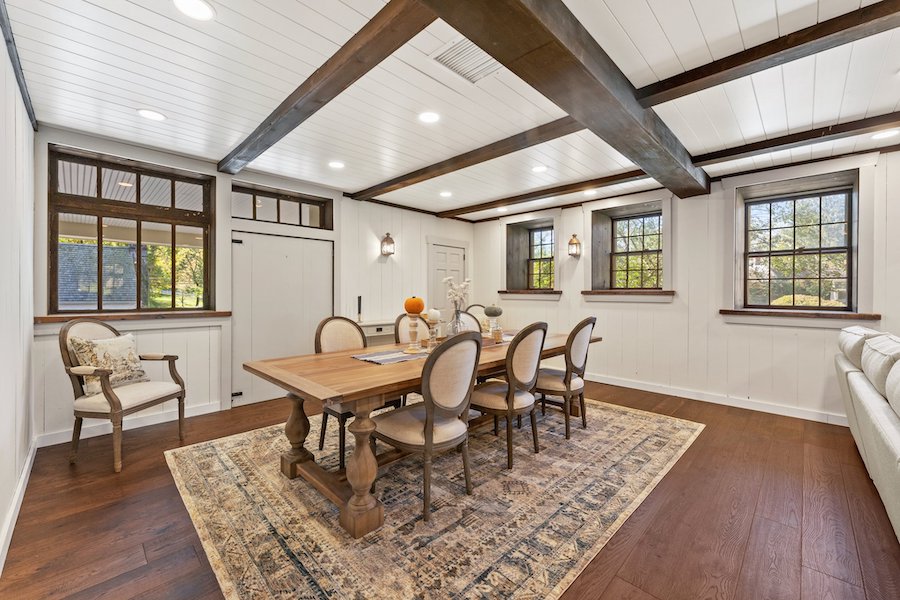 It also has a large bar, a media space and a dining area next to the media space.

What’s the dining room doing over here? I hear you ask. Making it easier for your guests to enjoy themselves before dinner, that’s what. And you don’t have to worry about carrying the dinner outside, for an interior passage connects this building with the main house. 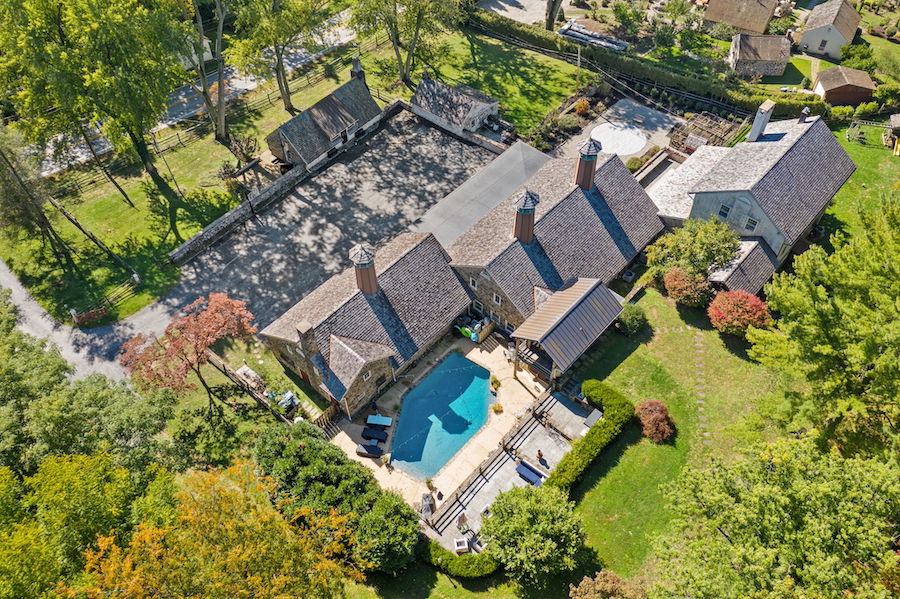 You will also find a powder room and changing rooms for you and your guests to use before or after a dip in the pool on this floor. The second floor of this barn is another open space that functions as a bedroom with a full bath.

The adjoining auxiliary barn’s first floor serves as an office and has a full bath. The second floor contains a one-bedroom apartment. 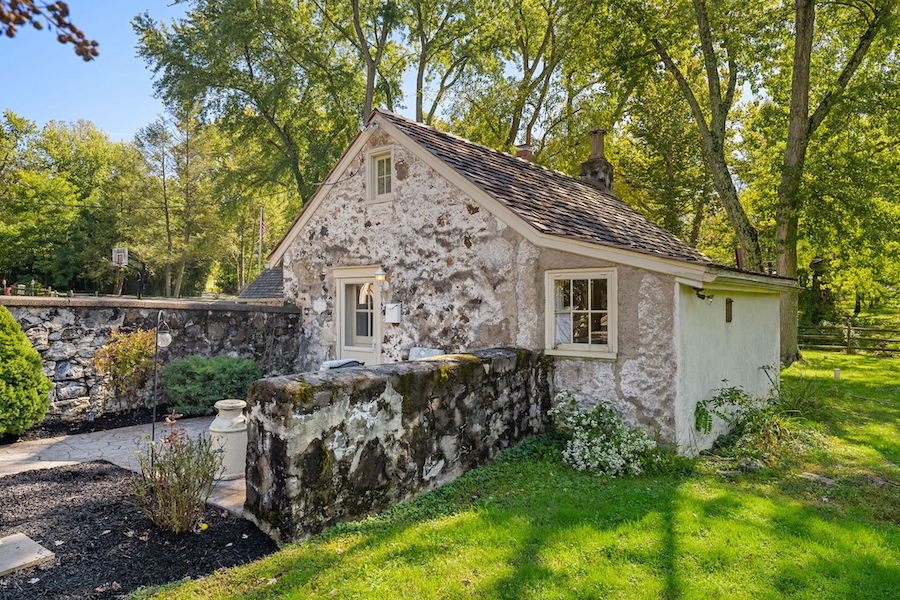 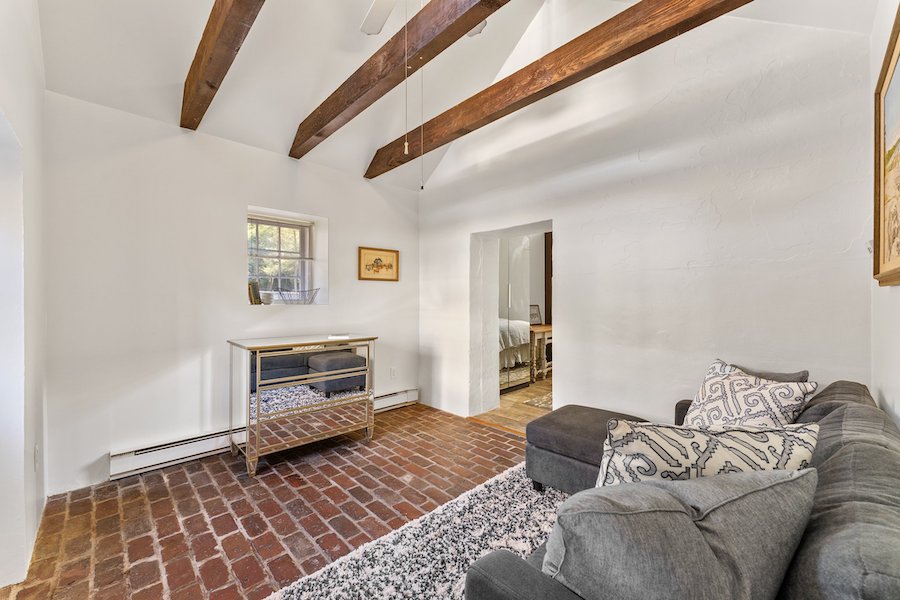 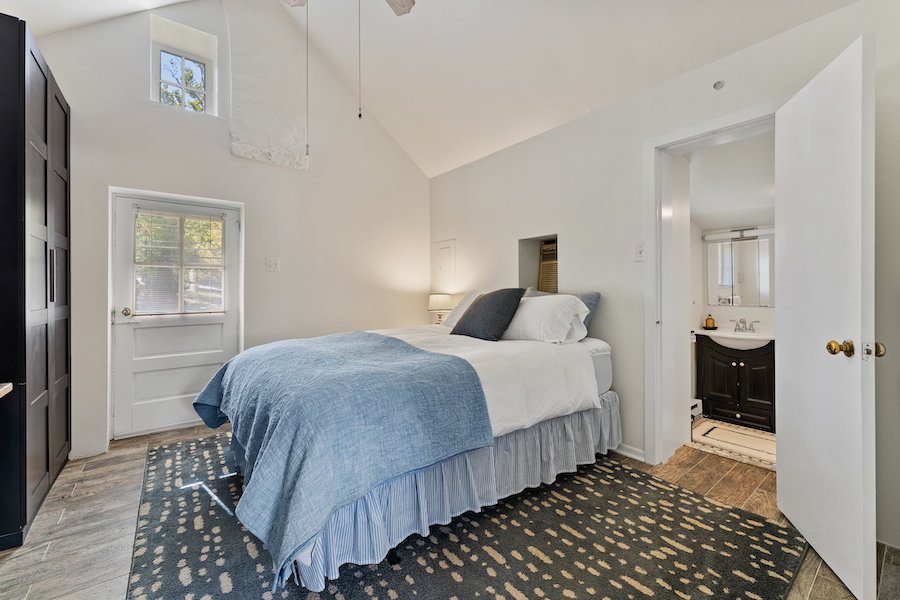 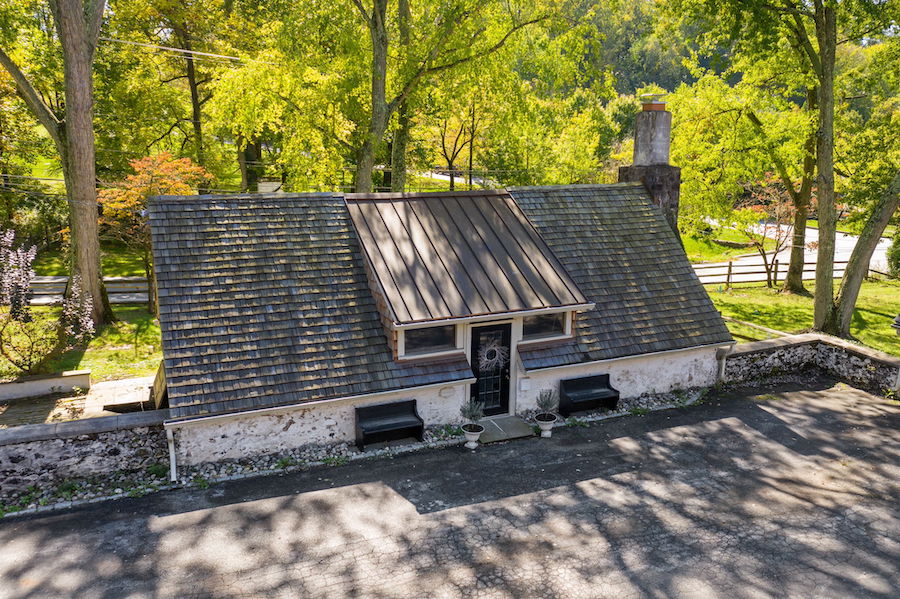 The hay house serves as the fourth one-bedroom apartment on this property. 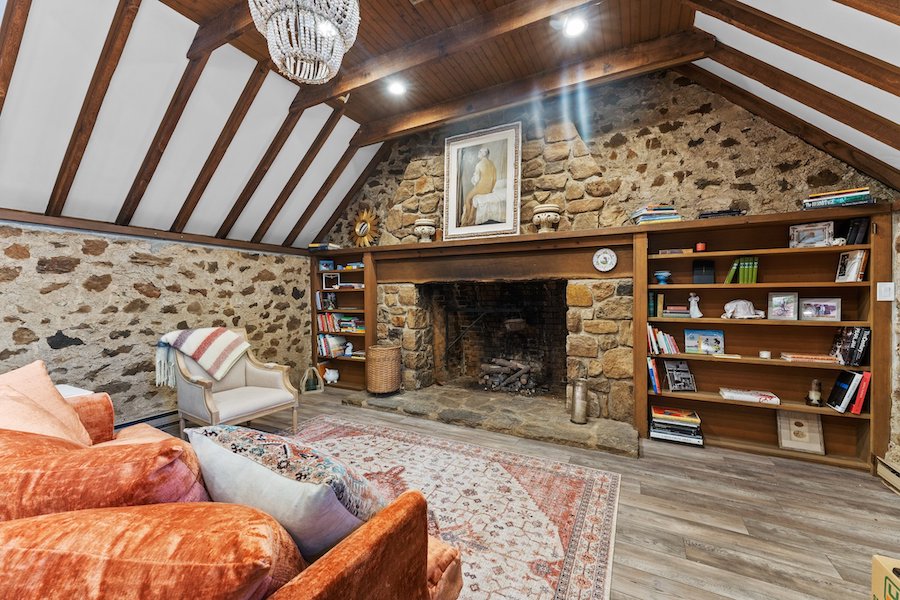 Its living room is a little grander than the milk house’s thanks to its Tudoresque beamed vaulted ceiling and stone-and-wood hearth fireplace, which has been converted to gas. 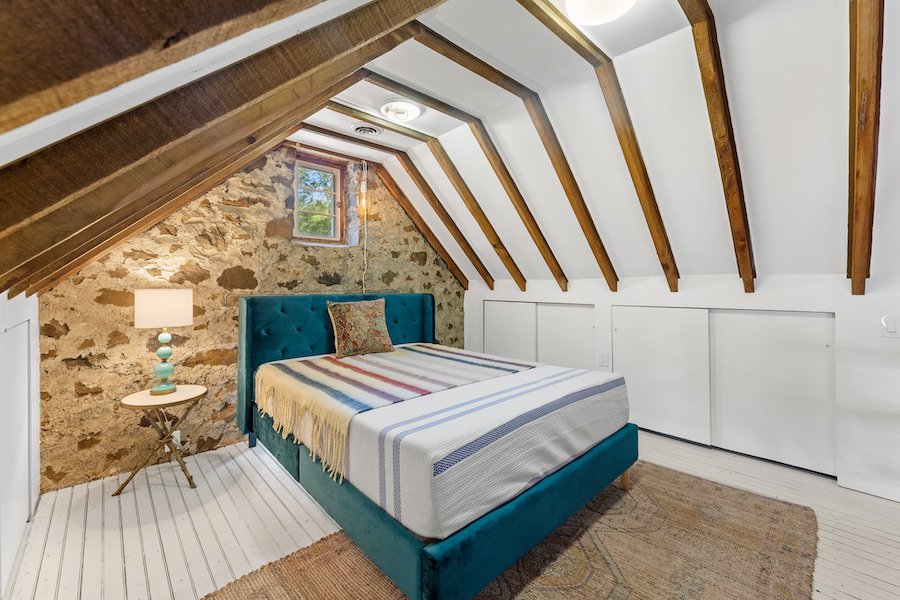 Its bedroom is similar in appearance, and its full bath and kitchen are in the middle of an upgrade.

So while your dreams of living the life of an 18th-century farmer may be stymied should you move into this very handsome Newtown Square farmstead house for sale, you have all kinds of opportunities for 21st-century fun and even enterprise.

OTHER STUFF: The owners researched plans to convert the main residence into a four-bedroom house with two or three bathrooms. They will include their work in the sale if you think you might like to pursue either that or a different reconfiguration of your own.

As this property sits in a zoning district with a Planned Residential Development overlay, it may be possible for you to earn a little income on the side by renting out those accessory apartments to tenants or as Airbnb-style guest quarters. Inquire with the listing agent and the township before you get any ideas, though.

If that’s not possible, well, you have plenty of places to put up your visiting relatives, friends and party guests. And the separation of the units and their location well back from the road ensures privacy for everyone.