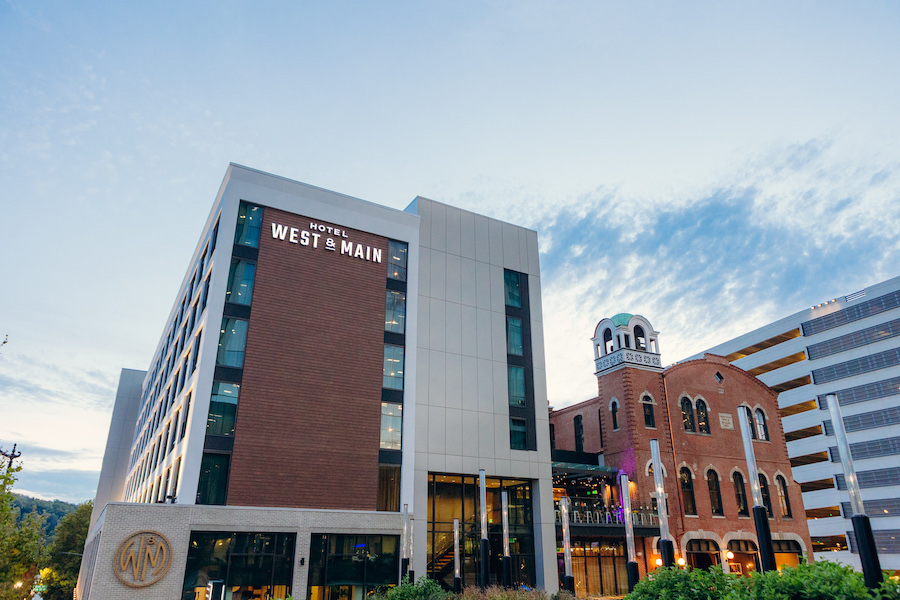 The new Hotel West & Main at Sora West in Conshohocken. Its centerpiece, the 1874 Washington Hose Company firehouse, is on the right. / This photo and all others not otherwise identified: Joe Mac Photography; photos marked with asterisks: Courtesy of Cashman & Associates

Does anyone out there remember when Conshohocken was a somewhat faded factory town best known for a tire factory that lent its name to an infamous curve across from it on the Schuylkill Expressway?

Then you probably also remember when the Blue Route was just a line on a map, or a short-stub freeway to nowhere. The completion of that freeway, which meets the Schuylkill in West Conshohocken, led to the two Conshys getting an edge city grafted onto them.

The old Lee Tire factory is still there, as are many of the other old factories lining the Schuylkill, but now, they all hold offices. Several all-new towers, one of them containing a Marriott hotel, arose to accompany them. And down by the Regional Rail station, a small city of apartment buildings now separates the tracks from the river.

Into this environment Keystone Development + Investment inserted a development that ups the ante for Conshohocken: SORA West. Occupying a plot bounded by Fayette, Elm, and Oak streets and First Avenue, this development transformed a clump of 1980s office buildings, a couple of parking lots and a vacant lot into a new ”town square” for the borough.

Surrounding the lawn at its center are:

That hotel, West & Main, opened its doors on October 13th. Part of the Tapestry Collection by Hilton, it’s the first new hotel to open in Conshohocken in 20 years. Keystone built it, Concord Hospitality runs it, the Chicago office of Omaha-based DLR Group architects designed the new hotel wing and Interior Image Group of Fort Lauderdale, Florida, did the interior design.

Hilton Worldwide has become the master of market segmentation, with 18 different hotel brands under its corporate umbrella ranging from Waldorf-Astoria at the very top to Hampton by Hilton in the budget-friendly category. The Tapestry Collection hotels sit a notch below the rarefied level of Waldorf-Astoria, LXR and the Curio Collection. But like the hotels in the Curio Collection, Tapestry Collection by Hilton hotels are independently owned properties that franchise the Hilton name.

“The idea behind the Tapestry Collection is that it allows the franchisee to be much more creative with the hotel’s design,” says Shaheerah Bay, director of sales and marketing for Concord Hospitality. “And take into account the history of where that hotel is located.” 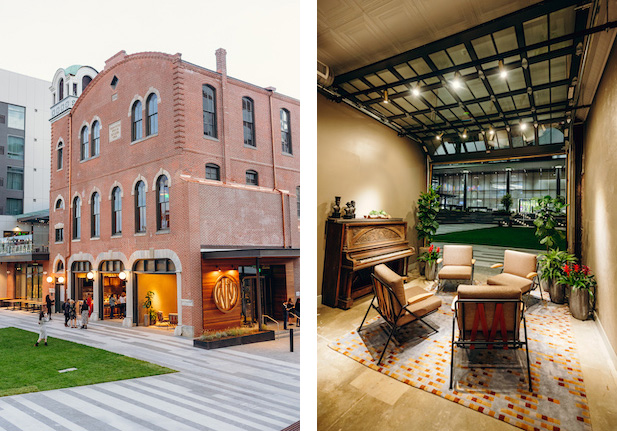 Left: The firehouse serves as the hotel’s front door and its connection to the Sora West town square via 1874 Social, behind the garage bay doors on the first floor; Right: The lounge at 1874 Social, next to the entrance. The piano is original to the firehouse.

This hotel has done that in spades. The Washington Hose Company firehouse is the anchor for all aspects of this hotel’s operation and decor. It contains the main entrance, the check-in/concierge desk and both of the hotel’s restaurants and bars.

Those recycled materials do not include the firehoses woven into a rattan pattern behind the check-in/concierge counters. Yes, they are reclaimed, but not from the Washington Hose Company. On the other hand, the cabinets and shelves behind the check-in desk are original to the firehouse.

As is the radio station booth next to the main entrance and the pole the firemen slid down from the upstairs sleeping quarters. You’ll find it in the upstairs restaurant next to the restrooms, marked with a neon sign reading “Shortcut.” You and the hotel management might get a laugh out of this, but the insurance company sure didn’t, which is why a plexiglass floor covers the hole surrounding the pole. “I think a lot of people would love it if they could” slide down it, says Bay. 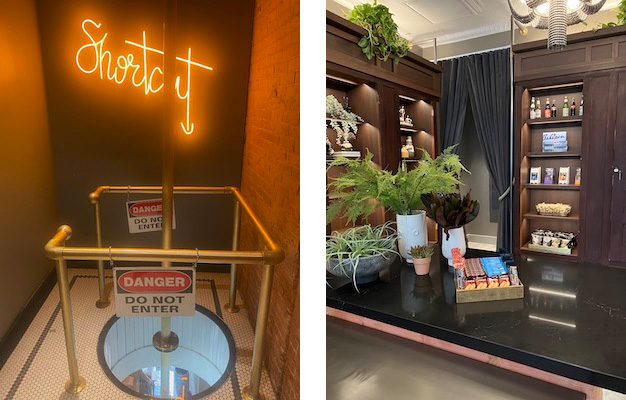 Left: The preserved original firehouse pole (photograph by Sandy Smith); Right: The storage lockers for the firehouse crew got recycled into grab-and-go cases by the concierge desk*

(They can, however, climb the original stairs in the firehouse tower, which are open to the public but hidden behind doors on each floor.)

Both of the restaurants and bars — the casual 1874 Social downstairs and the tonier Hook & Ladder upstairs — also incorporate original materials and design elements from the firehouse.

“You will also see hints of tires and steel, because Conshohocken was also the home of Lee Tires, and we had steelworkers in Conshohocken,” Bay continues.

Photographs throughout the hotel’s corridors show the Washington Hose Company in years past, participating in parades and showing off its engines in front of the firehouse, among other historical images of Conshohocken.

Another nod to the hotel’s history are the dog sculptures by the main entrance and elsewhere in the hotel. 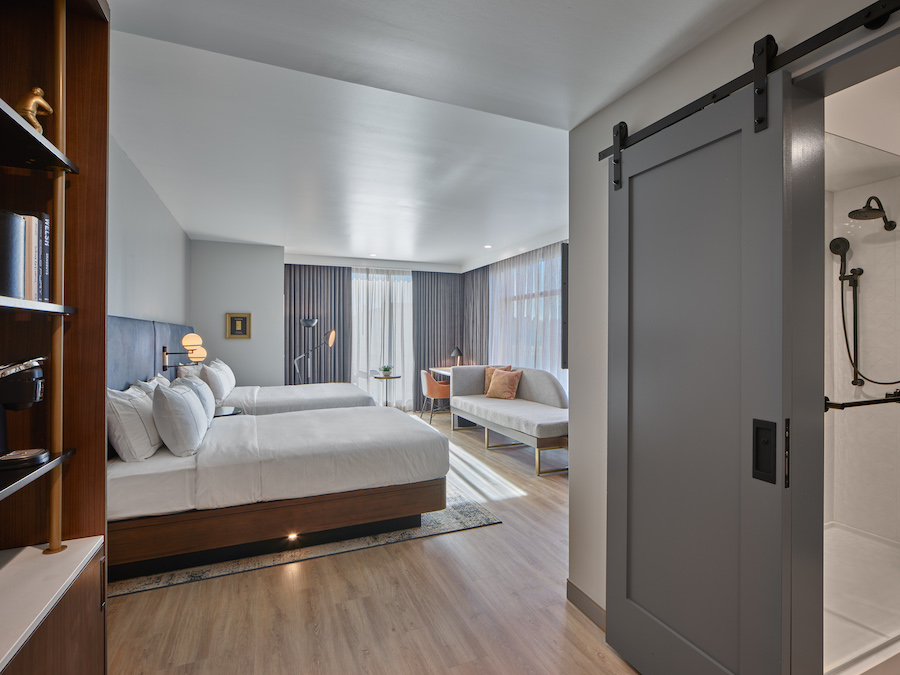 The rooms themselves are functional and modern in style but with some rustic touches like the sliding barn doors leading to the bathrooms. 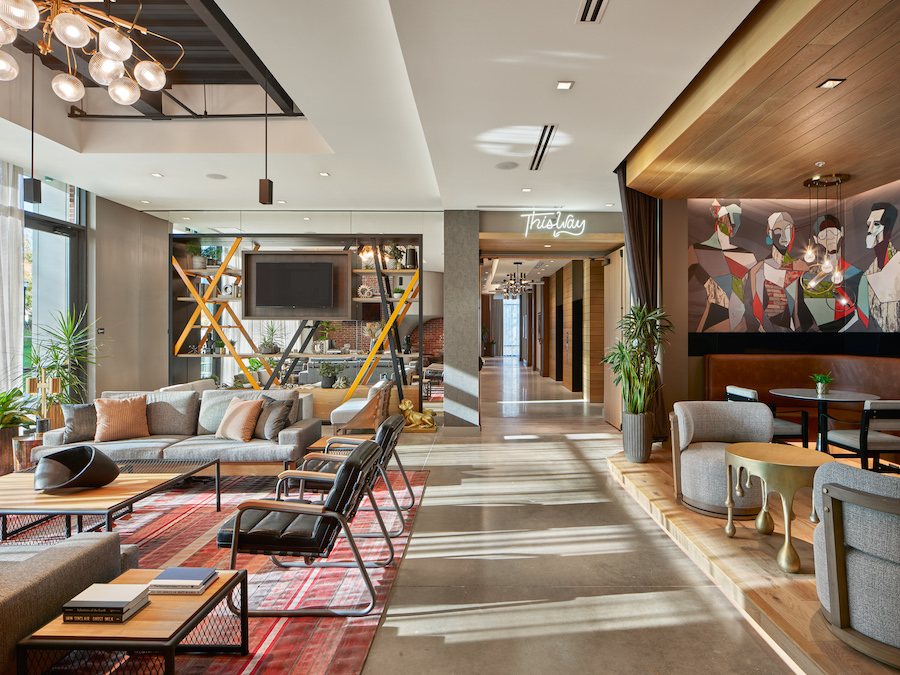 DLR and IIG did a great job of seamlessly tying together the historic firehouse and the new hotel building with a contemporary design that at the same time lets the historic materials shine.

That mix of old and modern comes to the fore in the hotel’s two restaurants and bars, both of which offer indoor and outdoor spaces. 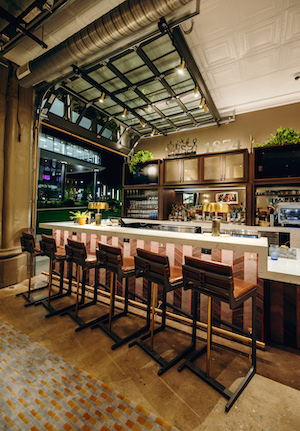 1874 Social does this by sitting in one of the firehouse’s garage bays.

Hook & Ladder does this in its bar, which is open to both the inside lounge and the second-floor outdoor terrace. Breakfast is served downstairs; the upstairs menu features more haute cuisine while 1874 Social offers more casual fare. 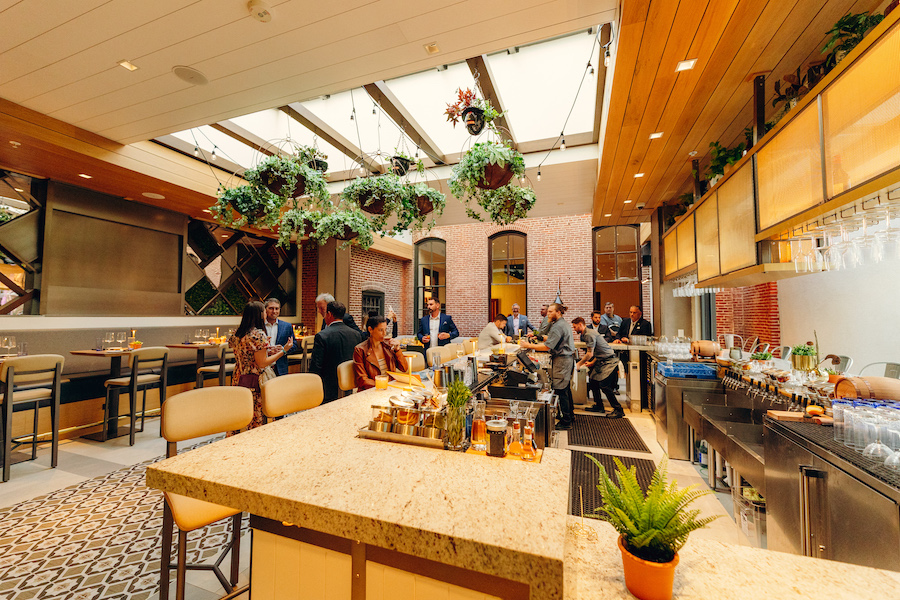 Hook & Ladder’s surf-and-turf steakhouse menu features an item that should get as many tongues wagging as Barclay Prime’s $140 cheesesteak did: A $99 burger featuring a blend of American Wagyu and Japanese Kobe beef wrapped in gold leaf and topped with lobster tail, a three-year aged cheddar-bechamel sauce, arugula, truffle aioli and an enormous onion ring, with fresh shaved truffle added tableside.

There’s also a 42-ounce tomahawk steak that’s dry-aged for 32 days ($210) and a Wagyu ribeye steak ($105) for those with a taste for top-drawer beef and either the money or the expense account to cover the bill. For those less flush, however, there are much less stratospherically priced items on the menu. 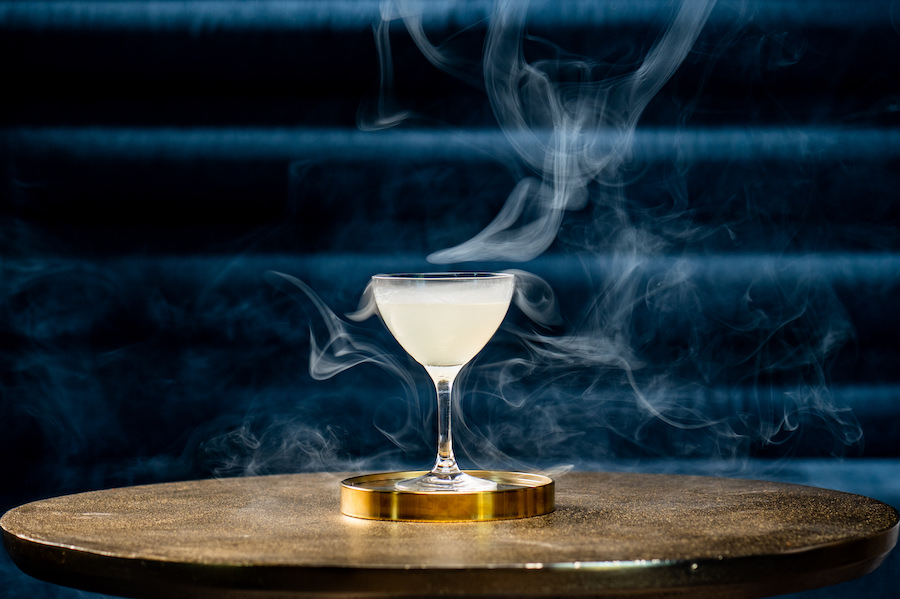 Burger lovers will more likely order 1874 Social’s Conshy Burger, for a mere $14.  The downstairs menu favors sea over land, though both are represented, and is reasonably priced for an upscale pub. Its eye-catcher is its Social Butterfly cocktail ($16), a citrusy gin sour with a touch of sweet vermouth, served under a smoke-filled glass dome. 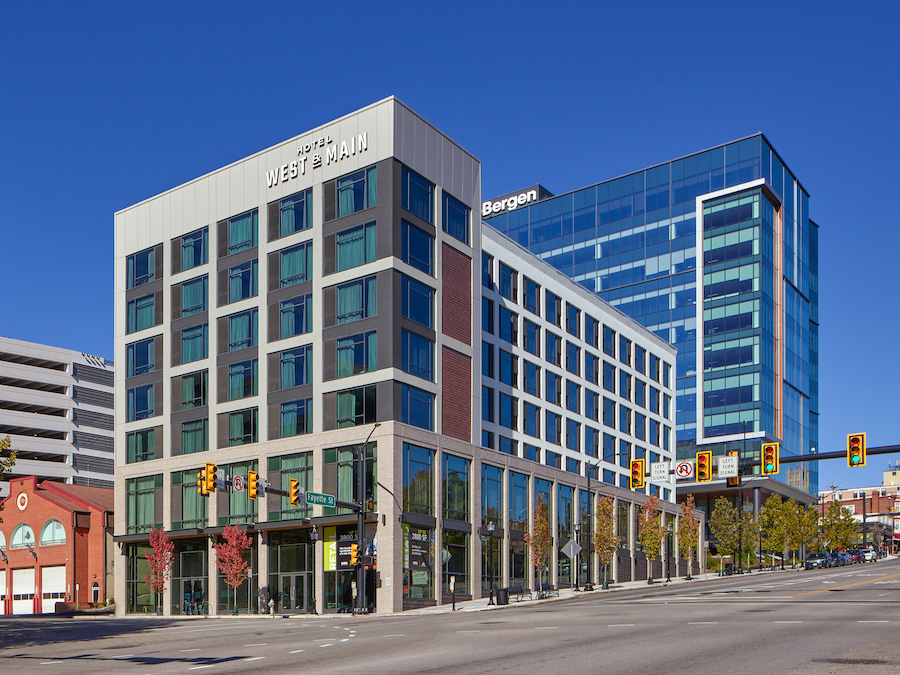 Another restaurant is slated to occupy the basement-level commercial space at the hotel’s Fayette and Elm streets corner. The current Washington Hose Company firehouse is visible at left

All of this is pretty swell for Conshohocken. Is the town ready for it? Judging from how busy Hook & Ladder was on the Tuesday night my dining companion and I visited it as guests of the hotel, it’s more than ready. Besides, travelers doing business with AmerisourceBergen will find this an extremely convenient and comfortable place to stay or have a business lunch — and Gladwynites looking for something other than the Guard House need only drive a mile or two up the road and across the river.

Hotel West & Main by the Numbers