Just Listed at the Shore: Mission Mini-Manse in Margate

This custom-designed house has a Spanish heart, but it picked up a design cue from Wildwood along the way. 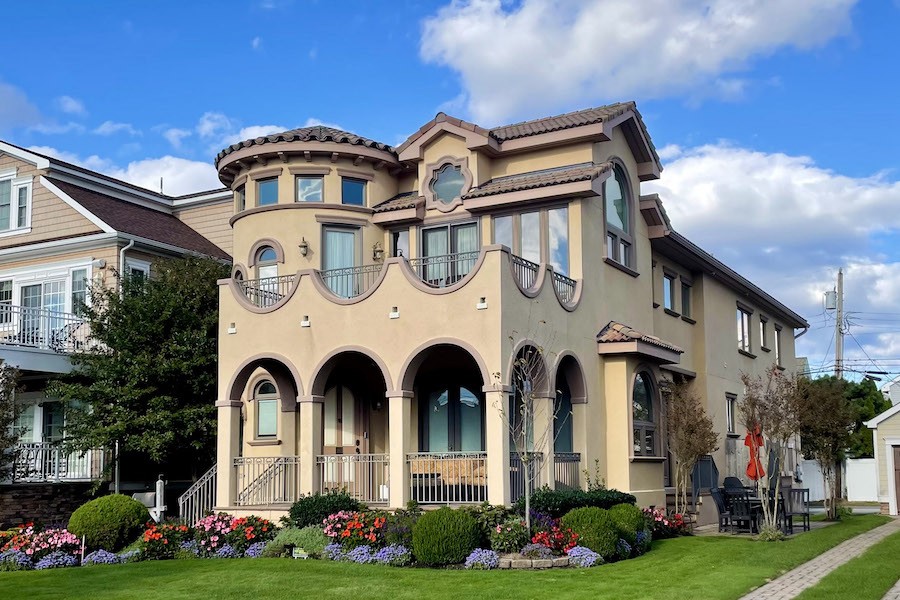 One part Mission Revival, one part contemporary, and one part Doo-Wop, this mélange just one block from the beach in Margate packs a lot onto its compact site. | Photos: Kyle Kotacska via BHHS Fox & Roach Realtors

As its growing legion of fans know, the epicenter of the mid-century modern architectural style variously known as “Doo-Wop,” “Populuxe” or “Googie” up this way is the island just north of Cape May that contains the Wildwoods. Wildwood Crest especially ranks with Miami Beach and Los Angeles as one of the leading places where this futuristic, celebratory style has been best expressed and preserved.

Jim Christaldi & Son Builders, Inc., the Longport-based firm that produced this mansionette in Margate, usually works in the traditional Jersey Shore vernacular. Colonials, Dutch Colonials and informal Shingle Style houses make up the bulk of the houses the firm has built. But it also has designed and built houses that draw on Spanish and Tuscan designs, like this one.

But what makes this Margate Mission contemporary house for sale truly unique is that Christaldi added a dash of Doo-Wop to the design.

Perhaps this came at the urging of the notable media celebrity for whom Christaldi built the house in 2006. But whatever its source, it provides an element of whimsy — a little Disneyfication, if you will — to this contemporary take on traditional Mission Revival architecture.

It should be clear from the photo above where the designers tossed in the Doo-Wop element. It’s right there, on the front porch and balcony. 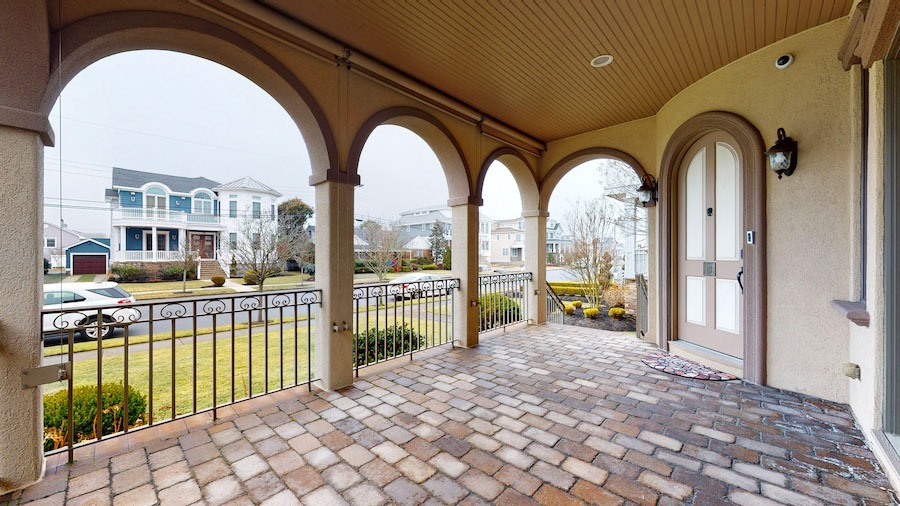 Since this structure combines both the main-floor front porch and the deck off the primary bedroom, it reads differently from above and below. The arches below make the covered front porch purely traditional.

Most of what’s inside also channels the past. But it does so in a very modern way. 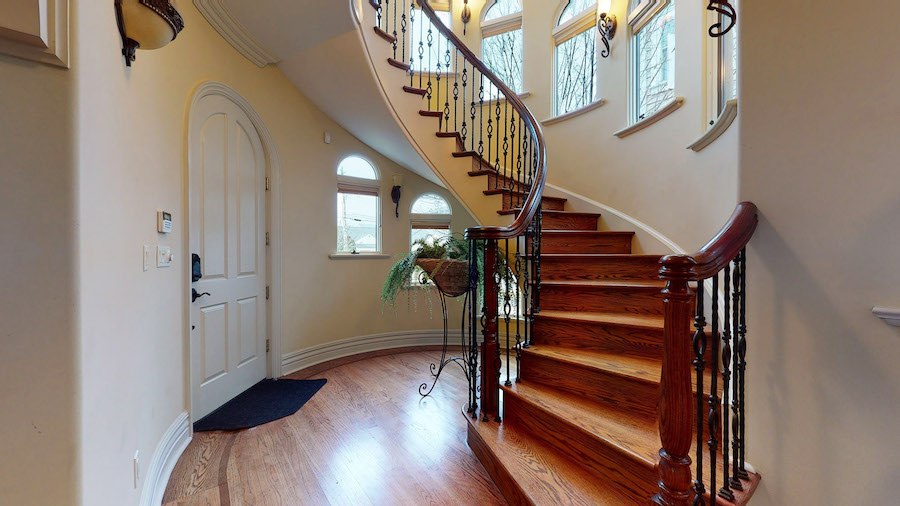 The front door leads to a foyer in the turret. A helical staircase leads to the second floor. The windows in the turret clerestory let natural light fill and animate this space. 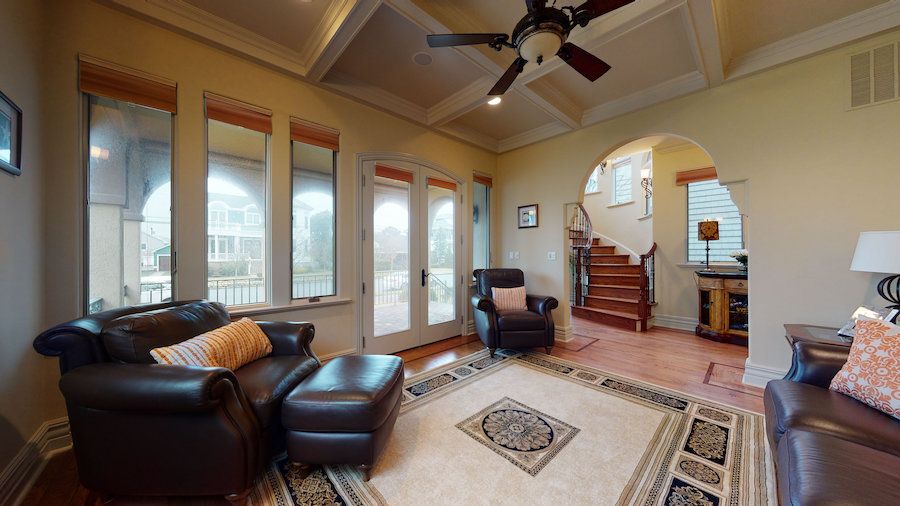 Off the foyer lies the living room, which has French doors leading to the porch. Its coffered ceiling gives it an air of formality.

It also makes it the most formal of the spaces in this house. Most of the rest of them have more of a loose, contemporary spirit about them even if they have traditional detailing. 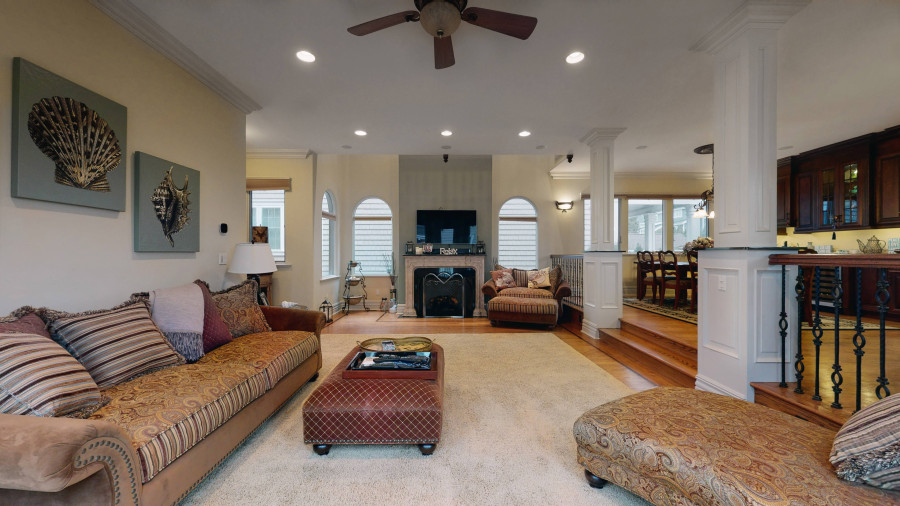 For instance, you will find crown moldings, columns with indented panels, and classic balcony railings in the adjacent family room. You will also find a more modern fireplace that rises the full two-story height of the house via a light well. 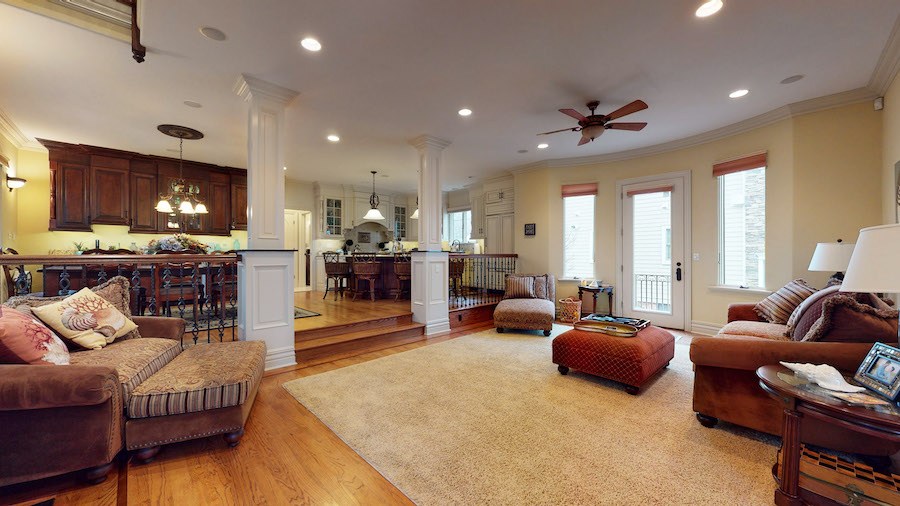 French doors at the other end of the family room lead to a side patio. 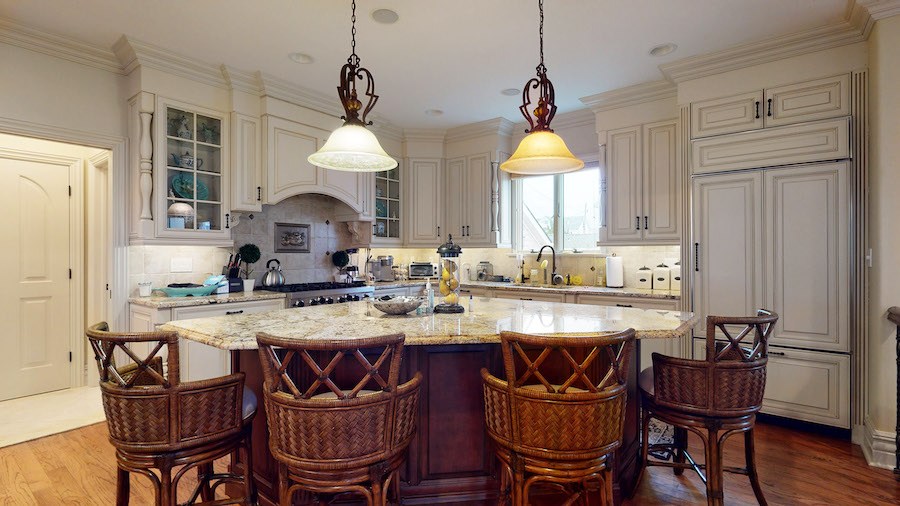 The raised rear of the main floor holds an open space combining the kitchen and dining room. The kitchen, of course, has modern appliances and an island with bar seating, but its design cues come from a more elegant past. 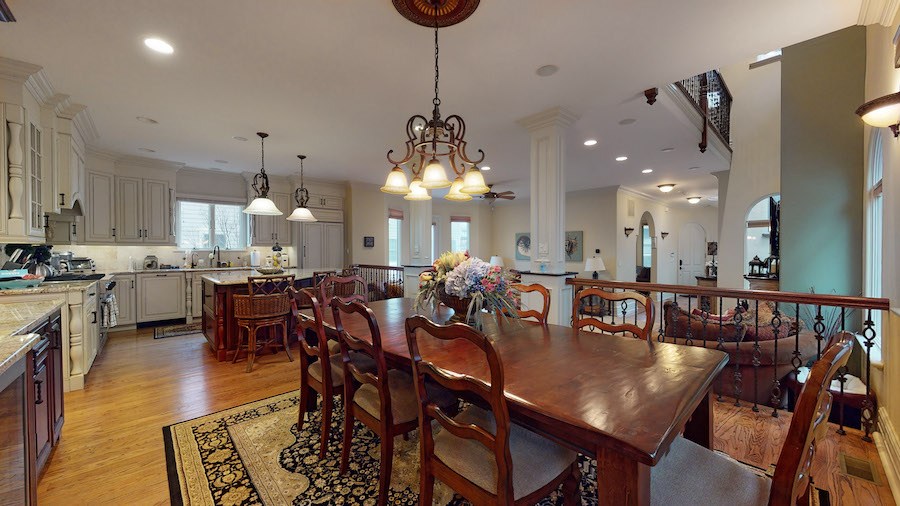 Ditto the dining room, which includes a bar with a wine fridge and a mini-fridge. Behind these two rooms, a hallway leads to a full bath, one of two laundry rooms and a two-car garage with an electric vehicle charging station. And, of course, the house has an outside shower. 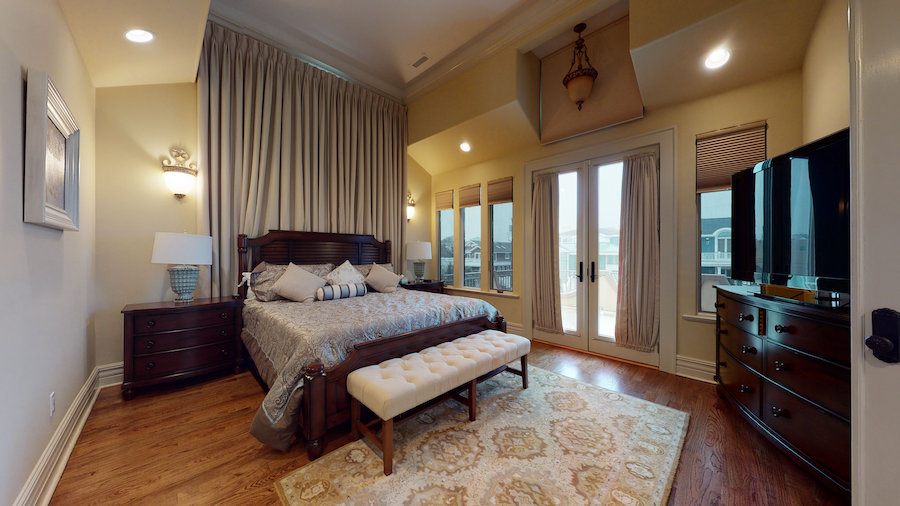 All five bedrooms are on the second floor. The primary one is in front, at the top of the stairs.  Note its lack of crown moldings and its distinctive vaulted clerestory ceiling.

The deck next to it can be accessed by French doors from the primary bedroom and by a door from the stair tower, which allows your guests to enjoy the view of the ocean from it without having to go through the bedroom. 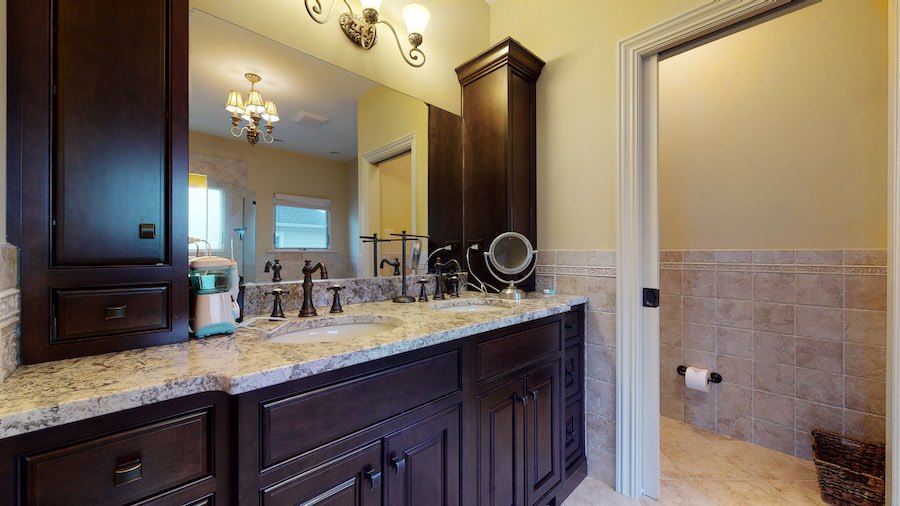 On the other side of the bedroom, you will find its large walk-in closet and this luxuriously outfitted bathroom. 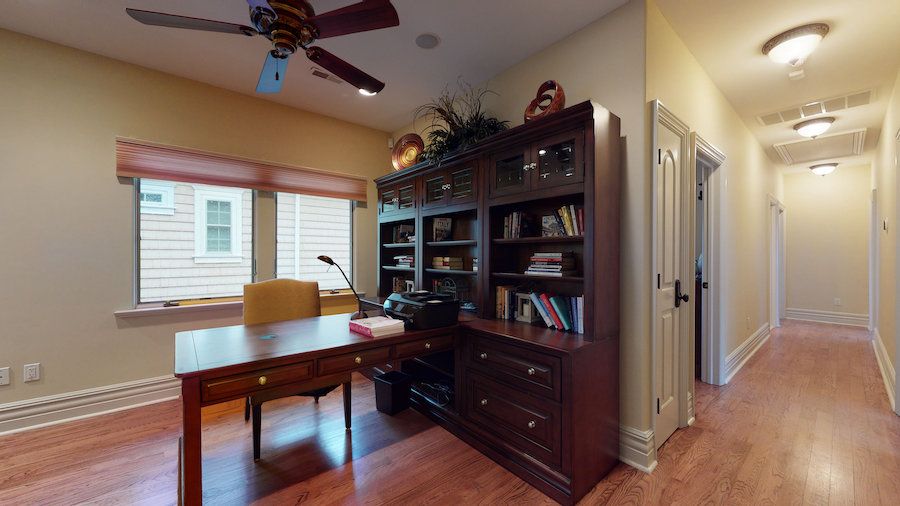 An alcove that functions as a home office lies between the stair tower and the corridor leading to the other four bedrooms. The bedrooms are also more simple in their appearance than the main-floor rooms, mainly because of the lack of crown moldings. Two of the bedrooms share a Jack and Jill bath. The other bathroom has a pocket door connecting it to the third bedroom and a door opening to the hall for access from the fourth.

This mix of Old California dignity and Wildwood sparkle sits in a very convenient location, just a block or so from the beach and a few blocks away from Lucy the Elephant. It’s also close to the restaurants and boutiques that line Ventnor Avenue in this part of Margate.

So if you’re one of those un-buttoned-down traditionalists with an appreciation of mid-century modern style, then you should appreciate everything that went into this Margate Mission contemporary house for sale. Including that dash of Doo-Wop.