On the Market: Horace Trumbauer Queen Anne in Wyncote

This handsome home anticipated modern living with its open, flexible spaces and extra-large bedrooms, including a primary suite that's almost an apartment in itself. 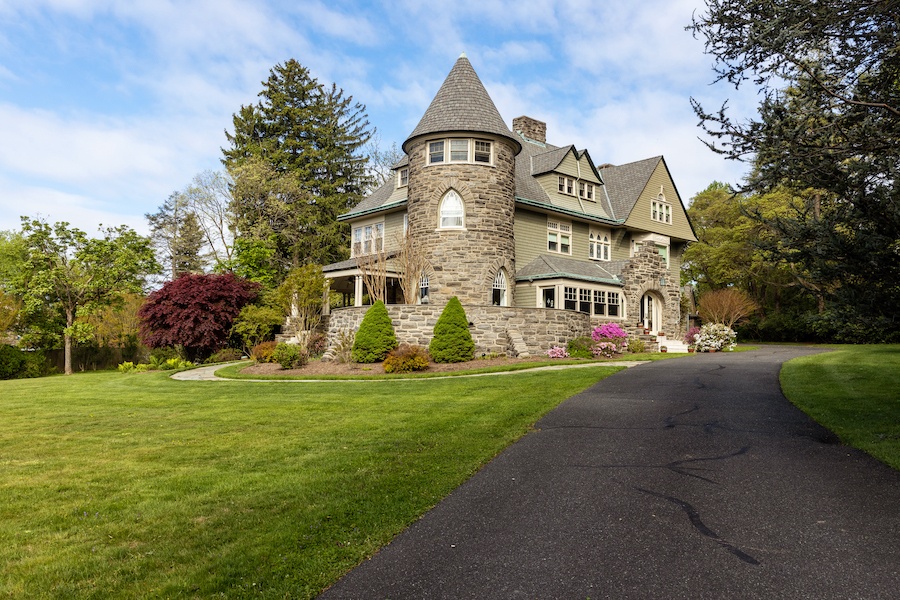 There are both more exuberant examples of the Queen Anne style and more exuberant examples of Horace Trumbauer houses abroad in our region, but this expansive Trumbauer-designed house at 343 Bent Rd., Wyncote, PA 19095 is exuberant enough — and its design anticipated 21st-century living more than a century beforehand. | Exterior photos: Betsy Barron Photography; interior photos: Shaun May Photography; all photos via Compass Real Estate

Horace Trumbauer ranks among Philadelphia’s greatest architects, and his firm — managed for many years and run after his death in 1938 by his equally notable chief designer, Julian Abele — produced many prominent public and academic buildings up and down the East Coast from Massachusetts to North Carolina.

But Trumbauer made his reputation with his domestic architecture. His contemporaries looked down upon the ornate houses he designed for Gilded Age grandees, some of which you’ve seen in this department (like this one, this one, and this one). Today, Trumbauer’s houses are as prized as his public, commercial, educational and medical commissions, many of those much better known.

Trumbauer designed this Wyncote Queen Anne house for sale in 1892 for a gentleman named William A. Cochran. As Trumbauer houses go, this one is relatively restrained in its decor. Yet it still has plenty of very lovely details. And in several ways, it foreshadows modern house design.

Its exterior is quite exuberant, full of Gothic windows, gables and a large turret at its front corner. Two distinct front entrances flank that turret. 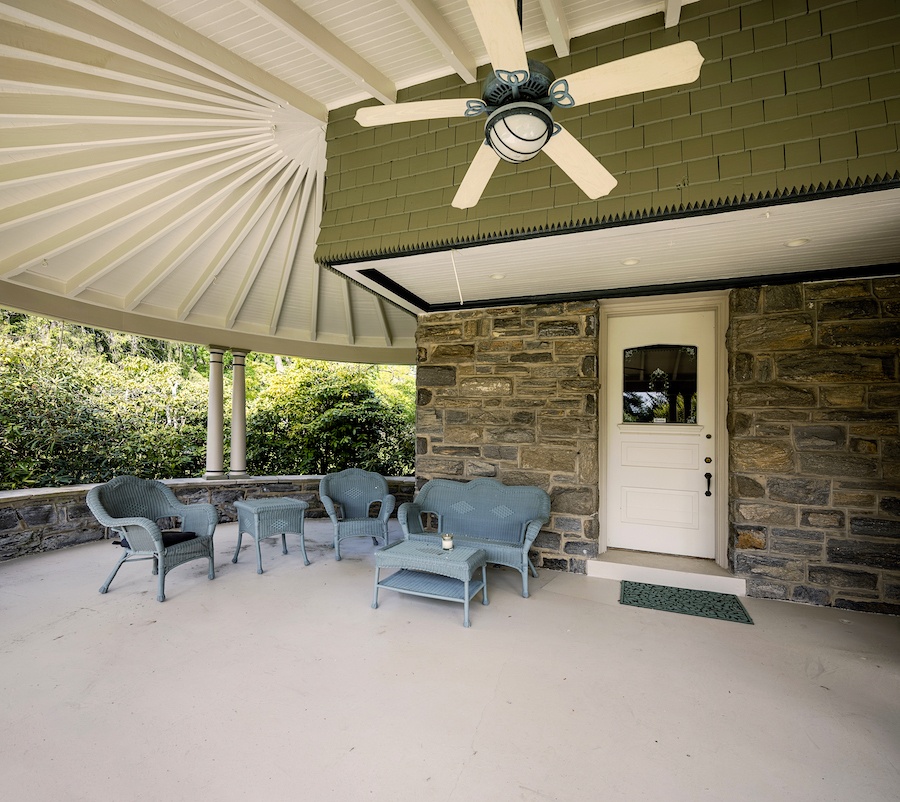 One is a modest door in its wraparound front porch. 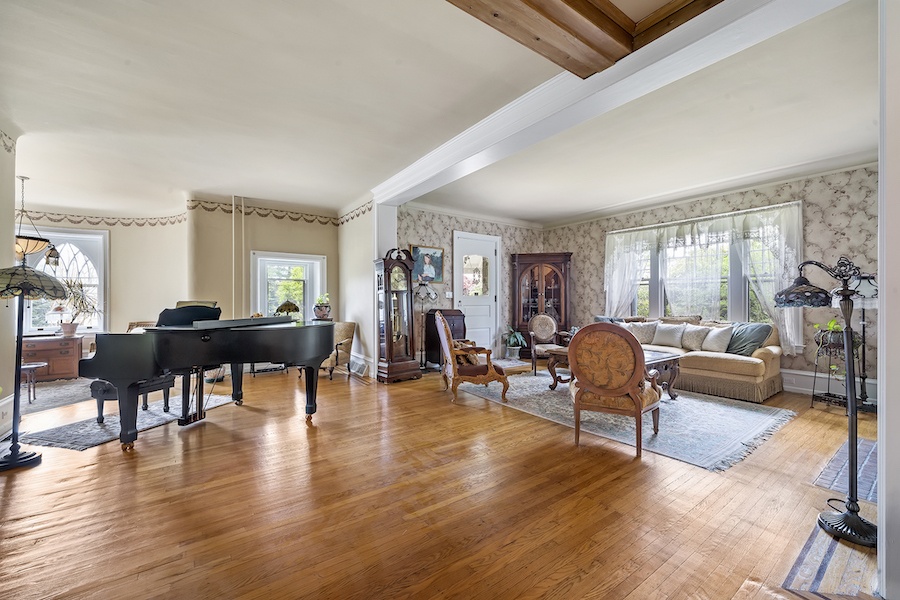 Pass through that door, however, and you enter one of those forward-thinking spaces: a large open space that, as configured now, combines a music room with a sitting area in the turret and a living room. 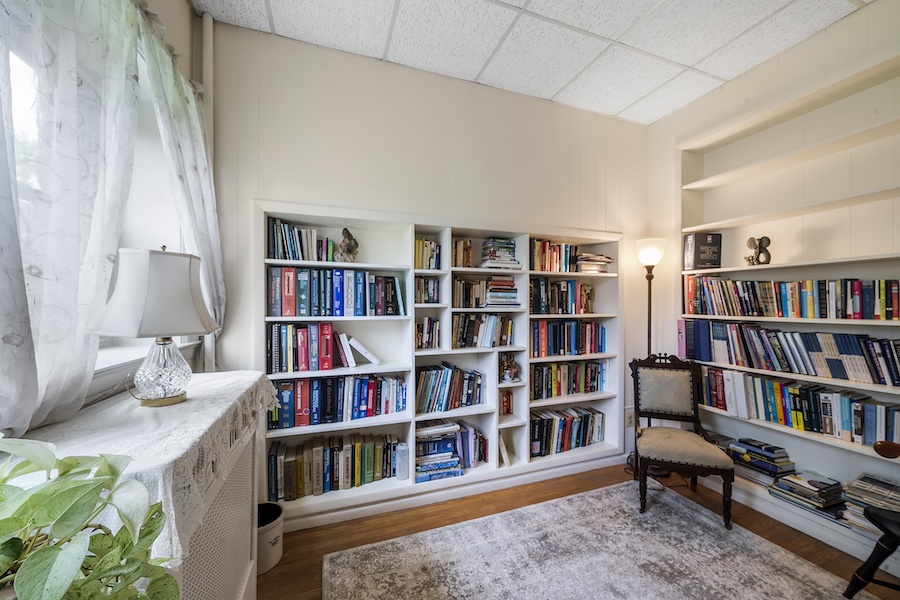 A library lies off the living-room part.

If you’re the sort that loves to throw large social events, this space was made for them — and this house has several others to go along with it. 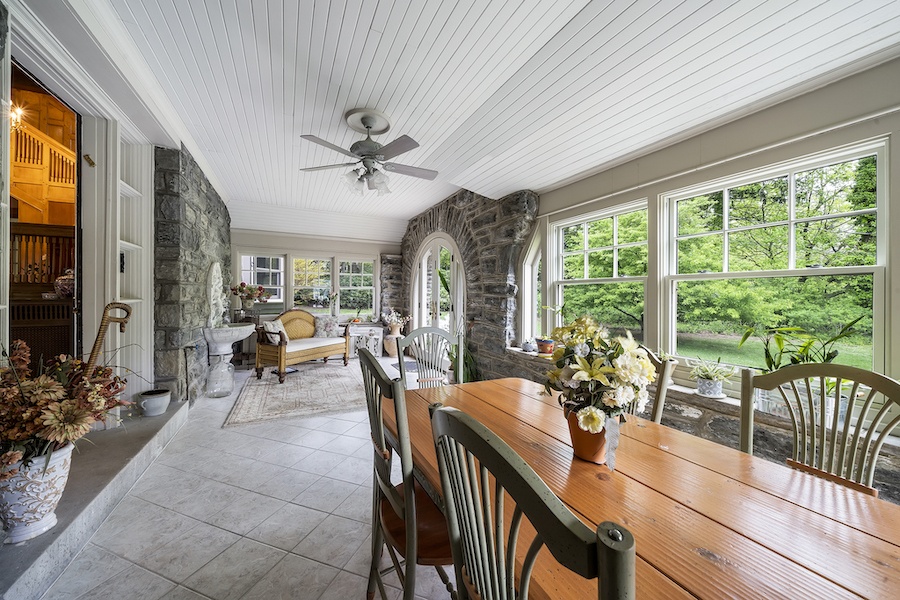 One of them is the sunroom, which you enter from a more impressive door next to the driveway. The combination of stonework, large windows and a batten-board ceiling make it feel light and substantial at the same time. 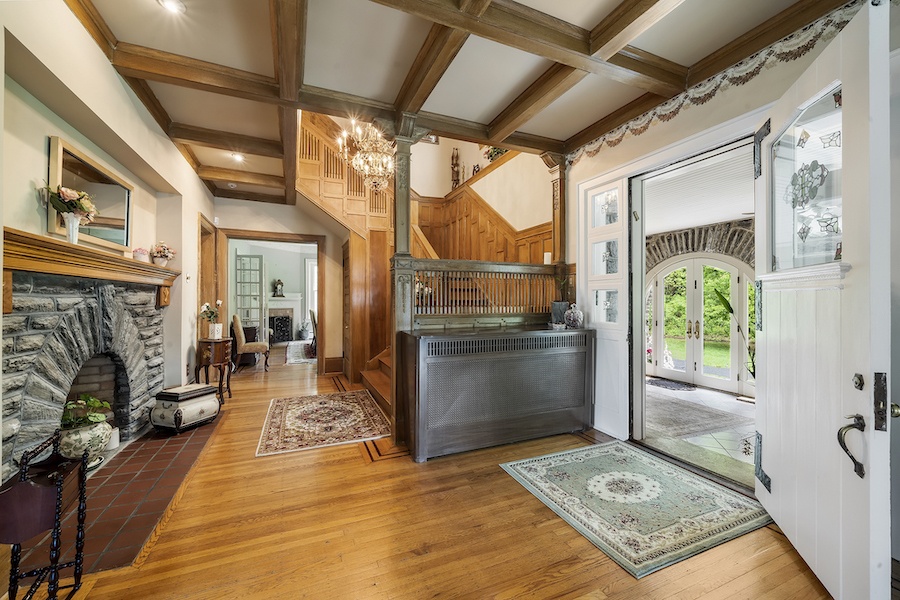 The door from the sunroom into the house proper deposits you in its foyer, which is one with the adjacent living/music room. 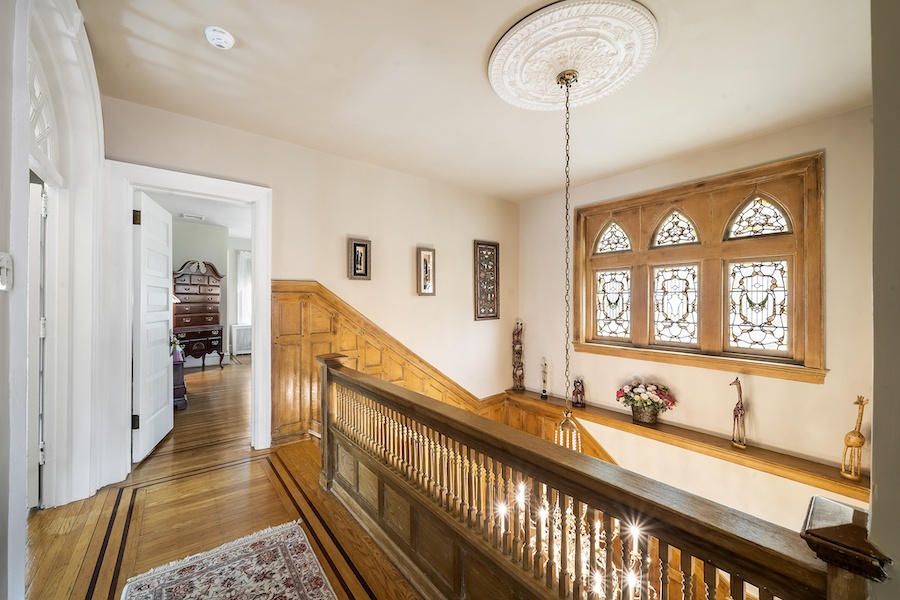 This two-story-high space is the house’s real jaw-dropper. It has a fireplace, rich wood paneling and staircase banisters, and a large chandelier hanging from its second-floor ceiling. There’s a powder room under the main staircase to the second floor. 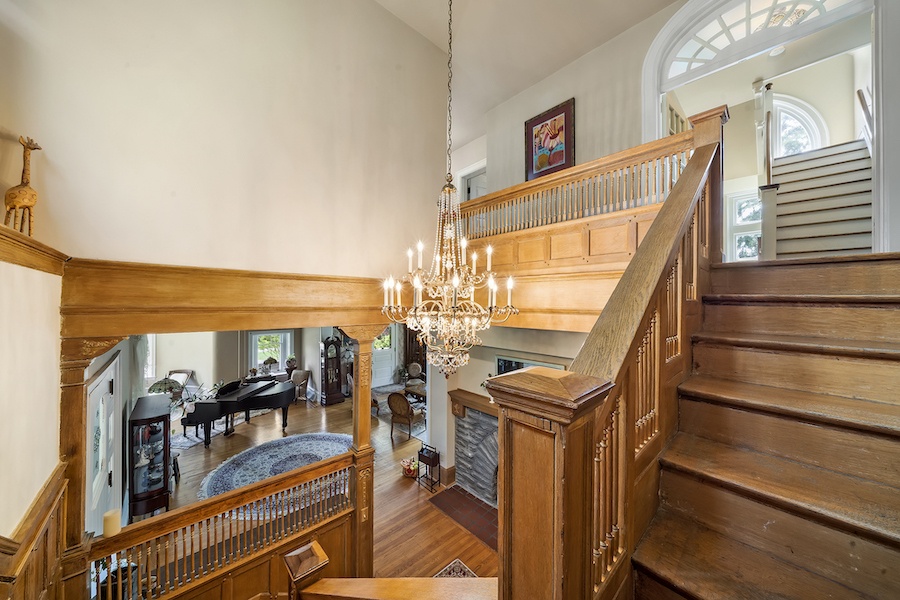 That staircase also has a trio of Gothic stained-glass windows. And a second staircase connecting all three above-ground floors is located across from it. (On the main floor, it feeds a hallway once used by servants.) 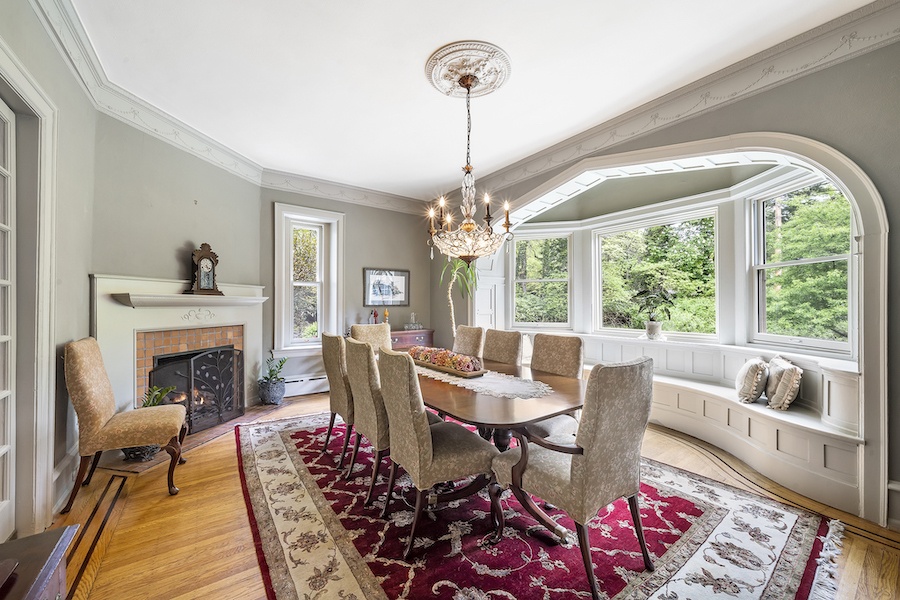 On the other side of the foyer sits the formal dining room. I suspect that the single-pane windows in its bay are a more recent addition. 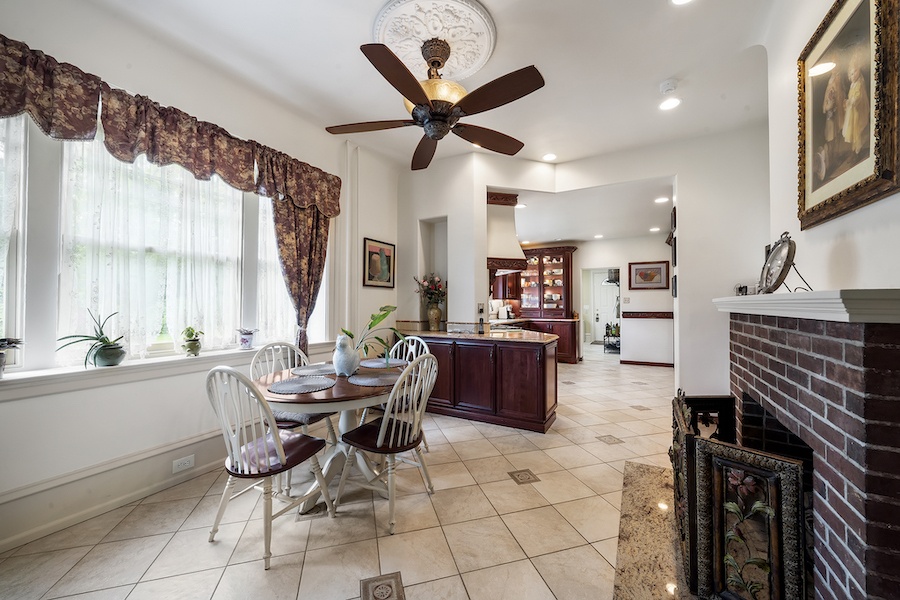 And behind the dining room you will find the up-to-date kitchen and adjoining breakfast room. 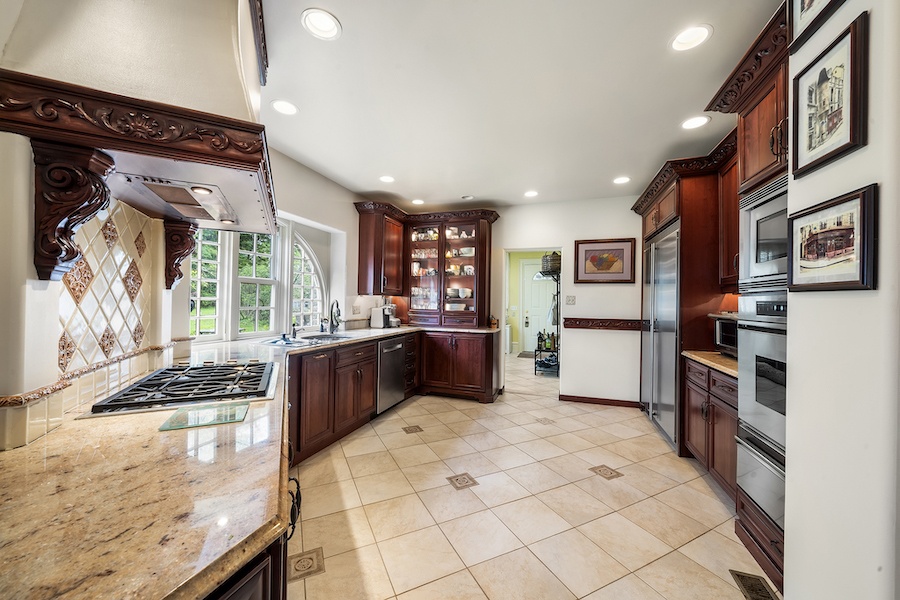 The breakfast room has a fireplace, and the kitchen boasts a commercial-size refrigerator, an oven/steamer/warming drawer trio and a gas cooktop. Beyond the kitchen lies the laundry and mud room.

The second floor contains four large bedrooms and three baths. Two have en-suite baths, while the other two share a hall bath. 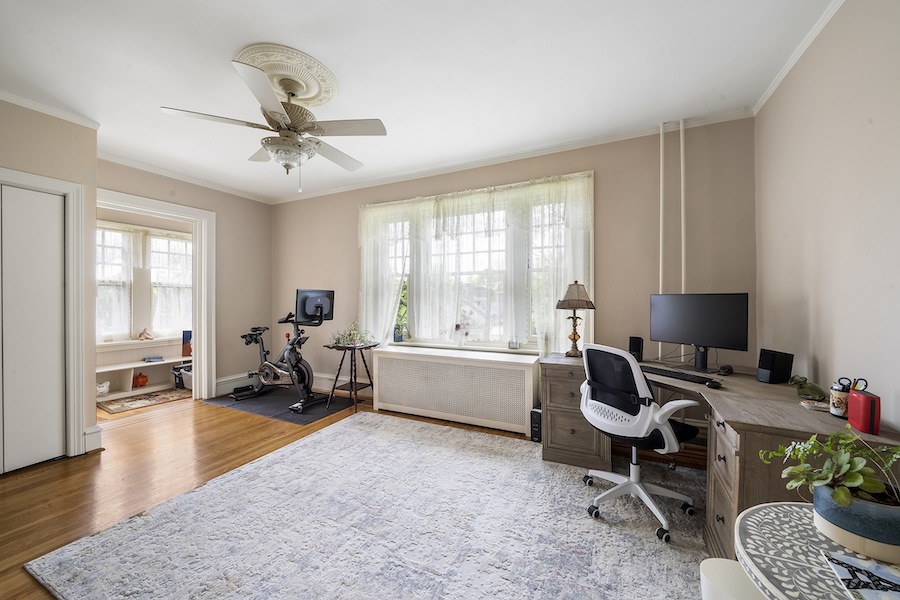 One of the two bedrooms sharing that bath functions as a home office right now. 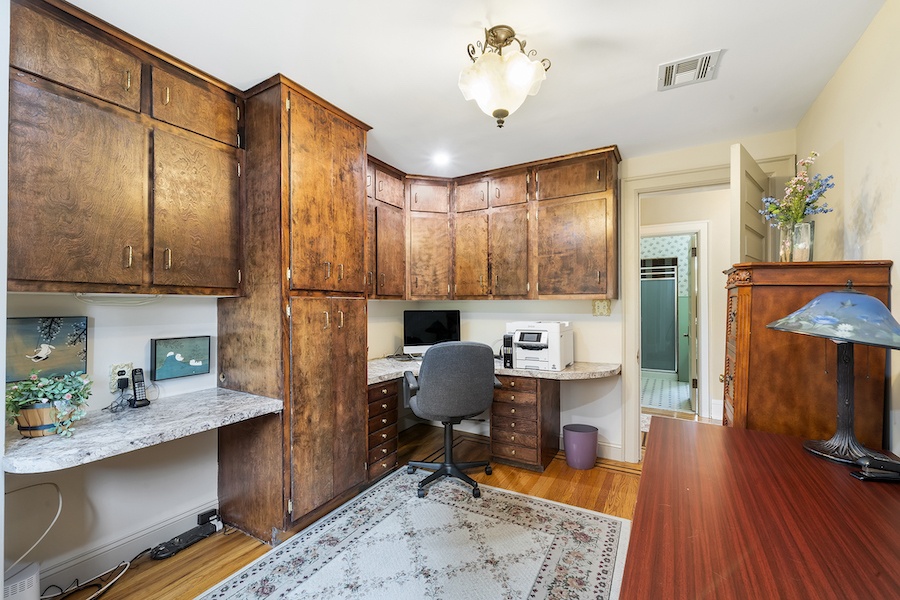 But there’s also an actual home office on this floor, with custom built-in cabinets. 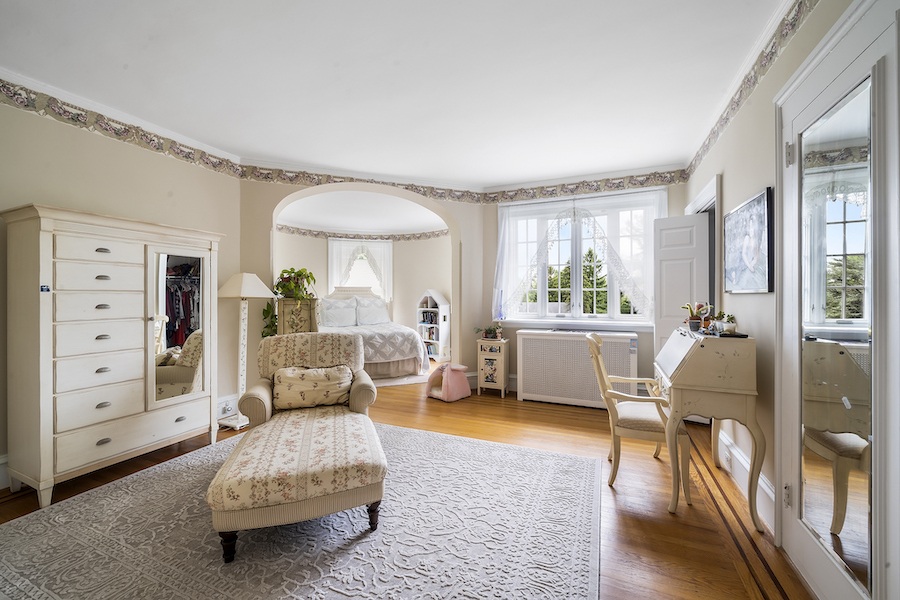 The two en-suite bedrooms are both extra spacious. The one with the turret is big enough to serve as a primary bedroom. 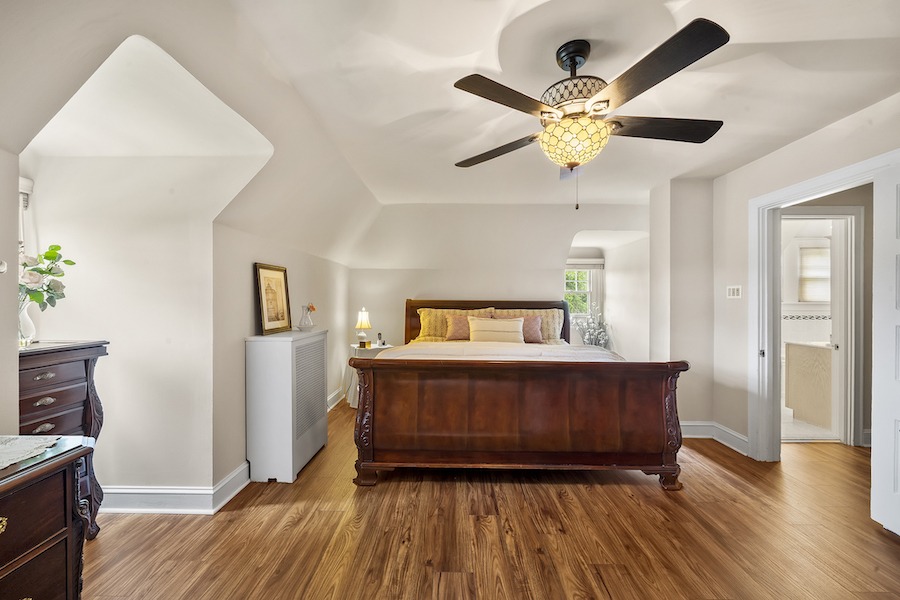 But it’s not. The primary bedroom is part of a top-floor suite that functions like its own apartment. 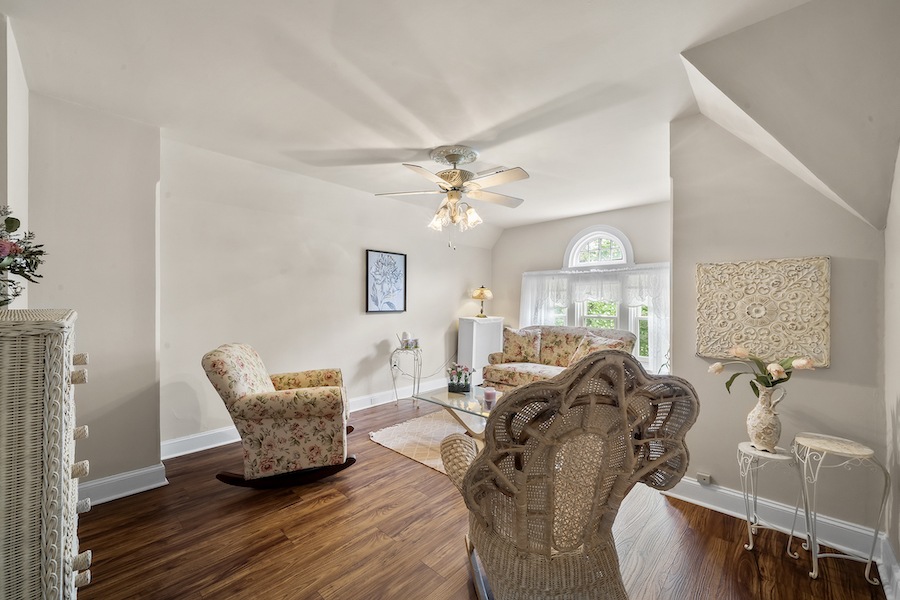 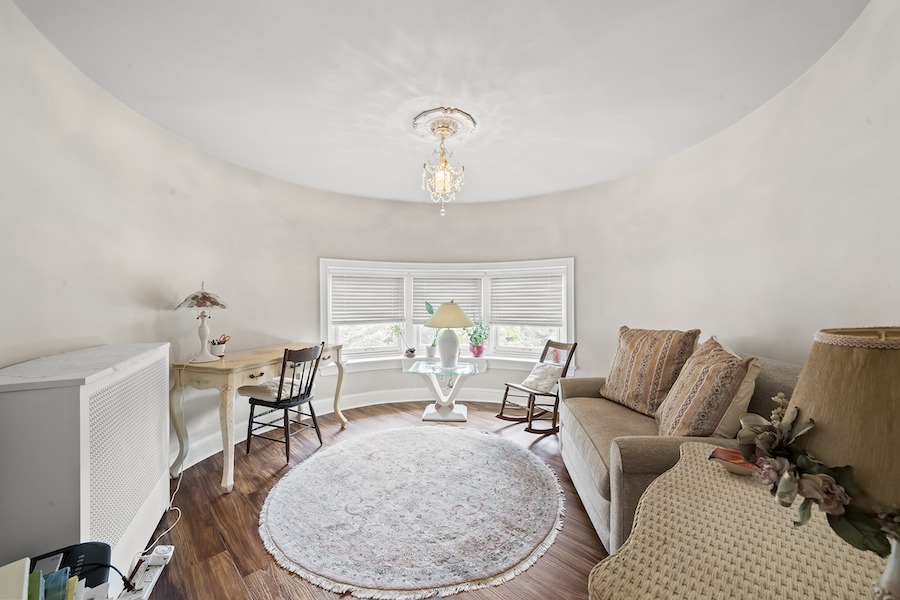 It has its own living room and a separate sitting room. 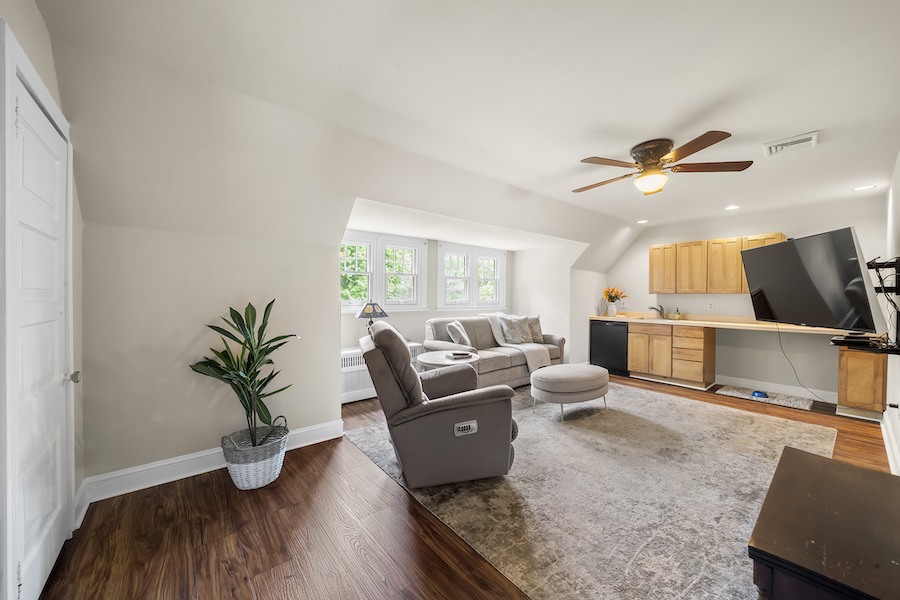 And it has a media room with a wet bar and a mini-fridge. The wet bar could easily be turned into a kitchenette with some minor alterations. 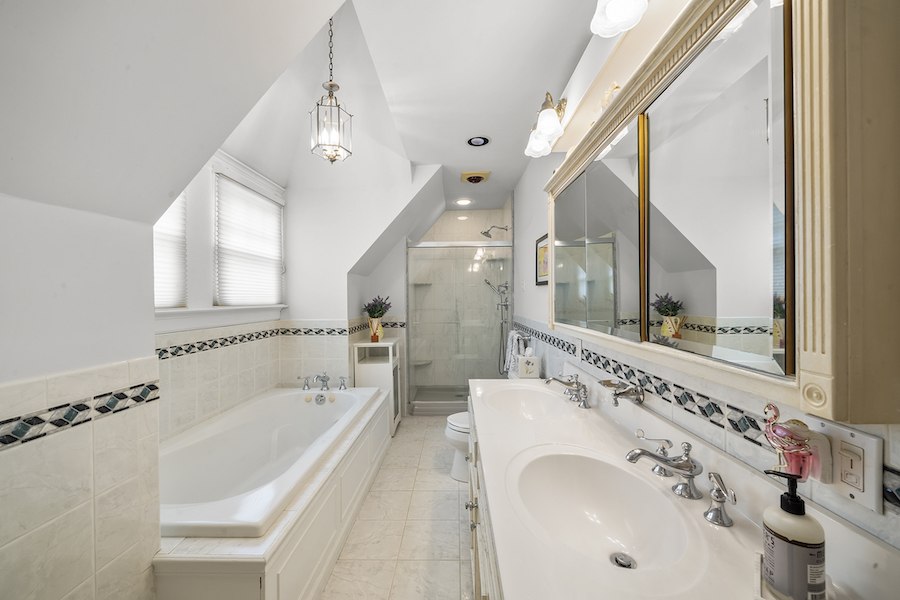 It has a huge walk-in closet, of course, and a luxurious primary bathroom. 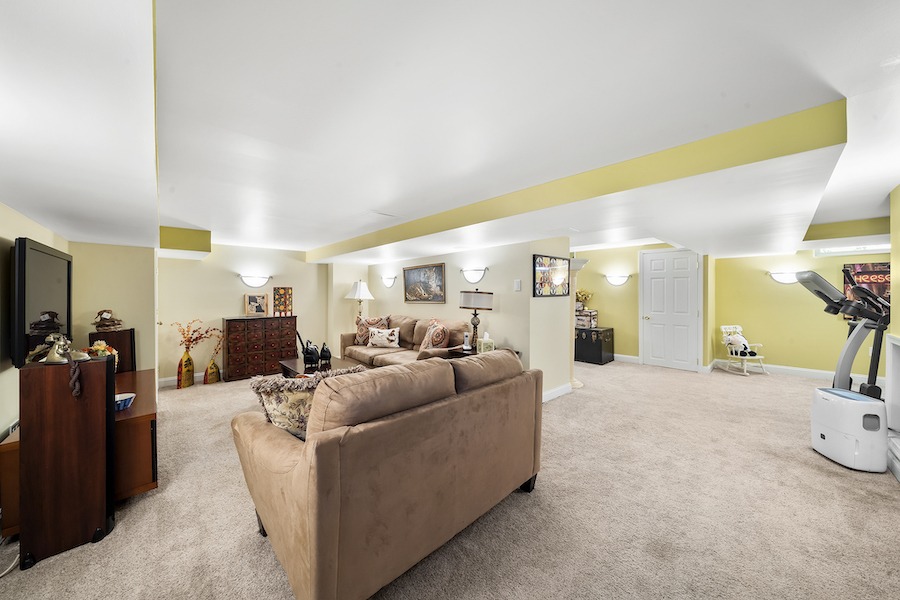 And down under all this is a finished basement multipurpose room, accessed by stairs from the breakfast room.

This Horace Trumbauer-designed Wyncote Queen Anne house for sale, then, has everything a modern family might want and then some. But there’s more. 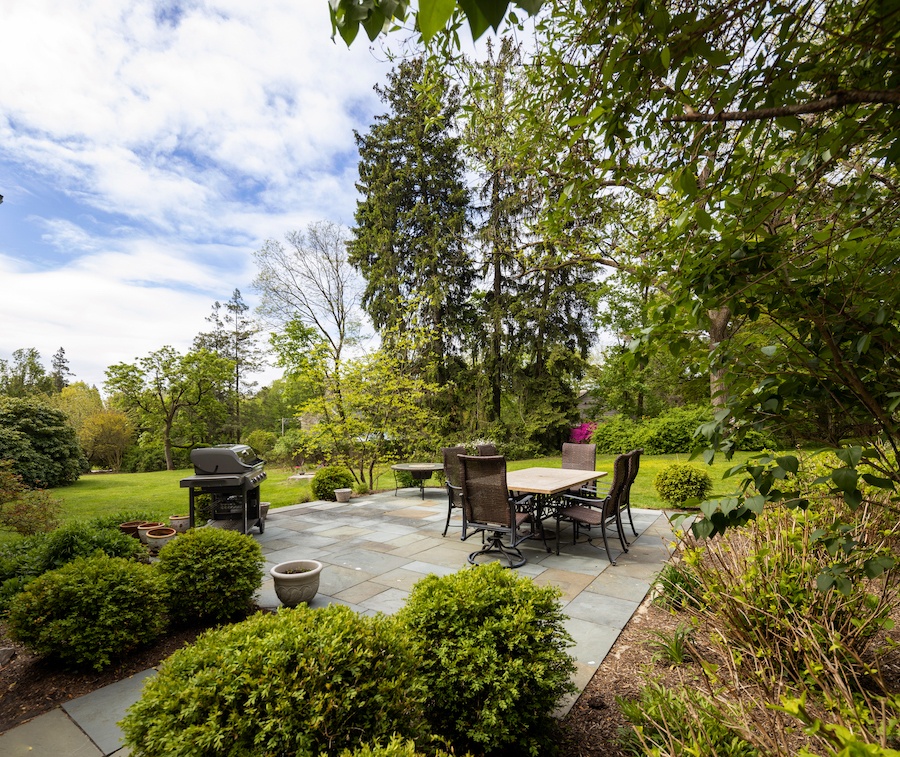 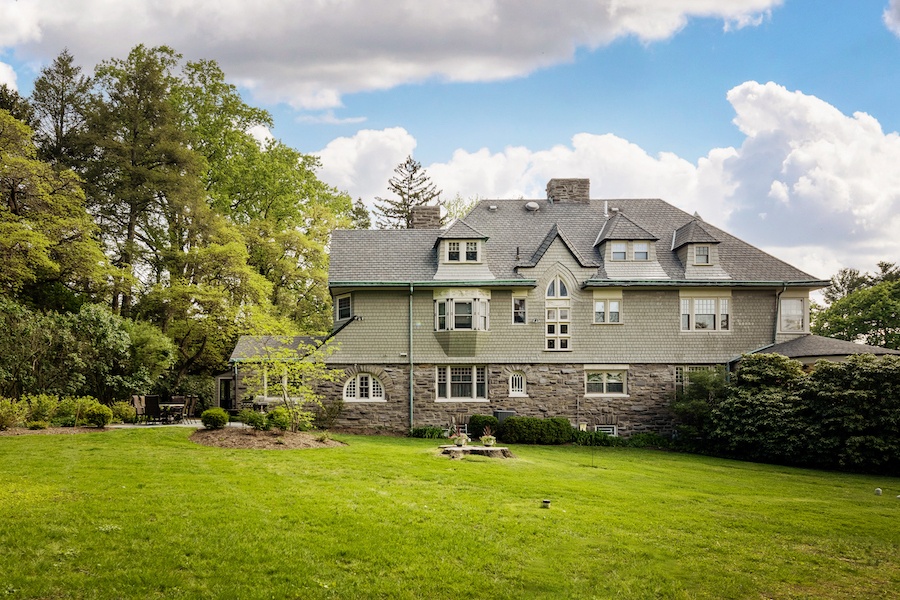 Starting with a backyard as big as the house and a stone patio overlooking it. 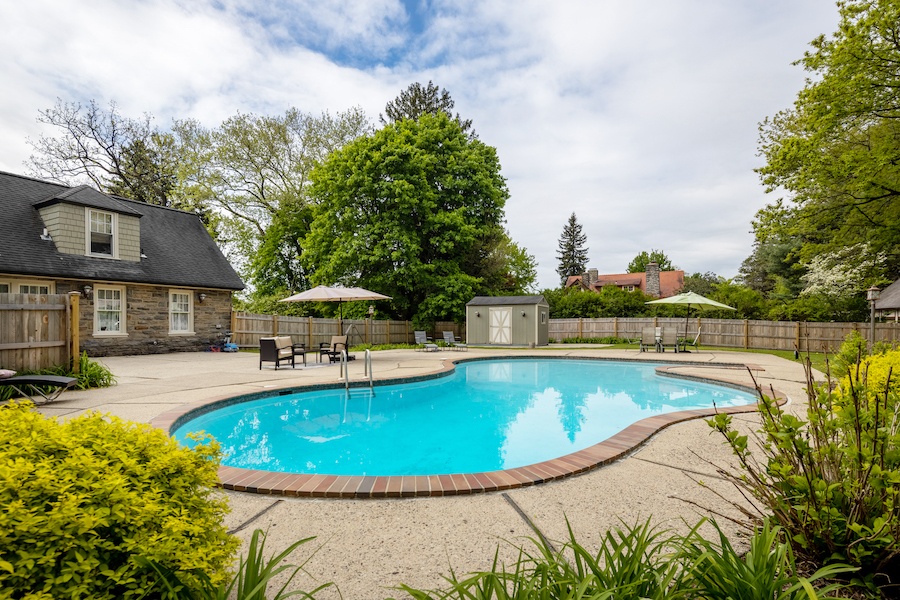 Then there’s the pool located behind the carriage house. 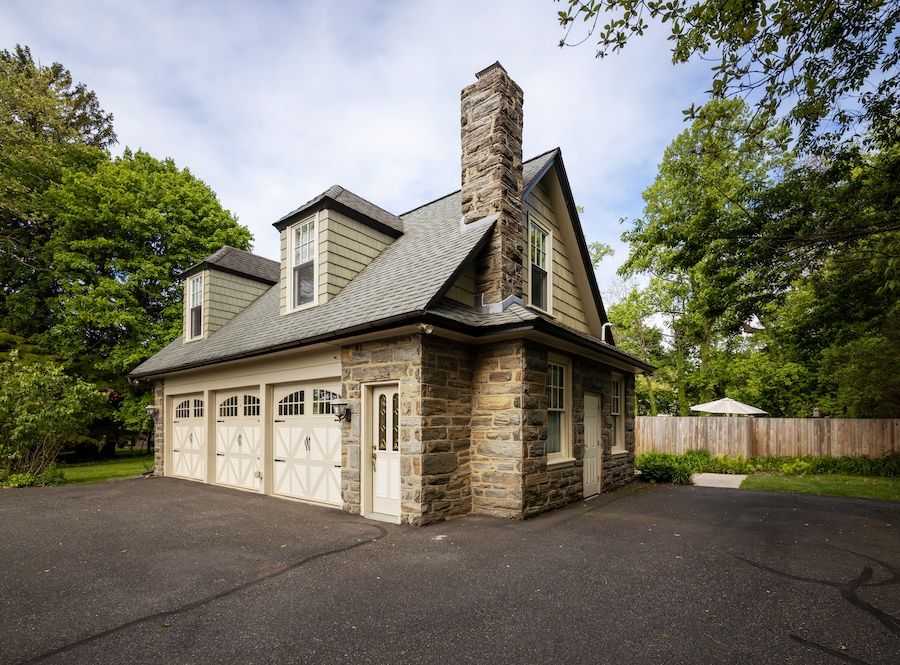 The carriage house has room for three cars — and the in-laws, or an au pair, or your kids not yet ready to fly the coop after college. That’s because it has a one-bedroom apartment on the second floor.

And if all the green space attached to this house isn’t enough for you, the Curtis Arboretum and its dog park are right across the street. You can also walk to Jenkintown-Wyncote Regional Rail station for a quick trip into the city, and Arcadia University and Cedarbrook Plaza are a short drive away.

I’m sure Horace Trumbauer didn’t anticipate that his Gray Towers would become the nucleus of a university, or that shopping centers and subdivisions would surround both it and this Wyncote Queen Anne house for sale. Or maybe he did, for he sure anticipated the way we live today in the design of this house.