A lot of the history of Philadelphia’s 19th-century nouveaux riches is tied up with the story of this “summer house” designed by the legendary Horace Trumbauer. 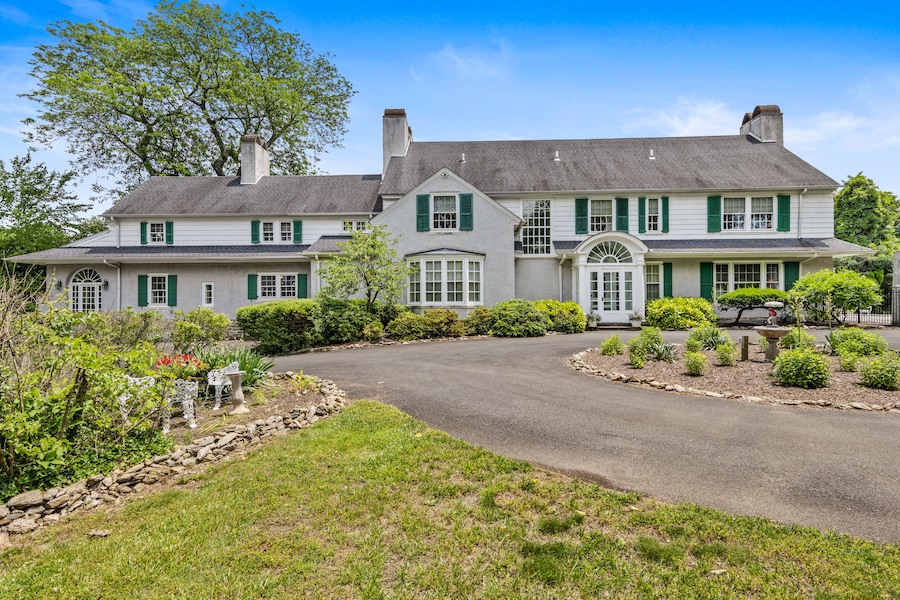 When Horace Trumbauer designed this house for George and Stella Elkins Tyler in 1912, this was its rear entrance. But since all but one of the 22 acres that had once been part of its estate got subdivided from the 1920s onward, this is now the gracious front door to this beautifully restored and updated house at 1421 Hopeland Rd., Wyncote, Pa. 19095 | Photos: Colin Burkhardt, CDB Photography, via BHHS Fox & Roach Realtors

Were the great Penn sociologist E. Digby Baltzell, the chronicler of the ways of the upper crust, alive today, he would be able to explain to you what this Horace Trumbauer-designed Wyncote Colonial house for sale is doing in this part of Cheltenham Township.

Here’s the short version: Philadelphia’s old money, which had settled in the “Welsh Barony” that we now know as the Main Line, rebuffed the efforts of its 19th-century new money to join their club (figuratively and literally; they had several actual clubs to choose from). The new money — oil prospectors like William Lukens Elkins, traction magnates like Peter A.B. Widener and bankers like Sidney Frederick Tyler — then set about creating their own gilded ghetto in Cheltenham Township, north of the city.

By the late 19th century, these new grandees gave Cheltenham the largest concentration of millionaires in the entire Philadelphia region. And they commissioned the most notable architects of their day to design grand mansions and more modest homes for themselves and their offspring.

Few of these architects were kept busier than Horace Trumbauer, the architect who designed formal and informal homes for both old- and new-money Philadelphia in the late 19th and early 20th centuries.

The most storied of these, of course, is Lynnewood Hall, the 75,000-square-foot, 110-room mansion Trumbauer created for Widener. Built between 1897 and 1900, it has sat vacant for more than 50 years. A series of religious groups has stripped it of much of its ornamentation and fixtures, and while efforts to restore it have been discussed, none have come to fruition.

My trip from my East Germantown residence took me first past the less-exalted Lynnewood Gardens apartments, then past Lynnewood Hall itself, before I arrived at Hopeland Manor. Unlike Lynnewood Hall, this much more modest Trumbauer-designed house has had the good fortune to remain in the hands of stewards who have taken very good care of it over the decades since its completion in 1912.

Hopeland Manor can trace its origins to two of those families and its location to yet another Gilded Age baron, financier and railroad tycoon Jay Cooke. Sidney Tyler built Hopeland Manor as his “summer house” on 22 acres he bought from the Cooke estate in 1912 in order to be close to his son, George, and his daughter-in-law, Stella Elkins Tyler.

George Tyler had inherited land adjacent to this estate from George Elkins, William’s son, upon Elkins’ death in 1920 thanks to his having married Stella. Upon those 14 acres, they had built their own residence, Georgian Terrace, in 1911.

(The Tylers moved from Georgian Terrace to Newtown in the 1930s; Stella founded what is now the Tyler School of Art and Architecture of Temple University in their former home in 1935, then donated the estate to Temple in 1939. Tyler moved to Temple’s main campus in North Philadelphia in 2009.)

But Sidney spent only six summers next door to his children. In 1918, he sold Hopewell Manor to John Campbell for $160,000. The reason you enter it today through its original back door is because Campbell sold it to a buyer who subdivided all but about three acres of the estate; the reason you can enter it at all is because Morris Wolf, a founding partner of prominent Philadelphia law firm Wolf, Block, Schorr & Solis-Cohen, bought the house and about an acre of land around it from that buyer in 1924 in order to keep it from being demolished and subdivided. 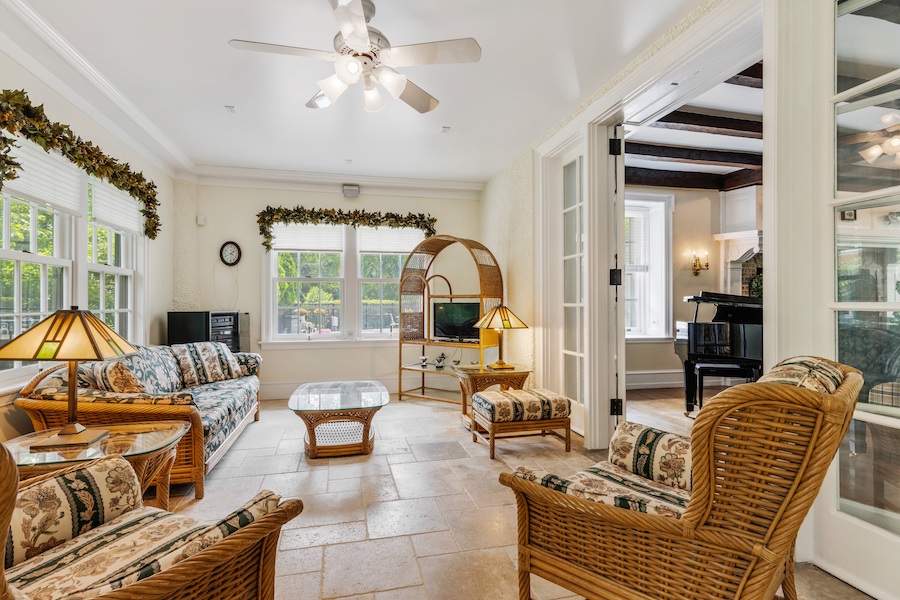 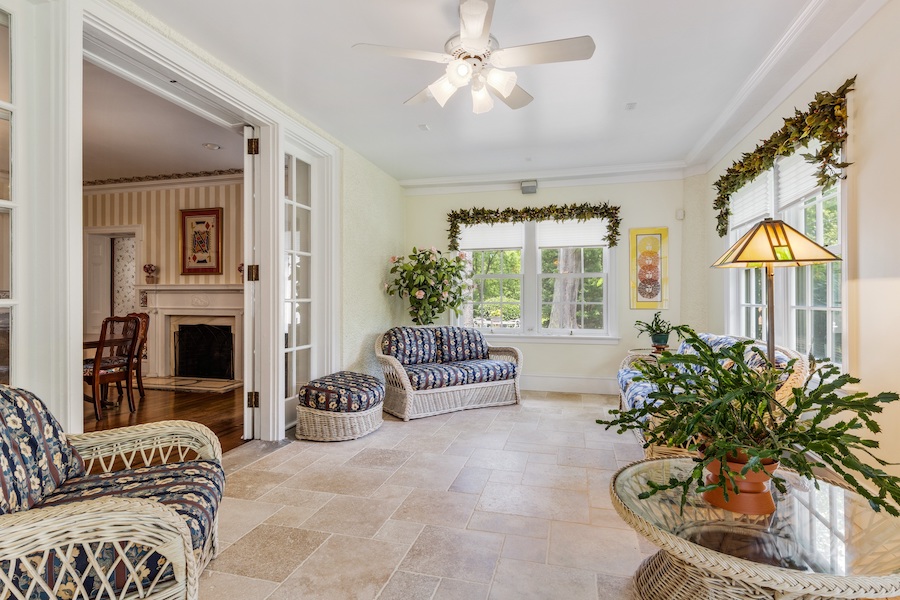 As originally built, one would have entered the house through a front door located between two three-season porches that flanked it. After most of the estate was sold off, these porches got converted into a single bright sunroom that connects all three of the main living and entertaining spaces on the first floor.

This space is itself outfitted for entertaining, too: It has speakers and many outlets in its ceiling. “The current owners wanted the ability to provide ambient or mood lighting across the entire ceiling of this room to make it sparkle for parties,” writes the listing agent. 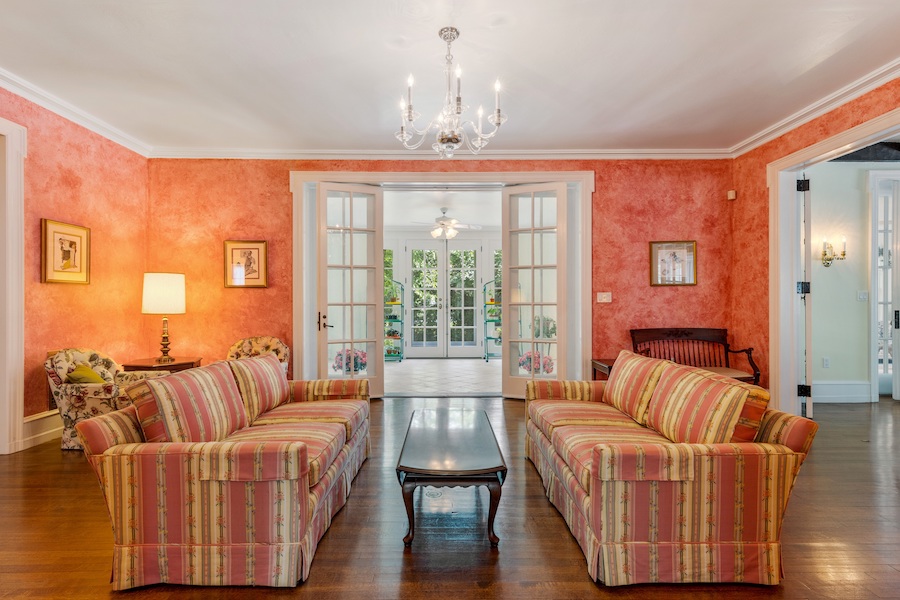 In the center of the main floor is the reception room, which you now enter through a foyer connecting to it from the back door-turned-front door. 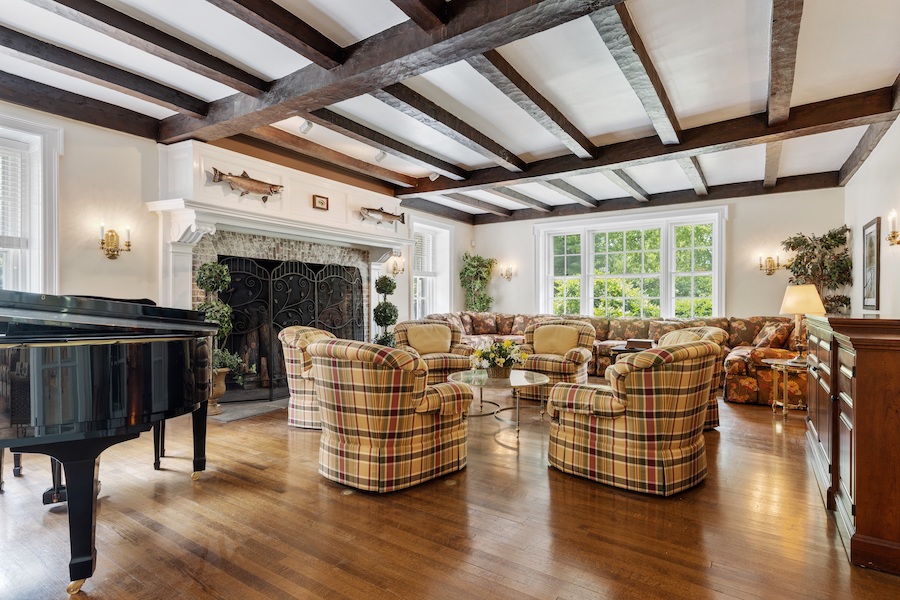 To the right of the reception room, at the house’s west end, is the living room, home to one of this house’s seven fireplaces. This one burns wood. It also has a beamed ceiling and French doors that lead to the pool just outside it. 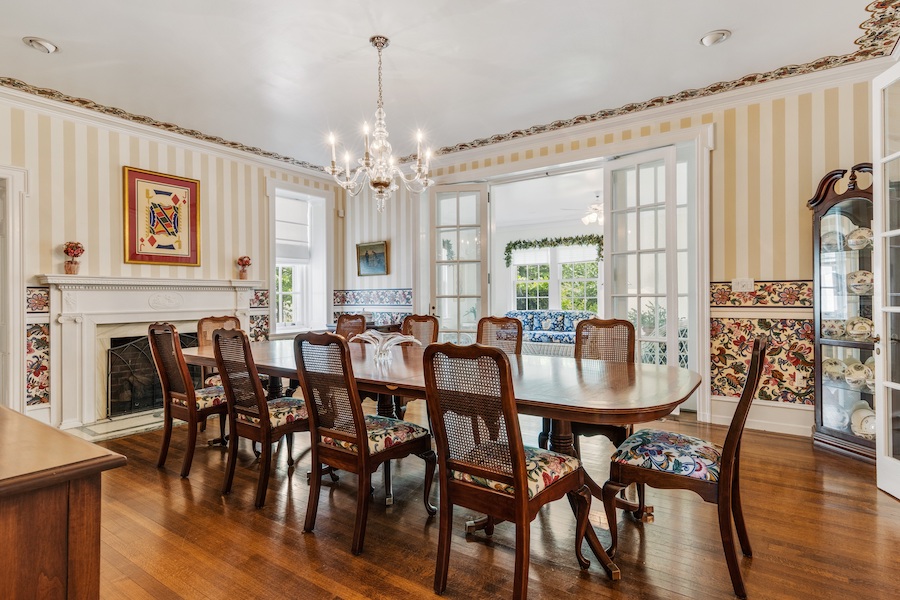 To its left is the formal dining room, which can easily accommodate a dinner for 20 guests. It too has a fireplace, and it has detailed crown molding. And if you want to throw a really big dinner, you could set up tables in the sunroom, beyond the French doors. 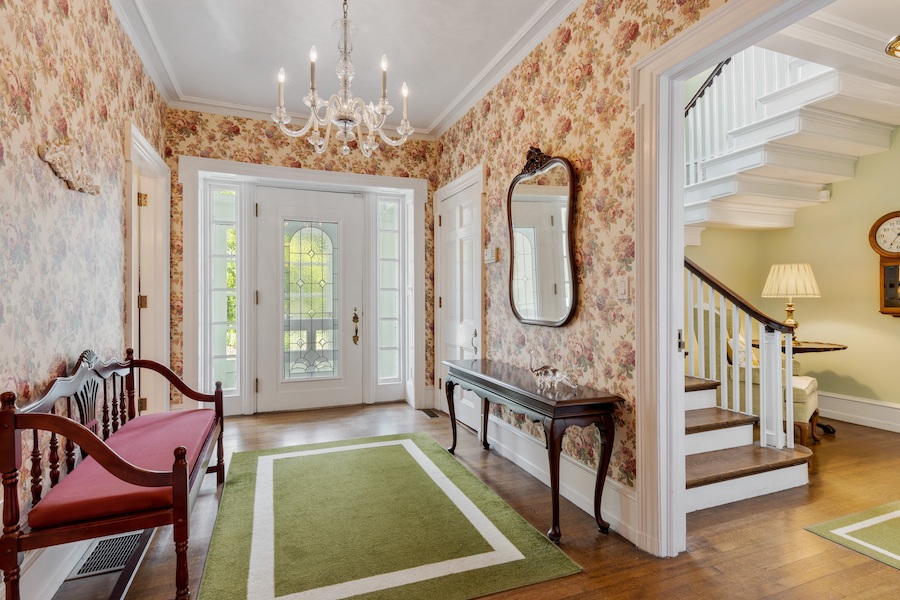 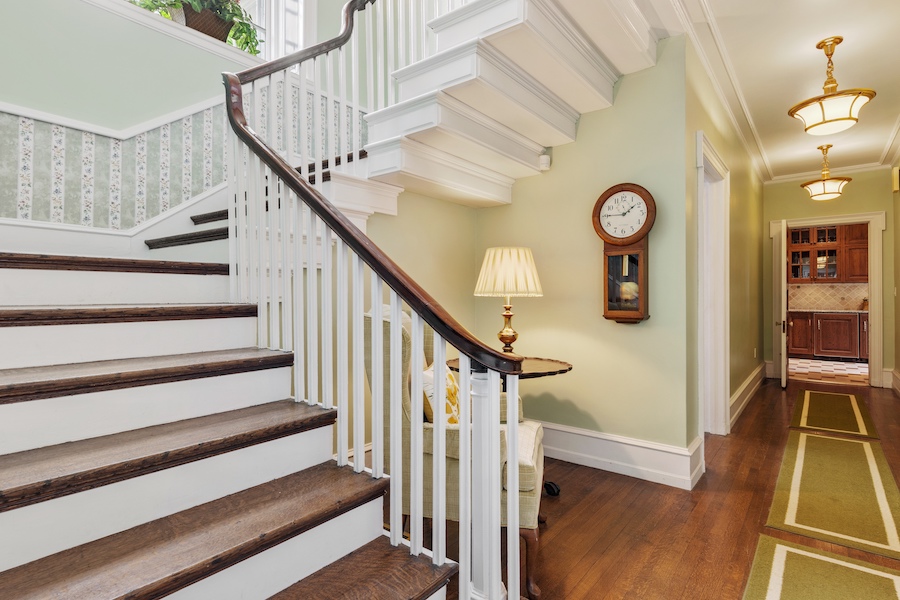 A hallway leads from these stairs to the wing where the servants once lived and worked. (The lights in this hallway, like most of the other light fixtures in this house, are original and have been beautifully maintained.) 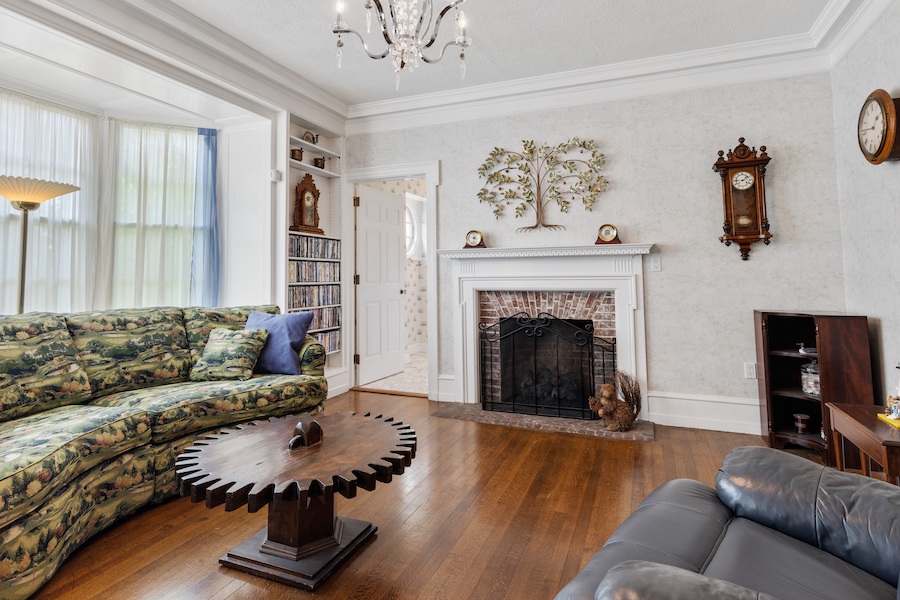 On its way there, it passes this library. Here you will find the house’s third fireplace and its second powder room (the first is off the foyer to the right of the front door). 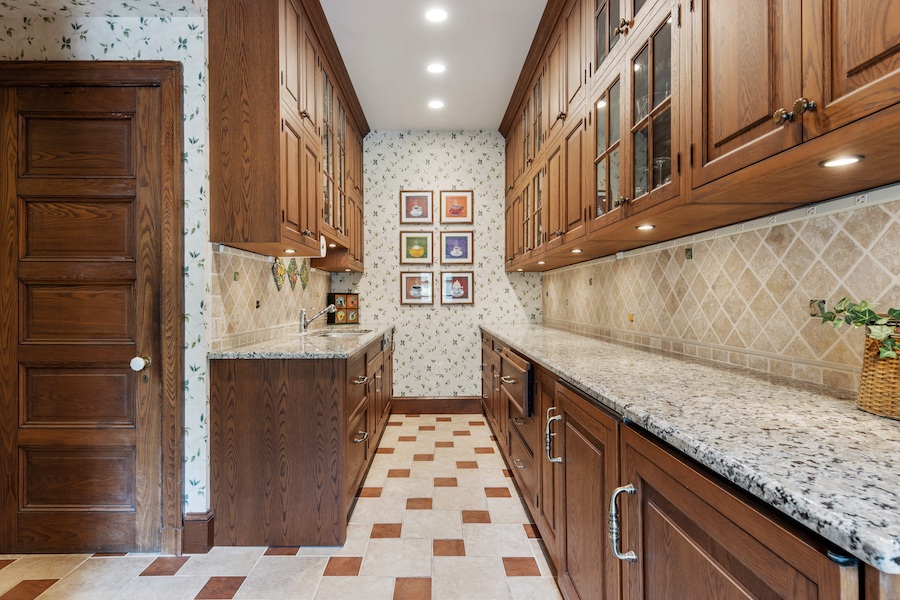 At the end of the hallway lies the first of the servants’ spaces, the butler’s pantry. Given that the age of the live-in domestic staff is long past, the owners completely redid this wing of the house in 2005. In so doing, however, they sought to match the original chestnut doors and trim in each of the rooms. To do that, they chose stained white oak.

The kitchen spaces are very well-equipped. The butler’s pantry has a large storage closet, a beverage fridge, two freezer drawers, a warming drawer, a dishwasher, and a garbage disposal in its sink, the first of four total. 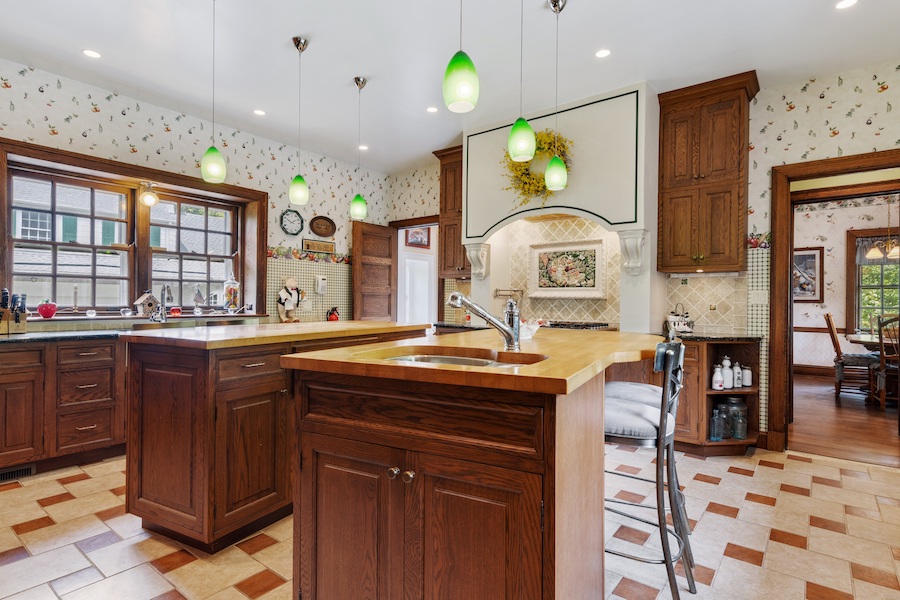 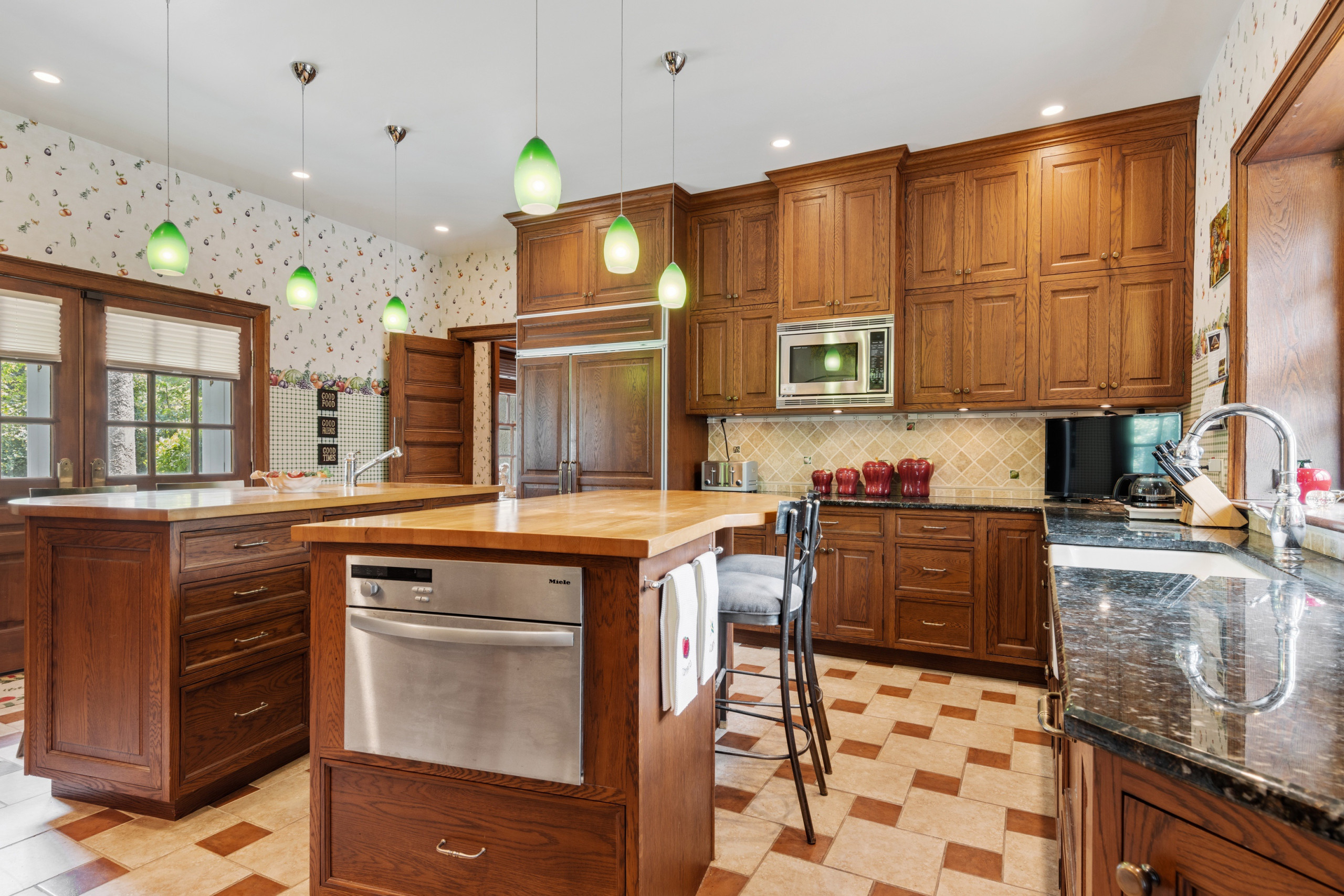 Doorways connect this room to both the dining room and the main kitchen. The owners removed a window from this room and replaced it with a French door that opens out onto a flagstone patio with a gas line ready to be hooked up to a grill. It has two center islands set at an angle to the room, with seating for two on each island, butcher block countertops and a sink with a garbage disposal at the end of one.  There’s a third sink along the front wall. Appliances include a Sub-Zero side-by-side refrigerator-freezer, two Fisher & Paykel DishDrawer dishwashers, a warming drawer and a Miele steam oven. 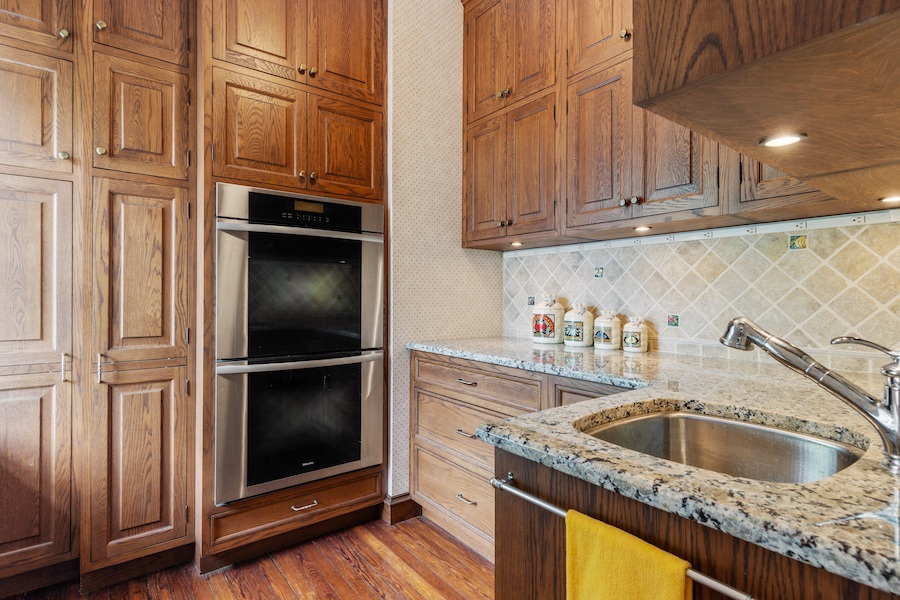 The next room in the sequence is the chef’s pantry, next to the back stairs. Here you will find a double wall oven, the fourth sink and loads more storage cabinets along with a heated towel rack. (It should be clear by now that this kitchen has what it takes to prepare one of those huge dinners.) 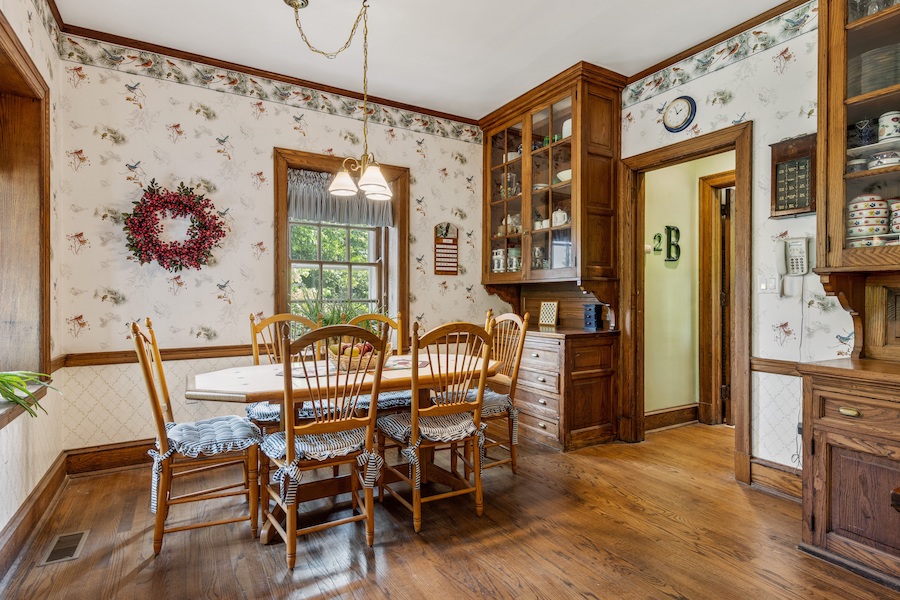 Finally, this wing ends in the breakfast room. This had originally been the servants’ dining room, and the original call bells remain in place. So does one of its original cupboards; the second one was built from materials salvaged when the kitchen rooms were rebuilt.

Upstairs, four bedrooms surround the second-floor landing, and a corridor along one side of the house leads to two more along with the back stairs. 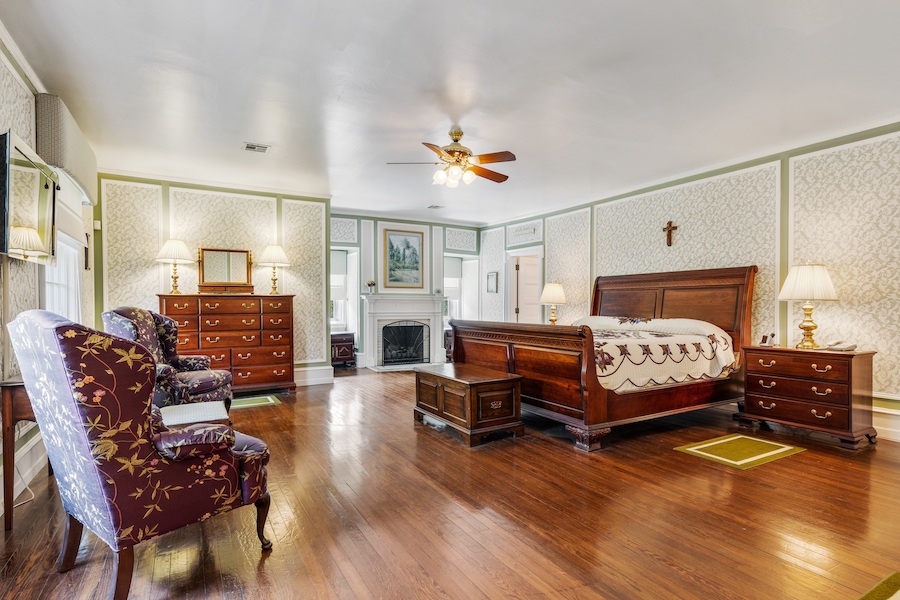 The primary bedroom, part of a two-room suite, takes up the entire west end of the second floor. It and the other three bedrooms in the main wing have fireplaces (three gas, one electric). 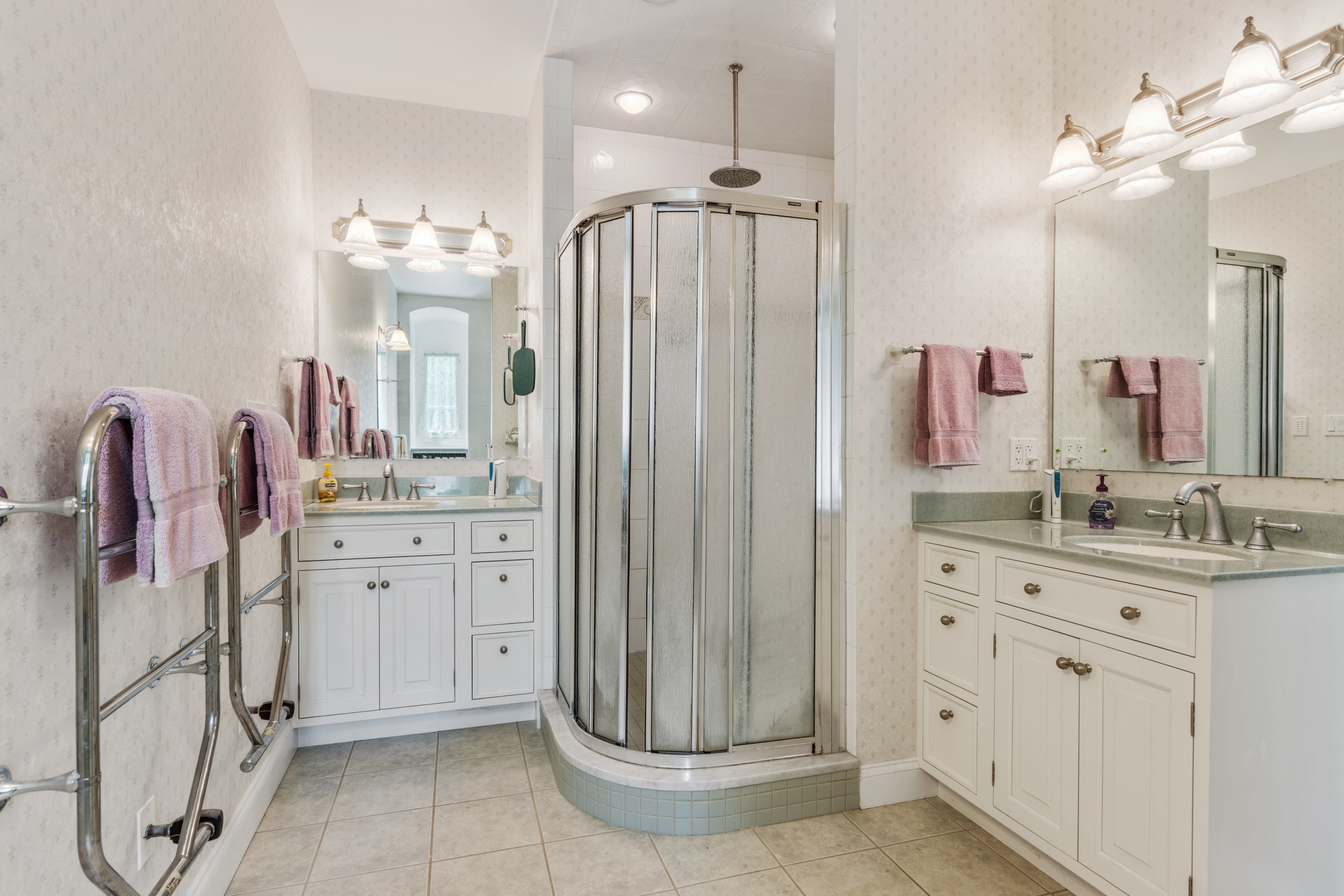 The primary bathroom has dual vanities, a glass-enclosed shower stall, an unusual small window mounted in the middle of a chimney, a radiant heated floor and heated towel racks. You’ll also find those last two elements in every other bathroom on this floor. 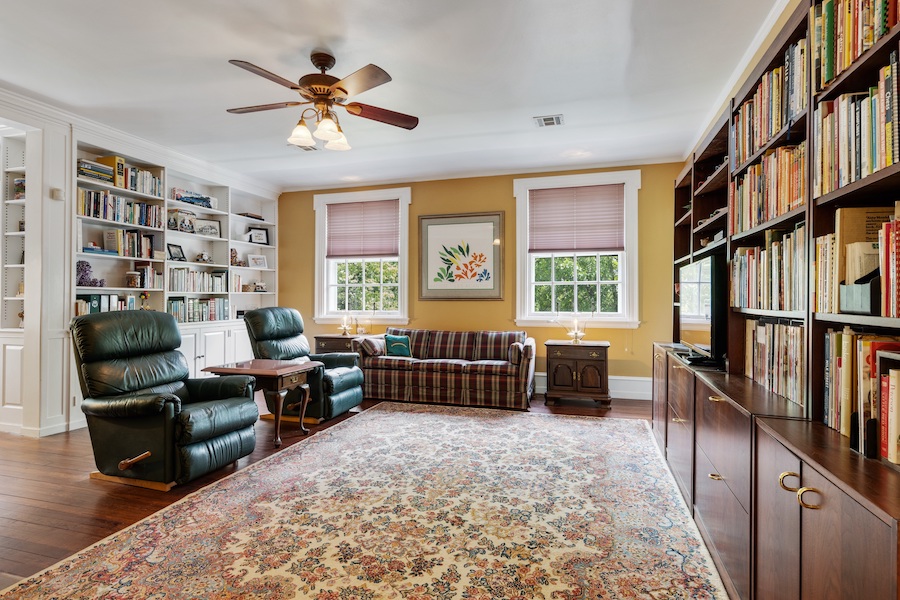 On the other side of a walk-in closet from the primary bedroom is another bedroom that currently serves as a home office and second library. 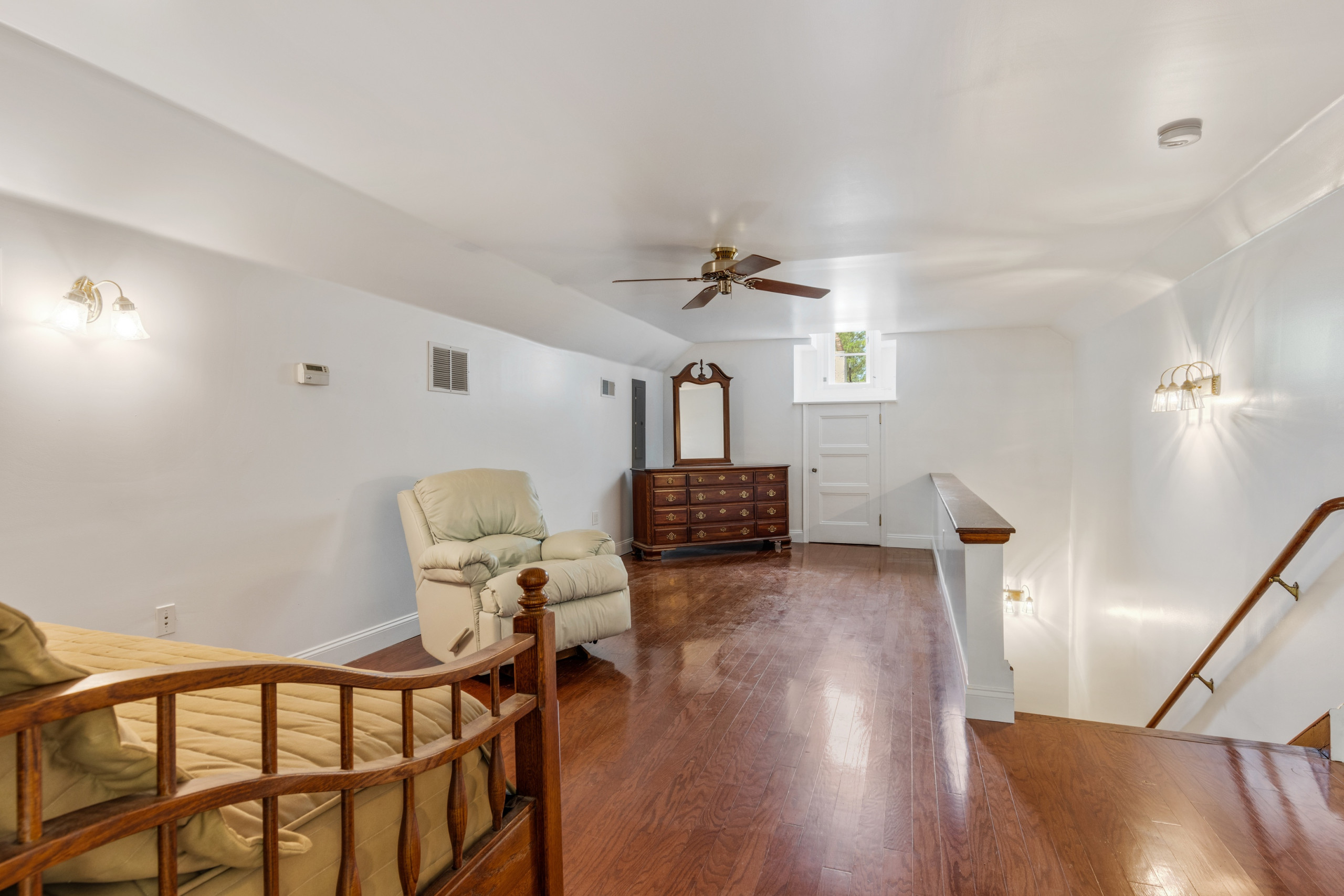 A stairway behind a door in the second-floor hallway leads to the third floor. Here you will find a series of bonus rooms that currently serve as lounge space, storage space and workshop space. The window in this photo is also inserted into a chimney.

A separate stairway from a bedroom in the servants’ wing leads to an unfinished attic in that wing. And there’s even more storage and workshop space in the unfinished basement, where you will also find a wine cellar, two of the three original one-piece laundry sinks and the original main electrical circuit breakers. These museum pieces have been preserved but are no longer in use, as the house also got rewired with 600-amp circuits.

Over the detached garage is currently vacant space. You could rehab this space and turn it into an au pair or guest suite.

Both the flagstone patio next to the kitchen and the pool next to the living room have gas hookups for grills. 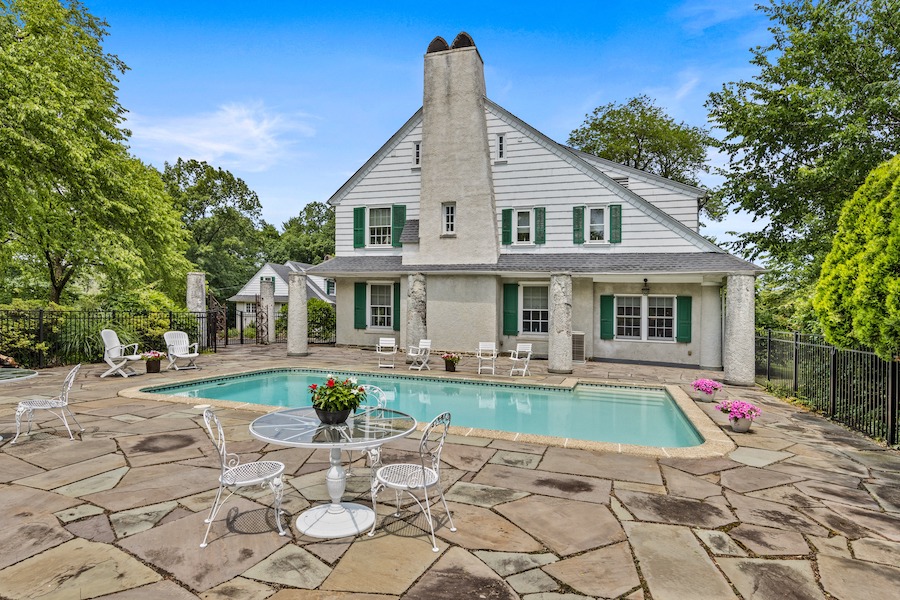 Pool; the pillars next to the house once supported the roof of a wraparound side porch

According to the listing agent, the gates leading from the driveway to the pool once graced the grounds of Penn Charter School.

While this house has been fully updated with new electrical wiring, a high-volume main gas line, Cat5 Ethernet, three water heaters (two of them recirculating) and five-zone climate control, the owners held onto all of the original materials they removed when they rehabilitated this house.  These materials have been stored in the basement and a storage room in the garage.

This means that should you so choose, you could make this Horace Trumbauer Wyncote Colonial house for sale even more of an authentic restoration simply by re-installing some of the original fixtures. I suspect, however, that you will find the one the current owners chose better meet your needs and tastes.

Given this house’s elegance, location and history, there’s only one listing agent out there who could do it justice in offering it for sale. Of course, I also drew liberally on the agent’s extensive description in writing this article. I’ll let you guess which one it is, or you can simply read on.

Updated June 21, 8:56 p.m., to correctly identify the builder of Hopewell Manor and the reason he built it; updated 9:22 p.m. to correct the chronology of its ownership after Sidney Tyler sold it.