On the Market: Historic Shingle Style House in Wayne

One of Horace Trumbauer’s earliest creations, this handsome house is part of the subdivision that made Wayne Wayne. 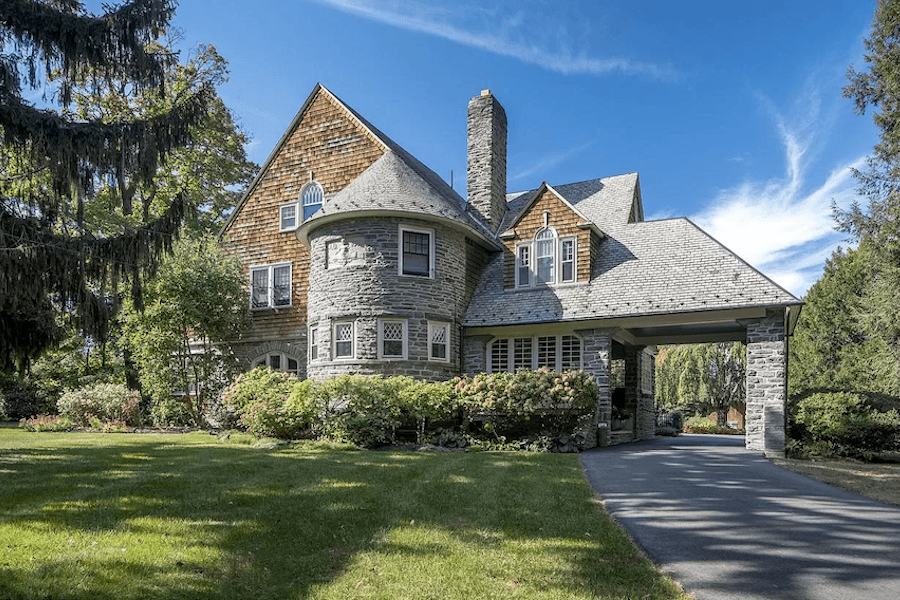 Are you a fan of noted Philadelphia architect Horace Trumbauer? If you are, you will no doubt be interested in owning one of his earliest works, this handsome Shingle Style house at 314 Louella Ave., Wayne, Pa. 19087 | Bright MLS images via BHHS Fox & Roach Realtors

That was the name of the huge 293-acre estate and 80-room mansion banker J.H. Askin built for himself in 1867 near the Cleaver’s Landing station on the Pennsylvania Railroad’s not-yet-storied Main Line. He named the estate for his two daughters, Louisa and Ella.

The estate also had its own gas works, its own waterworks and a hall for public gatherings Askin named “Wayne Hall” after the Revolutionary War hero, Gen. Anthony (“Mad Anthony”) Wayne. Banker Anthony J. Drexel and newspaper publisher George W. Childs were so impressed by how well-outfitted and spacious the Louella estate was that they bought it in 1880 and immediately began carving it up into house lots. The development, which they dubbed “Wayne Estate,” eventually became the nucleus of the community of Wayne.

By the time Horace Trumbauer was commissioned to design this house for developers Wendell and Smith in 1892, the railroad station had also been renamed for the community. The development of Wayne Estate was also proceeding at a steady pace, with houses like this one lining its streets. And young Trumbauer, who had established his architectural practice only three years earlier at age 21, was developing the informal yet opulent style that would endear him to numerous Gilded Age grandees, as you can see here.

This beautifully updated Wayne Shingle Style house for sale is the first one Trumbauer designed for Wendell and Smith. It sits on the street named for the original estate. And while it may not be as grand as “Louella,” it certainly doesn’t lack for elegance, space and creature comforts. 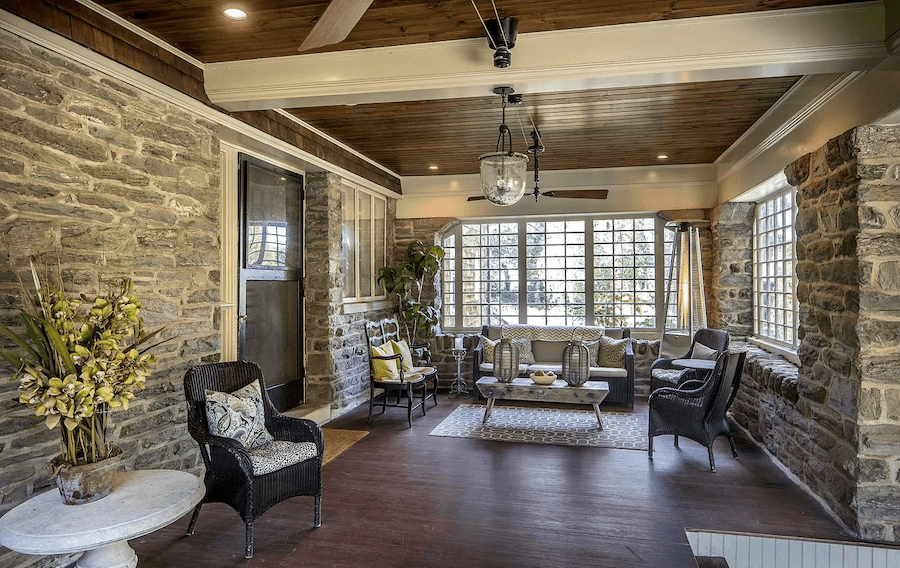 You enter the house via a handsome, almost-totally-enclosed front porch.

From the foyer, you can access almost all of the main-floor rooms directly. 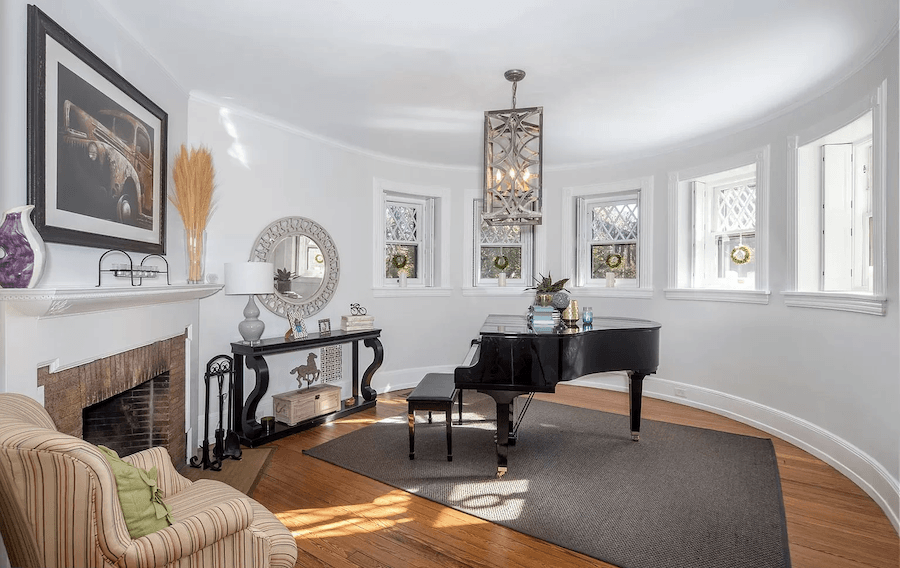 To your left lies the music room, in the main floor of the turreted section. Both it and the foyer have fireplaces that vent through a shared chimney. 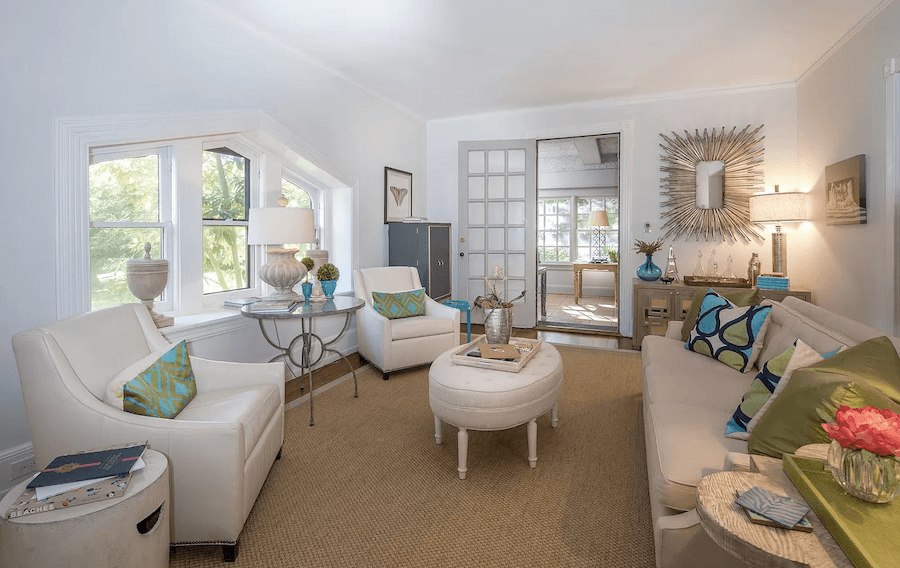 Ahead of you on the left side is the living room… 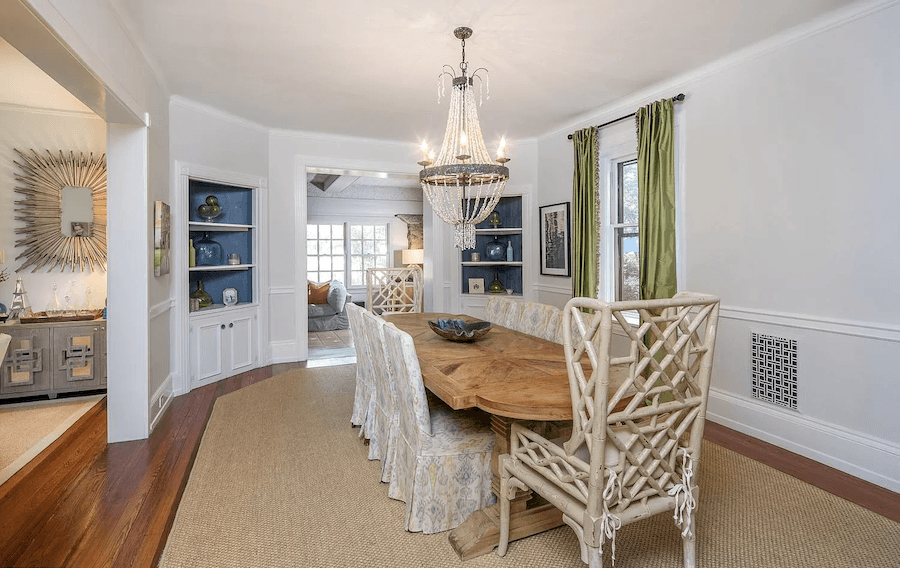 …and to the right, the dining room. A large archway lets you and your guests move freely between the two. 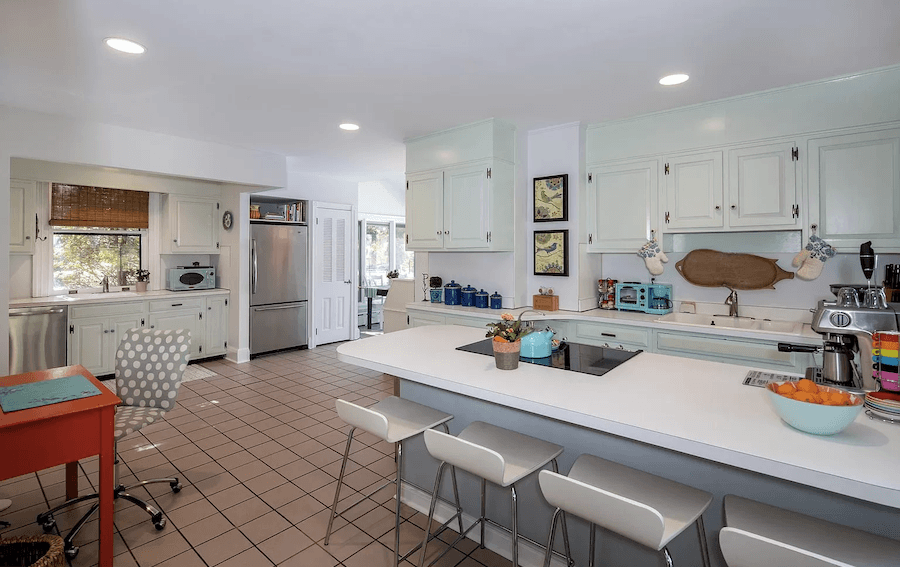 To the right of the foyer and dining room, an up-to-date kitchen with authentic cabinetry in the late-19th-century style offers plenty of space for meal preparation along with a breakfast nook. One of two laundry rooms and a half bath lie off the breakfast nook, and sliding doors connect the breakfast nook to the backyard deck. 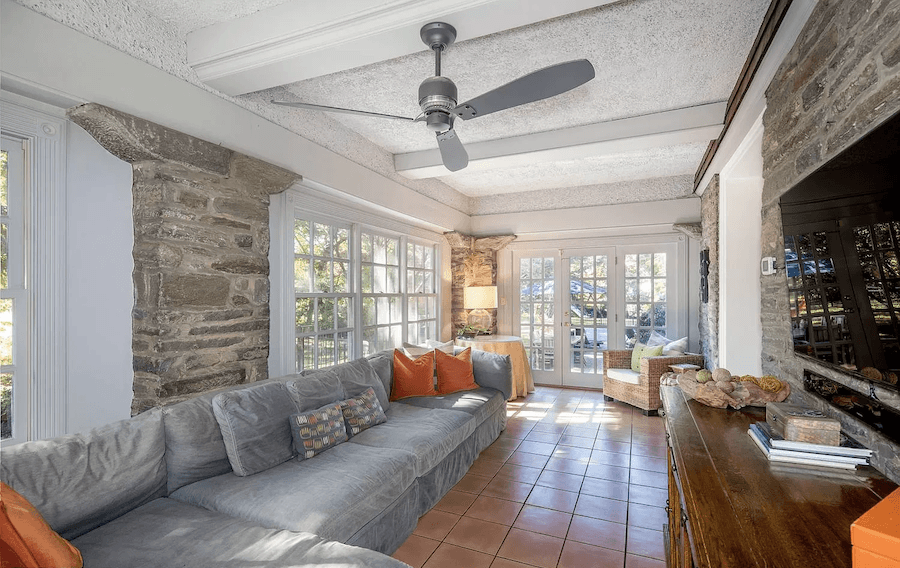 Beyond the living and dining rooms, a sun porch has been transformed into a comfortable family room. 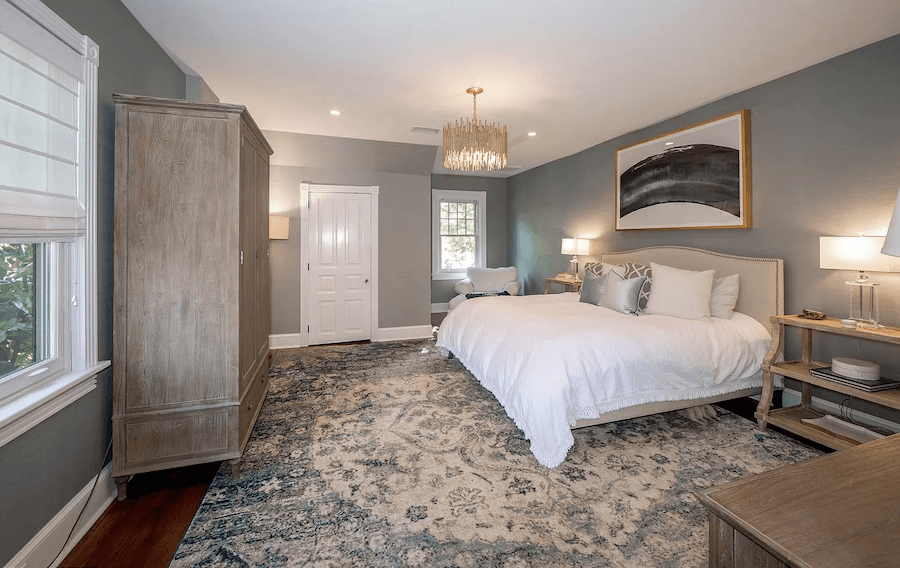 One of the two en-suite bedrooms, of course, is the owner’s bedroom. This extra-spacious bedroom connects to its bathroom via a walk-in closet and dressing area. 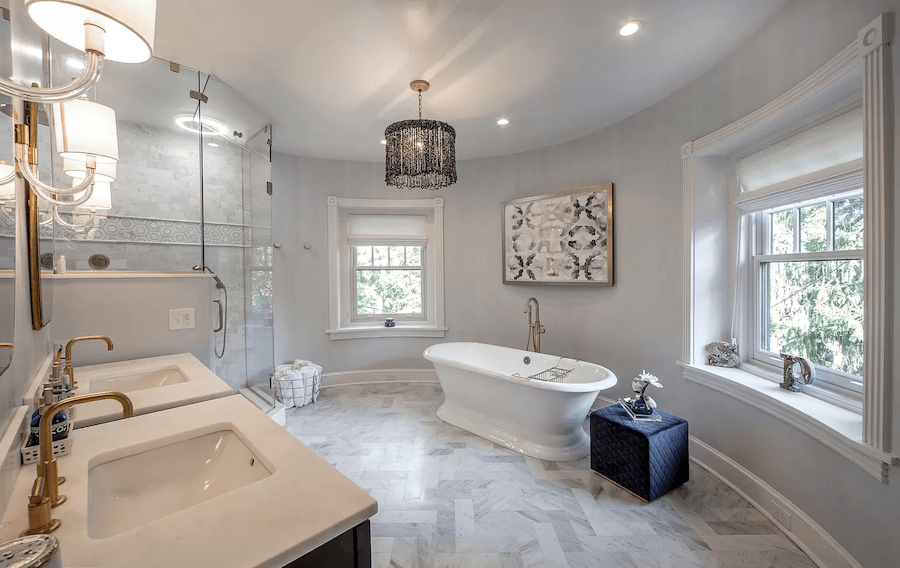 The bathroom, which occupies the turret on the second floor, boasts luxurious appointments that include a heated marble tile floor, dual vanities, a pedestal tub with a Bluetooth speaker and a shower with electronic controls for its six spray heads. 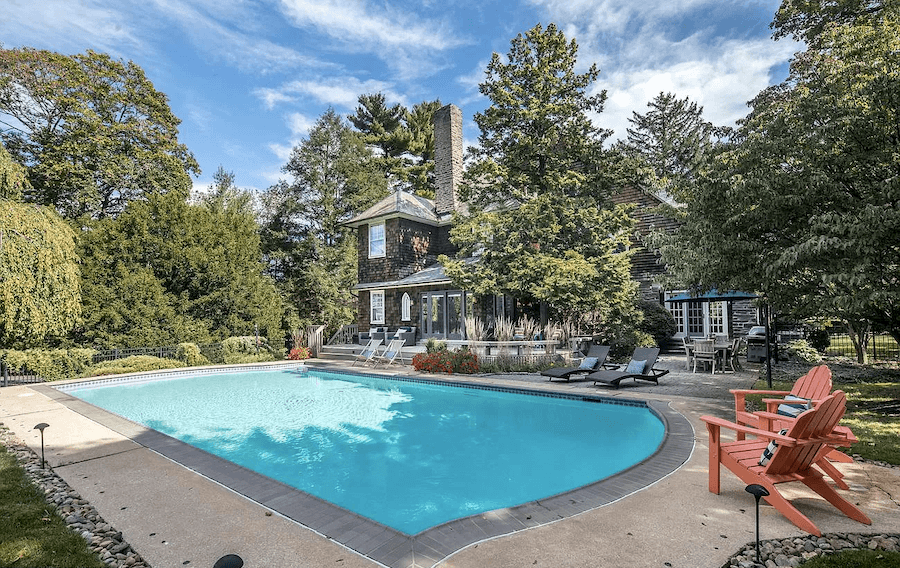 And out back, beyond the deck, an in-ground pool makes a great space for summer entertaining.

Also on the grounds are a basketball hoop and a carriage house with space above that got totally rebuilt in 1989.

And it’s all super-convenient to one of the Main Line’s liveliest and cutest downtowns: Downtown Wayne, which lies four blocks north of this Wayne Shingle Style house for sale.

Put simply, all of this is simply grand, historic and charming, and it has room enough to handle you, your family and your guests comfortably. But if you don’t think it does, read on.

OTHER STUFF: The sale price includes construction drawings worth $40,000 that would allow you to significantly expand this house and add two more parking spaces plus additional living space to the carriage house. Reinforced beams in the porte-cochere also allow you to turn the bedroom over the front porch into a second master suite by adding a sitting room and full bath. This house’s sale price has been reduced since it was relisted in late April, by $100,000 on June 16th.

Updated July 9th, 8:43 a.m., to remove an incorrect reference to a homeowners association fee. The fee appeared in the Zillow listing for this house in error. This house has no HOA fee.